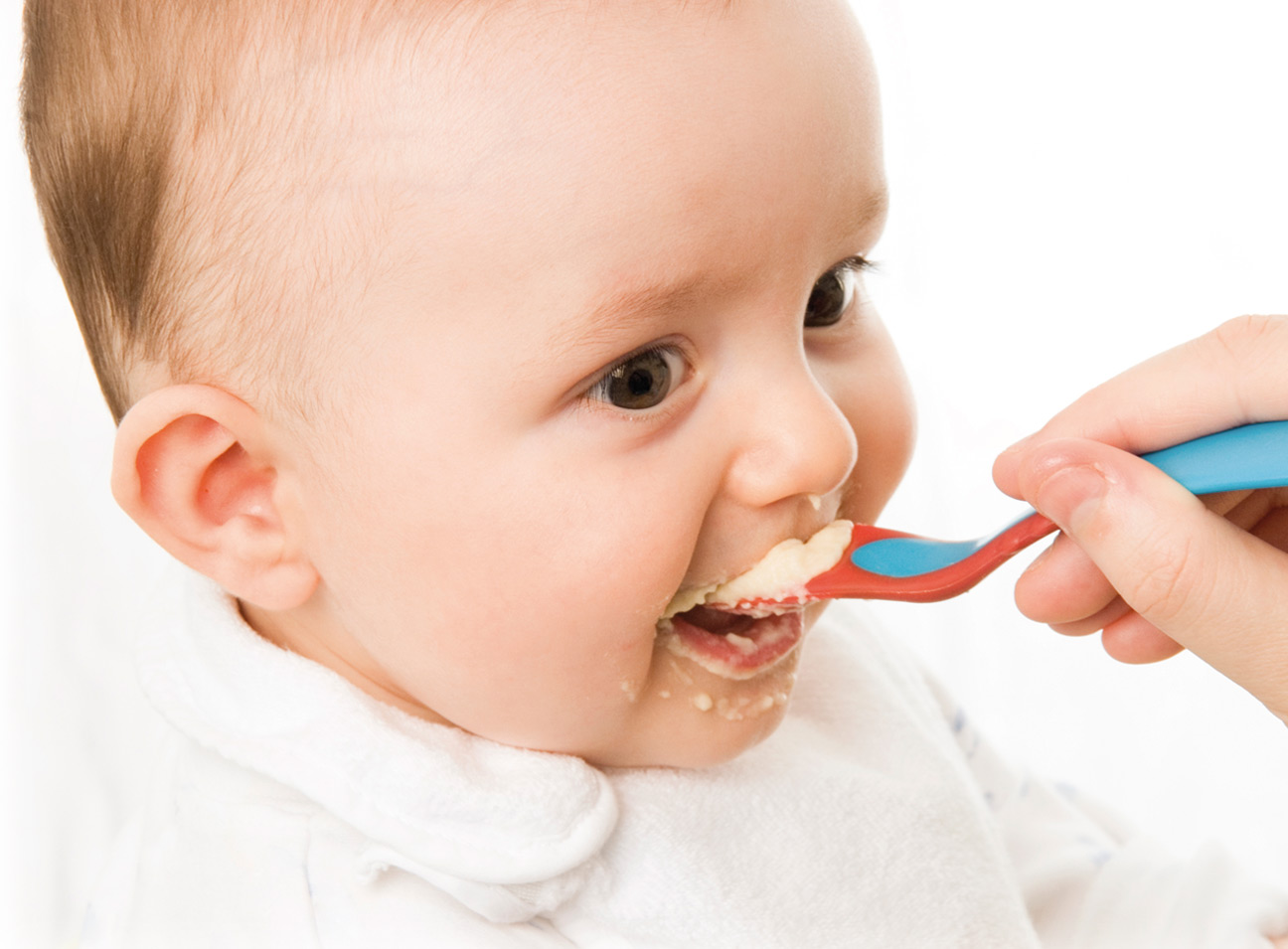 They are natural and part of the biosphere, but they are toxic for humans and animals – mycotoxins are metabolic products of lower fungi, which also include molds. They are formed during improper storage of food or feed materials, or under adverse conditions such as increased humidity or elevated temperatures before harvest in the field. Since acute poisoning rarely occurs, these substances attract little attention.

Although very high levels of mycotoxins can act acutely toxic, the highest hazard potential, however, lurks in their carcinogenicity, mutagenicity and teratogenicity when taking up low quantities over an extended period of time. Furthermore, it has to be assumed that the accumulation of mycotoxins in the human body is responsible for the development of organ diseases such as nerve, kidney, liver and heart damages.

Contamination with fungi or their mycotoxins in the field or during storage is a serious problem, also for agriculture worldwide. According to estimation of the Food and Agriculture organizations of the United Nations (FAO) up to 25% of the world production of grains and derived staple foods are infested with mycotoxin producing fungi. Mainly grains, oily seeds and nuts, coffee, fruits, vegetables as well as spices are affected.

Since 2006, uniform maximum levels in certain foods have been applied in Europe for the protection of consumers. These maximum levels are dependent on the toxicity of the mycotoxin as well as on the intended use of the food. Processing into baby food is particularly critical, as these little consumers have special needs. The body of a small child is particularly sensitive to toxic compounds, because of their low body weight, their higher metabolic rate and their poorly developed ability to detoxify contaminants and foreign substances (xenobiotics). The European Commission has, therefore, specified very low limits, especially for infant and child nutrition.

A sensitive analysis for the protection of very young consumers is therefore essential. This application presents a new method for ultra-fast analysis of mycotoxins in various types of baby food using the LCMS-8050 triple-quadrupole mass spectrometer. The following foods were examined in detail: powder for the preparation of baby milk, milk thickening cereals, flour, rice and tapioca, as well as a vegetable purées mixed with cereals.

Sample preparation:
20 mL of a water-acetonitrile mixture (volume ratio 1:1) was added to the homogenized sample (5 g), treated for 5 minutes in an ultrasonic bath and subsequently agitated for additional 30 minutes at room temperature. After centrifugation (3,000 g, 10 min.), the supernatant was diluted with water (volume ratio 1:4). The extraction columns (Isolute® Myco, Biotage, Sweden; 60 mg / 3 mL) were first conditioned with 2 mL acetonitrile and then with 2 mL water. 3 mL of the diluted supernatant were transferred onto the extraction column at the lowest possible flow rate.

This was followed by two washing steps, first with 3 mL of water, followed by 3 mL water-acetonitrile (volume ratio 9:1). After drying, the components were eluted stepwise from the column, starting with 2 mL acetonitrile, acidified with 0.1 % formic acid, followed by 2 mL methanol. The eluate was evaporated to complete dryness at 35 °C under nitrogen (Turbovap, Biotage, Sweden). The sample was mixed with 150 µL of a solvent mixture (water/methanol/acetonitrile at a volume ratio of 80:10:10 and 0.1 % formic acid).

LC-MS/MS analysis:
The extract was analyzed using a Nexera X2 UHPLC system (Shimadzu, Japan) coupled to Shimadzu’s LCMS-8050 triple-quadrupole mass spectrometer. Sample analysis was carried out in the MRM mode (Multiple Reaction Monitoring) with two transitions per component. The parameters of the ion source and the interface, i.e. gas flows, voltages and temperatures, were carefully optimized, so that due to their synergistic effect, the optimal sensitivity could be achieved with the LCMS-8050. Parameter optimization is important especially for the critical analytes, in this case the aflatoxins.

45 mycotoxins in less than nine minutes

Figure 1 shows the chromatogram of a mycotoxin standard with a concentration of 2 ppb for the aflatoxins (B1, B2, G1, G2, M1) and ochratoxin A and B, as well as 50 ppb for the remaining mycotoxins. 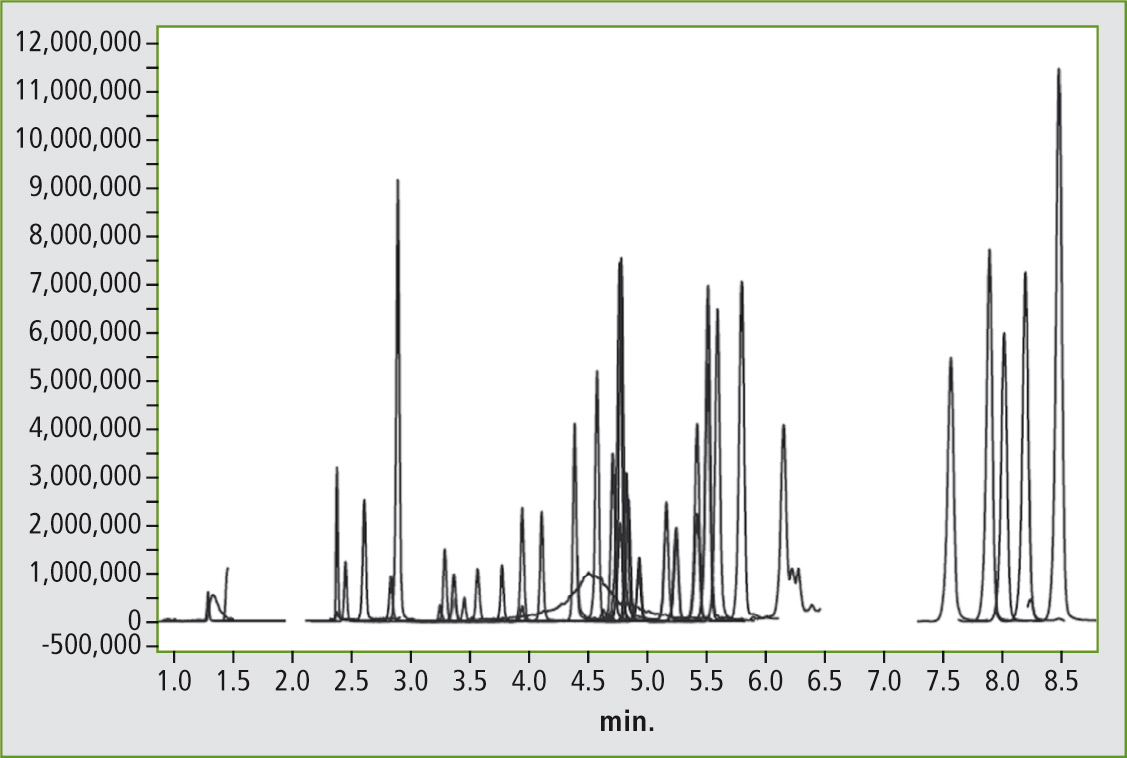 Figure 1: Chromatogram of a mycotoxin standard with 45 components at a concentration of 50 ppb (2 ppb for the aflatoxins and ochratoxins)

As criterion for the quality of the analysis method, the recovery rates of the sample preparation (extraction recovery) were determined, as well as the matrix effect during ionization (ionization recovery) for the aflatoxins. The measurements were carried out in 3 different matrices. Table 1 lists the values for vegetable-grain purée (comparison of the peak areas of matrix spiked with standards before or after extraction, as well as the comparison with the peak areas of a pure standard solution).

Table 1: Recovery rates of the aflatoxins in vegetable-grain purée

The results for the recovery rates in the two other matrices (baby milk powder, milk thickening cereals) do not differ much from the values listed in table 1. In addition, the reproducibility of the analysis results was investigated. Figure 2 shows the good reproducibility (n = 4) of the aflatoxins at a concentration of 0.1 ppb in the matrix (matrix in this example: milk thickening cereals). 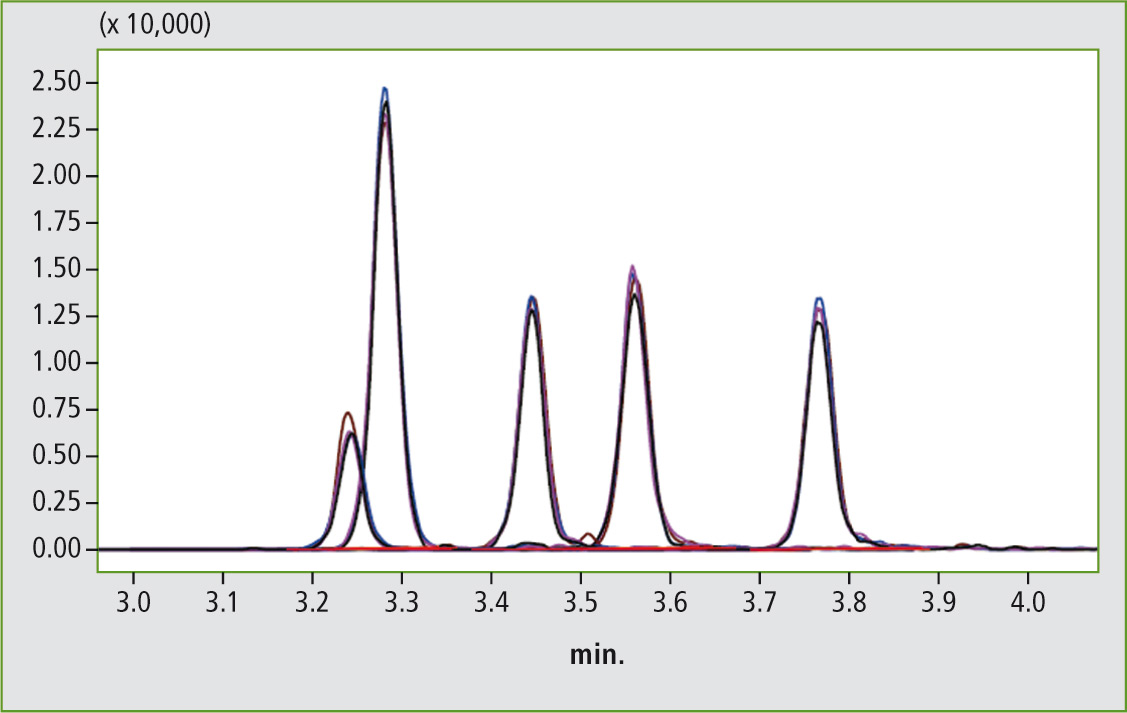 Figure 2: Comparison of the zoomed chromatogram overlay shows the reproducibility (n = 4) for 5 aflatoxins (c = 0.1 ppb) in grain flour, which is added to infant milk as a thickening agent 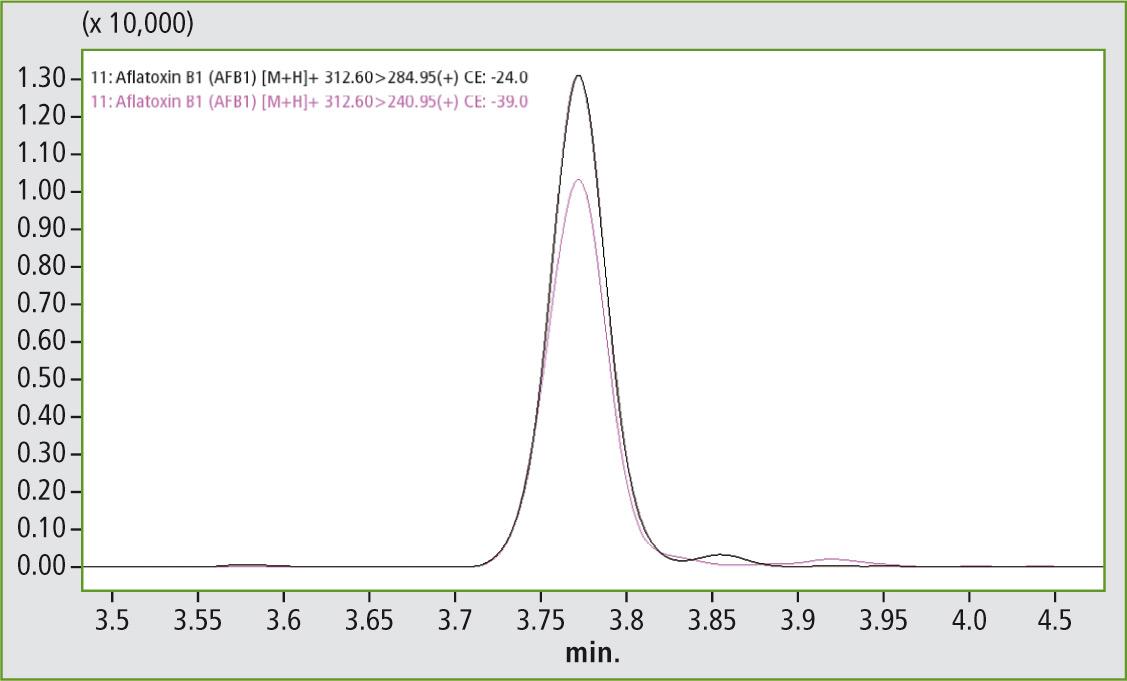 Figure 3: Aflatoxin B1 at a concentration of 0.2 ppb 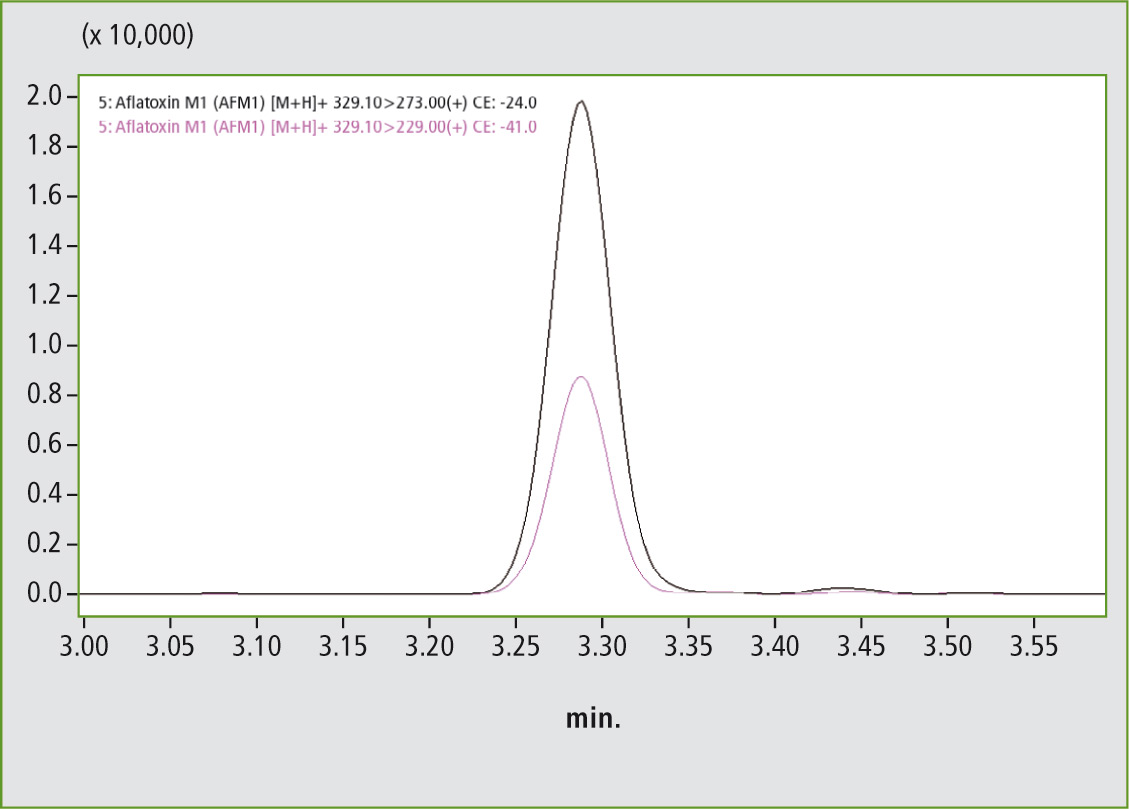 Figure 4: Aflatoxin M1 at a concentration of 0.2 ppb

Because of its high toxic and carcinogenic potential, reliable and sensitive determination of mycotoxins is essential, especially for the protection of infants and young children.

The present application describes a reliable method for the quantification of 45 mycotoxins in baby food. With the ultrafast scan rates of the LCMS-8050 and a polarity change of only 5 ms, the analysis takes less than nine minutes. Recovery rates and reproducibility measurements in three different baby foods illustrate the reliability of the method.

History and discovery of mycotoxins
Older than mankind and widespread all over the world, toxins of molds have attracted the interest of researchers not till recent decades. Already in the Bible, there are reports on a disease that occurs after ingesting ergot. And in the Middle Ages, hundreds and thousands fell victim to this disease that is known today as ergotism (St. Anthony’s fire). Even mysterious phenomena in history, such as the decline of many advanced civilizations or mystic deaths of about 30 persons that were involved in the opening and exploration of the tomb of the Egyptian pharaoh Tutankhamun, can most likely be traced back to acute mycotoxin poisoning.

Also in recent times, there have been repeated reports on initially mysterious diseases that were later associated with the deadly effect of molds. For instance, at the beginning of the 20 th century, a disease caused by the fusarium fungus (in moldy sorghum and wheat) was mentioned in the former Soviet Union, that probably first appeared in the year 1891 and took hundreds and thousands human lives until the end of World War II (source: Determination of aflatoxins and patulin using online SPE-LC by Andreas Sascha Wendt).

The first mycotoxins were discovered and identified not until in 1961 the cause of the mysterious death of 100,000 turkey poults was investigated in England. After an intensive search, the researchers encountered aftlatoxins in the moldy animal feed. During the following years, there was a virtual explosion of discoveries of new toxic metabolites of molds. That these compounds could also be present in human nutrition and be the cause of diseases only became evident over time, when optimized analytical methods and modern instrument technology became available that enabled sensitive and fast monitoring of foods and food ingredients.

So far, approximately 300 different mycotoxins are known that are produced by more than 250 molds during their growth (source: German Federal Institute for Risk Assessment – BfR, Bundesinstitut für Risikobewertung). Of these, only some are relevant for food and feed safety. These include:

Mycotoxins are not visible and may remain in foods, even after removal of the fungi. Highly processed foods, in which detection of any fungi is often very difficult or no longer possible, may still contain mycotoxins. Conversely, foods that on visual inspection are clearly infested with fungi do not necessarily contain mycotoxins, although consumption is strongly discouraged.

As mycotoxins are chemically very stable compounds and thermally stable up to very high temperatures, they are generally not destroyed during food processing. A so-called ‘carry-over’ effect is found in farm animals that have consumed toxin-containing feeds. Certain mycotoxins can be deposited in unchanged or metabolized form in various organs or can be excreted.

This way, mycotoxins get into foods of animal origin (meats, eggs, milk, milk products) without the product being moldy itself. Also this type of contamination is not externally recognizable. Using sensitive analytical instrumentation, however, detection and identification is possible even at extremely low concentrations.