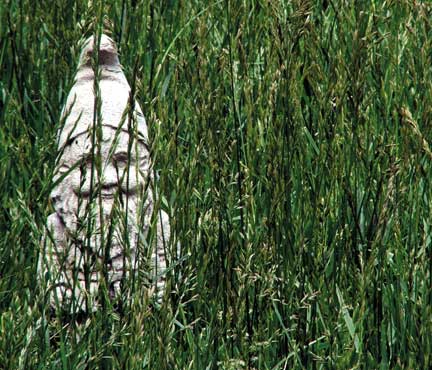 What do white tattoo ink, milk, toothpaste and lines on tennis courts have in common?

In all cases, TiO2 (titanium dioxide) is used as white pigment. In everyday use, it can be found nearly everywhere – in paints, coatings, plastics, papers, inks, medicines as well as in toothpaste. It is the widest used white pigment due to its brightness and very high refractive index of 2.7.

However, TiO2 is not only used as a white pigment. It is also a photocatalyst under ultraviolet (UV) light – and under visible light if it is doped with nitrogen ions or with metal oxides. The photocatalyst TiO2 captures ultraviolet light and forms activated oxygen from water or oxygen in the air. The activated oxygen is strong enough to oxidize and decompose organic materials and smelling gas. Photocatalyst coating technology therefore adds advanced functions to building materials, for instance sterilizing, deodorizing and anti-fouling.

TiO2 is produced in varying particle sizes, is oil and water dispersable, and as varying coatings depending on the application field and industry.

Most laser diffraction particle size analyzers on the market are equipped with several light sources and/or detectors. Using such instruments is problematic since detectors or the light source have to be switched if the entire measurement range is to be covered. Switching needs time, recalibration is needed and the quality of measurement data is poor in the overlapping areas of the detectors.

Figure 1 shows an example of a particle size distribution using the Shimadzu SALD-7101 Particle Size Analyzer. This setup features a perfect seamless and wide measuring range. There are no points of discontinuity over the entire measuring range because just a single light source, a single optical system and a single measurement theory are needed. This method is perfectly suited for larger particles starting from 10 nm up to a range of a few millimeters. 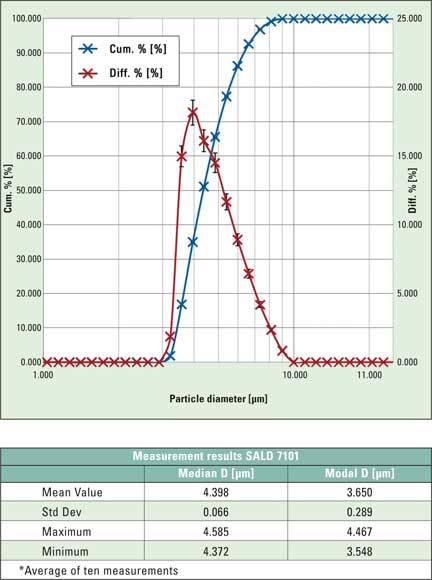 Dynamic light scattering (DLS) is the conventional method for measuring particles in the range of a few nanometers. However light scattered by particles decreases sharply for particle sizes of less than 100 nm. The IG method, developed by Shimadzu, uses diffracted light instead of scattered light, and is free from these physical restrictions. Furthermore, it does not require input of the refractive index as a measurement condition.

The IG method uses specific electrodes dipped into the sample solution. A laser passes through the electrodes. If an electrical field is applied to the electrodes, particles are “trapped” between the free spaces of the electrodes resulting in a diffraction pattern. With dielectrophoresis switched off, the particles diffuse back into solution and the detected diffracted light intensity decays, based on the difference in diffusion velocities of large (slow) and small (fast) particles.

This method enables stable measurements with excellent reproducibilities, particularly in the single nano range. It is virtually resistant to contamination and even to the presence of small foreign particles. Special requirements of ambient air quality as well as sample filtration are therefore unnecessary. Measurements can also be carried out without any problems in many different solvents.

Figure 2 shows an example of a particle size distribution measured with the IG-1000. The critical range of measurements less than 10 nm is thereby extended. 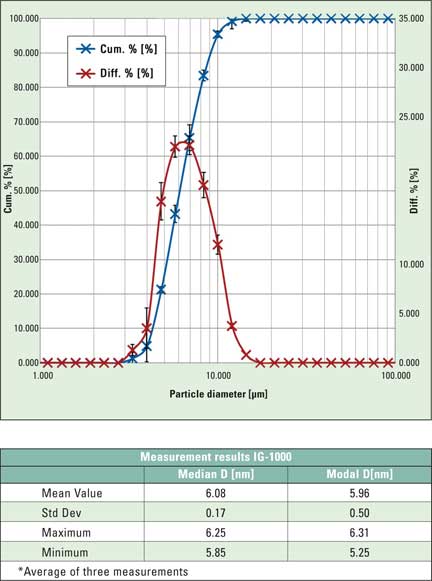 Is TiO2 a white giant or white dwarf?

Both. TiO2 has a “giant” application field and is used as a white pigment or as a photocatalyst. Depending on the application field, the size range of the particles differs. Sometimes the particle diameter is in the range of nanometers, and sometimes in the range of micrometers. Sophisticated and advanced tools like the new Shimadzu IG-1000 and the SALD series help in determining particle size distributions as accurately as possible.