A granular look at sugar

Use of novel analysis methods 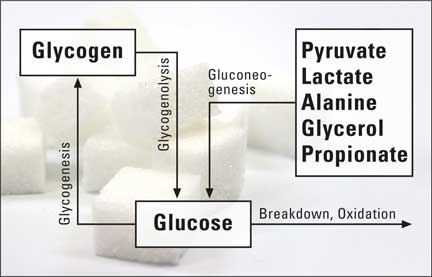 Our experience with sugar starts in early childhood – since breast milk contains lactose. Human sensory perception alone is, however, not enough to properly assess the useful but also potentially harmful effects of an age-old sweetener (saccharose). Nutrition researchers and physicians have, for this reason, been focusing attention for some time on sugar compounds, particularly glucose.

Significant progress in metabolic research on sugar could, however, only be achieved through the availability of novel analytical methods. With its GC-MS (gas chromatography-mass spectrometry) systems Shimadzu opens new ways to measure glucose metabolism in humans and animals with high precision, based on analytical expertise developed over decades.

Much is already known about glucose, one of the components of household sugar. Daily glucose requirement of adults is approximately 180 g, of which the brain is the largest ‘consumer’, requiring 80 % of this amount for its energy supply. For this reason, glucose must be newly synthesized during short-term periods of starvation. This process is called gluconeogenesis. It takes place in the liver and in the renal cortex as well as in the intestine. Substrates are pyruvate, lactate, glycerol, alanine and, in ruminants, propionate. Excess glucose is stored in the body as glycogen and can be converted back to glucose when needed, for instance during physical activity.

Glucose concentration of blood (normally 90 – 110 mg/mL in human adults) mirrors the ‘static’ component of glucose metabolism. However, the causes of increased or decreased glucose level remain unclear. The synthesis rate of glucose and its consumption for the production of energy or conversion to other metabolites is unknown. These processes can be elucidated using special labeling techniques that incorporate chemical probes, so-called ‘tracers’.

To monitor the dynamics of glucose metabolism (i.e. its synthesis and breakdown), it is useful to incorporate a labeled glucose tracer into the body’s metabolism. But how can such a glucose tracer be produced? For the elements hydrogen, carbon and oxygen contained in glucose (molecular formula: C6H12O6), nature offers different heavy elements, so-called isotopes, which are suitable for use as labels. For hydrogen there is the stable, non-radioactive protium isotope with mass 1 (symbol 1H) and deuterium with mass 2 (symbol 2H, or D in short). For carbon, there are two stable isotopes: 12C and 13C.

The natural abundance of these heavy stable isotopes in glucose is very low. Out of 1,000 glucose molecules, only one contains deuterium bound to one of the six carbon atoms. By drinking a small amount of heavy water (D2O), the deuterium content in glucose molecules increases relative to the natural level, thus producing ‘labeled’ (‘enriched’) glucose that differs from ‘normal’ glucose. The so-called D2O (‘heavy water’) method outlined below shows how gluconeogenesis (in g glucose/day) can be determined after deuterium enrichment of glucose.

The D2O method is based on the fact that, after oral intake of D2O (0.6 g per kg body weight) with a deuterium content of > 50 %, a rapid distribution in the body water pool (equivalent to approximately 60 % of the body weight) initially takes place. As a result of enzymatic reactions, deuterium atoms present in water molecules are subsequently incorporated in glucose molecules. The difference between the deuterium content at carbon atom C2 and the other C-atoms provides information on specific metabolic pathways. The deuterium content in the different molecular positions can be measured via the aldonitrile pentaacetate derivative of blood glucose using GC-MS.

The D-enrichment at C2, E(C2), is proportional to the total glucose produced in the body (GP), i.e. the sum of newly synthesized glucose and ‘old’ glucose generated from glycogen breakdown. The D-enrichment at carbon C5, E(C5), is an indicator of newly synthesized glucose. Due to enzymatic exchange reactions, D-enrichment at the other carbon atoms (with exception of C2) is similarly high. Consequently, the relative gluconeogenesis GNGrel (in % of the glucose production GP) and the absolute GNGabs can be calculated as follows:

Glucose production (GP) is determined in a separate study, for instance using deuterated glucose which possesses two D-atoms at carbon C6. The factor three in equation (1) results from a total of 3 H-atoms or three D-atoms being bound to glucose carbon atoms C5 and C6 (see figure 2). 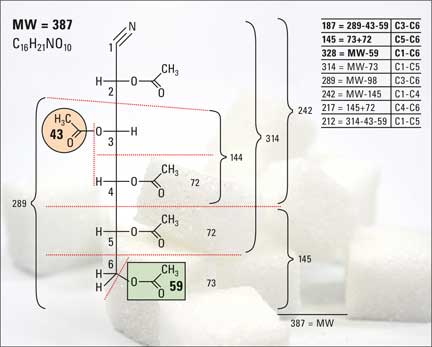 The D-enrichment E(C5)+E(C6) and E(C2) can be determined with relatively little analytical effort from the mass fragments m/z 145 (C5-C6), 187 (C3-C6) and 328 (C1-C6) of the derivatized glucose using GC-MS (Junghans et al., 2010). The peak intensities of the mass fragments with their so-called isotopomers M+1, M+2 and M+3 (incorporation of 1, 2 or 3 deuterium atoms per glucose molecule) required for the calculation, can be obtained from the EI and PCI spectrum of aldonitrile pentaacetate derivative of glucose (figure 3). 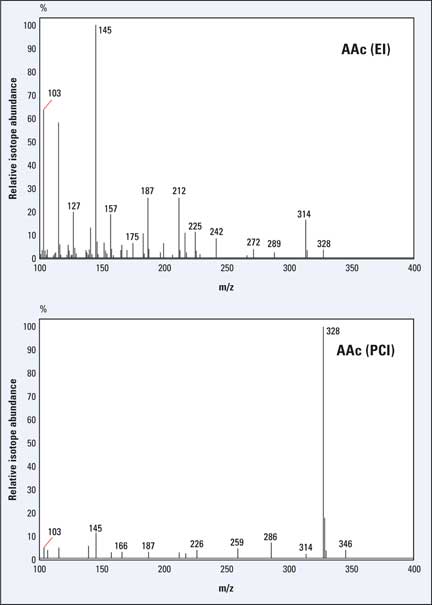 Interference of the m/z 145 fragment with another fragment is avoided by using a different glucose derivative.

Does the deuterium isotope in the D2O method constitute a health hazard to humans and animals? The answer is no! For two reasons:

Chemical properties of glucose and its metabolism as well as glucose-related metabolism are not changed by deuterium labeling, as only approximately 1 % of the glucose molecules are labeled.
Isotopes of heavy and light hydrogen (D and 1H) are stable and, therefore, non-radioactive. They are completely harmless, even for small children and pregnant women.

The stable isotope labeling technique discussed above, in combination with sensitive and accurate GC-MS analysis methods, provides significant advantages over the radioactive labeling techniques used in the past. In-vivo gluconeogenesis can be determined without putting the study subject (human or animal) or the environment at risk. The sample material, with respect to labeling, is indefinitely stable, since no radioactive decay takes place.