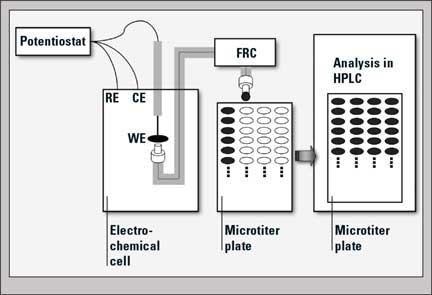 This limitation of a direct combination of voltammetry and chromatographic techniques, especially HPLC, has driven us to a new approach using a Shimadzu “fraction collector” equipped with an in-house designed micron-sized sample collecting tip for rapid sample collection close to the electrode surface during voltammetry, with subsequent analysis of sample fractions in an HPLC system. This idea has been applied to glycerol electro-oxidation on platinum electrode in alkaline media, and concentration changes of glycerol and its reaction products can be visualized in good correspondence with voltammograms. This straightforward but novel combination of cyclic voltammetry with HPLC has great promise for the study of complicated multi-product electrochemical reactions.

During the voltammetry, reaction volumes of 60 µL each were collected on a 96-well microtiter plate using a Shimadzu Fraction Collector (FRC-10A with LC-20AT pump) with a sampling tip positioned close to the electrode surface, and analyzed by high-performance liquid chromatography (Shimadzu prominence HPLC) with an Aminex HPX 87-H (Bio-Rad) column and 5 mM sulfuric acid as eluent. Column temperature was maintained at 30 °C in the column oven (CTO-20A) and the separated compounds were detected with a refractive index detector (RID-10A).

A typical result for glycerol oxidation on platinum in 0.1 M NaOH is shown in figure 2. Figure 2a shows the voltammetric curves both in the absence (dashed line) and presence (solid line) of on-line sample collection. 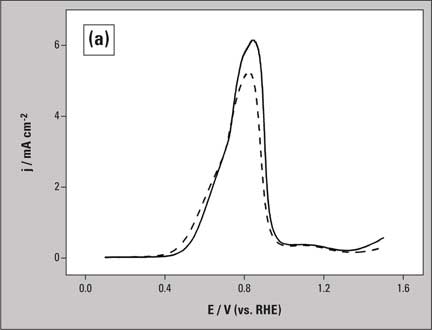 Figure 2a: Voltammogram of glycerol oxidation (0.1 M) on Pt electrode with (solid line) and without (dashed line) sample collection in 0.1 M NaOH. Scan rate is 1 mV/s.

Samples collected on microtiter plate during the voltammetry are analyzed in the HPLC system and many peaks are observed in the chromatograms (Figure 2b), and are converted to their corresponding concentrations (Figure 2c). In the case of glycerol oxidation, the scan rate of voltammetry and flow rate of sample collection were optimized at 1 mV/s and 60 µL/min respectively. Each data point in figure 2c therefore represents the average concentration over a 60 mV potential range. Figures 2b and 2c clearly show five different soluble products formed during the glycerol oxidation, as indicated in the figure caption. More detailed information as well as a comparison with the same reaction on a gold electrode is available in reference 1. 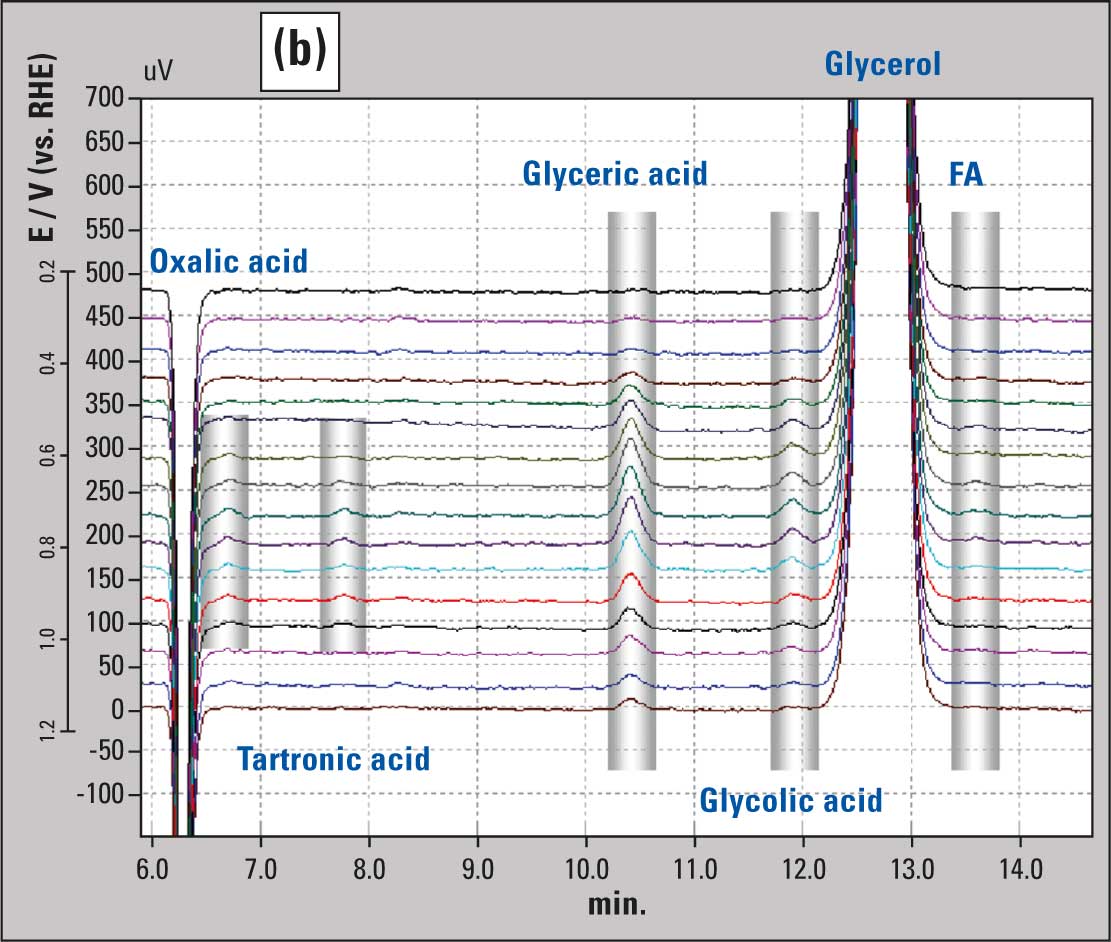 Figure 2b: Chromatogram from HPLC analysis at 30 °C with samples collected during voltammetry. 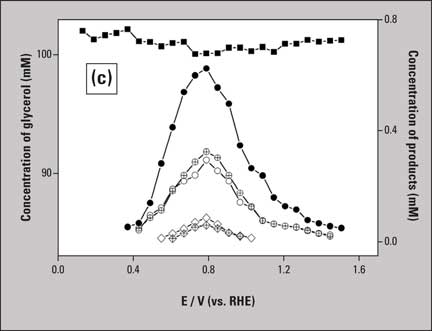 Figure 2c: Plots showing the concentrations of glycerol and its electro-oxidation by-products as a function of potential:

It was demonstrated the combination of voltammetry with a chromatographic technique using fraction collector for online sample collecting during voltammetry, with subsequent sample analysis in an HPLC system. When applying this method to glycerol oxidation on a platinum electrode in alkaline media, various reaction products are detected and correspond well with the current profile simultaneously obtained using voltammetry. It is expected that this combination will enable new insights into many other multi-electron electrochemical reactions producing soluble intermediates and products.