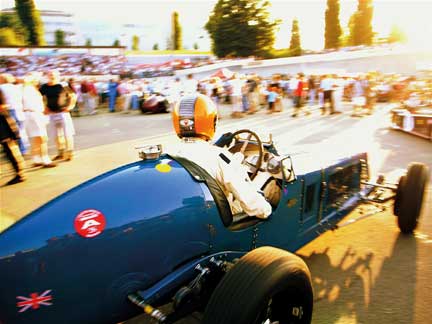 The determination of additive elements, wear metals and contaminants in used lubricating oils is a typical routine method in inductively coupled plasma optical emission spectrometry (ICP-OES). This analytical method helps to determine component wear. The ICPE-9000 (Figure 1) is a simultaneous vacuum ICP-OES spectrometer, allowing analysis of any element in the wavelength range of 167 nm to 860 nm. The instrument is equipped with a highly sophisticated Echelle optical system and CCD detector allowing multi-element analysis including the determination of sodium and potassium. 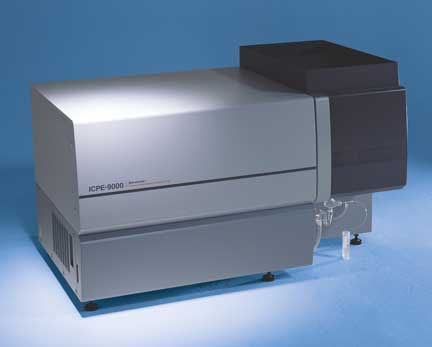 International standard methods such as ASTM 5185 describe determination of elements such as calcium, magnesium, phosphorus, sulfur and zinc based on oil soluble metals for calibration.

Where does oil contamination come from?

Wear metals such as copper and iron may indicate wear in an engine or any oil wetted compartment. Boron, silicon or sodium may indicate contamination from dirt or antifreeze leading to failure. Additive elements such as calcium, phosphorus and zinc are analyzed for depletion and subsequent wear since these elements play a key role in lubrication characteristics. Routine monitoring of metals in lubricating oils is very important since it not only reduces the expense of routinely dismantling components for visual inspection, but can also indicate unexpected wear prior to component failure.

High sample throughput as well as easy handling of the system configuration is essential for routine oil analysis laboratories. The wavelength flexibility of the ICPE-9000 system allows users to add new elements easily with each change of oil program. Since all multi-element information is stored on a chip and available at all times, it is possible even after the analytical run to compare different wavelengths in order to optimize the method. The assistant functions of ICPE solution software support the user during wavelength selection and set the optimum lines automatically. Spectral interferences are compensated by inter-element correction standards as the software implements a total of more than 110,000 spectral lines. Another benefit of the ICPE-9000 system for oil analysis is the vertical torch position, which allows long analytical sequences without precipitation or clogging.

The system setup for oil determinations includes an optional oxygen kit consisting of an optimized organic solvent torch (Figure 2) which allows the inlet of an argon/oxygen gas mixture. For sample aspiration the ambient temperature Scott type chamber with a coaxial nebulizer has been used. The instrument is equipped with a dual view observation mode which allows the determination of all elements in axial as well as radial view in one analytical run. The instrumental parameters for the determination of oil samples are listed in table 1. 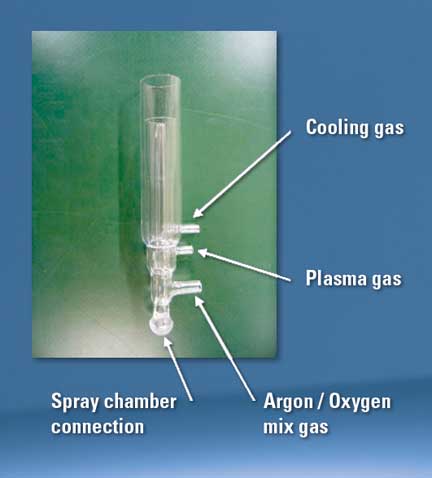 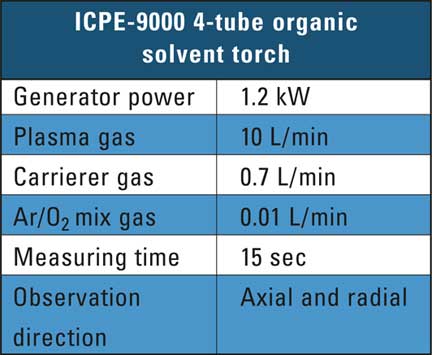 All standard and sample solutions were prepared in the same way using xylene as a solvent and blank standard oil to adjust the viscosities.

The ICPE-9000 in the organic mode using the optional oxygen kit is an effective tool for the analysis of wear and additive metals in oils. The experimental data corresponds well with the certified data of the reference sample. In addition to the major elements in radial view, ICPE-9000 can also determine trace element concentrations in the oils at the same time in axial view. The method is robust and can be fully automated in combination with the ASC-6100 autosampler.

Oil keeps the motor running. Understanding the sources of wear material in oil helps to increase the quality of lubricants which extend the lifetime cycle of an engine. This is important and reassuring, e.g. at Indy 500, when the drivers get the order: “Gentlemen, start your engines!”