Is RoHS to blame for rust formation? 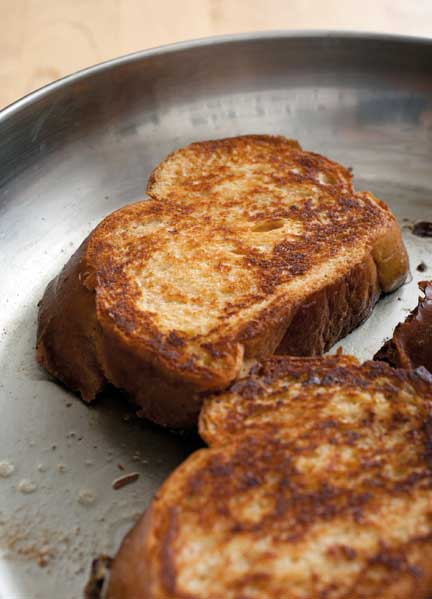 Flash rust or batter coating? Rusty knights* have nothing in common with rusty cookware.

How can this be? After just a few weeks, the new ‘stainless steel’ cookware set shows rust spots – on the bottom, the grip or the lid. Do they occur from flash rust, defective material or flawed manufacturing processes?

To protect stainless steel from corrosion, a chromium – more precisely hexavalent chromium – protective layer has been used in the past. However, Cr (VI) is highly toxic, mutagenic and carcinogenic. Its use is therefore strongly regulated in the 2001/ 95/EG RoHS (restriction of hazardous substances) directive. In Germany, the RoHS directive as well as the EU directive WEEE (Waste Electrical and Electronic Equipment) came into effect in German law in March 2005 with the implementation of the Electrical and Electronic Equipment Act (ElektroG). The transition period for the manufacturers and industries involved ended in July 2006. Today, all electronic products must therefore be RoHS compliant.

However, this directive does not just impact the electronics industry. For instance, a fastener manufacturer cannot know in the manufacturing process, what a screw will subsequently be used for. This is why the use of Cr (VI) in the production of fasteners is increasingly being discontinued.

To protect steel from corrosion, dozens of non-metallic and metallic coating as well as combination coating processes can be used instead of Cr (VI). Some of these are, for example:

Let us take a closer look at rust. 18/10 stainless steel, often used in the manufacturing of cookware is a metal alloy consisting of 18 % chromium and 10 % nickel. Since Chromium is present in its metallic form (oxidation state 0), it is not considered to represent a health hazard.

18/10 stainless steel is in principle rustproof but not durably resistant against chloride and acids, which, in the form of kitchen salt, fruit acids or vinegar, come into contact with pots and pans.

The passive protective coating of stainless steel is durable only as long as the surface is metallically bright. When metal particles stick to the steel surface, they can cause corrosion. It is therefore advisable to avoid touching the cookware surface with steel or iron particles (especially steel scouring pads).

Non-dissolved salt particles sticking to the bottom can also attack the cookware surface. In this case, an increased chloride concentration develops locally, causing black stains on the metal surface. The chloride attack is even stronger at elevated temperatures. Only thorough cleaning will help in this case.

Figure 1 shows screws for fastening the grip of a lid. The right-hand screw already shows signs of severe corrosion after just a few weeks of service. It is remarkable that the surrounding material has remained rust-free. 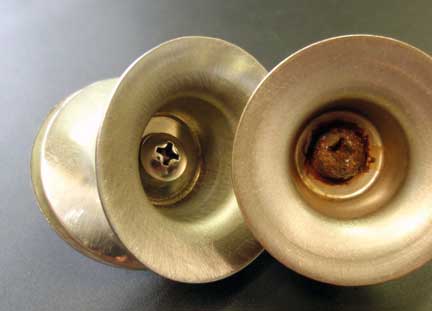 The left-hand screw is a replacement part from the cookware manufacturer. Rusting may have many causes – extraneous rust caused by the use of a steel scouring pad or damage to the protective layer of the screw. But it may also be due to use of a low-priced, non corrosion-resistant screw …

Methods such as X-ray fluorescence analysis can be of value to cookware manufacturers. Using Shimadzu’s EDX-720 X-ray fluorescence spectrometer, FP-measurements (fundamental parameters) of both screws and the respective surrounding material were carried out.

The material of the corroded screw (right-hand) was found to differ markedly from the other materials analyzed. Since both screws looked identical, the cookware manufacturer could not recognize the dissimilar material properties. X-ray fluorescence is a straightforward, fast and non-destructive method enabling reliable quality control of proprietary products as well as those of suppliers.

*In some European areas French Toast is known as “Rusty Knights”, referring to their golden armor.