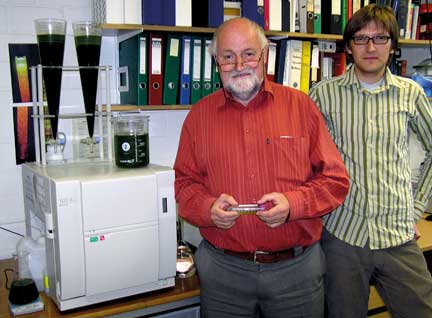 Physicists’ working with Professor Hilmar Franke at the department of ‘Applied Physics’ (University Duisburg Essen, Germany) excitement about TOC is obvious only at a second glance. The research group concentrated primarily on integrated optics and the optics of polymers. Initially via biofilm sensor technology and later when they were working on the development of an innovative lighting concept for photo-bioreactors, they turned to algae. This lighting system stands out since the lighting of the reactor actually occurs from within. Specially designed optical waveguides are used which outcouple the previously incoupled sunlight (or artificial light) to specific areas in the reactor (see figure 1).

Originally, research was centered on the development of a scalable photobioreactor (PBR) for coupling to a power plant, whereby the CO2 produced could be used for growing algae and, in turn, for the reduction of CO2 emission of the power plant. 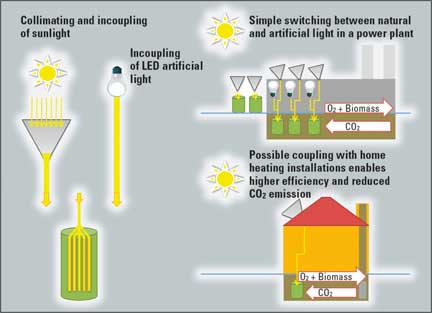 Figure 1: Assembly and possible uses for photobioreactors in power plants or as home heating installations for the reduction of CO2 emissions

The intended use of the developed PBR is, however, much greater. Algae can be efficiently grown inside a PBR, for instance for the production of biodiesel, for foods as well as for the cosmetics industry.

Since algae need a little more than just light, CO2 and water, Prof. Franke brought in the support of graduate students from the ‘Water Science’ Master’s Program. This led to the establishment of an interdisciplinary working group centering on the development of photobioreactors in close cooperation with industry. Compared to other similar projects, the focus is on research, and many new potentially innovative approaches are being pursued.

To measure the efficiency of the lighting system developed, the growth of the algae first needed to be monitored. A photometer is used to measure scattering and the absorption of chlorophyll while providing information on algal growth. On closer inspection, this common method appeared to be too inaccurate and susceptible to fluctuation. The same was true for the widely used and very complex determination of protein mass. Based on these facts, the group started to search for a parameter for algae that was relatively constant, that could be determined with little effort and low cost, and that would also be suitable for industrial monitoring.

Student Sacha Hendes (photograph below, measuring algae together with Hilmar Franke) had the idea to determine algal biomass using TOC. This idea also appealed to the Shimadzu experts, as it represented an interesting and unusual use of a TOC instrument.

After several promising test measurements in Shimadzu’s laboratories, the TOC-VCPH was selected for the development of a measurement method for the determination of algal biomass.

The 4 to 10 µm sized Chlorella vulgaris microalgae could be measured directly after sampling from the reactor without the need for further sample pretreatment. The difference method (TOC = TC – IC) was applied for biomass determination. It is suitable for all other single-celled algae which exhibit a stable carbon content under various growth conditions.

TC and TIC are determined, and the TOC is calculated from these values. Via calibration using the obtained dry mass of the algae, the mass percentage of the dry biomass can subsequently be deduced from the TOC value (see figure 2). 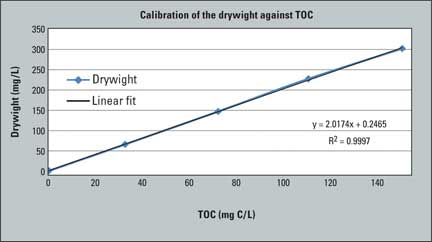 The algae sample is first measured and the TOC content is determined. The sample is subsequently filtered through a 0.2 µm syringe filter and the TOC content is remeasured. This is done in order to distinguish how much of the TOC originates from the algae and how much can possibly be attributed to extracellular substances produced by the algae or released into the nutrient solution after they die off.

In order to demonstrate the applicability for specification of algal growth, graduate student Dominik Gerhard investigated algal growth in various nutrient media using TOC in his thesis research (see figure 3). As a special cleaning measure for the TOC system when used during continuous monitoring of algae, the syringe and the sample loops must be thoroughly cleaned using a diluted hydrochloric acid solution to prevent fouling by algae. This is particularly important at the start of the weekend, as otherwise algal fouling can lead to higher measuring results. 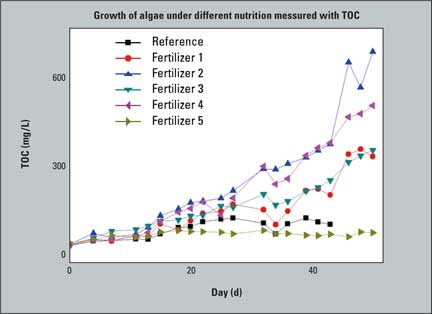 The determination of algal biomass using TOC is a new method that has proven to be highly suitable in a laboratory environment for the measurement of biomass yield in photobioreactors and for the monitoring of algal growth. In combination with other sensors, additional information on the condition of the algae can be obtained. In addition, this method can be easily modified and applied for the investigation of (micro)algal pollution in lake water.