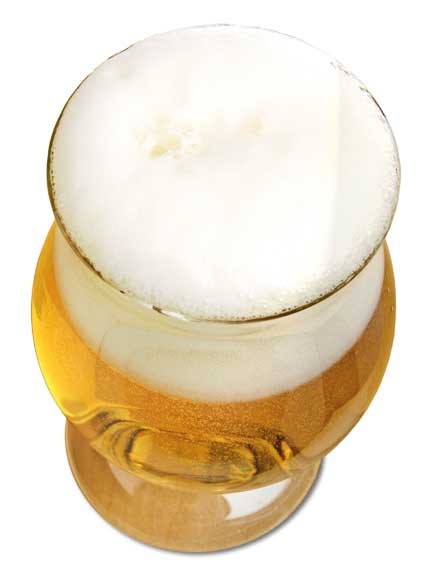 This rapid sampling technique is suitable for the analysis of beer aroma compounds. The headspace (10 mL) is passed through a microcolumn filled with 5 mg of Tenax TA and thermally desorbed in a modified GC inlet. Eight compounds (from acetaldehyde to 2-phenylethanol) in four beer samples were analyzed. The correlation coefficients (r2), repeatability (RSD) and limits of detection (LOD) were 0.9973 – 0.9994, 2.1 – 6.9 % and 0.00002 – 0.13 mg/L, respectively. The methodology can be useful for routine beer sample analysis.

Beer aroma compounds are very important as they make a major contribution to the quality of the final product. A variety of flavor compounds may arise depending on the beer type and storage conditions. Reliable and sensitive analytical methodologies are required for the extraction and analysis of a great number of beer aroma compounds, ranging from very volatile all the way to high-boiling compounds.

Several extraction/concentration methods have been employed for the analysis of beer volatiles. Headspace solid-phase micro-extraction (HS-SPME) is a simple, fast, sensitive and solvent-free extraction technique that enables the extraction and concentration steps to be performed simultaneously [2-5]. However, the HS-SPME method, using the syringe with a fiber or solvent extraction method, is not appropriate for the analysis of very volatile beer aroma compounds especially acetaldehyde, in view of its pungent odor.

Headspace solid-phase microcolumn extraction (HS-SPMCE) is a useful analytical tool for the analysis of both very volatile and high-boiling compounds. Among volatiles, HS-SPMCE has been successfully used for the quantitative analysis of vinyl chloride in water [6], chloroform in urine [7] and benzene in air [8]. The aim of this work was to demonstrate the performance of HS-SPMCE for the quantitative analysis of both very volatile and higher-boiling beer aroma compounds within one sample run using GC-FID.

For the analysis, a 100-mL aliquot of the beer sample was quickly transferred into a 500-mL volumetric flask containing 20 g NaCl and the flask was vigorously shaken by hand at room temperature (22 ± 1 °C). After 10 – 15 min equilibration, 10 mL of the headspace was withdrawn. The headspace content of the syringe was immediately pushed through the microcolumn (1 mm I.D., packed with 5.0 mg of 60 – 80 mesh Tenax TA). The loaded microcolumn was transferred to a modified GC inlet. The trapped aroma compounds were desorbed at 10 kPa by heating the microcolumn to 230 °C for 1 min. After desorption, the carrier gas pressure was increased to 60 kPa and the temperature program was started. During the analysis run, the microcolumn remained in the GC inlet. Analyses were carried out on a Shimadzu GC-14 with FID where the liner was replaced with a liner for the microcolumn.

Acetaldehyde, acetone, methyl acetate (representatives of very volatile compounds) and ethyl hexanoate, ethyl octanoate, ethyl decanoate and 2-phenylethanol (representatives of higher boiling beer aroma compounds) were chosen to confirm the versatility and suitability of the new HS-SPMCE method. For quantitative analysis, five-point calibration curves over the range of the following concentrations were measured: from 1 mg/L to 10 mg/L for acetaldehyde, 0.1 mg/L to 1 mg/L for acetone, methyl acetate, ethyl hexanoate, ethyl octanoate, ethyl decanoate, 2 mg/L to 20 mg/L for ethyl acetate, and 1 mg/L to 50 mg/L for 2-phenylethanol in the 4 % (V/V) of ethanol. The correlation coefficients (r2) listed in table 1 varied from 0.9983 to 0.9996.

The repeatability of the method (RSD) was in the range of 2.1 to 6.9 % (table 1). The limits of detection (LOD) and quantification (LOQ) were calculated by Adstat Calibration Program (Trilobite, Czech Republic) and show good sensitivities for the real sample analyses. 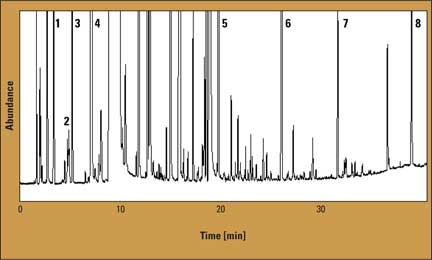 Figure 1: Chromatogram of a beer sample

As an example, the chromatogram of beer sample 1 is shown in figure 1; there are 19 peaks from very volatile compounds and 94 peaks from higher boiling compounds. Results of the quantitative analysis of four samples (mean value of two measurements) are listed in table 2. The results in table 2 indicate relatively small differences between the compositions of the studied compounds in the analyzed samples. The proposed method can be useful for the analysis of real samples. The modification of the gas chromatographic inlet for thermal desorption in the microcolumn is cost-effective, and replaces the expensive thermal desorption unit.

HS-SPMCE is a simple, fast and sensitive method for the routine analysis of aroma compounds in beer samples. Owing to the good reproducibility of the method, it can be used to compare the volatile profiles of different types of beers, study the development of a particular beer during aging, or correlate with sensory analysis results.

Acknowledgements
This work was supported by the Scientific Grant Agency of the Ministry of Education of the Slovak Republic and the Academy of Sciences, registration number 1/0786/08.