From 1895 until 1910, a sugar mill named ‘Oriente’ existed on the Caribbean island of Puerto Rico. After the mill closed, many heirloom pieces passed into the hands of the next generation and are considered to be antiques.

Now in the third generation, the question arose as to the value of the objects. Their authenticity has been confirmed. They are made either of natural materials which are now banned (ivory for instance, under the so-called ‘Washington Convention’, the Convention on International Trade in Endangered Species of Wild Fauna and Flora) or of materials that have been replaced by less flammable, cheaper or possibly more durable substances.

Age and authenticity are criteria used to classify these objects as antiquities. For age the following applies: the object must be at least 100 years old. Occasionally, more than 50 years has been specified.

The use of historical materials can be a criterion for classifying objects as genuine antiques and determining that they are not an imitation. Table 1 provides a list of ‘plastic’ materials from the past. Natural materials such as rubber, linseed oil or casein have been used. Cellulose and nitric acid were used to produce the first artificial silk (nitrocellulose). This type of silk was also known as Chardonnet silk.

By the addition of camphor as a solvent, it was possible to produce the first thermoplastics (celluloid) from nitrocellulose. They were not as highly flammable and were used in the production of many consumer goods or as substitute materials (imitations) in the manufacture of objects that would otherwise be made of ivory, amber, horn or mother-of-pearl.

Celluloid or mother-of-pearl or?

The small folding ruler (with metric and inch scale) shown in figure 1 was made by the company Aitken & Co. Aitken, as well as Mirrless Watson from Glasgow, supplied machinery to sugar mills in the United States around 1900. In this way the folding ruler travelled from Scotland via New York to Arecibo, Puerto Rico to the Oriente sugar mill and later on, after the mill was sold, to Bremen, Germany. 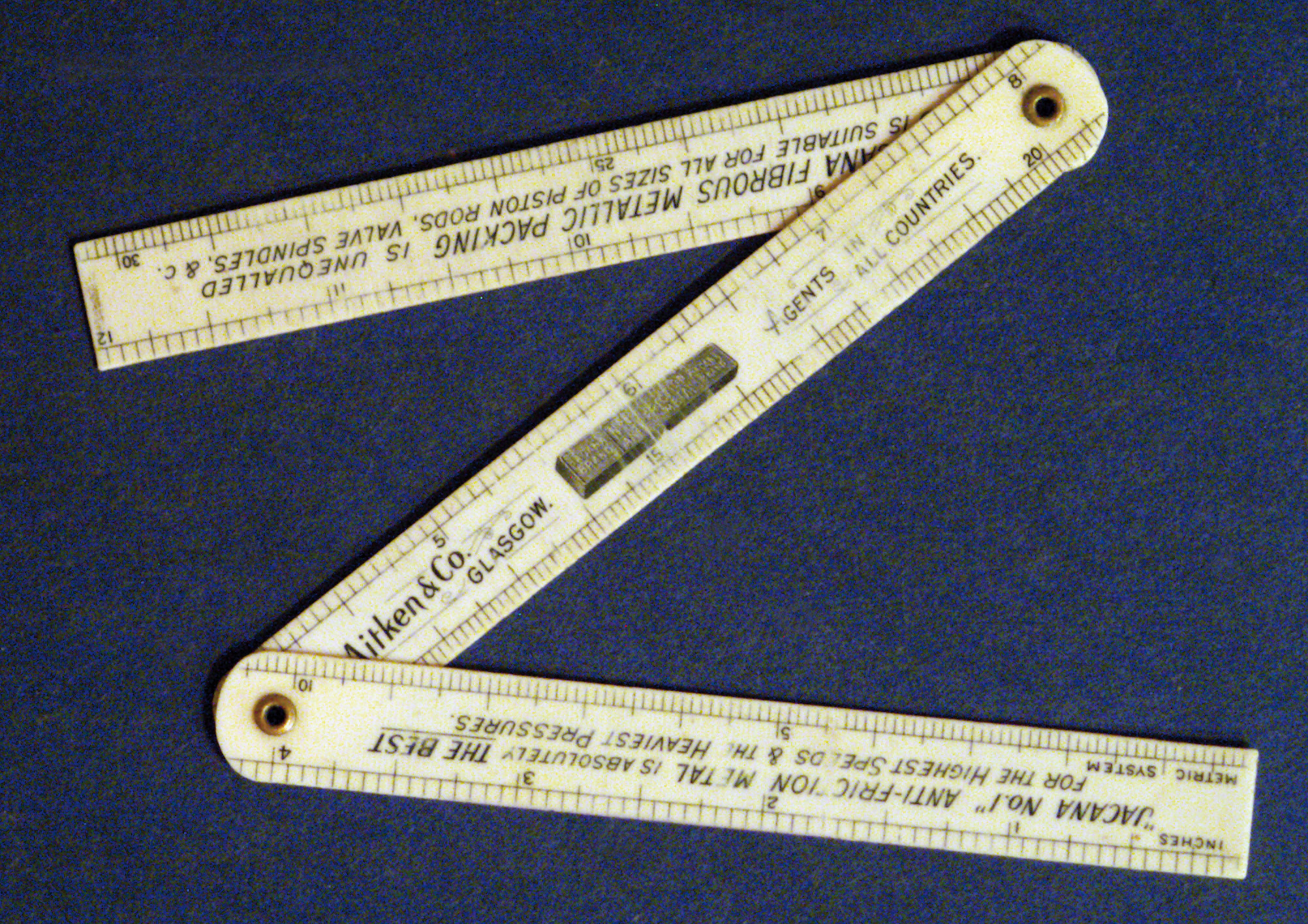 To find out if this folding ruler consisted of celluloid, a diamond-ATR unit was used to record an infrared spectrum of the ruler’s surface (figure 2). The folding ruler was clamped against the ATR unit and the surface was pressed onto the diamond window. Figure 1 shows the ruler and figure 2 the spectrum of its surface measurement. 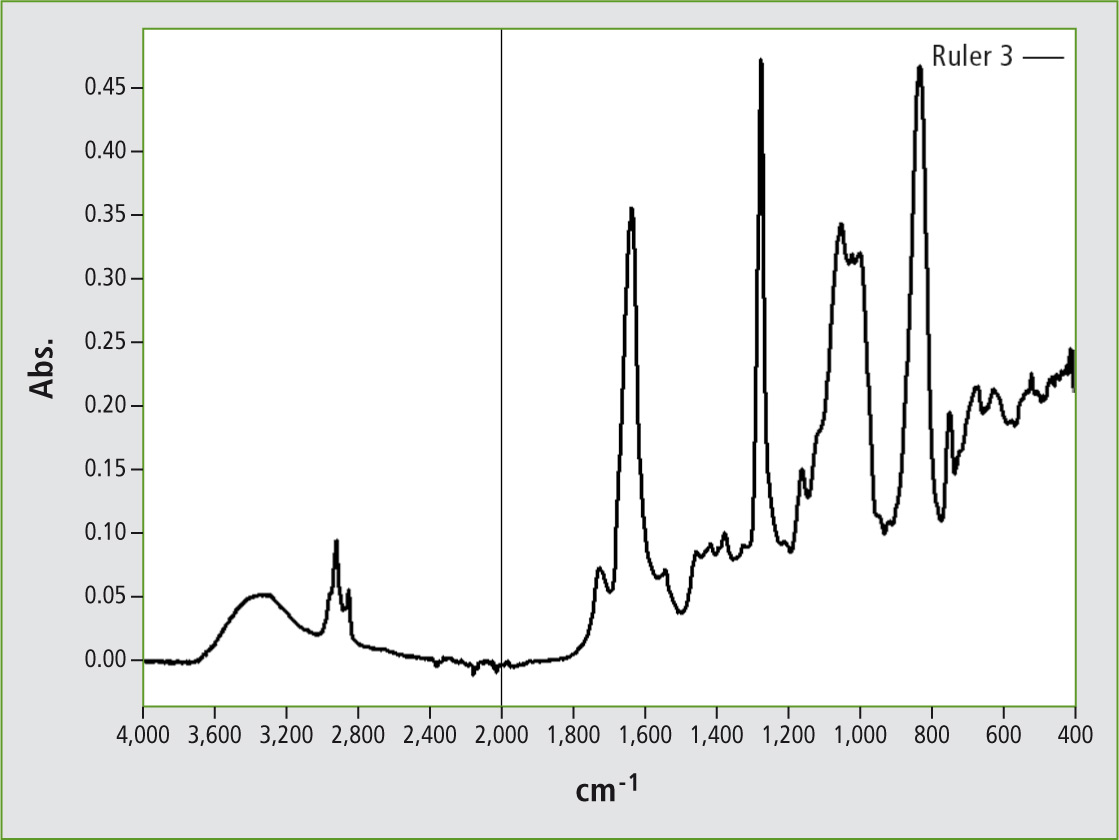 Figure 2: Infrared reflectance spectrum of an ATR measurement of the surface of a folding ruler made of nitrocellulose

Via a library search, the spectrum could unequivocally be assigned to nitrocellulose (figure 3).

Figure 3: Search result for the surface of the folding ruler – nitrocellulose was identified

Another interesting topic is ivory, which was in the past often used to make jewelry.

Sources of ivory were not limited to elephant tusks and rhinoceros horns, as the long tusks of aquatic animals such as walrus were used as well. The Puerto Rico inheritance also included a tiny chess piece made of walrus tusk (figure 4, photographed next to a one Eurocent coin for size comparison). 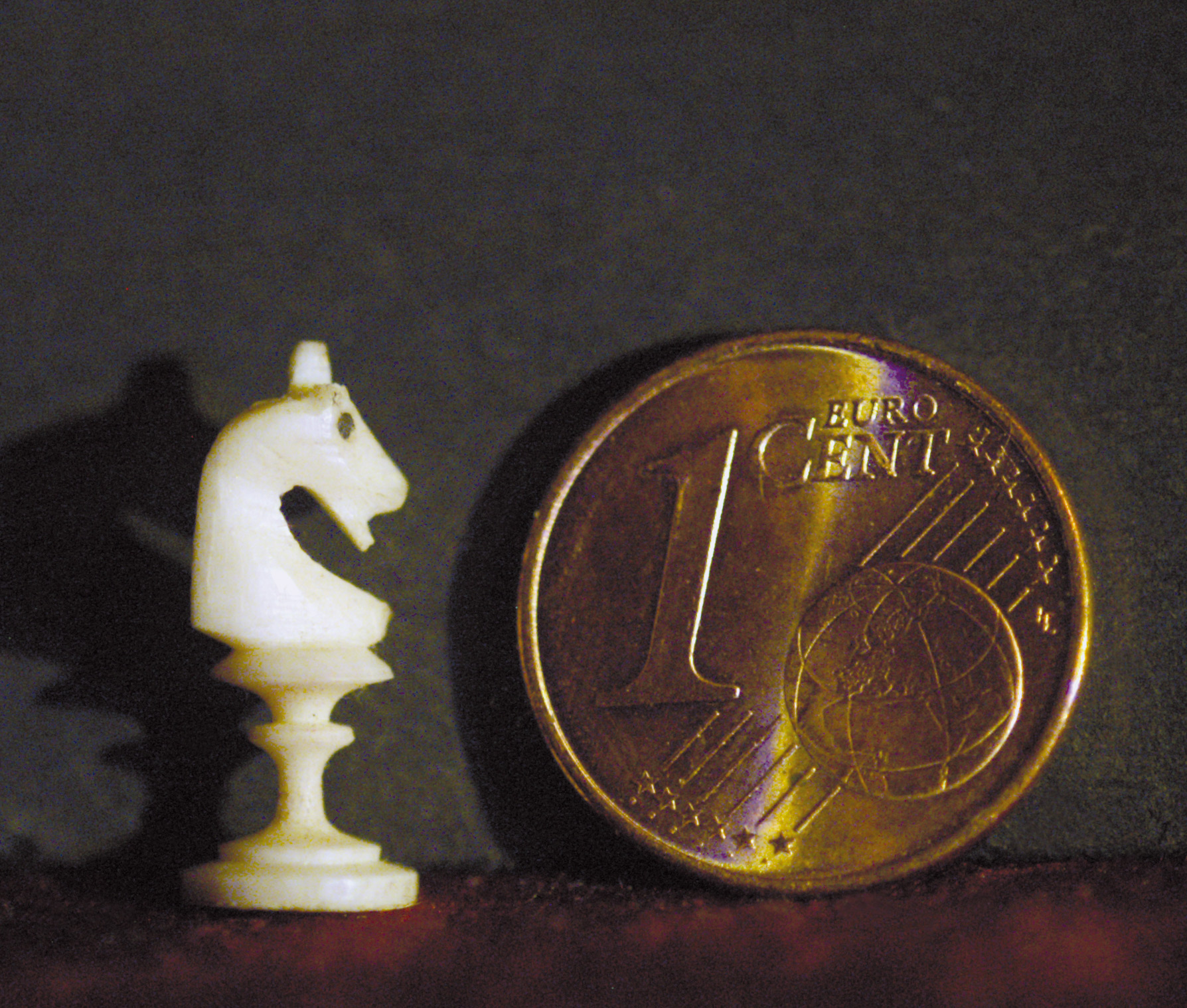 Figure 4: Mini chess figure made of walrus tusk, shown with a one Eurocent piece to visualize the size of the figure

A fragment was removed from the bottom of the chess piece and this sample was examined using ATR spectroscopy. The infrared spectrum obtained exhibited inorganic signals. Because ivory is a hard material, the ATR spectrum also exhibited noise in the absorption range of diamond.

This amplifies the CO2 signal from air at 2,300 cm-1 and the noise from water vapor in the air at 3,500 and 1,600 cm-1. This noise effect is due to the sample not covering the measuring window completely. 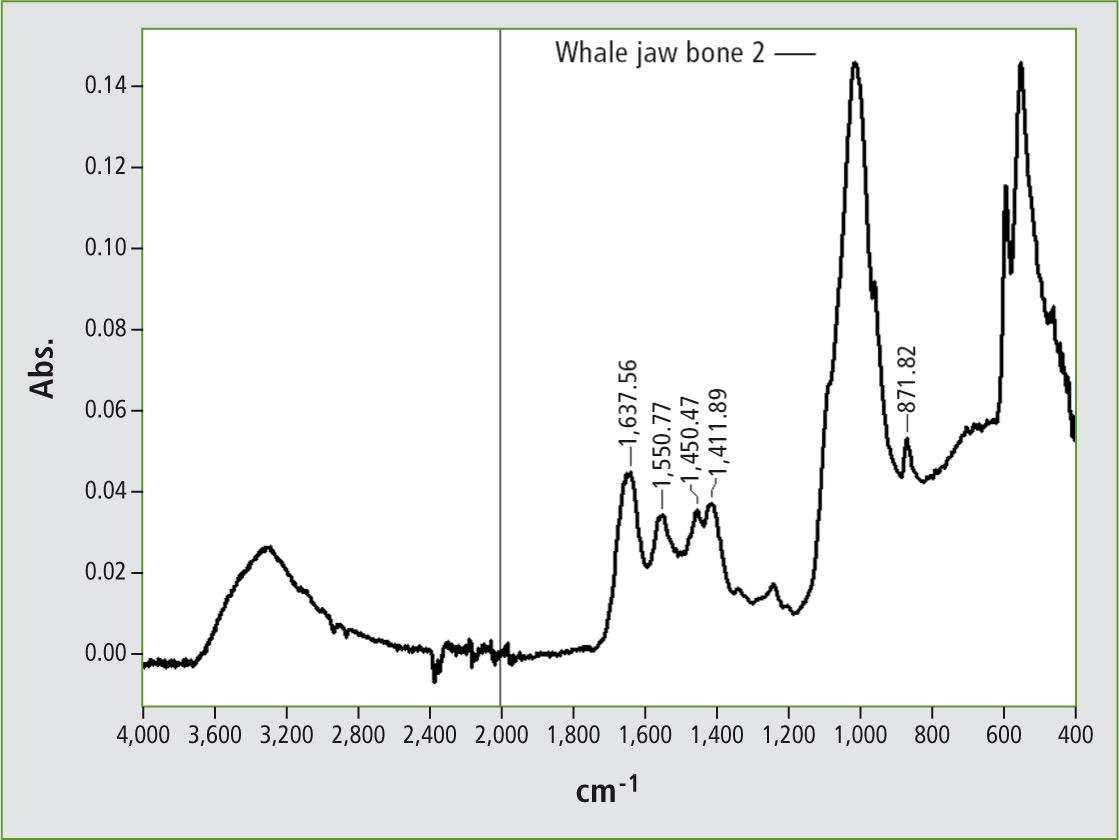 The infrared library search led to apatite. This result is correct, as teeth or bone contain apatite. According to the current literature, the apatite here is hydroxyl apatite, a calcium phosphate mineral that, depending on functionality, is found in varying concentrations in bones, hooves, horns or teeth. Figure 7 shows the spectra of different sources (equine hoof, whale jaw bone, apatite mineral and the chess piece). 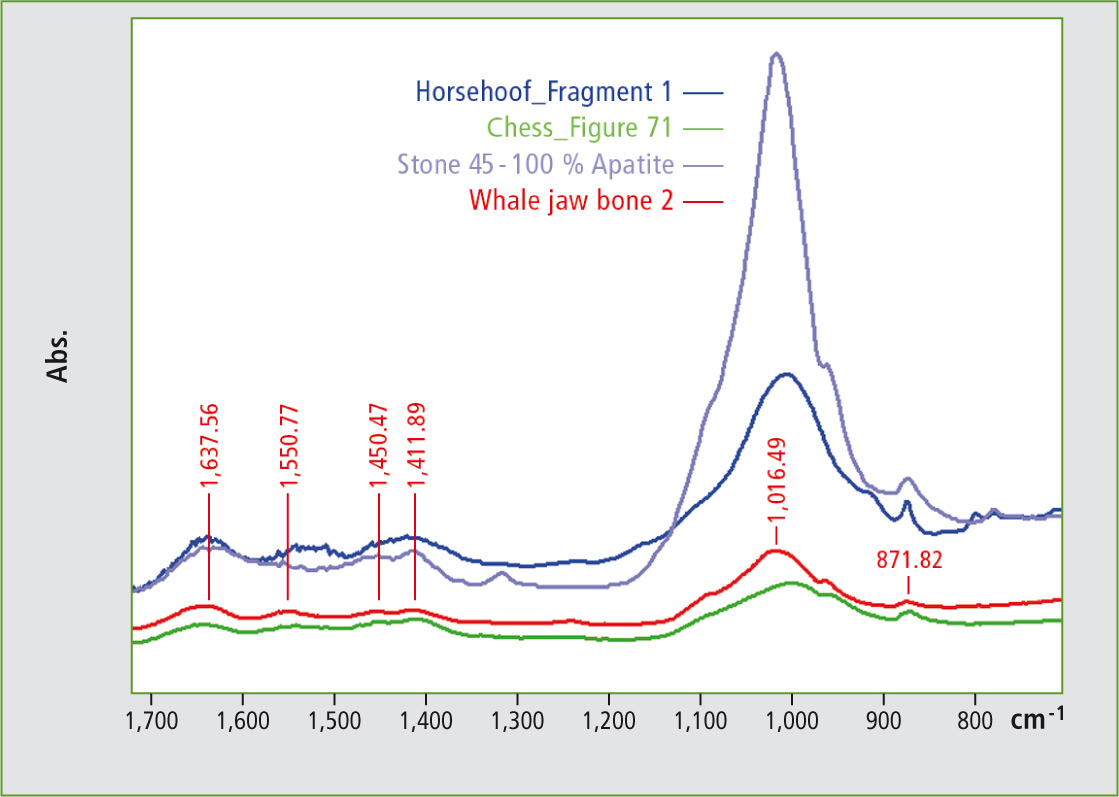 Figure 7: Infrared spectra of bone, teeth and hooves of various origins and an apatite infrared spectrum. In the walrus tusk spectrum, several signals are marked that are relevant for identification.

The spectra shown do not represent pure substances, but as they are natural compounds, their spectra arise from a sum of various substances.

A collagen spectrum may be seen in the apatite spectrum as a further natural substance. Both the apatite region (1,200 – 800 cm-1) as well as the protein region (1,700 – 1,400 cm-1) can be used for more specific determination of the natural material. It helps to distinguish between horn, teeth and bone and to use specific signals for age determination. [1] The measurements were carried out using Shimadzu’s IRTracer-100 and a Specac Quest diamond unit. The sample stage of the diamond window has a diameter of about 2 mm.

Infrared spectroscopy can be used for the direct analysis of natural and synthetic materials. Using spectral library searches, identification can be achieved quickly.

Thanks to Bernhard Westphäling for the interesting topic, his consultation and his participation as co-author.