Newborn Screening (NBS) is available in many European countries. The blood of newborns is tested for rare metabolic disorders within a few days following birth. When such diseases remain undetected, this can lead to massive health damage or even to death in infancy. Some of these tests are carried out using tandem mass spectrometry (MS/MS). The ‘Neonatal Solution’ software package supports rapid and routine evaluation of the measurement results. 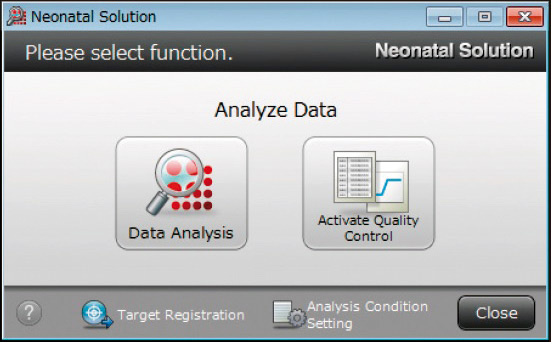 Newborn screening is a preventive medical measure to detect and effectively treat some important Inborn Errors of Metabolism (IEM) of newborns as early as possible. European countries screen for different types of disorders. In Germany for example, this comprehensive screening test was included since 2005 in the national screening program and since then every newborn child in Germany is currently tested for twelve disorders (see box “List of the target diseases in Germany) after written parental consent.

All tested metabolic disorders can be attributed to congenital enzyme defects.

Failing or incorrectly formed enzymes lead to degradation disorders in the organism or rather an accumulation of toxic intermediate metabolic products, small organic acids that cause poisoning and in turn lead to irreversible organ damage.

One of the most frequently occurring congenital metabolic disorders is phenylketonuria, an amino acid metabolism disorder that, if undetected, leads to physical and mental development disorders.

With a timely begun low-protein diet, however, the symptoms can be prevented.

These disorders include amino acid metabolism disorders such as phenylketonuria (PKU) or maple syrup urine disease, as well as fatty acid decomposition deficiencies in which the transport and oxidation of fatty acids in mitochondria is impaired (medium-chain acyl-CoA dehydrogenase deficiency (MCAD) and very long-chain acyl-CoA dehydrogenase deficiency (VLCAD); carnitine cycle defects). The screening also includes diseases such as the frequently occurring hyperthyroidism, an excessive production of thyroid hormone, or the very rare galactosemia in which too much galactose is present in the blood. Most of these diseases can be treated very well with a special diet, vitamins or hormones.

The decisive turning point in this issue (please see box “History”) was the introduction of tandem mass spectrometry in routine analysis. Using this technology, it is possible to simultaneously identify a large number of disorders of the amino acid metabolism, the metabolism of organic acids and fatty acid degradation within one analytical run. In this way, not only the number of marker substances (metabolites) investigated was increased, but also many more newborns with metabolic disorders could be tested and treated.

At the same time, the number of false-positive test results decreased significantly. Already in 2002, the screening committee of the German Society of Pediatrics and Adolescent Medicine required the use of mass spectrometry as standard method in newborn screening.

Already in 1934, the Norwegian physician Ivar Asbjørn Følling discovered an increased excretion of phenylpyruvic acid in the urine of mentally disabled patients, which could be detected using iron (III) chloride (Fölling’s test).

It took almost 20 years until the German pediatrician Horst Bickel could prove that the severe developmental disorder, which was later known as the disease phenylketonuria, could be prevented with a diet low in phenylalanine. As was quickly shown, the long-term result of this dietary treatment decisively depends on starting the diet before the onset of clinical symptoms.

In the early 1960’s, the American microbiologist Robert Guthrie developed an easy to perform bacteriological test for phenylalanine. Since 1969/70, all newborns in Germany have been comprehensibly tested for elevated phenylalanine blood levels using the test named after Guthrie. Another congenital metabolic disorder, galactosemia, was included in the screening program.

Over the years, additional tests like thyrotropin screening for congenital hypothyroidism and screening for 17-OH-progesterone (AGS) were included in the screening program. The treatment successes in positively tested children speak for themselves, the demand grew and it turned out that more and more diseases could, in principal, be treated presymptomatically, i.e. before onset of the disease, although effective screening methods for early determination were still not available.

On the third day of its life, blood is drawn from the newborn’s heel, applied onto paper filter cards and sent to the respective screening laboratory on the same day.

Due to the tandem mass spectrometer’s high specificity, more than 20 metabolites, such as amino acids and acylcarnitine, can be determined within the shortest possible time. Because of continuously improving instrument sensitivity, time-consuming sample preparation, such as derivatization, is now no longer necessary. Chromatographic separation of the marker substances is also no longer required due to the selectivity of the MS/MS technology. With an analysis time of less than two minutes, a high daily sample throughput is no longer a problem.

The amount of data acquired is enormous and a clear and effective data management is urgently required. With the Neonatal Solution data evaluation software, extremely large quantities of data can be rapidly and easily processed. In this way, users can select certain marker substances and create evaluation methods selectively for these substances only.

Concentrations, peak areas as well as concentration ratios for indicator substances can be calculated easily from the LC-MS/MS analysis data. For fast visual identification of conspicuous concentrations it is possible to define limit values for each marker substance. When the limit value is exceeded, the deviating values are flagged using a color-code.

Through newborn screening, disorders that are clinically not yet apparent can be diagnosed and in most cases treated at an early stage. Even when potential disease consequences cannot be prevented fully in all cases, timely treatment will often ensure a largely normal development.

Screening laboratories must meet high demands in terms of quality and speed, as the samples must be analyzed on the day of receipt. Currently, eight of the total of twelve tested disorders can be screened using LC-MS/MS analytics. The Neonatal Solution software with its functions customized to the evaluation of screening data enables rapid and effective processing of large amounts of data.

For Research Use Only. Not for use in diagnostic procedures. Not available in USA, Canada and China.