The key to success

Confirmed by headspace GC-MS: formation of ICN by lactoperoxidase

As part of the innate immune system, the heme protein lactoperoxidase (LPO) is essential for defense against pathogens in mucous membranes and bodily secretions (for instance saliva, tear fluid, milk and respiratory secretions).

The catalytic and antimicrobial properties of LPO are also used by manufacturers of foods, cosmetics and oral care products, where LPO is used together with a hydrogen peroxide generating system and (pseudo)halogens as preservatives [3, 4]. In some of these systems, iodine is used as the halogen because the resulting hypoiodous acid (HIO) and other reactive iodine species such as I2, I3– and I2OH– offer a broader spectrum of activity than HOSCN: thioether groups are also oxidized and iodine is added to tyrosine residues.

In contrast to the LPO-H2O2-SCN- systems, the I–-containing preparation is also characterized by bactericidal and antiviral properties [5]. This raised the question whether thus far unknown reactive products of LPO were generated. And indeed, the reaction products of LPO-H2O2-SCN-/I systems predicted from the results of 13C nuclear magnetic resonance spectroscopy could be confirmed using headspace gas chromatography-mass spectrometry (headspace GC-MS).

During the halogenation cycle (reactions 1 and 2), the native enzyme is oxidized by H2O2 to the reaction complex I, which in turn oxidizes SCN– and I–. The myeloperoxidase present in neutrophilic granulocytes was also able to oxidize Cl– and Br–. In the case of the peroxidase cycle (reactions 1, 3 and 4), numerous organic substrates, for instance epicathechin present in green tea, are oxidized to their corresponding radicals.

In the first step, the compounds of the basic systems consisting of LPO-S13CN– or I– were mixed in phosphate buffer pH 7.0, the reaction was initiated by the addition of H2O2 and the resulting reaction products were analyzed using 13C-NMR. The second step involved the combined use of SCN– and I– in various concentration ratios. It was found that with an excess of iodine, a new unknown reaction product for LPO was formed. Additional analyses revealed that iodide is first oxidized, this oxidized product subsequently reacts with thiocyanate yielding cyanogen iodide (ICN) [6].

Headspace analysis for the detection of ICN

To confirm the 13C-NMR results, a second detection technique was applied. As ICN is volatile, sample analysis using GC-MS was suitable. Due to the high volatility of ICN and the solvent exchange needed from water to an organic solvent, liquid injection was unsuitable for this investigation Headspace analysis was therefore applied for the detection of ICN.

This method is an elegant alternative to conventional GC-MS since, analogous to NMR, no further workup of the reaction mixture was required. Another advantage in the analysis of this reaction with unstable products was the short amount of time needed to introduce the analytes into the system.

The samples were analyzed using Shimadzu’s GCMS-QP2010 Ultra and the HS-20 headspace autosampler. By heating the reaction vessel to 60 °C, the analytes could be transferred directly into the headspace and a GC-MS analysis could subsequently be carried out. 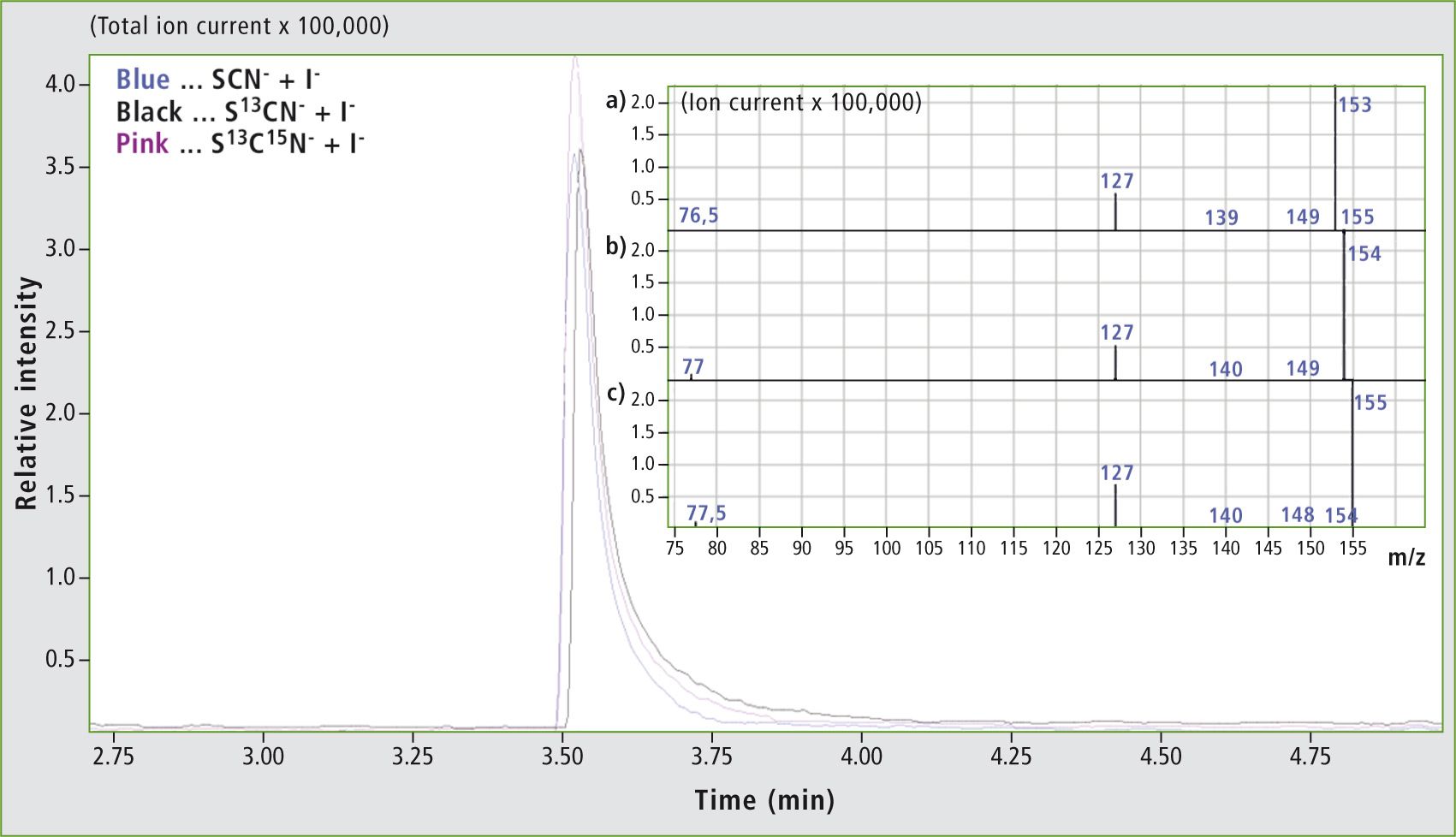 It could be shown that a ratio of 1:2 of I– to SCN– will lead to the production of ICN (figure 1a), while an equimolar use of both substrates did not result in the formation of a product (not shown). This is probably due to the fact that the value of the rate constant for the oxidation of I– by reaction complex I of the LPO is only half of that compared to oxidation by SCN–. Therefore, the required oxidation is not catalyzed.

The formation of ICN at an excess of iodine could be confirmed by comparison with a reference standard regarding retention time and mass spectrum (not shown). Furthermore, S13CN– (figure 1b) and S13C15N– (figure 1c) in the system mentioned were measured and supported the identification of ICN. In the underlying spectra for the molecular ion ICN++, shifts of the m/z values of 159.9 to m/z 153.9 and m/z 154.9 corresponding to the 1 u- and 2 u- mass increase of the marked ions were detected.

The headspace GC-MS measurements confirmed that the combined use of SCN– and I– in an H2O2 activated LPO system contributes to the formation of a new product. How this product complements the described bacteriostatic or bactericidal properties of HOSCN or HOI/I2 must be clarified in further investigations.