The Swiss Knife of analytics 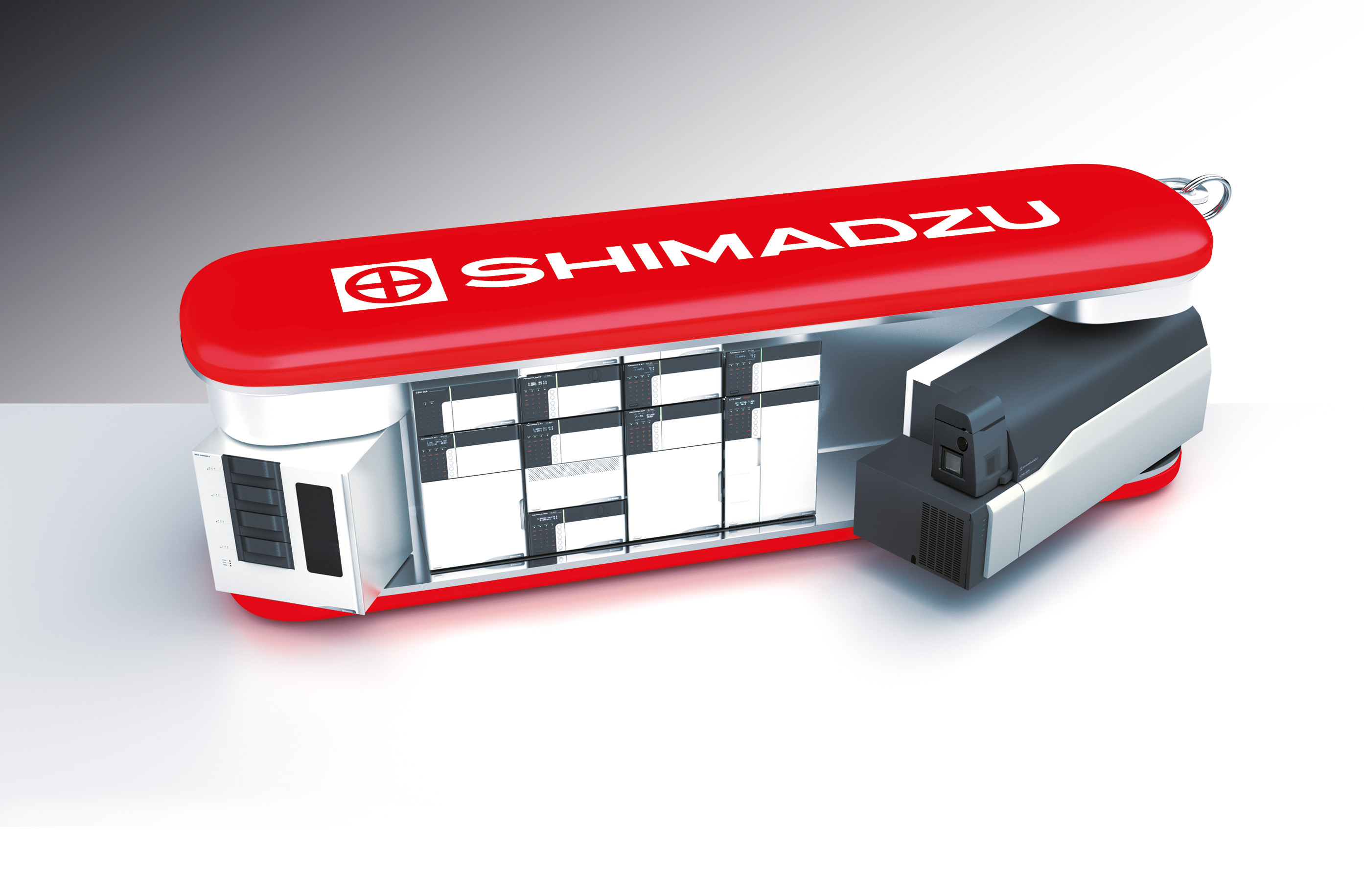 In supercritical fluid extraction (SFE) and chromatography (SFC) so-called ‘supercritical’ carbon dioxide is used as extraction medium and mobile phase respectively. Supercritical CO2 is a fluid state of carbon dioxide where it is held at or above its critical temperature (31.1 °C) and critical pressure (73.8 bar). In this supercritical state, fluid density is strongly affected by temperature and pressure, and its physical and thermal properties are between those of the liquid and the gaseous phase. Compressibility and diffusion coefficient of the supercritical solvent are much higher, while viscosity is decreased compared to a pure liquid, so it is far better suited to permeate penetrable solids. Use of ‘supercritical’ CO2 for extraction as well as chromatographic separation is therefore faster, more efficient, cheaper and more environmentally friendly than use of toxic organic solvents such as hexane, acetonitrile or chloroform.

The Nexera UC unified chromatography system combines SFE and SFC in a single flow path. Target compounds are extracted from solid samples such as a dried blood spot, food sample or polymer, and then transferred automatically to LC or SFC/MS analysis. The automated workflow reduces the risk of human error considerably during sample preparation as well as overall time of the experiment (see figure 1).

Supercritical CO2 is introduced into the extraction vessel, where static and/or dynamic extraction conditions can be adjusted in pressure and temperature according to the sample requirements. As all samples are extracted under light-shielding, anaerobic conditions, decomposition even of labile compounds, that are easily oxidized, photo- or heat-labile can be avoided. Extraction selectivity can be carefully controlled by adjusting the solvating power of the CO2 through changes in pressure and temperature. After extraction in the SFE unit, the sample-containing CO2 is introduced into the SFC flow line for chromatographic analysis by LC or SFC (see figure 2).

The fact that properties of supercritical CO2 near the critical point change drastically with only small variations in temperature or pressure is advantageous in SFE, as extraction selectivity and efficiency can be easily adjusted. However, it also renders supercritical conditions a non-robust area to work in, in super-critical-fluid chromatography, where changes in fluid density (hence selectivity) with column length and diameter, particle size and flow rate are unwanted.

Robust area to work in

CO2 at its critical point is non-polar, and solvent strength is often increased using a polar co-solvent. As soon as such an organic modifier is introduced, the mobile phase is no longer truly supercritical, although the terminology continues to be used. These now ‘subcritical’ conditions imply much lower changes in fluid density with small variation in pressure or temperature and are therefore a better, more robust area to work in for a reproducible SFC separation (see figure 3).

Many solvents are miscible with CO2 (e.g. MeOH, EtOH (H-bonding), ACN (dipole)) and offer additional interactions. They therefore induce controlled changes in retention and provide a valuable tool in improving the selectivity of a separation.

Method development using the Nexera UC system is simplified by the method scouting option. It offers fast screening of up to twelve columns and four mobile phase modifiers with the dedicated method scouting solution platform that generates scouting methods automatically according to initial input parameters (figure 4). 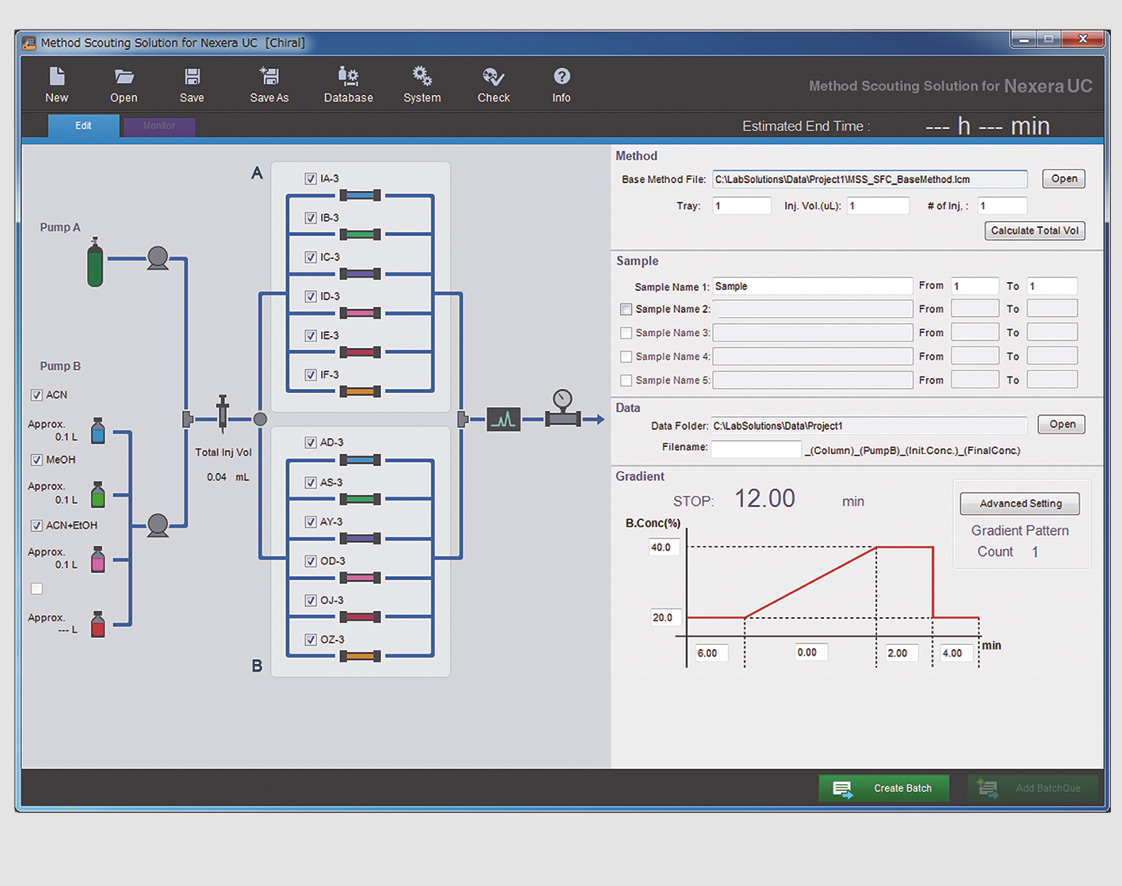 An increase in sensitivity of a SFC/MS separation compared to LC/MS is achieved by evaporation of the CO2 leaving a more concentrated sample. In addition, the Nexera UC features an ultra-low volume back-pressure regulator that can remain in the flow path when running the sample to the detector, enabling split-less sample transfer into the mass spectrometer. Back pressure regulators with larger dead volume cause peak dispersion, and have to be bypassed. With the Nexera UC, the total eluate can be transferred directly into the detector for extra high sensitivity (figure 5). 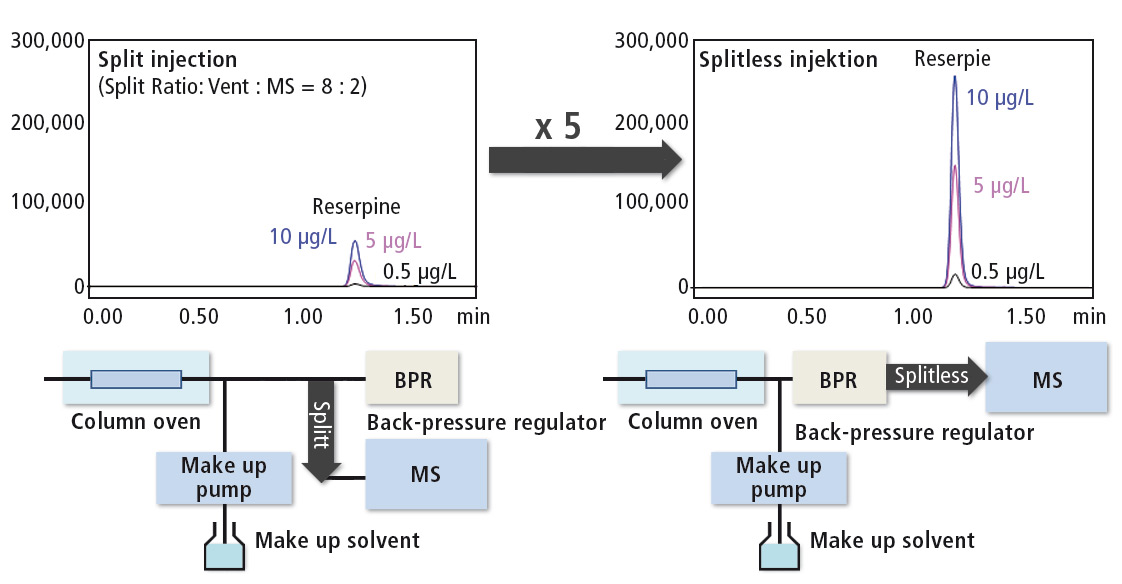