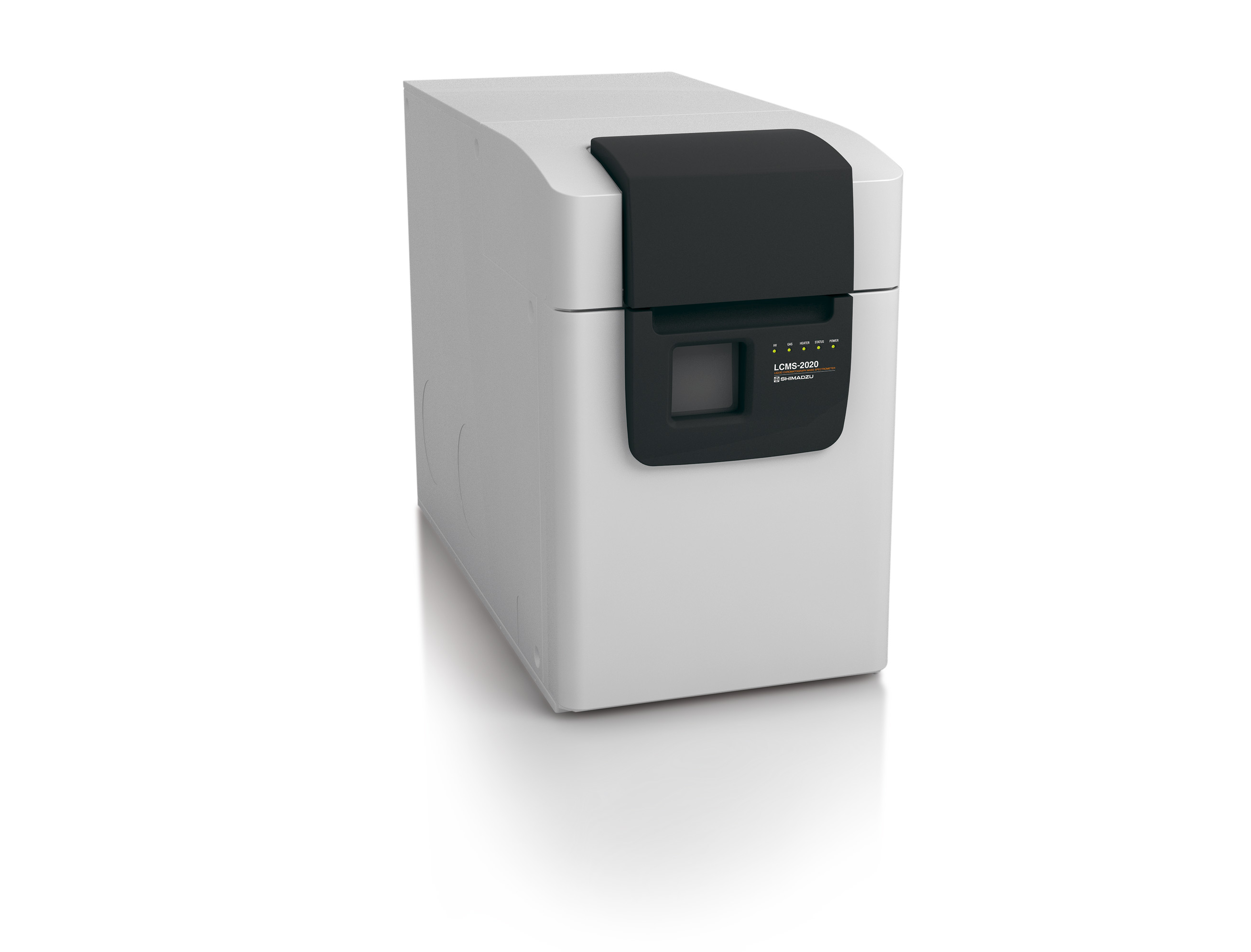 Organic synthesis of complex molecular structures often involves several synthesis steps and requires extensive purification of the intermediates and products. Some intermediates can only be detected with conventional analytical methods after time-consuming method development. For such a complex analysis of the intermediates and byproducts there is, however, insufficient time. Simple, universal and fast analytical methods can therefore bring enormous time savings, also in synthetic organic chemistry.

At the Institute of Organic Chemistry of the University of Basel, Switzerland, synthesis of new structures with unknown characteristics is a daily routine for the scientific assistants. Various mass spectrometric methods are used for synthesis control and structure determination. This is why the selection of a suitable analytical method (GCMS, LCMS with various ionization technologies such as ESI, APCI, APPI, MALDI) for each newly synthesized molecule is a great challenge.

Due to the many different molecular structures, a universal method is not available at present. Low molecular weight, non-polar (hydrophobic) compounds are preferably analyzed using GCMS. The LCMS with an ESI and APCI ion source serves either for the detection of more polar, often charged (ESI) or thermally stable, weakly polar compounds (APCI). In addition, many of the structures to be investigated are often thermally unstable. The MALDI technique is especially suitable for the analysis of high molecular weight compounds.

DART: fast analysis of synthesis products directly out of the reaction mixture

The DART (Direct Analysis in Real Time) ionization technology offers a highly promising alternative and allows for direct ionization of gases, liquids and solids under atmospheric pressure. In combination with a Shimadzu LCMS-2020 single-quadrupole mass spectrometer, rapid analysis of synthesis products directly from the reaction mixture without any sample preparation becomes possible.

In the DART source, a stream of helium is excited under atmospheric pressure by applying an electric potential to a helium plasma (see figure 1). This metastable helium plasma ionizes water molecules, which then transfer protons to the sample molecules. 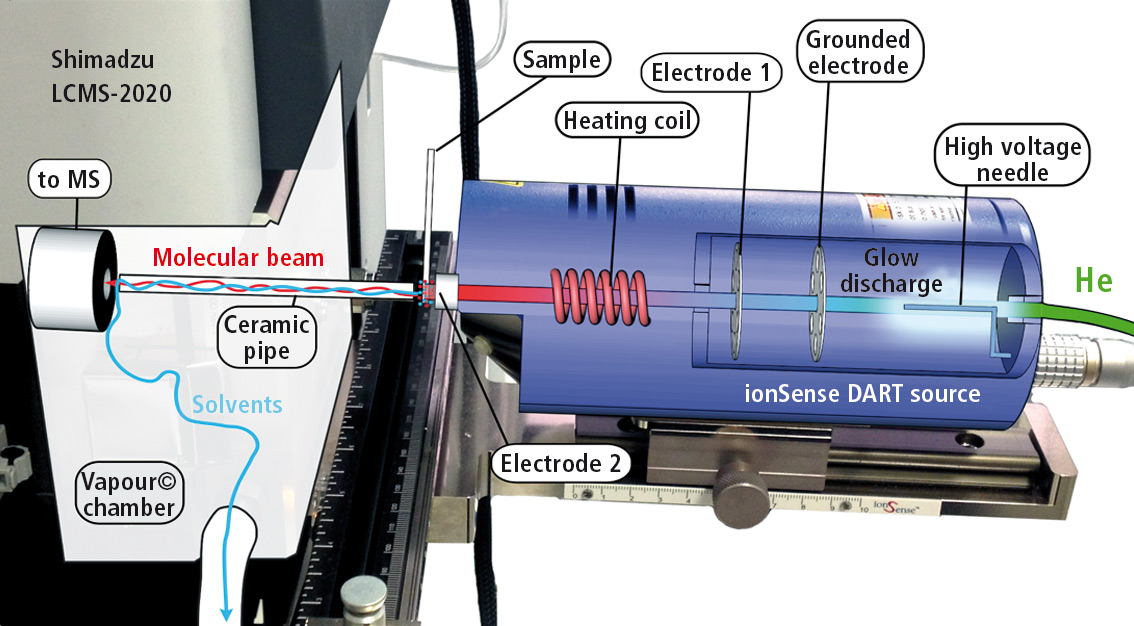 In addition to charge transfer via water molecules, the analytes can also be ionized directly. In the negative mode, ionization takes place via oxygen anions. This ‘indirect’ ionization results in simple mass spectra, mainly through the formation of the protonated [M+H]+ molecular ion or the [M-H]- ion in the negative mode. Depending on the structure of the analytes, M+ ions (such as for polycyclic aromatic hydrocarbons) or fragments can be formed. Multiple charged ions or adducts with alkali metal cations are not observed.

The DART source is easily installed and can be used directly ‘out of the box’ without parameter optimization. The He stream transports the ionized sample molecules into the mass spectrometer through a ceramic capillary, which can be cleaned easily whenever necessary (see figure 2). 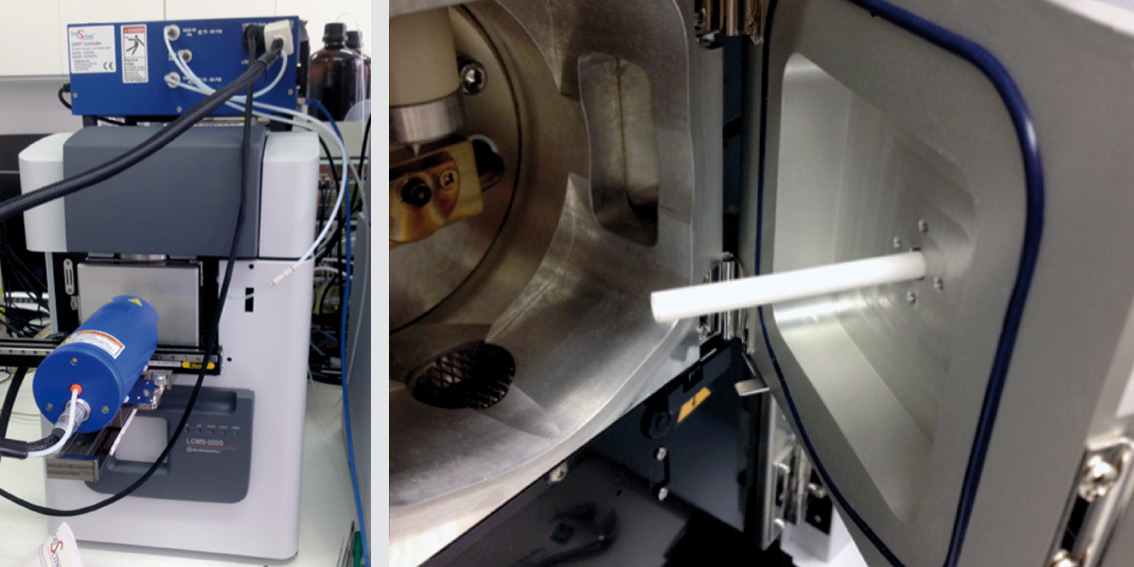 Figure 2: DART ion source from IonSense coupled to Shimadzu’s single-quadrupole LCMS-2020 (left). The chamber in front of the inlet to the high vacuum (image on right) is under slight vacuum in operation.

Small volatile molecules, such as solvents or water, are removed via the rotary vacuum pump. Figure 3 shows the qualitative analysis of a reaction mixture from a flask without further sample preparation. The sample can be removed easily from the reaction flask using a capillary and held in the gas stream of the DART source. An application example shows the use and benefit of the DART source. 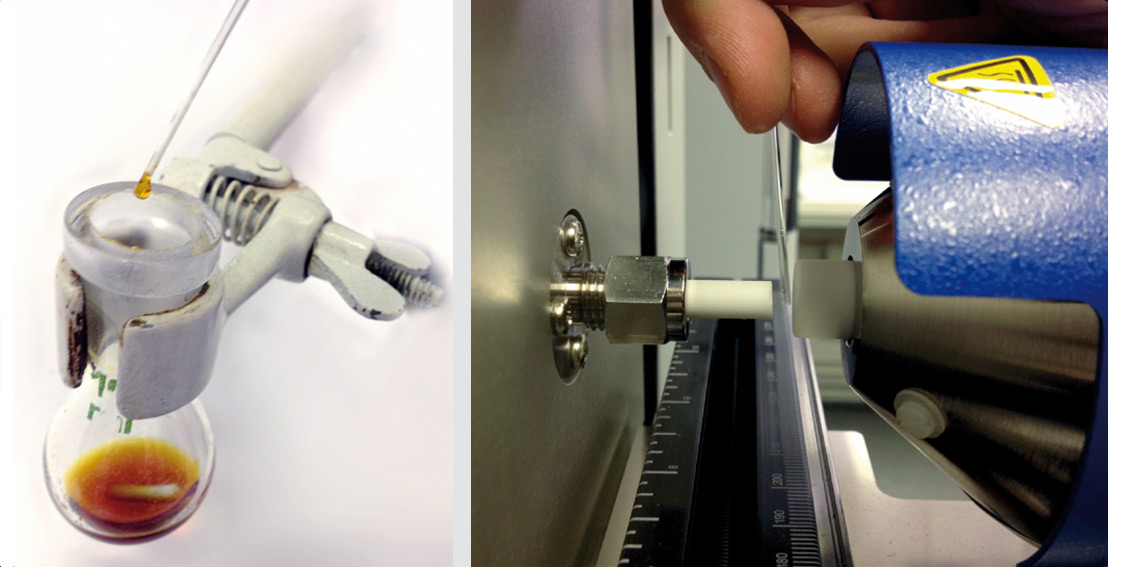 Figure 3: Sampling out of a reaction mixture of unknown concentration using a glass capillary and sample measurement by briefly holding the capillary in the ionization gas stream between the DART ion source and the LCMS-2020

Control of a synthetic route

The analysis of multi-stage synthetic routes is particularly challenging. Because of the continuously changing parent molecules, the mass as well as polarity and stability of the compounds and, consequently, also the appropriate mass spectrometric methods vary strongly. As an example, figure 4 shows the structure of a cyclic compound with six aromatic rings over twelve synthesis steps. 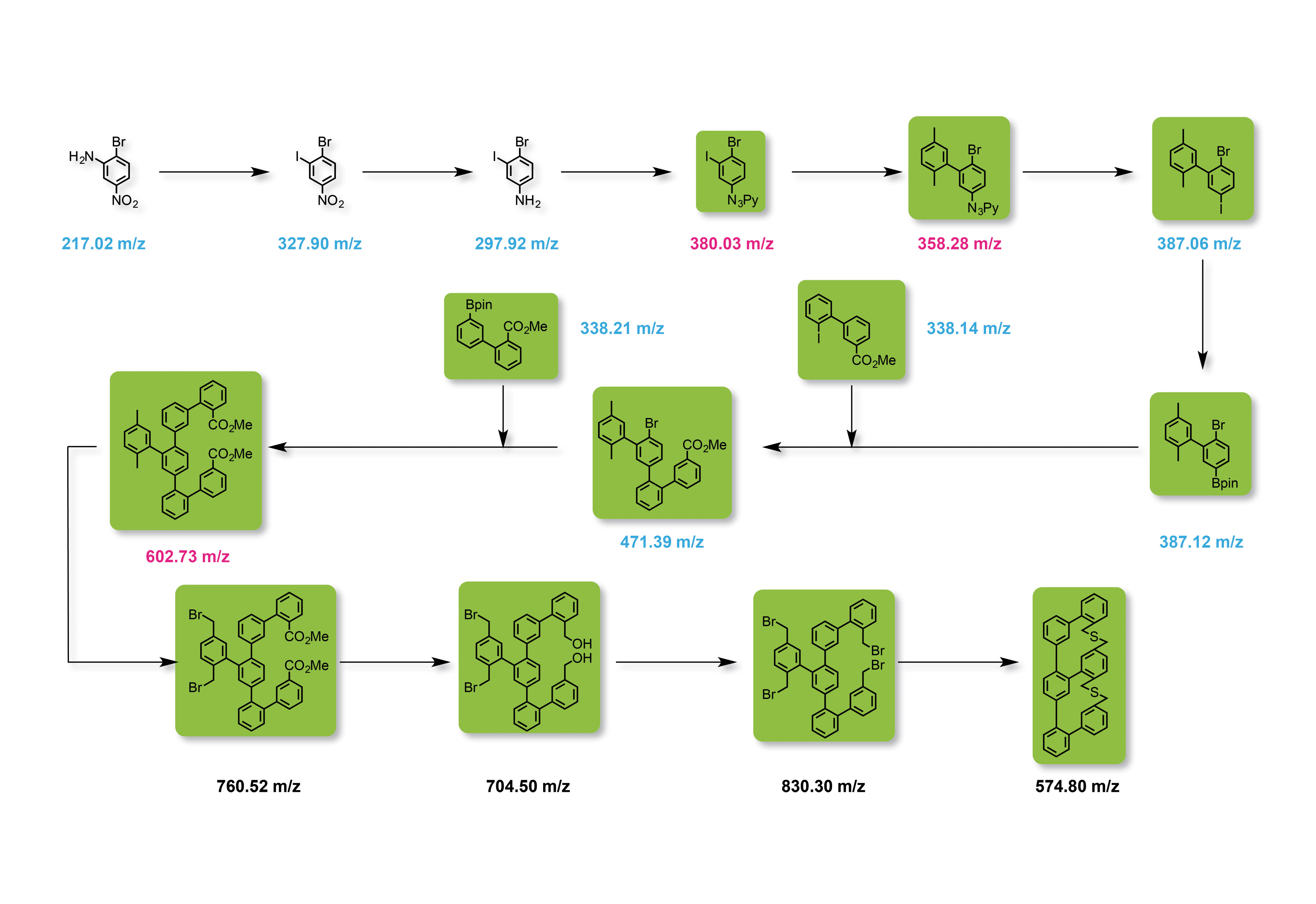 Each individual stage must be characterized, by which only the first eight synthesis products could be determined via GCMS. In the figure, the corresponding M+ molecular ion is shown in blue. The intermediate stages shown in pink were difficult to determine via GCMS due to their thermal instability or their high molecular weight. As of synthesis stage nine, the molecules reach a mass range critical for GCMS.

Analysis via LCMS with an ESI or APCI ion source is also not easy, due to the low polarity of the compounds. In this case, the DART ion source with which all molecules labeled in green can be analyzed without much effort proves to be the method of choice. The high polarity switching speed (15 ms) of the LCMS-2020 enabling simultaneous measurement of positively and negatively charged molecules is an additional advantage.

Combining the LCMS-2020 with the DART ionization technique enables the analysis of chemically very different polyaromatic compounds directly out of the reaction mixture. For qualitative measurement, a test capillary with a small amount of sample is held in the DART ion source in order to obtain a mass spectrum. Even large hydrophobic compounds are ionized in the helium stream and can be identified reliably.

The simple operation and robustness of this analytical method make the DART-LCMS-2020 ideal for daily routine use in organic chemical synthesis at the University of Basel.

Author
Michel Rickhaus
PhD student at the Institute of Organic Chemistry of the University of Basel, Switzerland