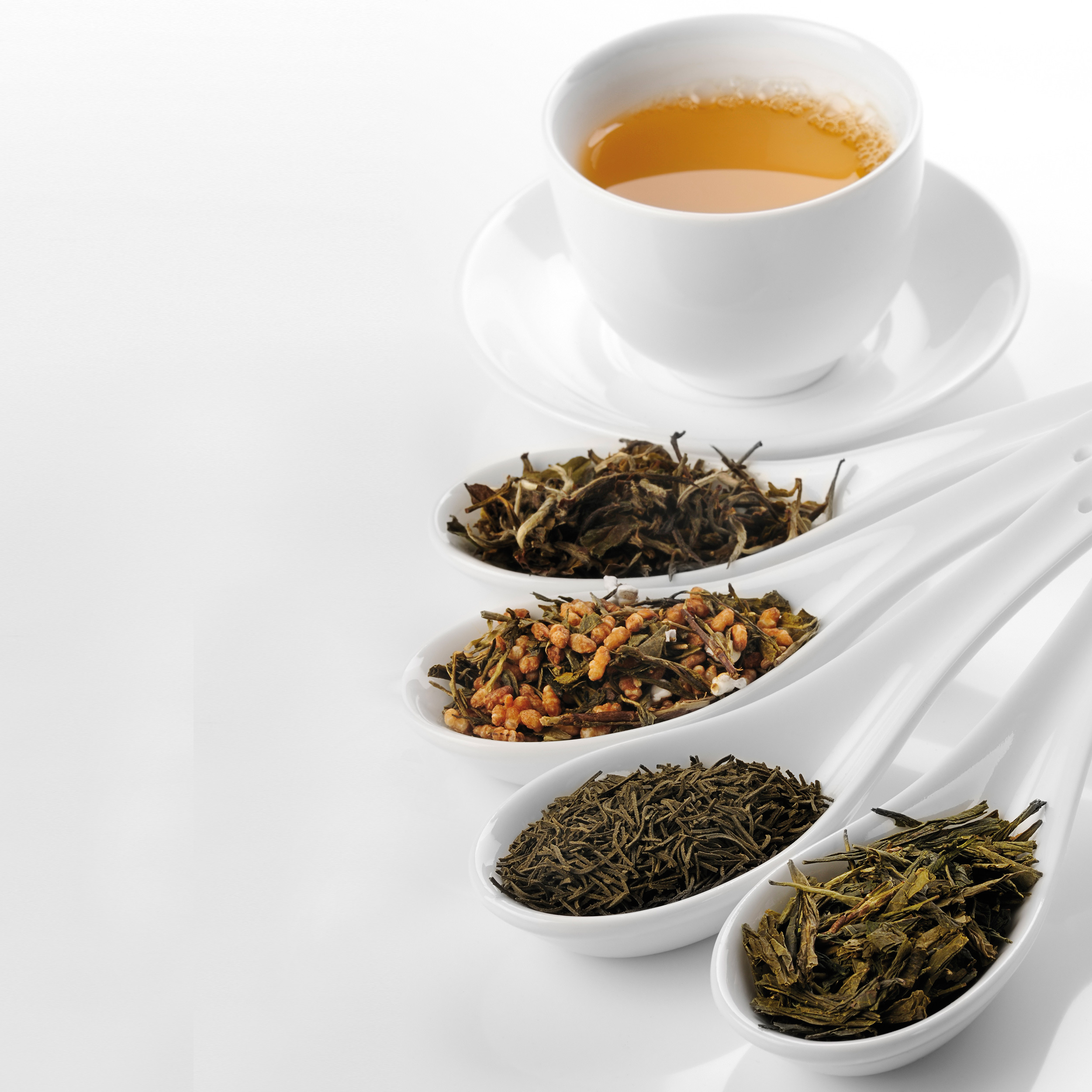 In recent times, design, shape and sensation of tea bags on the shelves of retail stores has changed. It seems that some of them may be made of plastics.

In the food industry, the polymer PET (polyethylene terephthalate) is used widely for packaging materials and antimony (Sb) is applied in its production. From harmless to harmful, the effects of antimony and its compounds on human and environmental health differ widely. Can Sb contaminate the food product?

Non-destructive testing using FTIR (Shimadzu IRAffinity-1S equipped with a Specac Quest single reflection ATR) and EDX (Shimadzu EDX-8000) gives clues about the material a tea bag is made of and the amount of Sb present in the tea bag. In addition, the highly sensitive ICP-OES technique (Shimadzu’s ICPE-9820; hydride vapour technique is ESI Elemental Scientific) is applied for elemental analysis of the brewed tea and tea bag. It was found that paper may be disrupted and lose its functionality after long immersion in hot water. The newer generation of tea bags is therefore made of plastics. Of course, tea bags are also still made of cellulose, but which other materials are in use? To find a solution for such questions diverse tea bags from different suppliers of tea were analyzed. 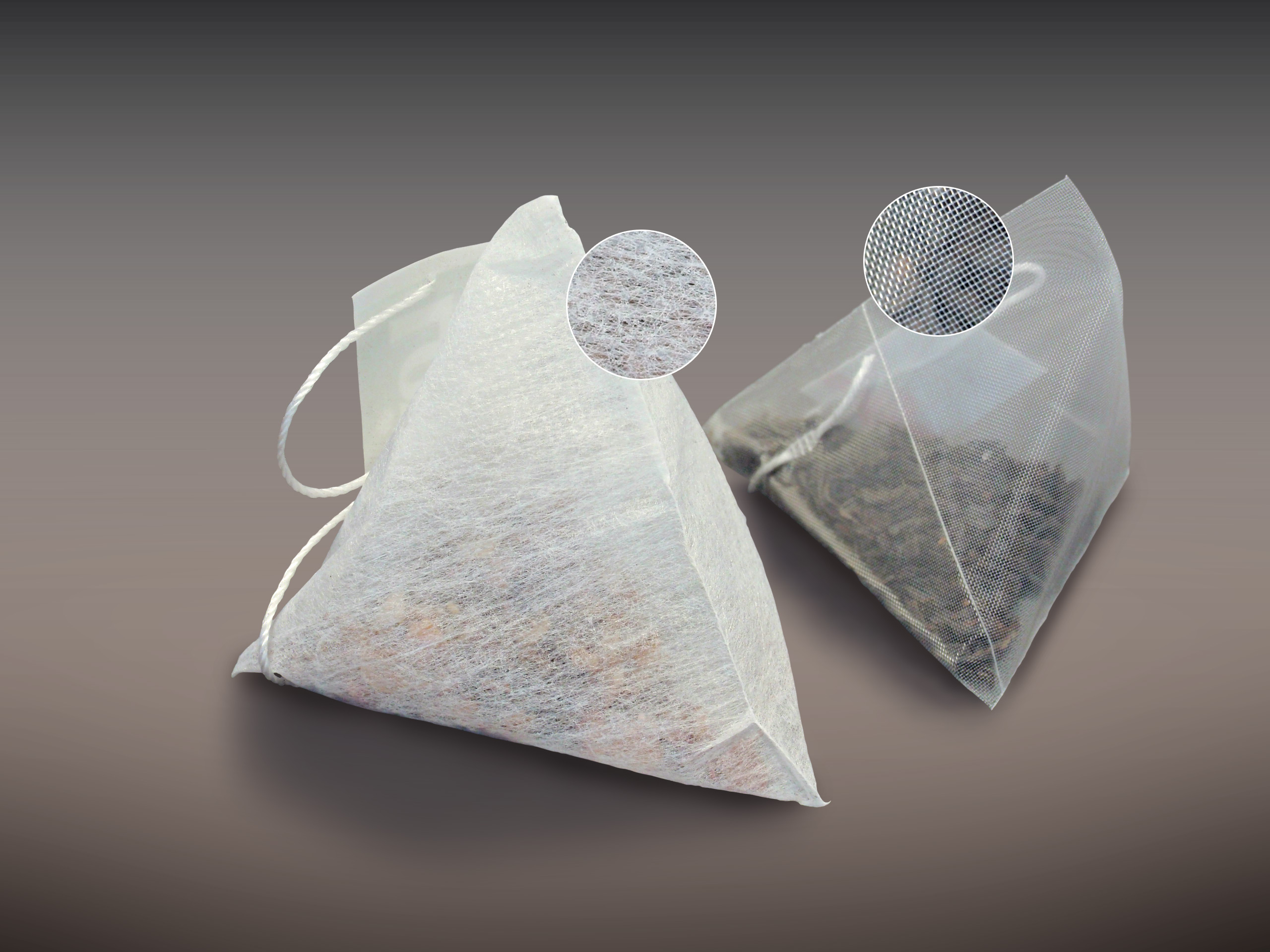 Tea bags in comparison – cellulose without PET, nylon or PP besides cellulose plus PET (Polyethylene terephthalate)

These materials are easy to investigate using nondestructive infrared analysis. For sample preparation, the material is simply placed on the window of a single reflection ATR-accessory. The material is pressed with an anvil onto the diamond window, and measurement of the infrared spectrum for identification can then be performed. Diverse tea bags were analyzed and the result was astonishing. Different classes of tea bag material were found among a small selection of various tea suppliers. According to the spectra, the tea bags were made of pure PET, cellulose plus PET and almost 100 % cellulose (without PET, nylon or PP (figure 1). PET is applied either in part as a surface material for cellulose or as the major part. It was surprising to find that even bags with an apparent cellulosic structure were made of PET. PET is probably the most common plastic used in the production of soft drink bottles. During manufacture of PET, antimony is commonly applied as a catalyst. Recent studies indicate that the antimony is subsequently found in the liquids stored in these bottles. Antimony is under strong control of Council Directive 98/83/EC on the quality of water intended for human consumption. The limit of 5 µg/L in drinking water should not be exceeded. For soft drinks filled in bottles, this rule is not applicable. With a focus on these studies, it was checked whether or not antimony (in the chemical form of antimony trioxide) has been used as a catalyst in the production of PET fibers for tea bags. 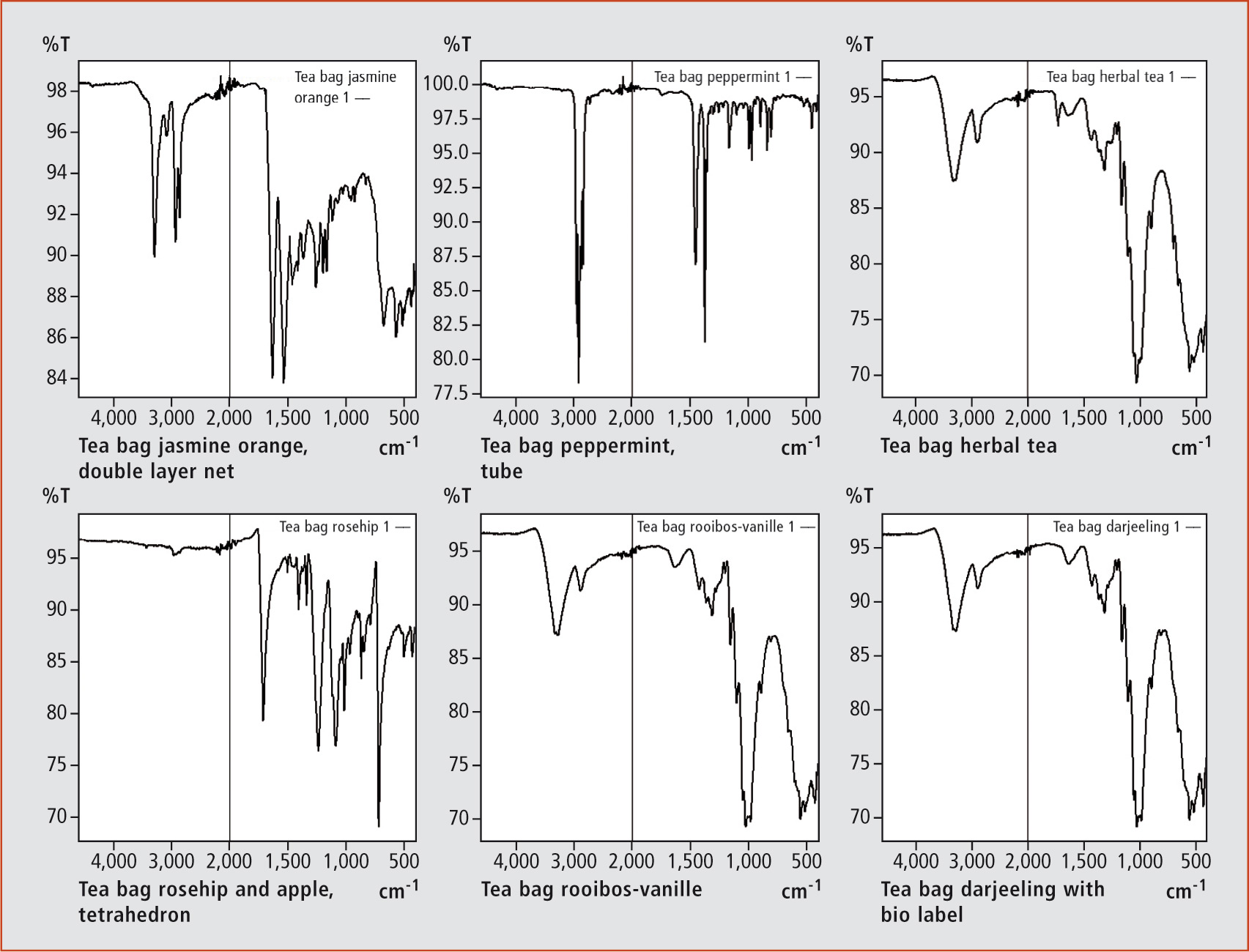 For a fast screening of tea bags with focus on antimony, the energy dispersive X-Ray fluorescence (XRF) spectroscopy technique was used. Both FTIR and EDX are non-destructive and surface sensitive. Depending on the sample, both techniques measure just one millimeter deep into the material, and sometimes only the first micrometers are measured. FTIR delivers molecular information (types of material/molecule) whereas EDX delivers elemental information on the ppm level in units of mg/kg (elements and concentrations). EDX analysis revealed that PET tea bags contained antimony.

For the measurement, the tea was removed from the bag. Eight bag layers were placed on top of each other to increase the signal intensity. More sample atoms in the same volume produce a larger signal. Before the analysis process started, the folded tea bag was fixed with tape in the instrument. After only three minutes measurement time, the elemental composition of the sample was identified. Besides Ti (titanium), a small amount (231 ppm) of Sb (antimony) could be found (figure 2). A cellulose tea bag does not usually contain Sb; however, plastic bags do so as they are produced using Sb as a catalyst. For energy dispersive XRF spectrometers, it is a challenge to differentiate between similar organic substances, if the elemental composition is the same. But using the combined results of FTIR and EDX, it can be clearly stated that the tea bag is made of PET (FTIR) and contains about 200 ppm Sb (EDX). EDX can perform quantitative measurements with and without standards up to the single ppm range. But in comparison, LLD and accuracy of methods such as AAS and ICP are still superior. The higher accuracy is usually connected with more advanced sample preparation. Suitability of the method depends on user requirements. 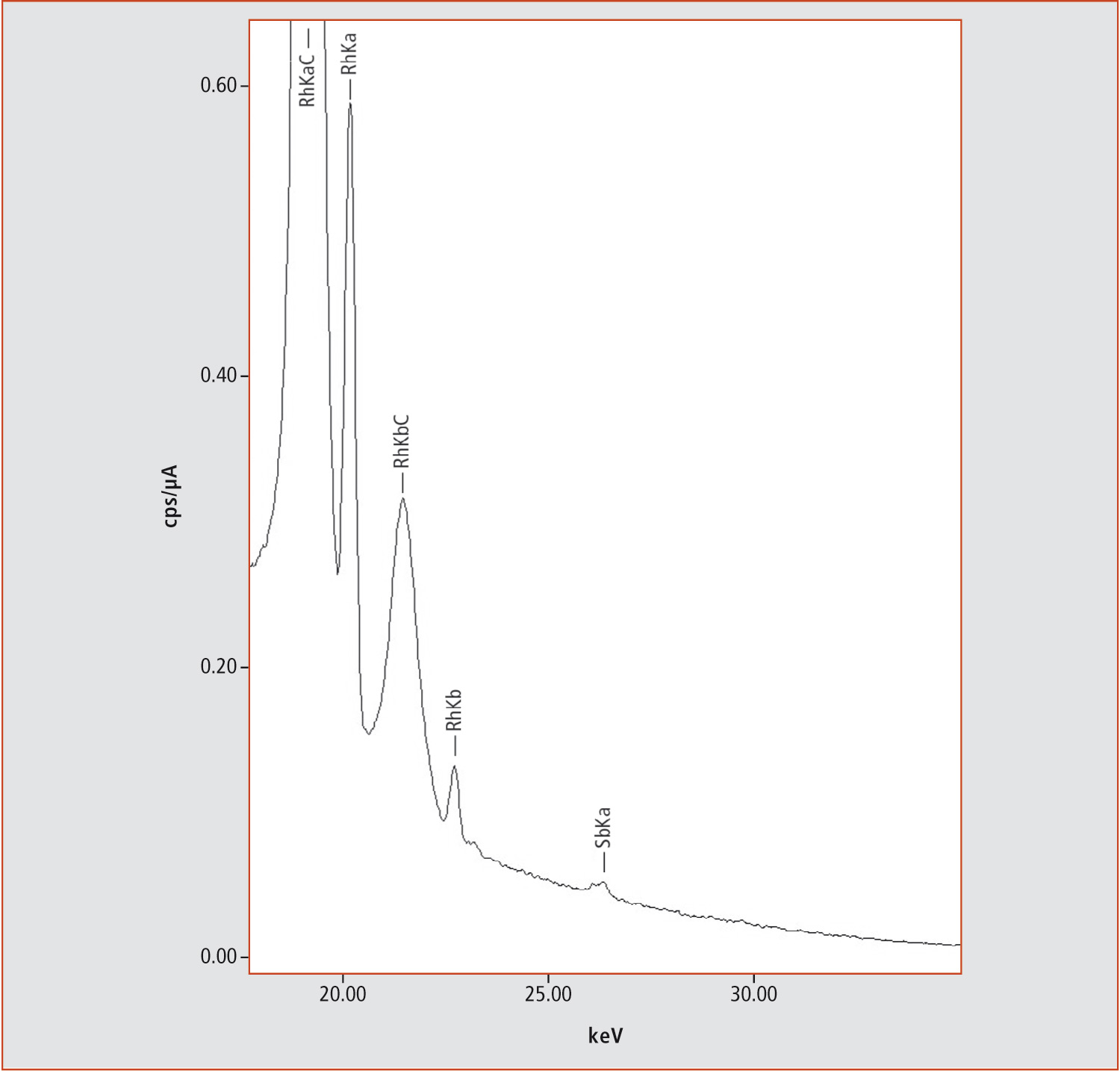 Indication of antimony found with EDX led to the next step: the analysis of brewed tea. Water based liquids need a more sensitive analysis technique, which is provided by the inductively coupled plasma optical emission spectroscopy (ICP-OES). The detection limit is in the low ppb range [µg/L] and lower. For antimony analysis, the hydride vapor technique is the right method of choice. Using this technique, some elements of the sample such as mercury, arsenic, selenium and antimony, come into contact with a NaBH4 solution and form gaseous compounds (pre-reaction).

In the next step, the formed gas phase is separated from the remaining liquid, so only the hydride elements (gas phase) are analyzed. Unlike common direct nebulization of samples (with only 2 – 4 % of generated sample aerosol), utilizing the hydride vapor technique analyses almost 100 % of the elements (gas phase after pre-reaction). This aspect brings higher sensitivity, and additionally the elements are separated from the sample matrix (waste). Bag, Tea Bag and Loose Tea. Three tea bags made of different kinds of material were selected. First, the tea was removed from the bags so as to evaluate which material would release the biggest amount of antimony. For each sample, 200 mL of tap water was boiled and the samples were brewed for 5 minutes. Tap water boiled with a cellulose tea bag (layered with PET) was found to contain 1.8 ± 0.5 µg/L antimony. The tap water in contact with a different tea bag (coarse-meshed PET structure) resulted in 2.8 ± 0.3 µg/L antimony. Both results are within an acceptable range, which is not increased, as typical tap water contains up to 3 µg/L antimony and up to 5 µg/L are allowed for drinking water. A 100 % cellulose bag has not been regarded. As last sample, a bag made of very fine structured PET was examined. This sample released the highest amount of antimony and the water contained 8.4 ± 0.8 µg/L after the five minute brew process, which means a significantly increased concentration above the level defined by Council directive 98/83/EC.

The reason for this significantly higher concentration seems to be given by the classification of this sample as “fine structured” PET. The surface area of this material is much larger than the coarse-meshed PET bag, for example. As a consequence, contact area with the liquids is increased enormously by the fine structure. The cellulose bag layered with PET also has a large surface area, but the amount of PET in this material is quite low, so the ability to release antimony is limited. As the fine structured PET tea bag seems to be most critical, further experiments focus on the real application. Using same conditions, this tea bag was prepared including tea (rosehip apple), and the final product contained 15.4 ± 0.5 µg/L. The different compounds in the tea appear to place the surface under more stress, and the antimony releasing properties are increased by the different contents of the tea.

Analysis determined that the same tea brewed without the bag had a concentration of antimony of only 2.3 ± 0.1 µg/L. So, the tea is safe to use. In addition, other elements were monitored, since ICP-OES analyses the whole wavelength range at the same time. The absence of arsenic, mercury and selenium, for example, could be confirmed. The detected signal increased only for antimony (figure 3). 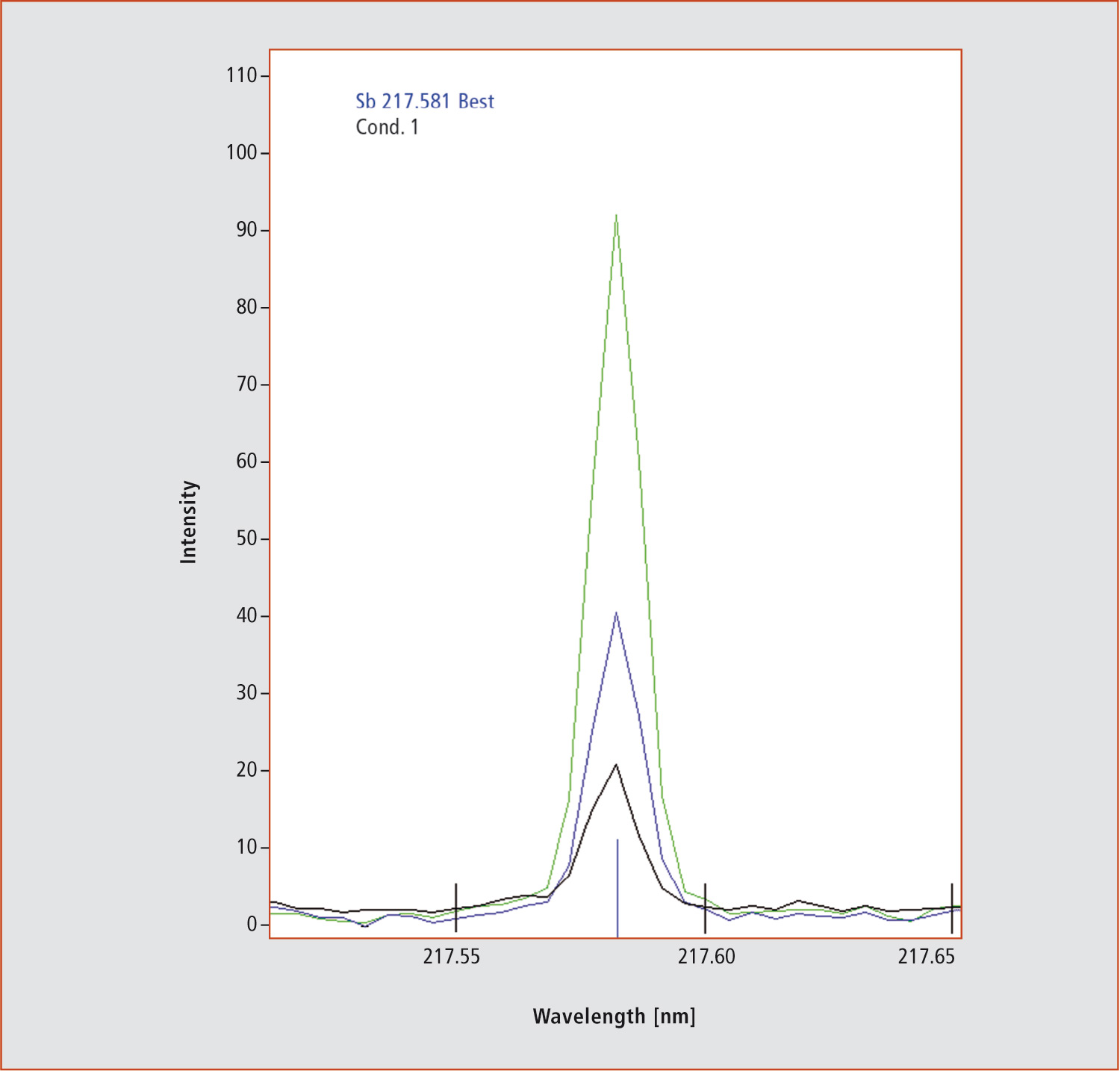 It is demonstrated that the consequences which go hand in hand with today’s materials are not always obvious. The tea bag material with the highest amount of antimony and also the highest ability to release this element during brewing (15.4 ± 0.5 µg/L), looks more like cellulose (lead image) than plastics. It is apparent that the structure of the cellulose bags used traditionally has been imitated in the use of this plastic material. Using FTIR, EDX and ICP-OES techniques, such a hidden story can be investigated and revealed.

Acknowledgements
Special thanks to Albert van Oyen (Carat) for insights into this fascinating research project.