Working while we are sleeping – according to a German legend, this is what the house gnomes named ‘Heinzelmännchen’ are known for. Gyro Gearloose, a Disney character, also had an assistant called little helper, who supported him in his projects. In everyday life, a modern variation thereof is the LED that, for instance, can indicate the status of an electrical appliance. These LEDs can be found everywhere and are vividly noticeable in the darkness of the night. 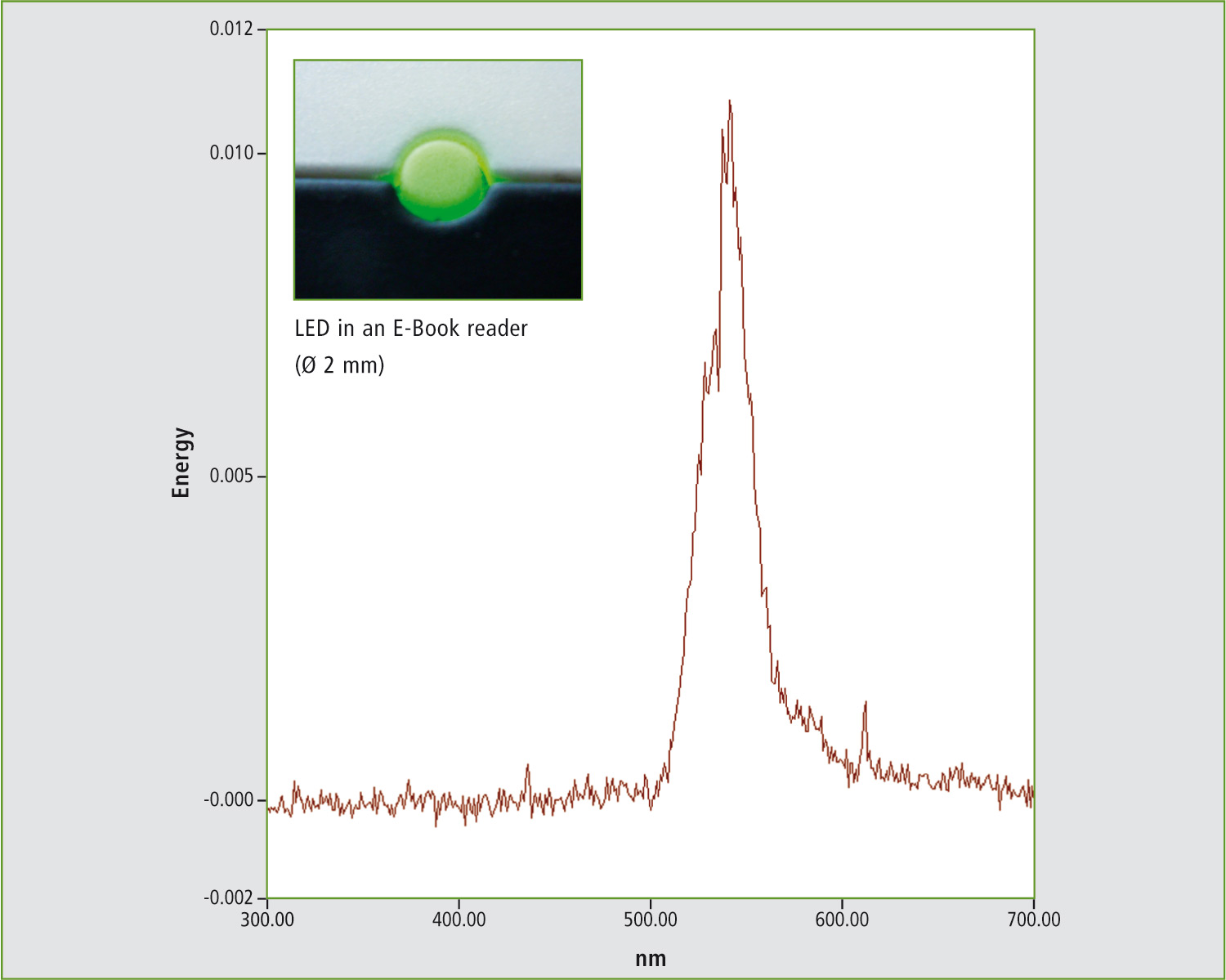 With their red, blue, green or orange colors, they are used in offices, in transportation and in households. In the newest generation of traffic lights, they save many municipalities money due to their intense luminosity and low energy consumption.

Depending on the lighting objective, the light emission of LEDs can be dosed. The radiant power of a traffic light must draw the attention of road users, while an LED on an e-reader should only indicate that it is switched on. An intense green LED glowing from an e-book could lead to short-term red-green vision impairment when reading for a prolonged time. 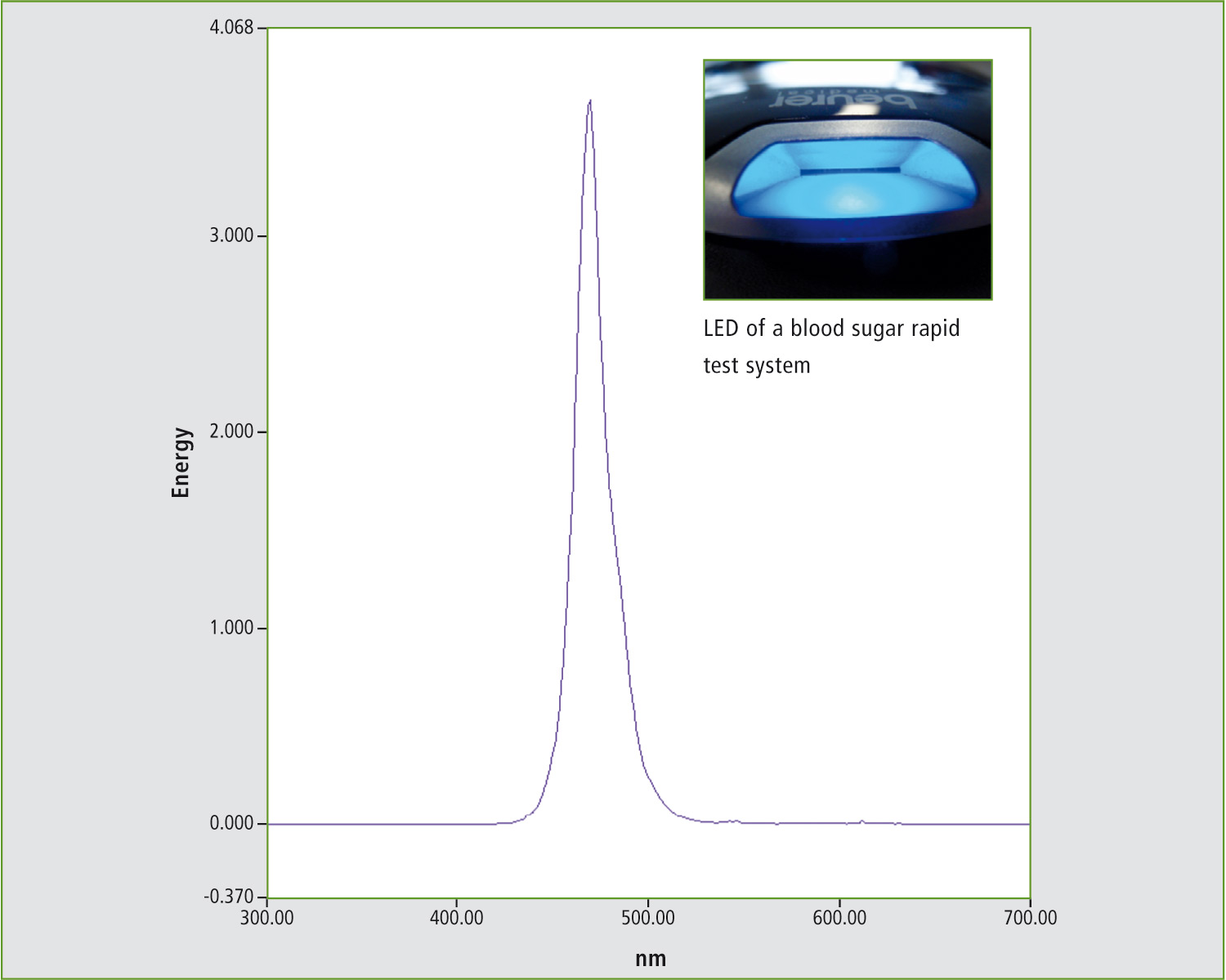 Figure 2: LED of a blood sugar rapid test system used to illuminate the shaft (approx. 1.3 cm) in which the test stick is inserted. The LED is placed under a plastic plate, which is used as a diffuser. The visible spectrum of 300 to 700 nm is shown on the right.

What is an LED?

LED stands for light-emitting diode. The diode consists of a semiconductor material that, depending on its composition, can emit light in different colors. This light is attributable to the phenomenon of luminescence. The luminescence colors are dependent on doping of the semiconductor material with mixtures of inorganic salts, including those of rare earths. Based on doping, a so-called specific light color can be set to a fixed analytical wavelength [1]. 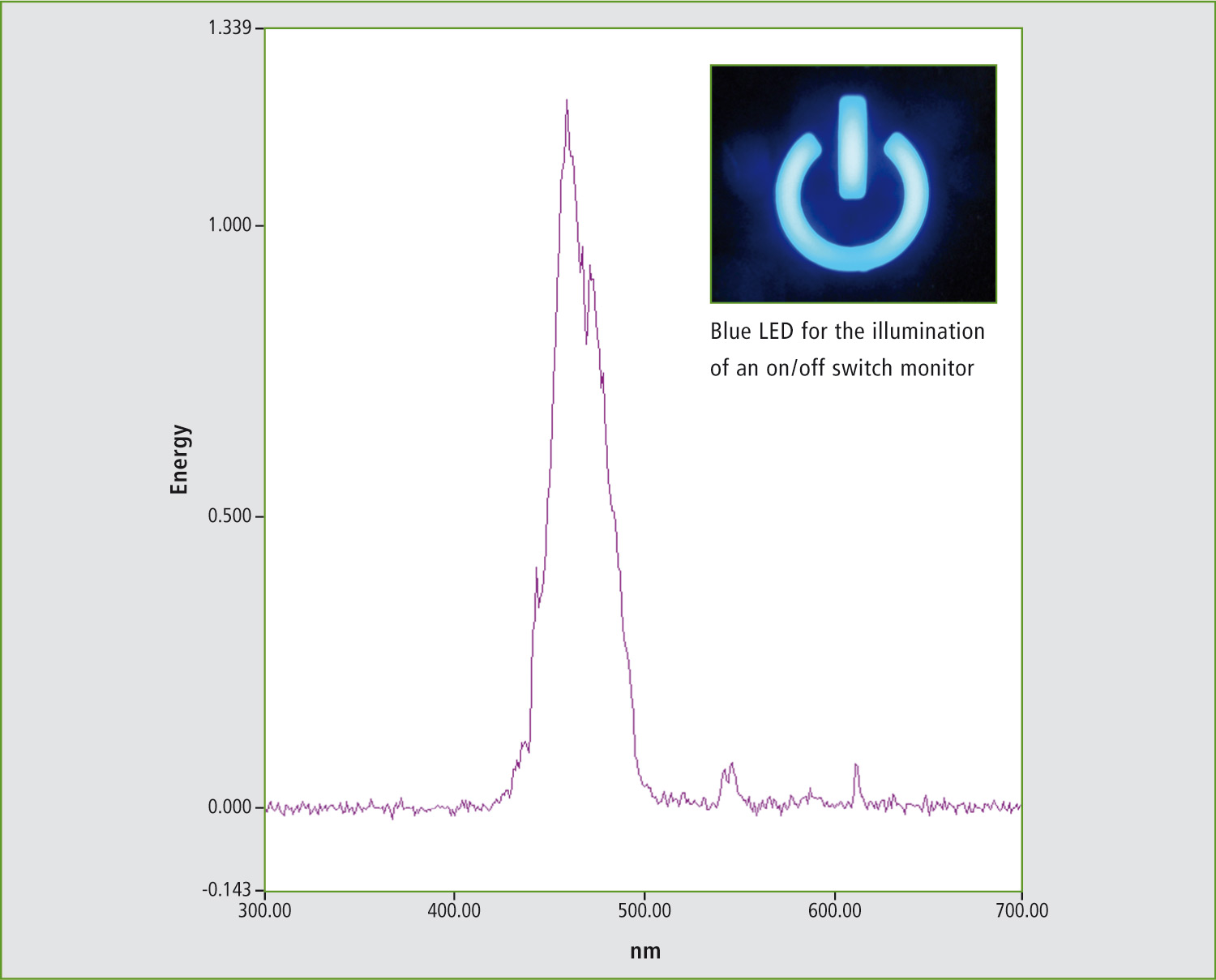 Figure 3: Blue LED for the illumination of an on/off switch monitor and its visible spectrum from 300 to 700 nm

In the following application, the luminosity and color emission of various commonly used LEDs are investigated. The LEDs were not removed from their devices but were investigated in their built-in state. Depending on their intended use, LEDs are directly visible or are installed behind diffuser plates where they are used to illuminate a specific area instead of a selective point.

Which spectrum is to be expected?

Due to the characteristics of single-color LEDs, bandwidth spectra with an analytically meaningful bandwidth reflecting the inorganic substances are to be expected.

LEDs are thus monochromatic. The situation is different with LEDs that emulate white light. Here, the combination of, for instance, a blue LED with a luminescent dye that, excited by the ‘blue’, will emit a broad band and thus covers the visible range, which includes the primary colors green, red and blue. 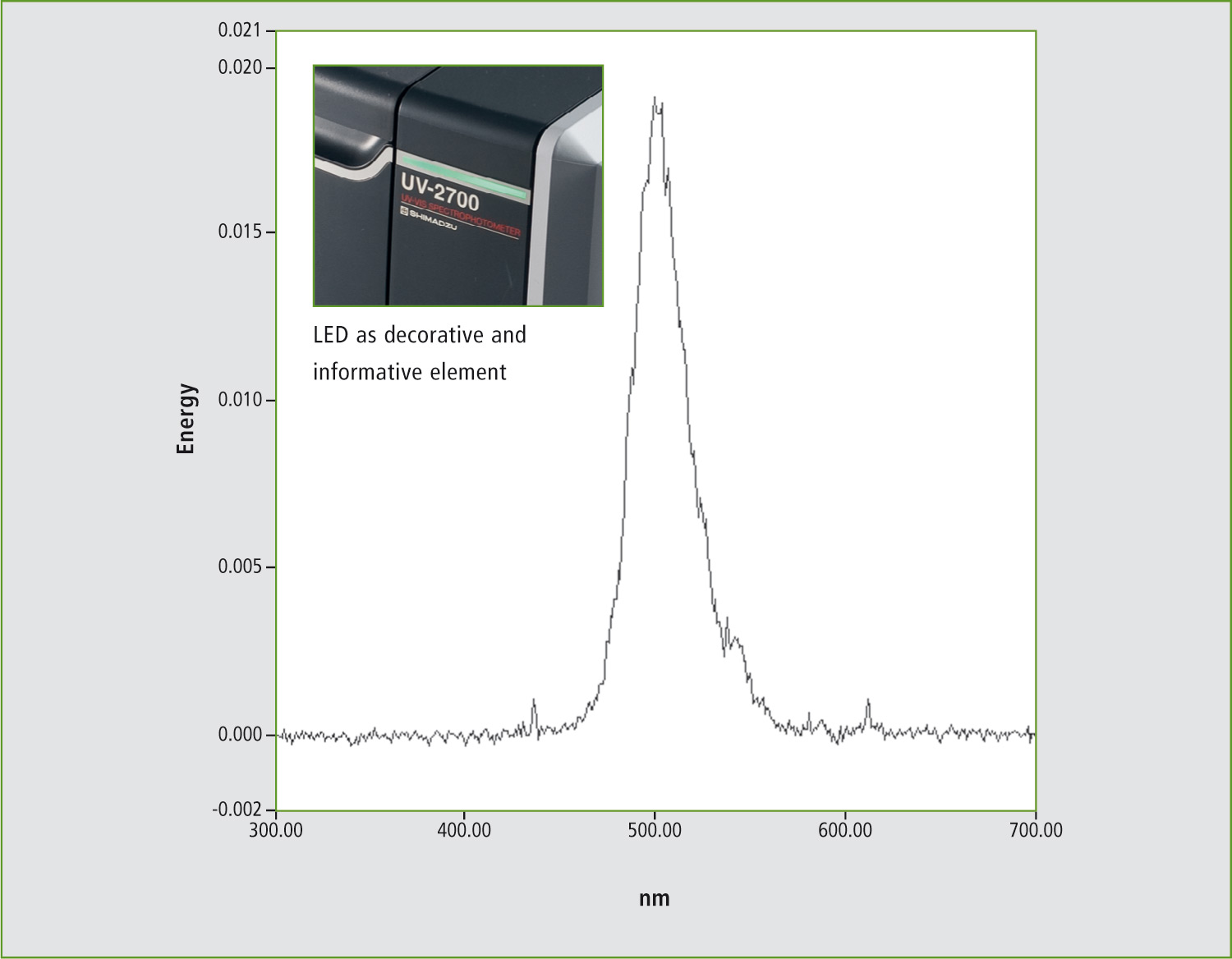 Figure 4: LED as decorative and informative element on a Shimadzu UV-VIS UV-2700 spectrophotometer and its visible spectrum from 300 to 700 nm

As luminescence is an emission phenomenon, its light intensity can be characterized via emission measurement. Emission measurement using UV-VIS spectroscopy enables the determination of intensity, color, signal half-width or the dominant wavelength.

The literature shows that doping with rare earth salts results in a colorful LED world. It has been demonstrated that for the colors green and blue, gallium, indium or mixtures of both can be applied [1], [2].

To classify the intensity, the detection sensitivity can be adjusted via the detector. In this application, measurements were carried out using Shimadzu’s UV-2600, equipped with an emission fiber optics probe (figure 5). LEDs from everyday life were used as samples (figures 1 to 4). 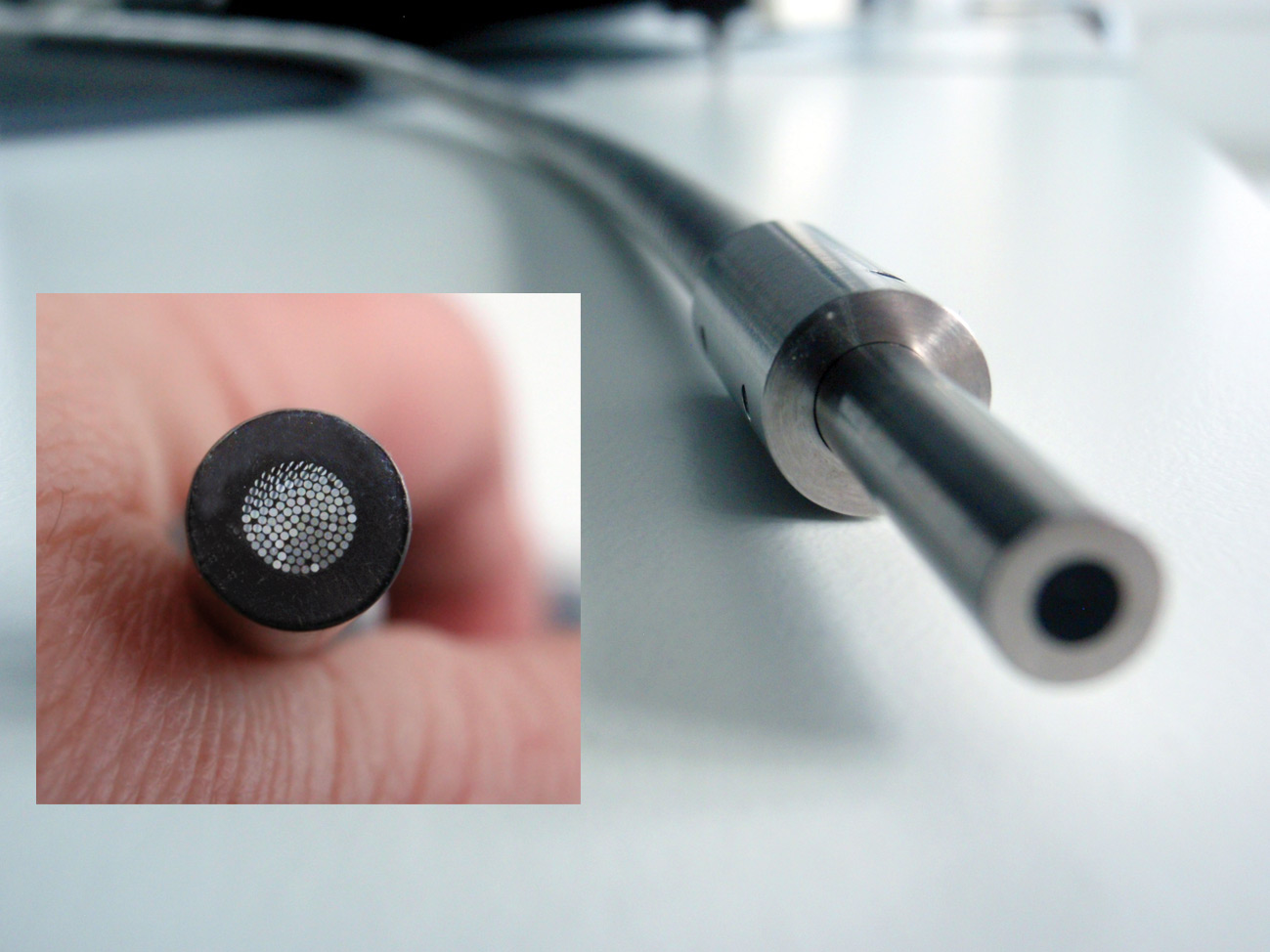 Figure 5: Shimadzu’s fiber optics – emission probe – and in the zoomed image the bundle of optical fibers used to record the emissions

The emission fiber optics probe is placed directly over the light source on the instruments. The surrounding area was not obscured. Influences by fluorescent lamps of the room lighting system cannot be excluded but are considered to be minimal. The results are summarized in table 1. The analytical wavelength of the single-color LEDs is determined by the chemical doping agents used.

Table 1: LED sources, their color and their characterization as determined via emission measurement in the UV-VIS measuring range. *Maximum amplification level 6 is used for utilization of the photomultiplier.

With the help of the emission optics accessory, LEDs can be checked easily and quickly, and qualified in their built-in state. Other light sources can be tested directly using this accessory.