Reactive and conventional pyrolysis GC-MS using the GCMS-QP2010 Plus

Several newer classes of thermosets and high performance polymers are developing quickly, motivated by ever-changing requirements combined with growing industrial interest and commercial demand. As an example, newer polymers based on phenolic resins, even a century after their introduction, are still expected to be applicable in the high-tech aerospace industry. This is due to good to excellent thermo-structural heat and flame resistance, desirable chemical resistance, excellent electrical insulating properties, improved ablative properties and, last but not least, due to the relatively low production cost. For similar specific key properties, newer polyimides and epoxy resins are also in demand in many engineering areas.

As new products and applications continue to emerge, analytical science needs to be prepared to characterize such polymers with up-to date instrumentation. Reactive pyrolysis and conventional pyrolysis can be applied as solutions.

Pyrolysis techniques in combination with GC-MS have become important tools for the characterization of polymers and polymer additives. Reactive pyrolysis can be seen as the smaller brother of fundamental analytical pyrolysis with the difference that a reagent is added to the polymer in order to selectively cut the target molecules and identify the remaining reaction products.

In comparison: conventional and reactive pyrolysis

Tetramethylammonium hydroxide (TMAH) at a concentration of 25 weight % in methanol is the most abundantly used reagent for reactive pyrolysis, being a very strong base and therefore finding its application in selective hydrolytic cleavage of the sample. As a benefit, the same hardware configuration can be used for reactive pyrolysis as well as conventional pyrolysis.

For these measurements, the PY-2020iD thermal desorption unit from Frontier Laboratories Ltd. was used equipped with a 48 position auto sampler connected to a GCMS-QP2010 Plus from Shimadzu. A special metal capillary separation column (Ultra ALLOY-5; 0.25 mm inner diameter x 30 m, Frontier Laboratories Ltd., Japan) coated with a thin (0.25 µm) film of diphenyl-dimethylpolysiloxane was used to separate the pyrolysis products.

This pyrolysis improves analytical reproducibility through quick heat transfer towards the sample by a free-fall injection in the furnace of a deactivated stainless steel sample-cup containing a few mg of sample. The hardware combination of the autosampler with the programmable furnace enables optimizing of pyrolysis instrumental parameters while reducing memory effects by using a system conditioning program. However, to avoid carry-over problems, it is essential to check the cleanness of the sample path between 2 samples by injecting a sample blank. The initial procedure (pyrolysis or reactive pyrolysis) is then followed by GC-MS analysis to separate and identify released chemicals.

Figure 1 shows reactive and conventional pyrograms of a 2-component maleimide-allylphenol formulation, an addition-cure phenolic resin. These resins cure by double bond Alderene reactions and have the advantage that they cure at moderate low temperatures without the production of volatiles, thereby creating void-free products. 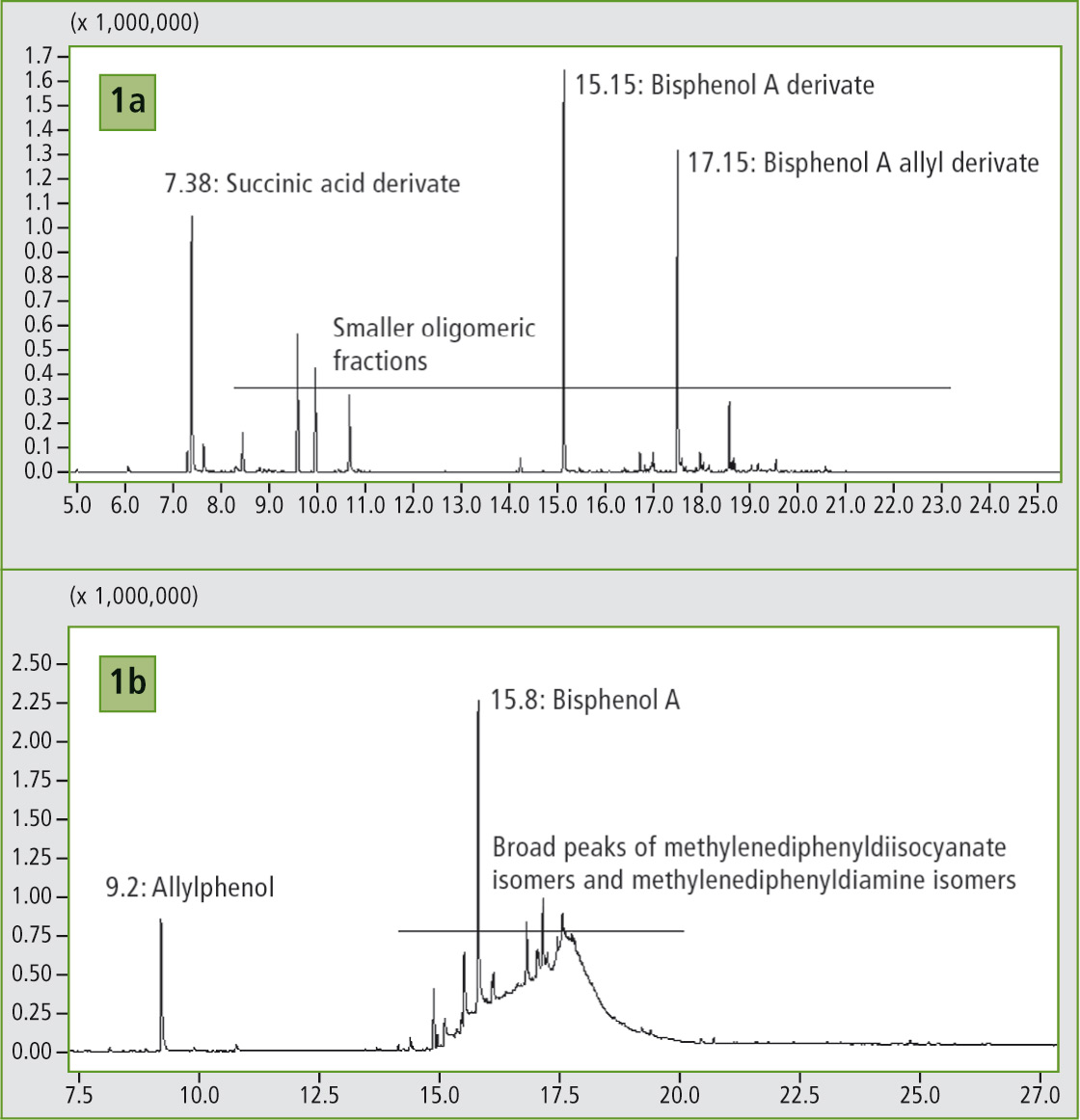 In the reactive pyrogram (figure 1), the most intense emissions are the dimethylether and allyl derivates from bisphenol A, smaller oligomeric fractions and succinic acid dimethylester.

The main emissions in the conventional pyrogram (figure 1, lower picture) are allylphenol, bisphenol A, methylenediphenyldiisocyanate isomers and methylenediphenyldiamine isomers (broad peak). After combining results, this resin was identified as a reactive blend of 4,4’-bismaleoimido diphenyl methane with 2,2’-diallyl bisphenol A (figure 2). This phenolic resin formulation cures in addition by copolymerization of maleimide and alkyl groups as the major reaction. 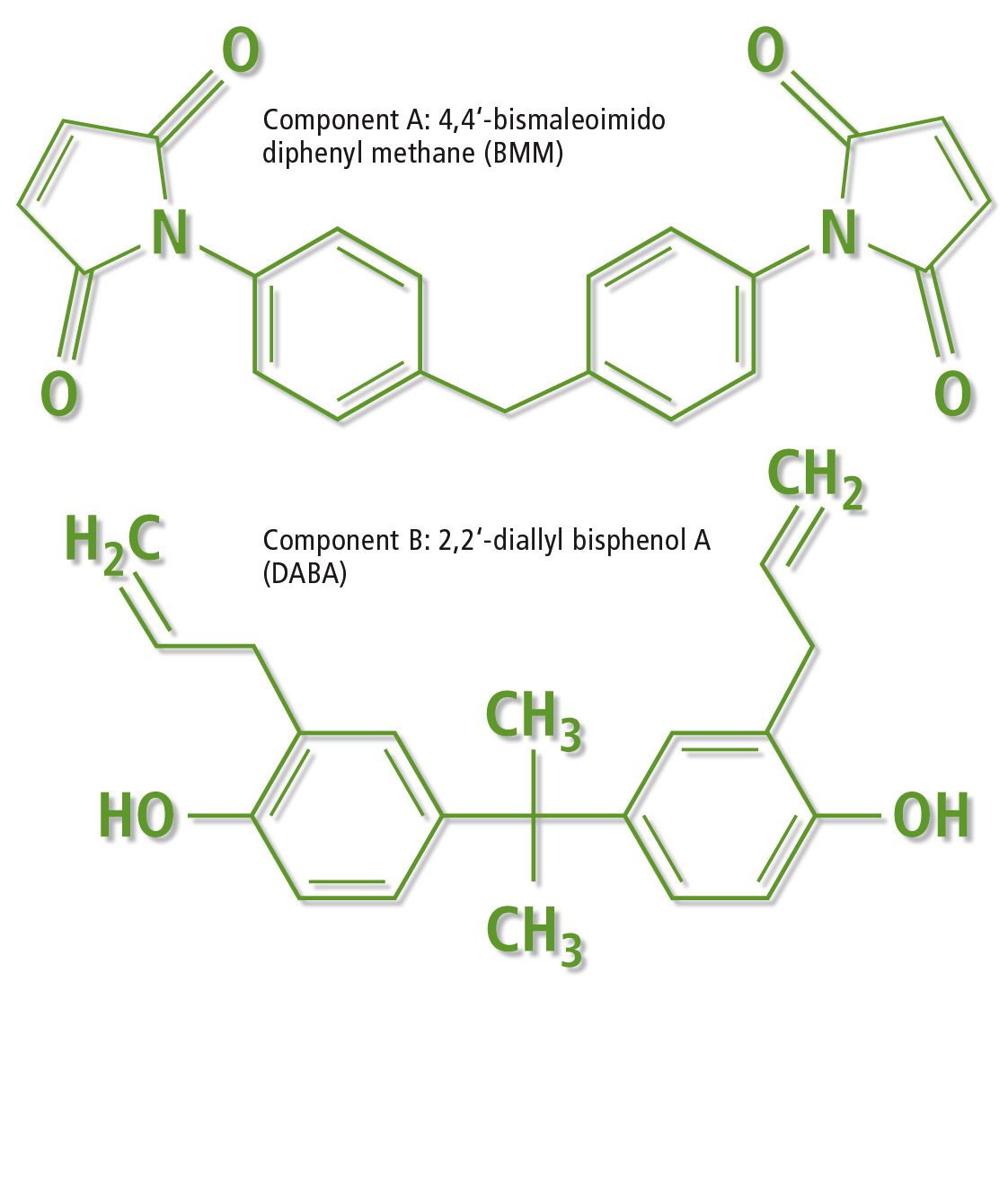 Figure 2: Chemical structure of the two monomers before curing 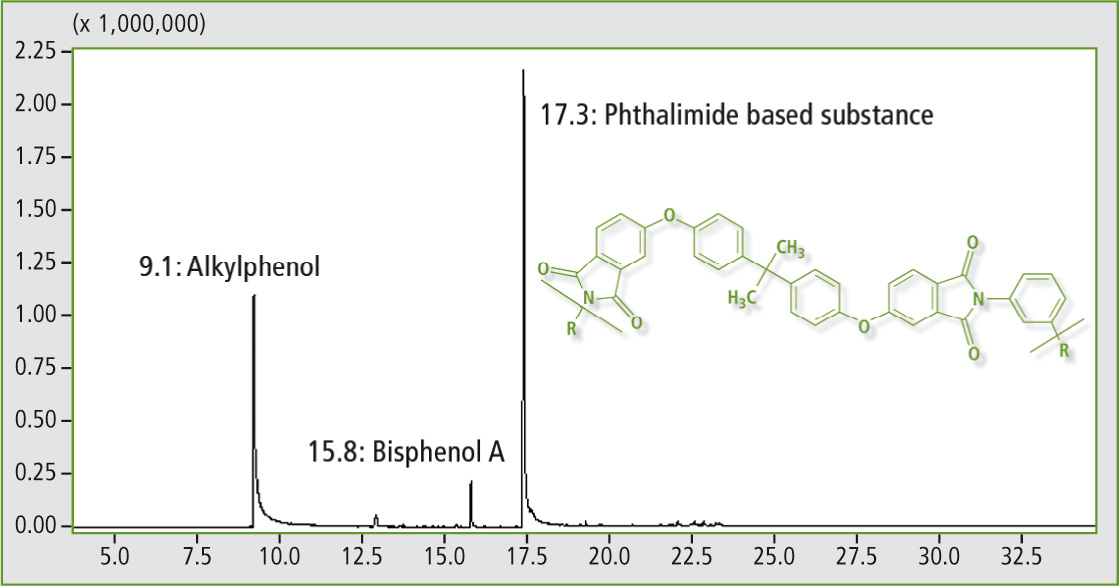 Figure 3 shows the conventional pyrogram of a polyetherimide sample with main emissions coming from phthalimide based substances, bisphenol A and alkylated phenols. Polyetherimide has similar characteristics to polyether ether ketone (PEEK). While cheaper, its application temperature and impact strength are lower.

Reactive pyrolysis and conventional pyrolysis can be used for defect analysis by comparing a defective polymer with a reference polymer. Using this comparative analysis, differences appearing in the pyrograms may relate to the reason for the targeted defect. In the reactive pyrograms in figure 4, two polyurethane samples were compared with different flame resistance properties.

Figure 4: Reactive pyrolysis data after comparison of two polyurethane samples with different flame resistance properties. In the defect sample no tetrabromobisphenol A derivates (flame retardant) were detected (each triple measurements).

Dimethylether of tetrabromobisphenol A was detected in the polyurethane with higher flame resistance using reactive pyrolysis. Tetrabromobisphenol A is a commonly used flame retardant in many polymer applications and can be reactively bounded into the polymer chain. In addition, reactive pyrolysis performs well when considering reproducibility of results as shown in figure 5, where a polyether polyol distribution of a polyurethane sample is shown after triple measurement compared to a polyurethane sample without a polyether polyol in the polymer backbone.

Chemical analysis of thermosets is an ambitious task using conventional spectral techniques. As an example, Fourier transformed infrared spectroscopy (FTIR) gives poor information about the sample, since a variety of possible chemical structures can make typical resonation frequencies of target structures. Reactive and non-reactive pyrolysis can be more applicable as these techniques selectively cut certain bonds and the chemicals obtained can give the analyst an image of initial substances used.

The combination of reactive and conventional pyrolysis seems to be a very powerful tool for the characterization of thermosetting polymers with a complex cross-linking system.

In addition, reactive pyrolysis can re-order or simplify data obtained from thermosets very close to the initial monomers. In some cases pyrolysis can be used as a tool for defect analysis where the problem with the material is based on composition of the polymer.