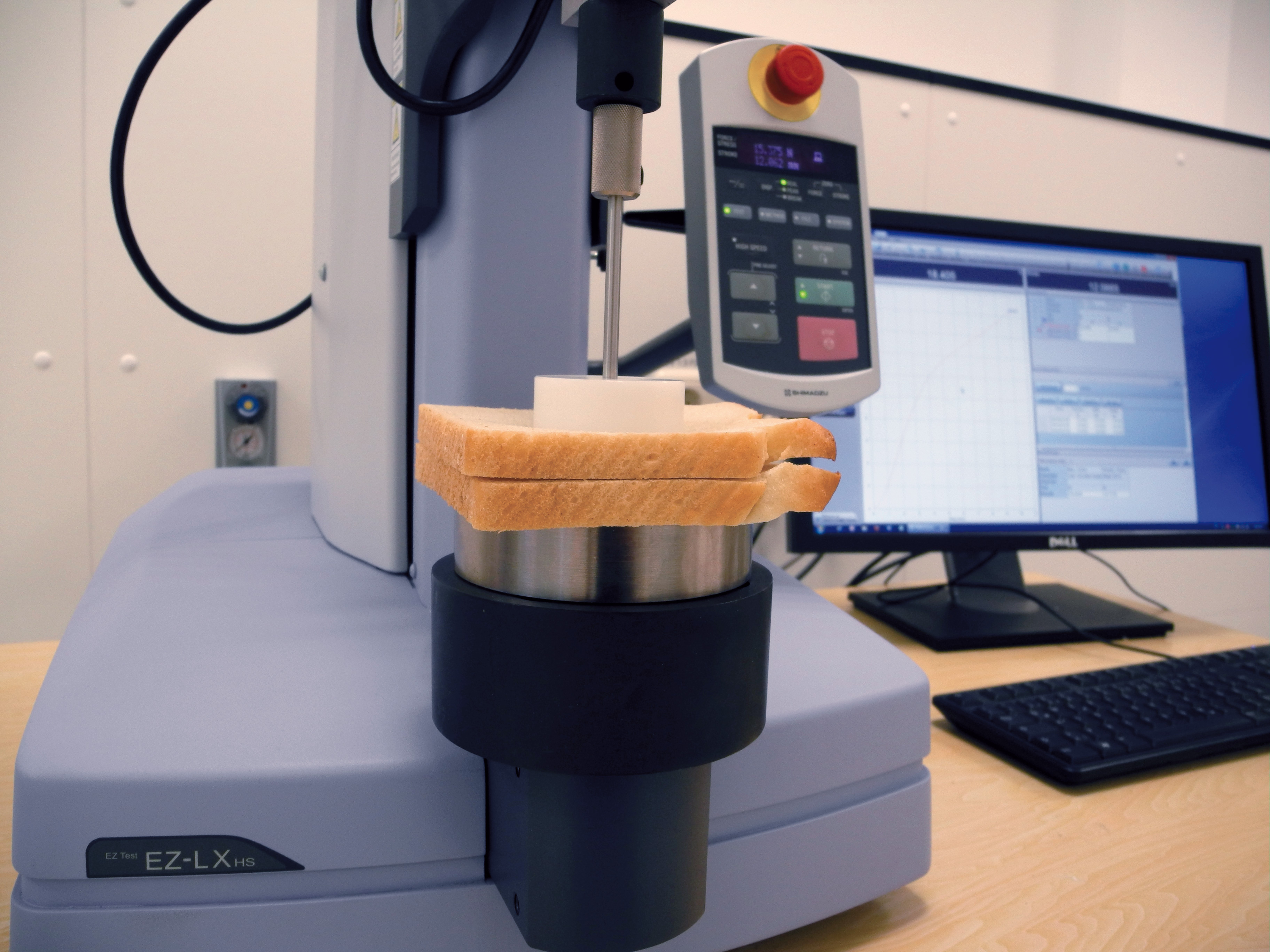 Foods as a basic need of human existence are subject to constant inspection. The Shimadzu News reports regularly on new analytical capabilities.

In addition to taste and the inspection of ingredients, questions are always raised on the physical properties of our food: how quickly does our bread get stale? How crisp are our sausages? What are the differences between eggshells originating from different egg farming methods? … These are the questions that will be addressed in this and in subsequent issues of the Shimadzu News – using the foods that make up a continental breakfast.

Bread has been a basic food in the Western world for thousands of years. With an average bread consumption per capita of approximately 66 kg/year, Europe holds a leading position in the worldwide consumption of bread. With nearly 70 percent, fresh baked bread dominates, prior the frozen bakery products, fast food bread and long-life bakery products.

Bakery or supermarket – which offers the freshest products?

It is not surprising that freshly baked goods are usually found at the European breakfast table. Depending on local tastes, these could be breads, baguettes or ciabattas; the main issue is the freshness of the products. In addition to traditional bakeries, freshly baked goods from on site baking ovens are increasingly being offered in supermarkets.

Yet, how fresh are these baked goods and are there any differences in texture and shelf life? Shimadzu has tested several baked goods from a bakery and supermarket chosen at random.

To get upon the freshness’ track

Various baked goods were subjected to a compression test using the EZ Test-X Texture Analyzer, where pressure plates simulate a pressure test applied with the palm of a hand. In this way, the stiffness/chewiness of the crust as well as the crumb is tested. The baked goods were removed from their commercial packaging, and each set was tested one hour after purchase, thereafter 24 hours and 72 hours after purchase:

As expected, a very strong increase in the texture of all breads has been measured. This is mainly due to drying out of baked goods that were packaged in paper bags. Only in the case of the crusty rye bread bought at the supermarket could a lower value be measured after 24 hours of storage.

As a slight increase could also be measured for the crusty bread obtained from the bakery, it can be concluded that the crumbs in these baked goods have a much higher moisture content compared to the small baked goods. This ensures that the bread dries out much more slowly. For baked goods from the discount supermarket, the crust apparently softened over 24 hours. This is why a decrease in force was registered. This could, however, also indicate that the baking time was too short so that the bread was not completely baked.

Overall, it can be concluded that the measured values for products purchased at the supermarket and the bakery were similar and were still edible after 24 hours. Significant changes could only be observed after 72 hours. Many products had by then become so hard that they were no longer fit for consumption. Another proof of why Europeans like to enjoy their baked goods freshly baked each day …

*For those of you who cannot wait for the next breakfast test, the entire text can be downloaded in advance.