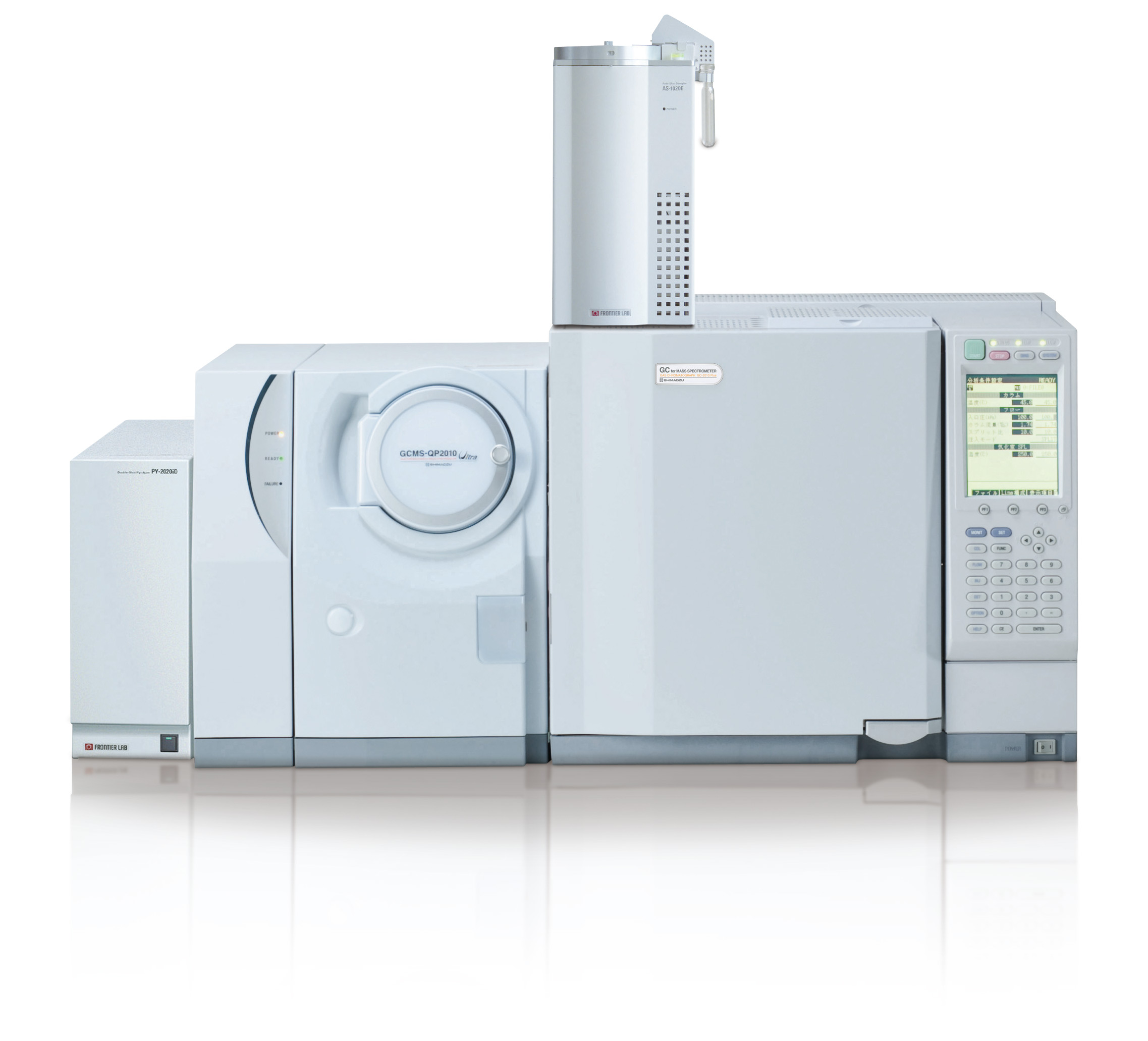 Synthetic polymers or plastics are omnipresent. They are processed into products such as polyethylene garbage bags, polypropylene bicycle helmets or highly specialized materials for medical technology, sports, construction or research.

Initially, they were only used as substitutes for valuable or rare materials. But they also possess unusual properties that other materials do not offer. For instance, plastics can be tailored to specific application areas in order to attain certain chemical, mechanical or electrical characteristics. This is achieved through selection of starting materials, the addition of additives and the production process. Chemical additives such as antioxidants, stabilizers or flame-retardants can change the characteristics of a product already in very low concentrations.

Expectations of the material properties of plastics are high – depending on the application area, they should be resistant to weathering, shape-and-temperature stable, inert to solvents, and fire resistant. This is why verification of the desired properties during material development or post-production control is of great interest.

Physical and chemical test methods help to characterize polymer properties. In order to determine the chemical composition of a plastic or the type of additive used, specialized progressive analytical methods are applied.

Pyrolysis GCMS (coupled gas chromatography-mass spectrometry) is an excellent technique for the analysis and characterization of polymers. Using this technique, which avoids time-consuming sample preparation, minimal differences between two samples such as impurities or fluctuating concentrations of the starting materials and additives can be detected.

During pyrolysis GCMS, approximately 200 µg of the sample material is decomposed directly in a preheated furnace at temperatures between 400 and 800 °C typically. The resulting pyrolysis products are separated chromatographically on a GC capillary column and subsequently detected using a mass spectrometer. Due to the way of sample introduction and the chromatographic separation, it is possible not only to analyze very small amounts but also to obtain valuable, detailed additional information – in comparison with other methods in polymer analysis such as FTIR, TGA or HPLC.

Characteristic chromatograms or ‘pyrograms’ are obtained using a flame ionization detector (FID) as well as via mass spectrometry detection. These pyrograms act as ‘fingerprints’ and are used to identify polymers unequivocally via comparison. When using an FID, it is only possible to use retention times for the identification of individual peaks. Mass spectrometry detection yields a mass spectrum for every peak, providing information on the structure of a substance. By comparing the mass spectra with those stored in specialized libraries, individual components can be definitely identified. Using characteristic mass traces, it is also possible to detect and quantify very low concentrations of substances in highly complex pyrograms.

The following example demonstrates the performance of a pyrolysis GCMS system in the detection of traces of a compound in a polymer sample. Figure 2 shows the pyrogram of an elastomer sample A. The sample is a butyl rubber (copolymer of 95 – 99 % isobutene and 1 – 5% isoprene). Elastomer sample D is a pure butadiene rubber (see figure 3), which is used widely in the rubber world. Sample C is also a butadiene rubber, as can quickly be identified based on its virtually identical fingerprint (see figure 4). But this elastomer is a blend of butadiene and butyl rubber. The concentration of the butyl rubber is between 0.5 – 3 %, which is in the trace range. Is it possible to detect this minimal amount in the pyrogram of sample C? 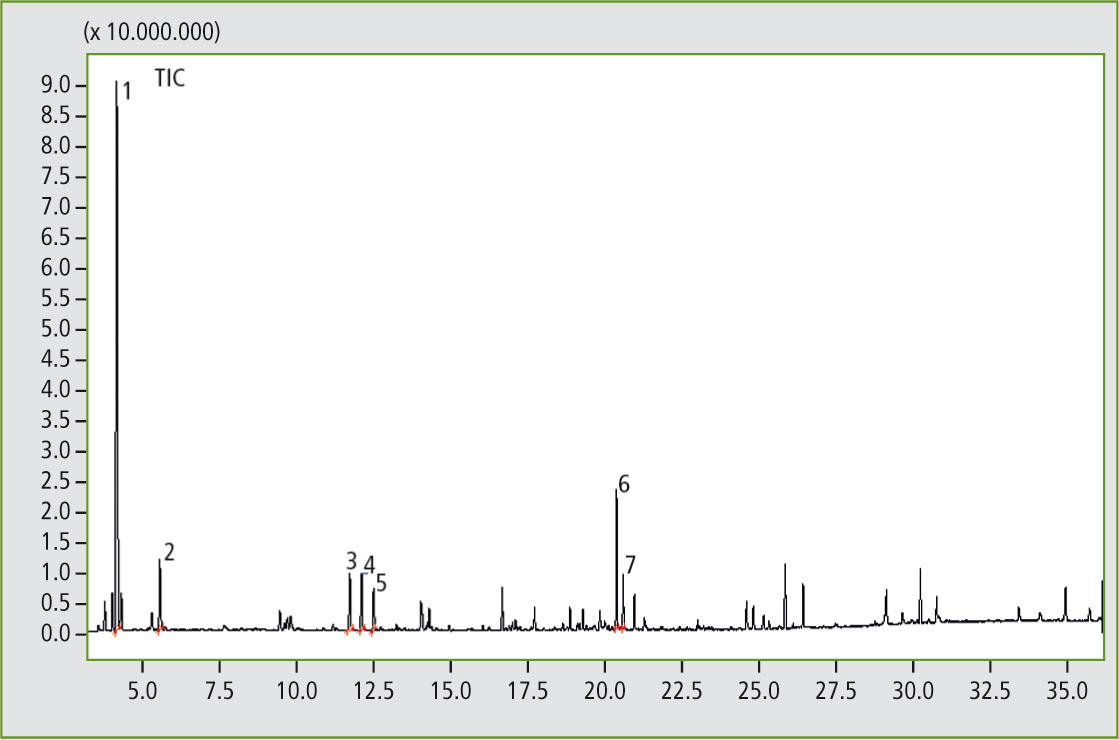 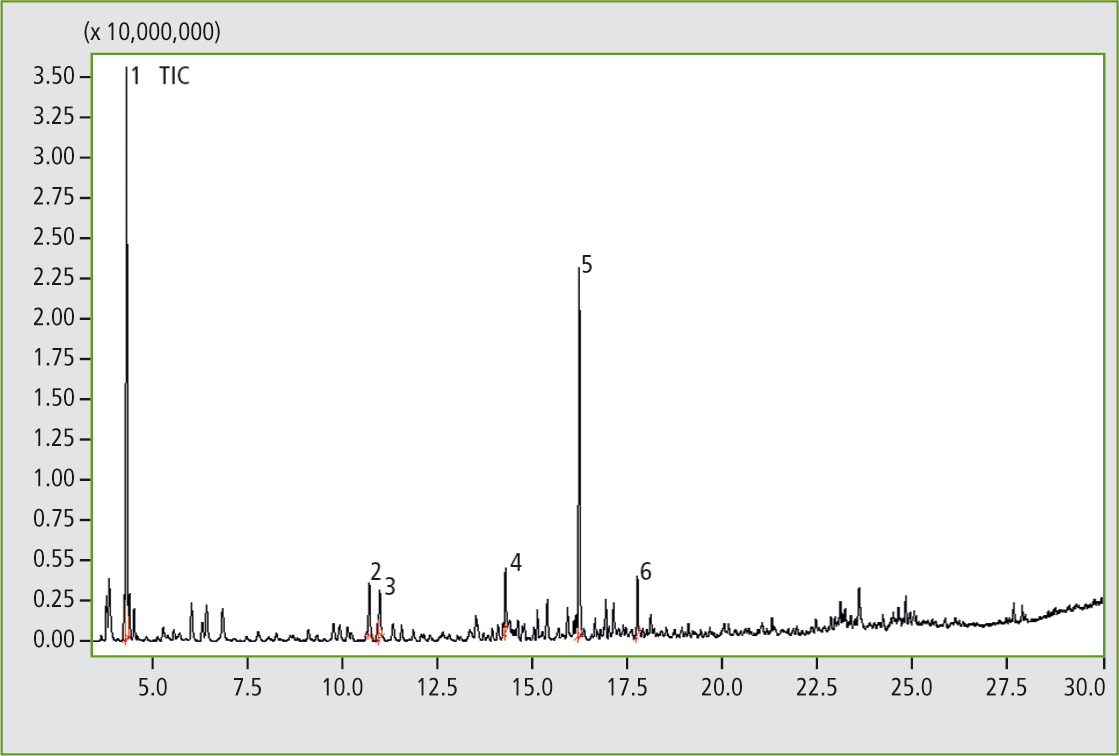 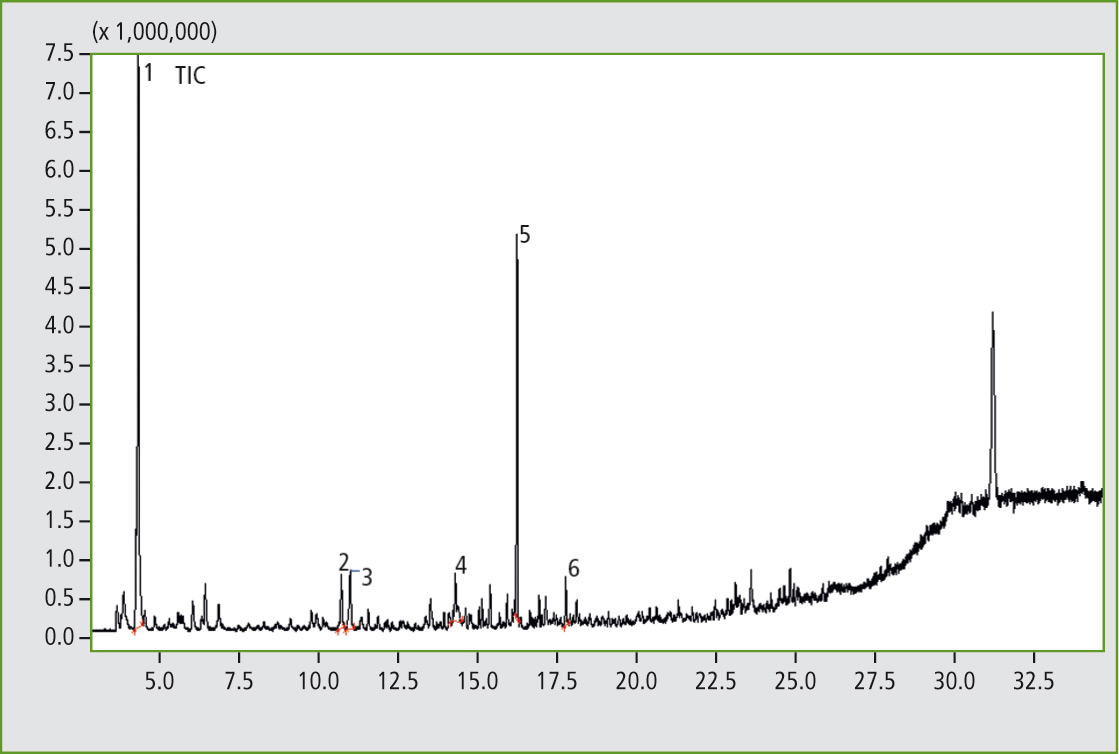 The pyrograms of the three samples were directly compared. When looking closely at individual enlarged sections, peaks can be found in sample C that are unequivocally identified as pyrolysis products of a butyl rubber.

To illustrate this peak assignment more clearly, a certain mass trace (here: m/z 112) is calculated from the TIC (total iron current) and the corresponding section of the pyrogram is enlarged. At retention times 12.17 and 12.56 seconds, there are two peaks that can only be detected in sample A (black mass trace) and in sample C (red mass trace) but not in sample D (blue mass trace) – see figure 5.

Comparison of the mass spectra in figures 5a and 5b shows that it is clearly the same substance. In this way, additional peaks can be found that confirm the presence of traces of butyl rubber in the butadiene rubber (see figures 6 and 6a). 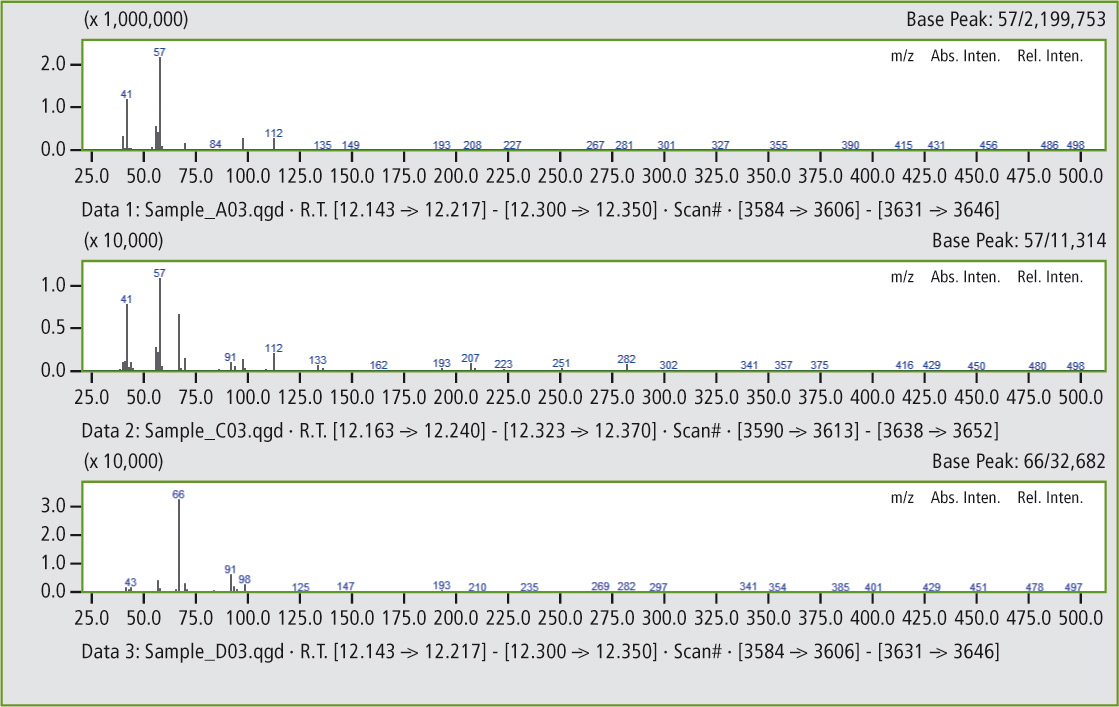 Figure 5a: Comparison of mass spectra of the peaks at 12.17 minutes 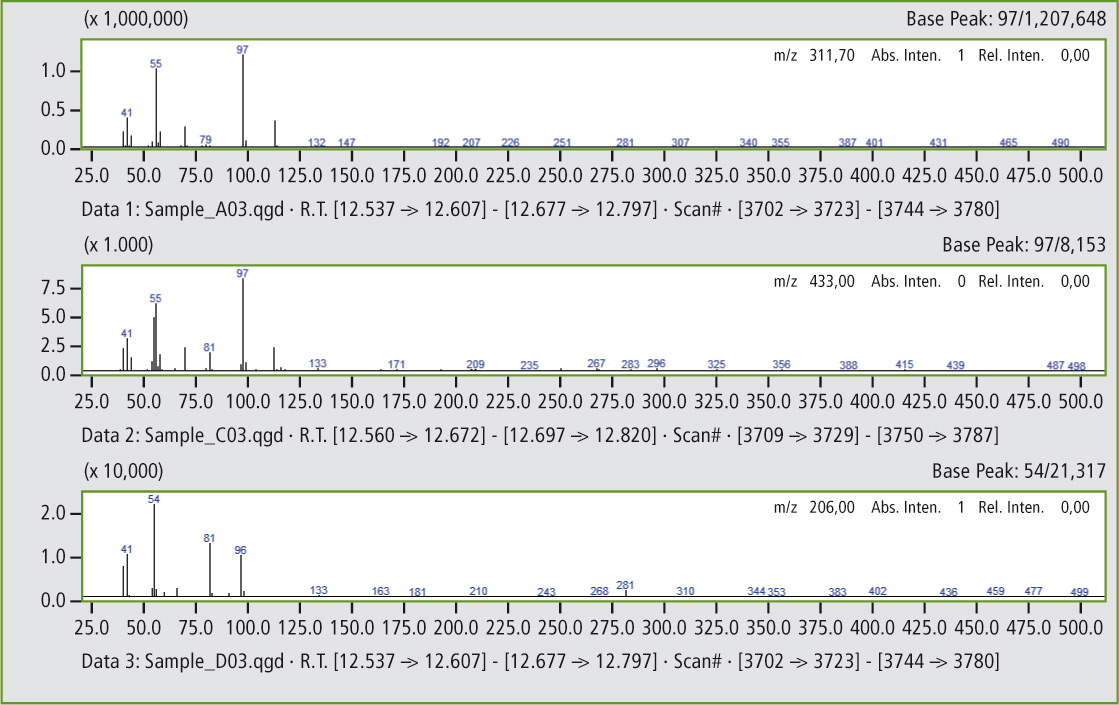 Figure 5b: Comparison of mass spectra of the peaks at 12.56 minutes 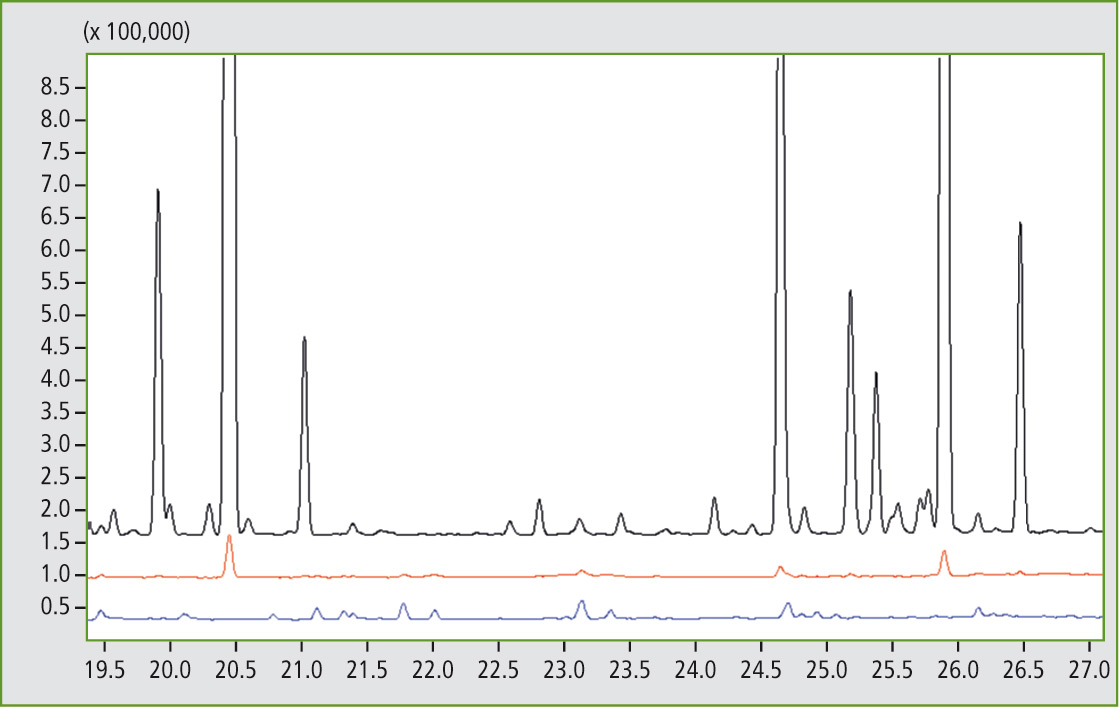 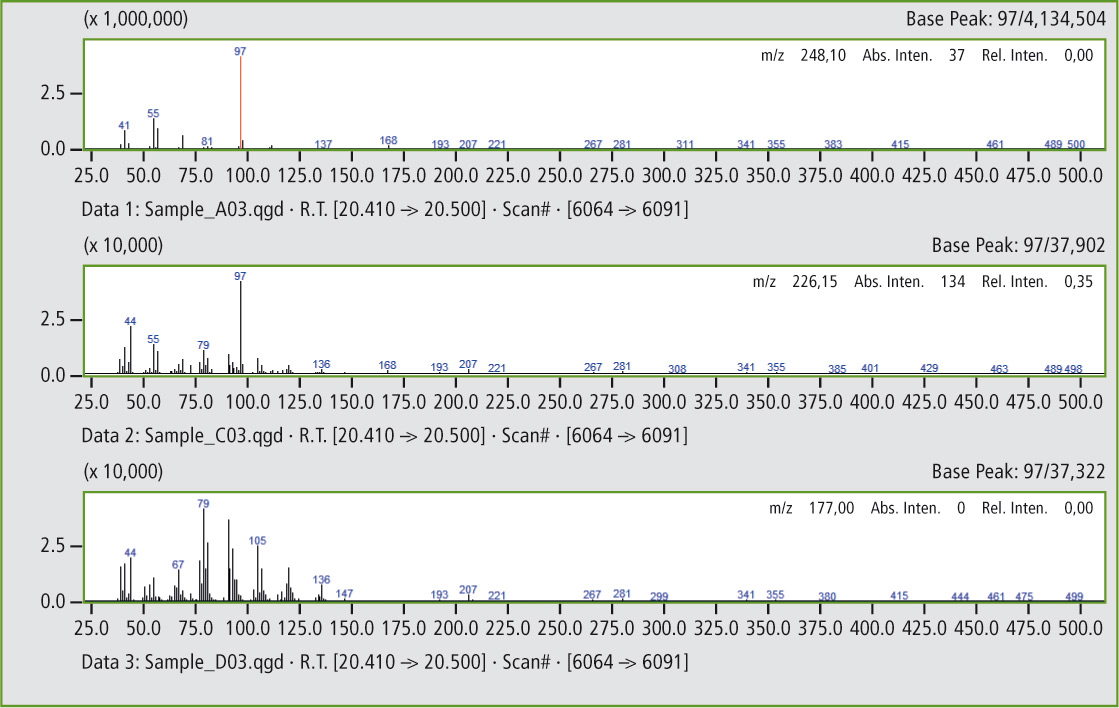 Figure 6a: Comparison of the mass spectra of the peaks at 20.45 minutes

An important requirement for this efficient trace analysis is data reproducibility. In pyrolysis, this depends greatly on the heating-up time of the sample.

Characteristic for a furnace pyrolyzer is the preheated, accurately temperature-controlled furnace in which the sample falls (free fall) and is heated in a fraction of a millisecond. The sample is placed in a deactivated stainless steel cup that is cleaned quickly and easily via red heating with a small torch.

Due to the minimal heating-up time, the loss of volatile components is prevented and high reproducibilities can be achieved. The optimized interface between pyrolyzer and gas chromatograph minimizes dead volumes and cold spots, thereby preventing poorly reproducible peaks.

Figure 7 demonstrates the excellent reproducibility of the pyrolysis GCMS system in eight consecutive measurements of a styrene-butadiene polymer blend. If desired, the system can be equipped with an additional FID (flame ionization detector). Reproducibility measurements of the styrene-butadiene polymer blend were also carried out using this detector. 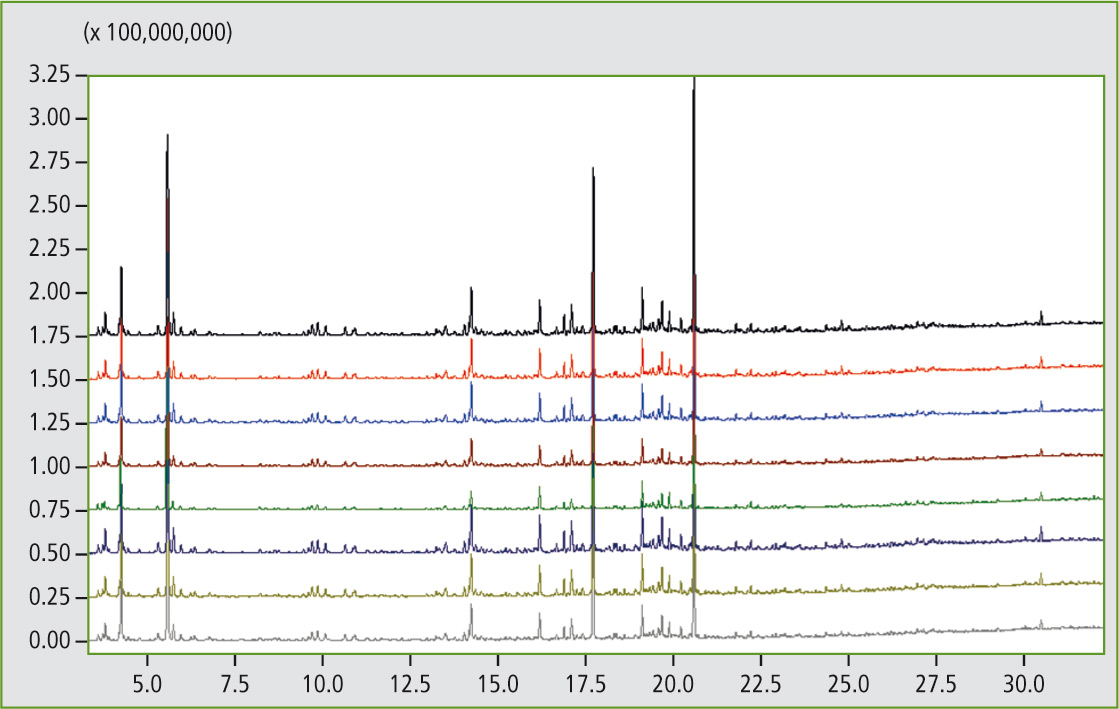 Table 1 lists some statistical details of the evaluation of one significant peak (peak C: butadiene dimer). Quantification was carried out via the area normalization or area % method, which can yield very good results even when the individual samples could not be weighed. For quantitative analysis of pyrolysis GCMS data, quantification of characteristic SIM mass traces (single ion monitoring) using the internal standard method is recommended. 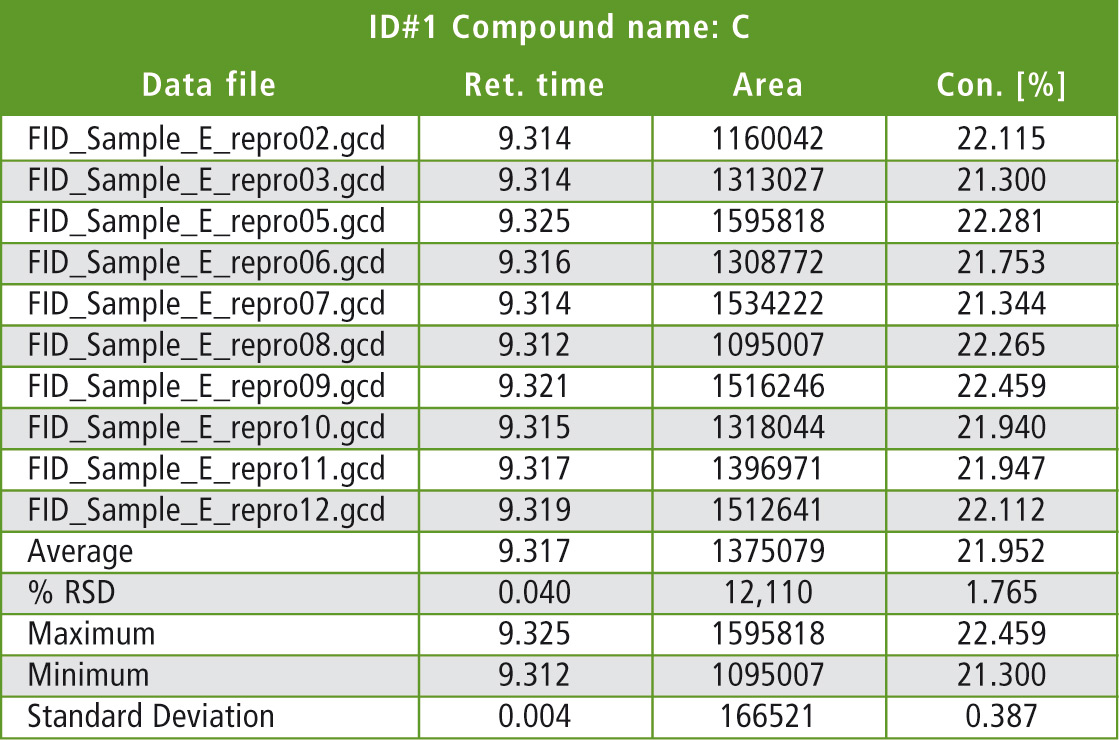 For all measurements shown here, an autosampler was used to introduce the samples in the EGA/PY-3030D pyrolyzer. Autosamplers offer a great advantage when many samples need to be analyzed. The sample carousel can be loaded with 48 stainless steel cups, and programming of a sequence table takes place via a simple, user-friendly interface.

Pyrolysis GCMS is a modern, high-performance technique for accurate characterization and quantification of synthetic polymers and biopolymers. The application possibilities are extensive and range from plastics manufacturing and processing, automotive and paper industry, wood and resins analysis to paints, varnishes, adhesives and applications in forensics, art and archaeology.

This application provides just a glimpse of the capabilities of the EGA/PY-3030D pyrolyzer furnace. Using the specialized samplers, it is also possible to select various sampling methods such as the double-shot technique, reactive pyrolysis or sample irradiating with UV-light in order to simulate aging processes. In addition, standard EGA (evolved gas analysis) measurements using an extremely short capillary column without stationary phase are possible, for instance to determine the optimum pyrolysis temperature of a sample.