Ultra-high speed recordings with video cameras such as the Shimadzu Hyper Vision HPV-1 or HPV-2 become a standard tool for characterizing and quantifying high speed events in order to make invisible phenomena visible to the human eye.

Shimadzu’s HPV-1 and HPV-2 enable recordings at up to one million frames per second (fps) while maintaining excellent spatial resolution at any recording speed.

The latest development in this application field is the new Hyper Vision HPV-X High-Speed Video Camera equipped with a proprietary high-speed CMOS image sensor, enabling ultra-high-speed continuous recordings at 10 million frames per second while ensuring no blooming effects. This is a unique feature and a key differentiator in comparison to other high speed camera systems.

In a conventional high speed video camera, the photo diode is scanned pixel by pixel and the signal is read out and written to an external memory. Due to limitations of the output amplifier speed, the effective recording speed will be in the tens of thousands of frames per second, but the pixels are sub-sampled to further increase the speed. This results in an extremely poor resolution in the high speed region. With the high speed CMOS sensor, the photo diode and memory are connected 1 to 1, and with the signal from each frame, all pixels are written to memory simultaneously. Since no sequential readout occurs there is no output amplifier limitation, so high-resolution recording even at ultra-high speeds is enabled. 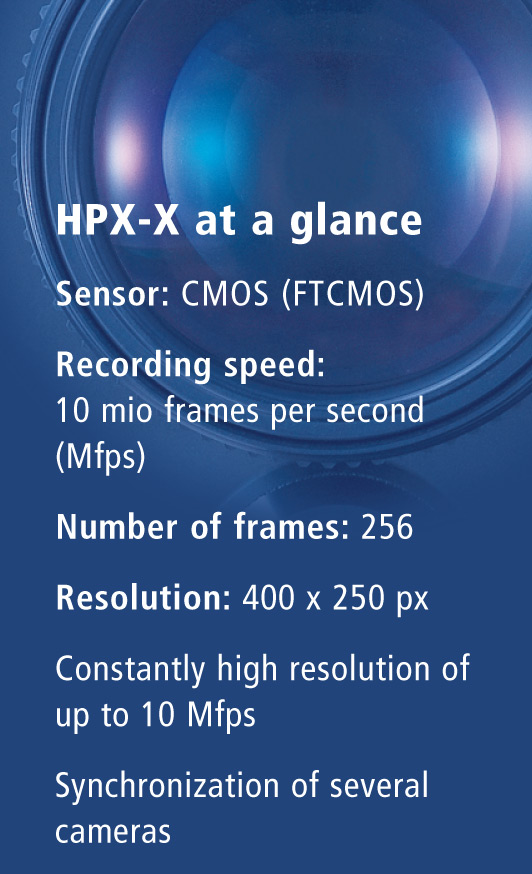 High resolution even at high speeds

The new HPV-X is able to record 128 frames, 20 % more than the HPV-2. In the HP-mode (50,000 pixels), a double-memory function enables recordings of 256 consecutive frames for recording even longer periods. This offers the users the choice of prioritizing either resolution or recording time.

Other high speed camera systems need to lower the resolution as recording speed increases, but the HPV-X maintains the same high resolution even if recording speed is increased. That means that ultra-high-speed phenomena can be analyzed in far more detail than when using a regular high speed video camera. This proprietary feature is included in all Shimadzu Hyper Vision high speed video cameras, but is not available from any other manufacturer. The HPV-X is able to record five million 100,000 pixel images per second or ten million 50,000 pixel images per second.

In contrast to any other high speed camera systems, the HPV-X is very compact and easy to use. Just like the previous models of the Hyper Vision series, the simple system configuration, consisting of the HPV-X camera head connected by cable to a laptop computer, offers a compact and highly portable design that makes on-site setup especially easy. It also retains the same HPV software that has been so popular with current users all over the world, featuring intuitive and easy-to-understand setting screens making it easy to capture ultra-high-speed videos.