Moldy off-odors in fruits and vegetables?

The compound 2,4,6,-trichloroanisole (TCA) is often mentioned in the literature, particularly since H.R. Buser’s publication identified TCA as a key component of the “cork taste” in wine.1 A number of other reports have been published on the sensoric effects on food by TCA and also 2,4,6-tribromoanisole (TBA). In 1990, J.C. Spadone found that 20 % of raw coffee from Brazil was contaminated with TCA.2 Most recently, TBA was in the news regarding product recalls from the pharmaceutical companies Pfizer and Johnson & Johnson who had to withdraw products from the market as a result of contaminated packaging. A robust and sensitive method to determine TBA and TCA in a range of fruits and vegetables exhibiting unwanted moldy off-odours has been developed.

Sensoric Properties and Sources of TBA and TCA

TCA and TBA have an unpleasant moldy off-odour which is registered by humans – even at very low concentrations. These compounds can be perceived at different levels by humans in different food matrices.3 Figure 1 shows the chemical structures of the two compounds. 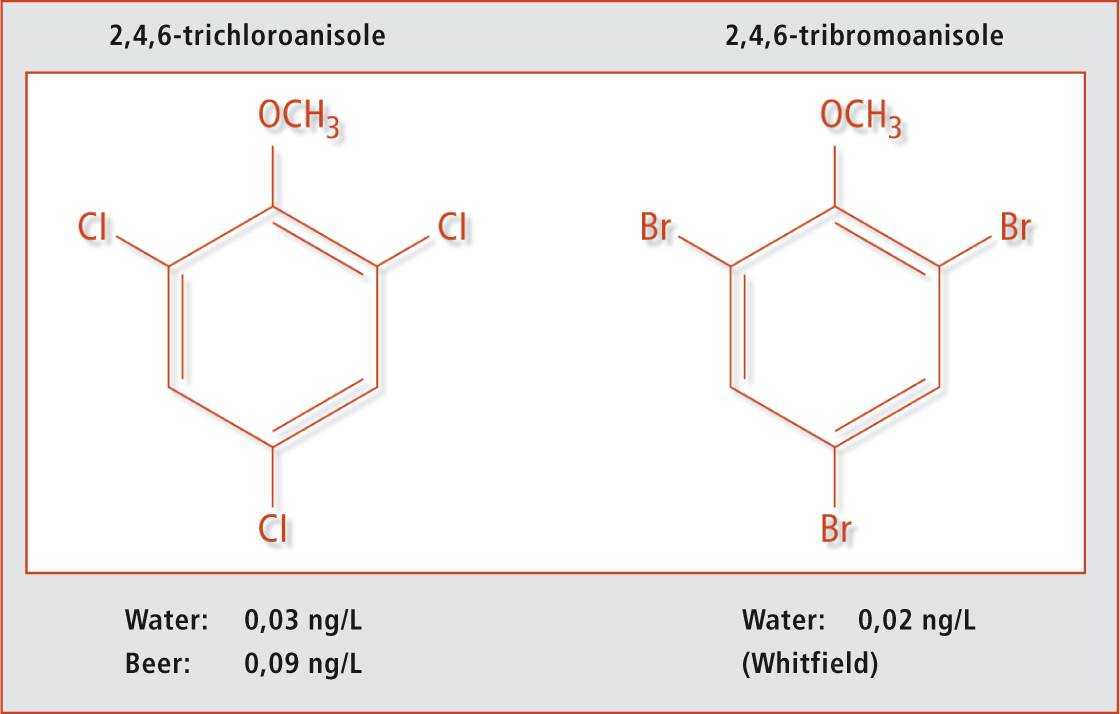 It should be noted that none of these substances were added to the food products intentionally, but both substances are formed from halophenols which are used as bactericides (PCP) during the anti-poisoning process of microorganisms. The formation mechanism could be identified in the production of wine stoppers made of natural cork. A number of microorganisms could be detected both in – and on – the natural cork as a result of the production process. Formation occurs either by direct methylation of trichlorophenol and/or tribromophenol or a methylation reaction after a dechlorination of halide phenols with more than three chlorine or bromine atoms. Of the large number of halide anisoles, TCA and TBA have by far the lowest odour reception level.

Due to the high volatility of the substances, high-resolution gas chromatography (GC) is the method of choice for analysis. An electron capture detector (ECD) or a mass spectrometer is recommended for use in selective and sensitive detection of halide compounds. Initial measurements on different fruits and vegetables with a low resolution quadrupole MS in selected ion monitoring (SIM) mode showed, however, that such a method is not useful in the analysis of real world samples because of massive spectral interferences (see figure 2). 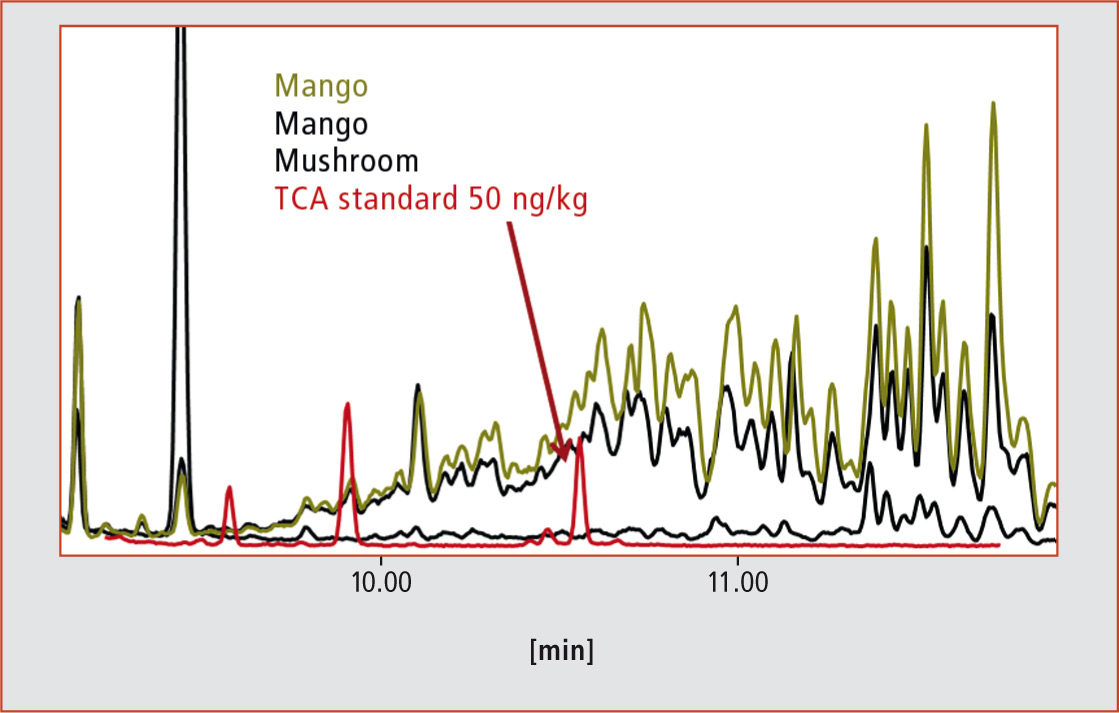 To solve this problem, a combination of multidimensional chromatography (comprehensive GCxGC) with negative chemical ionization (NCI) was used. In comprehensive GCxGC two columns of different polarities are coupled in series. The first column in this set-up usually has conventional dimensions, while the second column is substantially shorter (0.5 – 3 m).

All compounds eluting from the first column are cryo-focused at the 2nd column head by a jet of cold nitrogen gas and subsequently heated up in a constant interval time (modulation frequency, usually 2 – 8 s) by a jet of hot nitrogen gas to be injected into the second column. In this way, peaks from the first dimension are fractionated and additional separation on the second column takes place.

For a better overview of separation, the resulting data are usually shown in so-called contour plots rather than in chromatograms. In a contour plot the retention time on the first column is plotted against the retention time on the second column, with the maximum length of the y-axis being the modulation frequency. Compounds that are shown parallel to the y-axis are not separated in a one-dimensional chromatographic system. In addition, the modulation of the peaks leads to a better sensitivity as the peak width of normally five to six seconds is reduced in a comprehensive system to 200 – 400 ms.

The signal-to-noise ratio (S/N) for 10 ng/kg TCA was increased from 18:1 (electron ionization (EI) in SIM mode) to 72:1 (NCI in SIM mode). If NCI is used in combination with comprehensive GCxGC, a further increase of the S/N to 300:1 is observed, resulting in a quantitation limit of 0.1 ng/kg. The only drawback of this method is the formation of fragments corresponding to the halide atoms (m/z = 35 and 37 for chloroanisoles and m/z = 79 and 81 for bromoanisoles), making the use of deuterated standards impossible. The figure below shows the contour plot of a standard sample with a concentration of 10 ng/kg of each of different haloanisols. Figure 3 shows the contour plots of halide anisols in a real world sample of mango. Sample preparation was performed by automated headspace solid-phase microextraction (HS-SPME) using a 2 cm 50/30 µm divinylbenzene/carboxene/ polydimethylsiloxane fibre at 80 °C for 60 min. Sample amount was 1 g of homogenized material. Calibration range was 1 – 100 ng/kg. 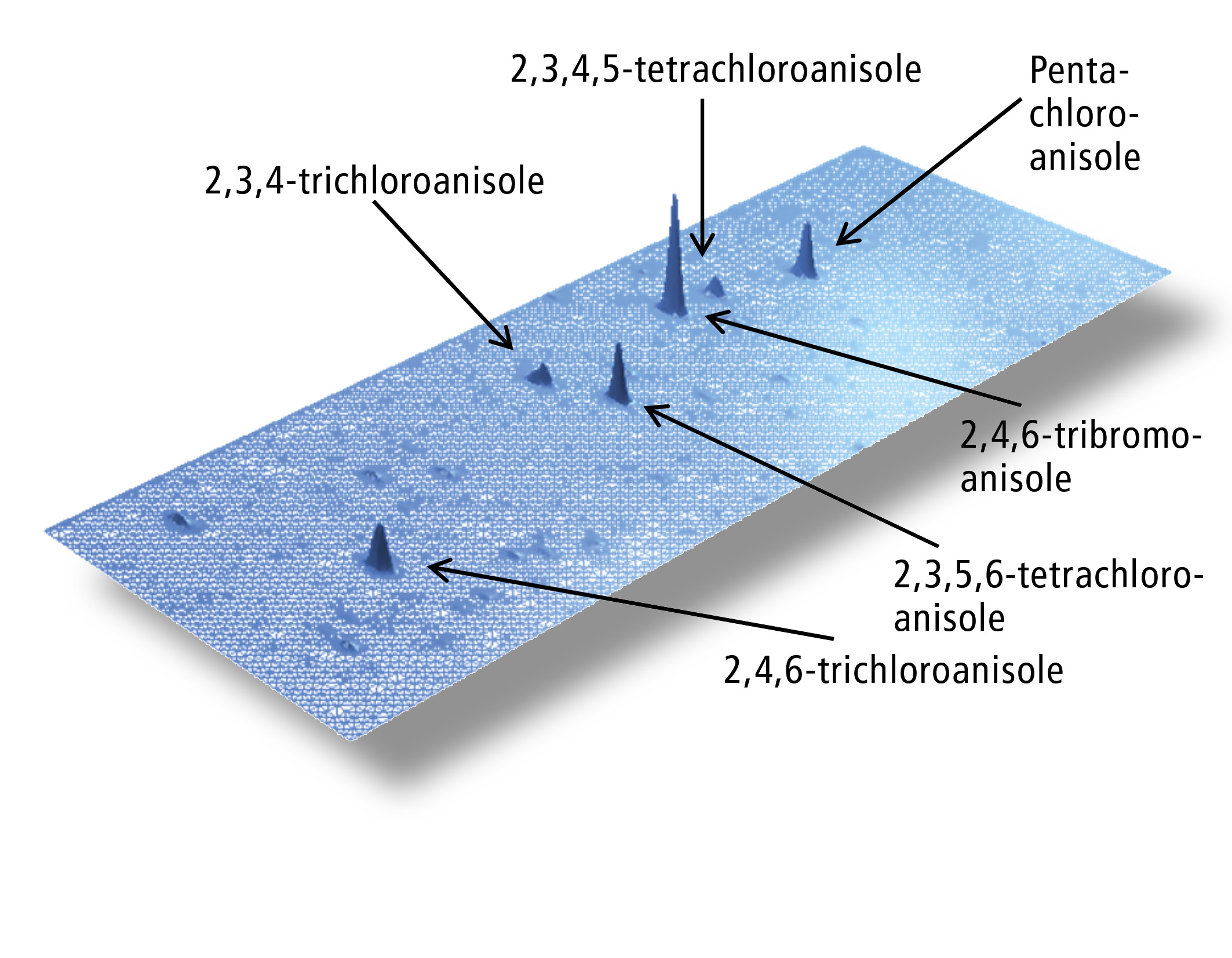 Comprehensive two-dimensional gas chromatography coupled to automated SPME using NCI was shown to be a selective and sensitive method for the determination of the odour active compounds 2,4,6-trichloroanisole and 2,4,6-tribromoanisole. The method is also robust and simple. Determination of the target compounds without any interference from the matrix is possible with this combined method. First results from real world samples (mango, garlic and different types of mushrooms) obtained from a grocery store showed alarmingly high contamination levels. A thorough investigation of different fruits and vegetables is planned. 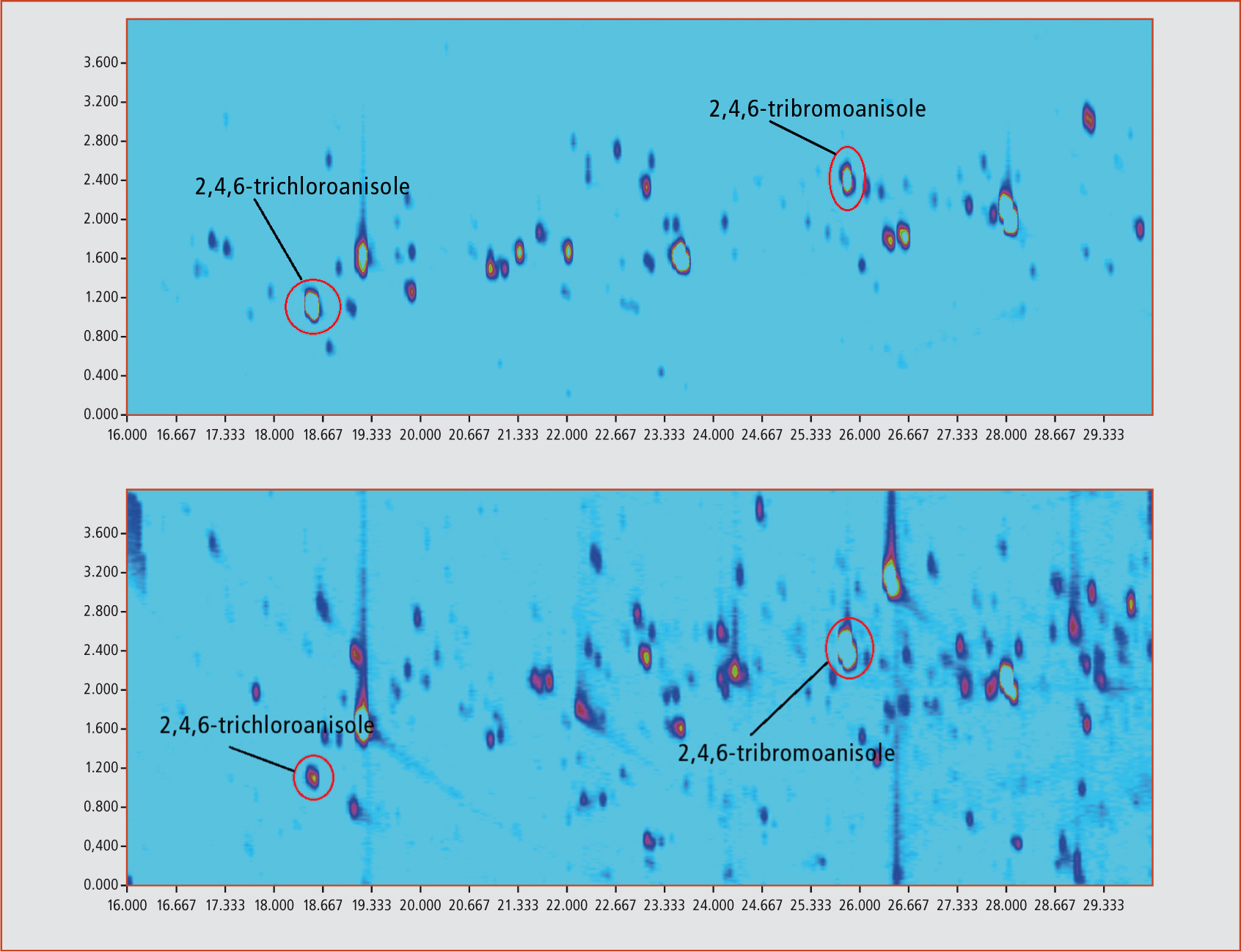 Erich Leitner studied technical chemistry at the Technical University of Graz, Austria, focusing specifically on analytical chemistry. He graduated in 1992 and received a PhD in 2005 in food chemistry.

He has over 25 years of experience in organic trace analysis using gas chromatography-based methods. He focuses specifically on the identification of odour active substances using analytical and human sensory methods.