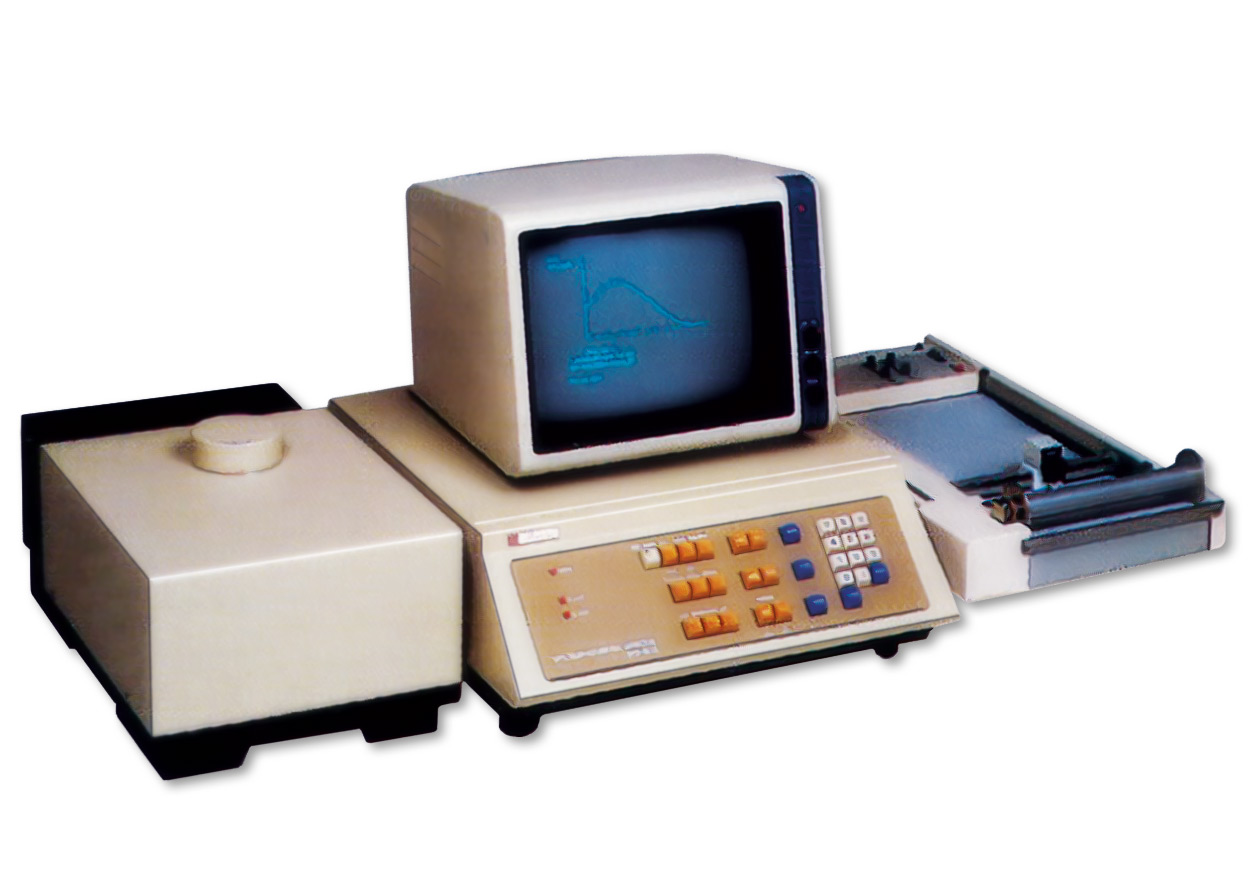 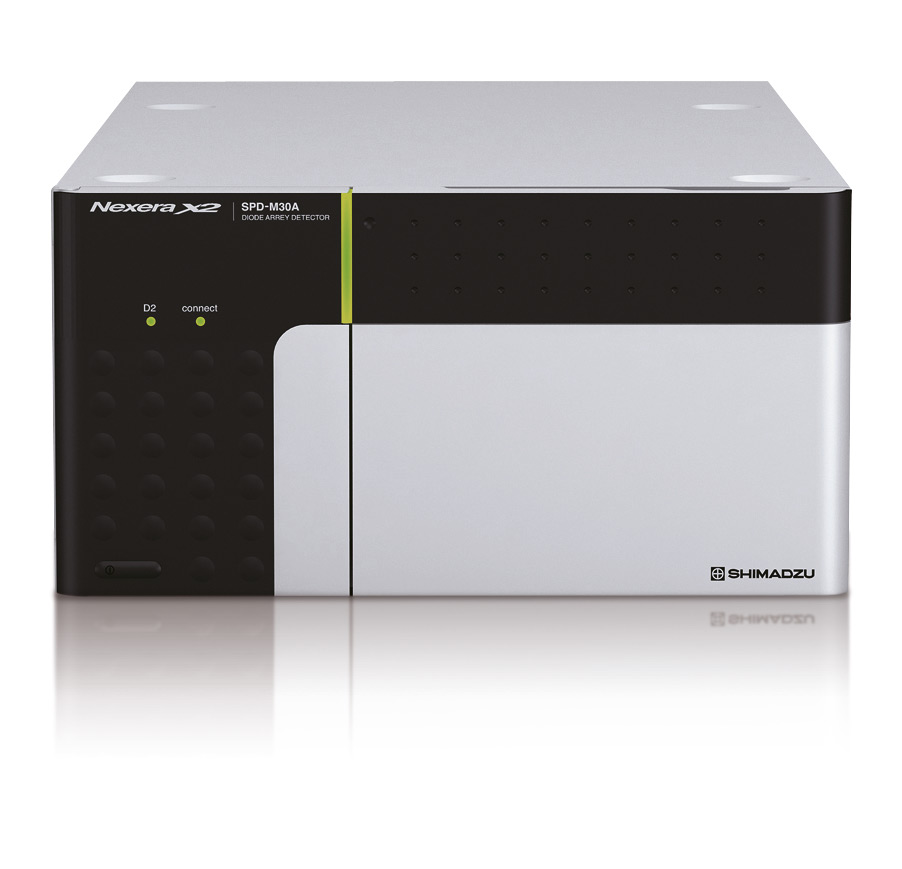 With the introduction of the SPD-M30A detector, the Nexera UHPLC series adds a new member to the family. Just like Shimadzu’s photodiode detectors of the past (Figure 1), the new detector (Figure 2) is also one step ahead of the ever-increasing demands of modern high-performance liquid chromatography.

In the era of UHPLC where peak widths of less than one second are quite common, detectors must provide very fast data acquisition rates. At the same time, ultrafast separations should not suffer from loss of sensitivity.

In order to obtain informative data, the instruments must provide high spectral resolution. Combined with high sensitivity, high spectral resolution represents the optimum, and it is one of the strengths of the new SPD-M30A. The sophisticated optical unit, the state-of-the-art electronics and the flow cell are crucial components as well.

To meet today’s demands in UHPLC, the detector cells must have the smallest possible cell volume in combination with the longest possible optical path length (typically 1 cm for standard HPLC cells). The flow line and the shape of the cell must support the fastest possible fluid exchange in order to minimize dispersion. The combination of optical unit and flow cell should be designed in such a way that refractive index effects become negligible.

The benefits of performance

The optical unit was optimized for the use of capillary flow cells. This involves the use of a 1,024-element CMOS photodiode-array. This combination allows high spectral resolution of 1 nm (Figure 3). In addition, the entire optical unit is thermostatted. In this way, the instrument is ready for operation faster and is significantly less sensitive to ambient temperature fluctuations (see figures 4 and 5). 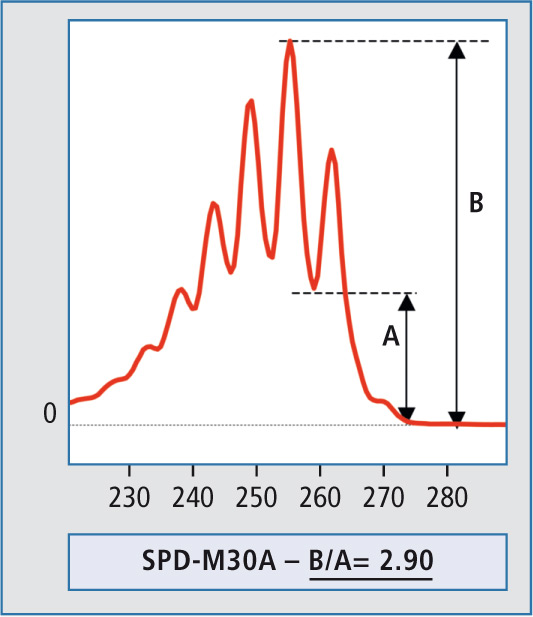 Figure 3: Benzene spectrum obtained with the SPD-M30A. Looking at the ratio between maximum B and minimum A, it can be concluded that the spectral resolution of the detector is excellent. 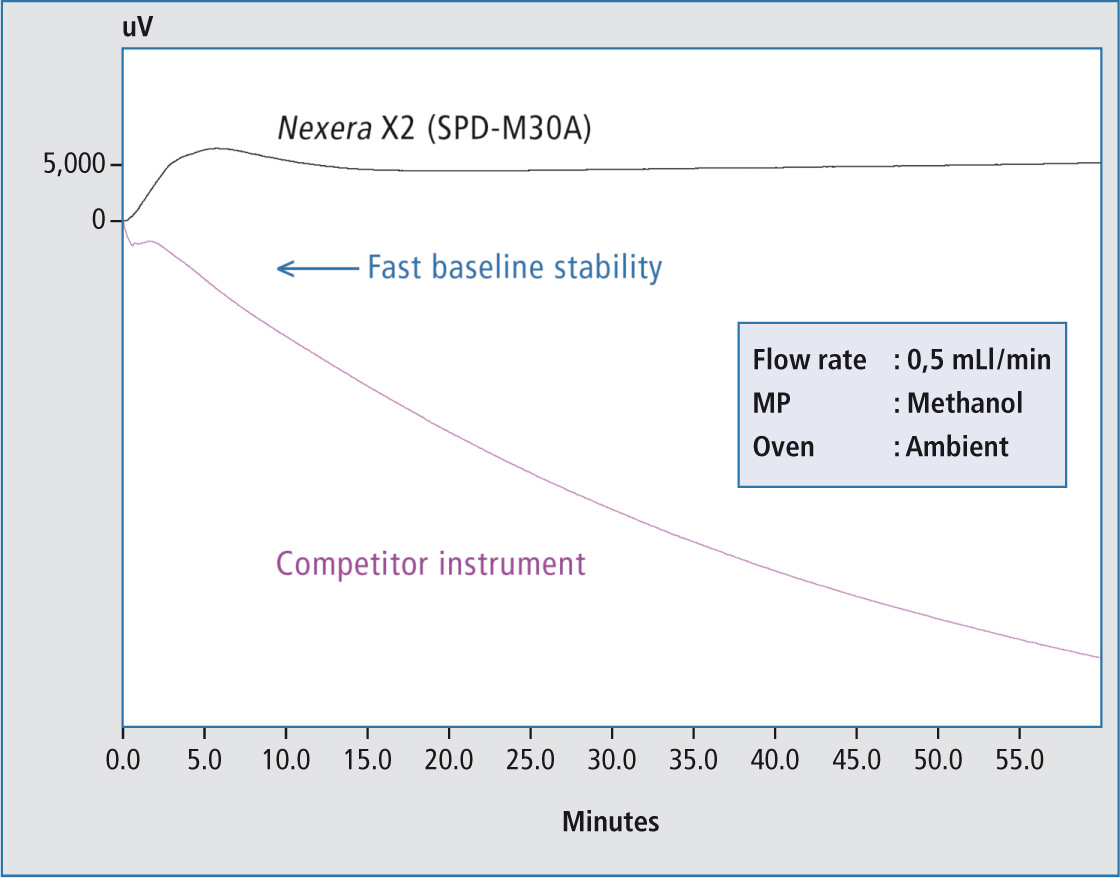 Figure 4: The new SPD-M30A obtains a stable baseline 20 minutes after switching on the instrument, whereas a competitor instrument still exhibits a noticeable baseline drift even after one hour

To reduce noise even further, a special high-performance Deuterium lamp is used.

The key role of the capillary flow cell

The new capillary flow cell (Figure 6) has an optical path length of 1 cm, which is standard for most analytical cells. Exceptional however, is the cell volume of only 1 µL. Stray light and refractive index effects are reduced to a minimum due to the extremely well reflecting capillary and the use of advanced fiber optics technology. 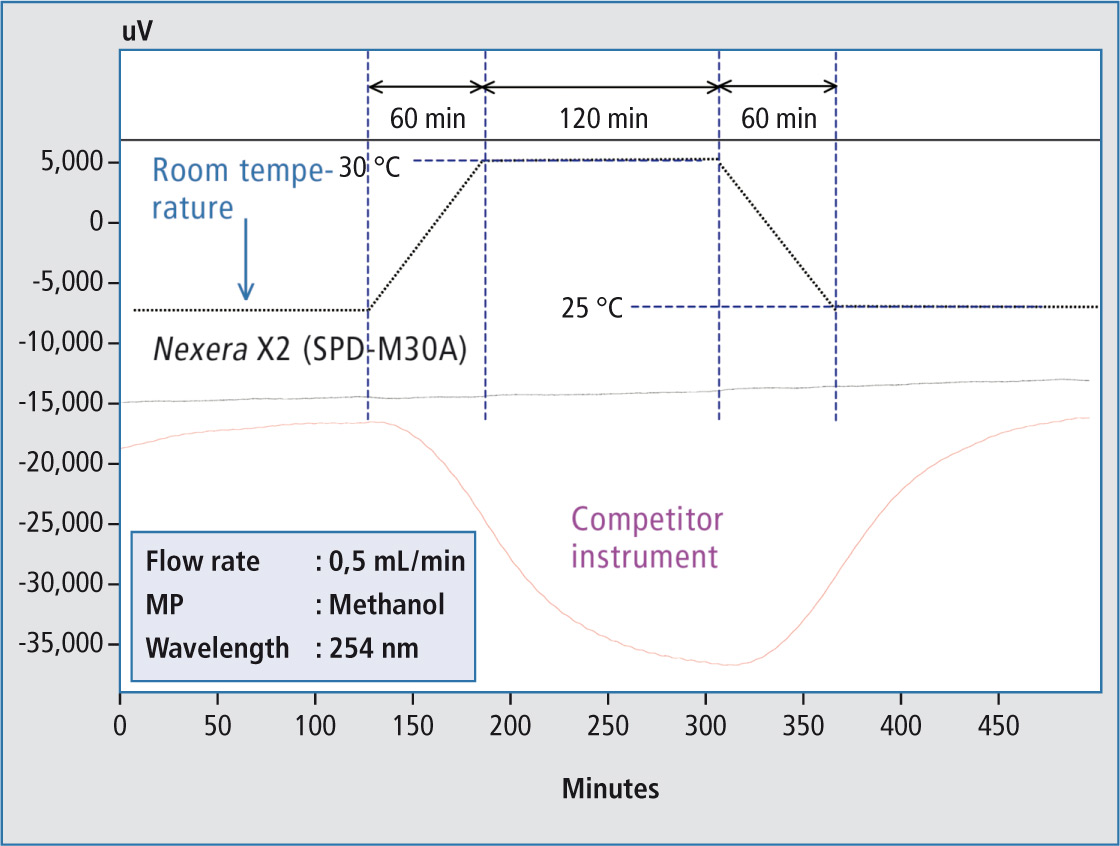 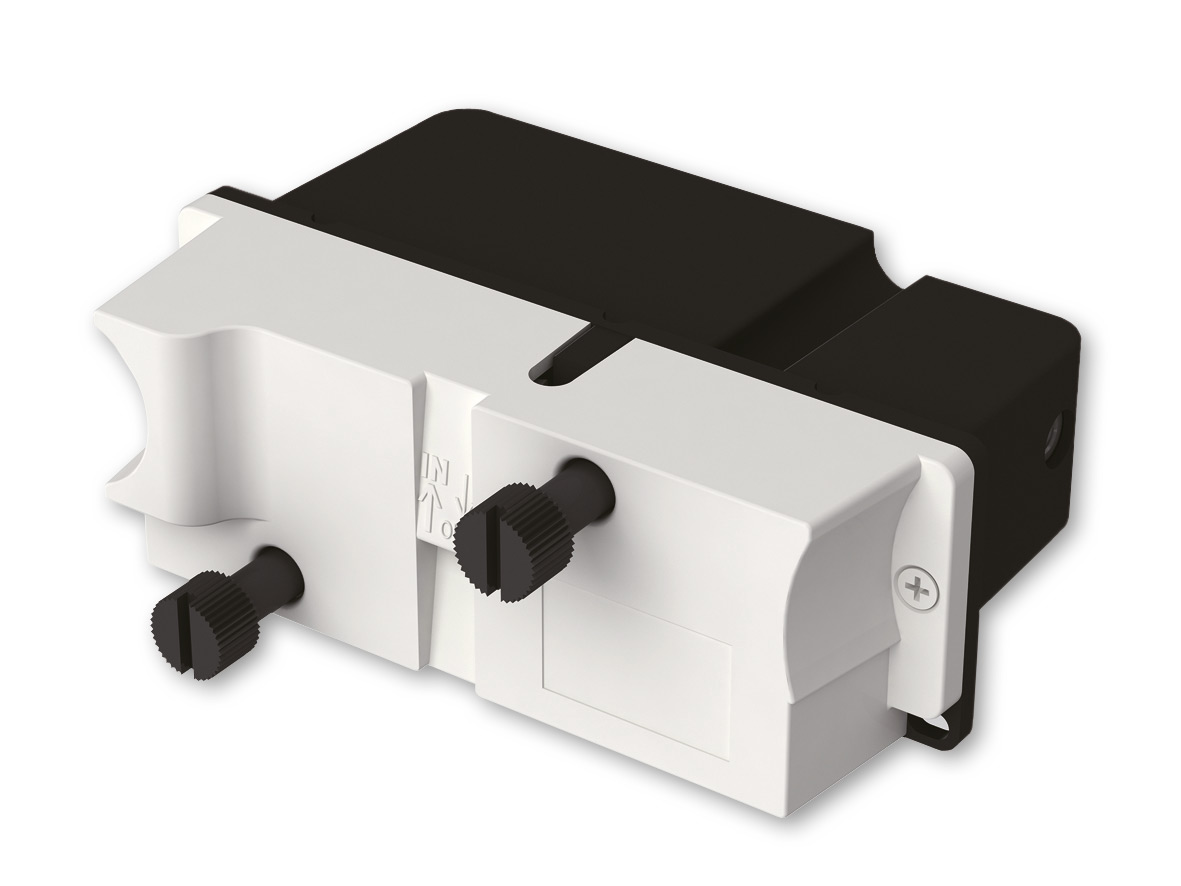 A cell with this geometry is the optimal solution for use in the semi-micro range in UHPLC as well as in conventional HPLC. Figure 7 shows a chromatogram overlay of the predecessor model, SPD-M20A with the 2.5 µL UFLC cell and the SPD-M30A with the standard cell. There is a clear difference between the signal intensities due to the different optical path lengths. It is obvious as well, that higher plate numbers and improved resolution can be achieved through the low dispersion and the smaller cell volume in the SPD-M30A.

Figure 7: Comparison between the SPD-M20A containing the UFLC cell (red) and the SPD-M30A equipped with the standard capillary cell (black) under equal chromatographic conditions 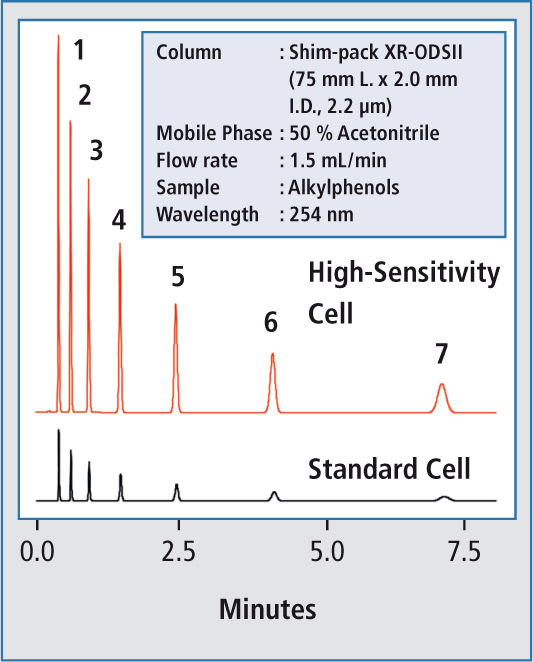 Figure 8: Comparison between the SPD-M30A standard capillary cell and the optional HS cell

To meet the requirements in a regulated environment (for instance GLP and GMP), the cells of the SPD-M30A feature an ID function which ensures traceability to the cell employed based on the data files.

In accordance with requirements, the new SPD-M30A allows selection of various data acquisition rates of up to 200 Hz, which yields a distinct peak profile with peak widths of 0.1 sec. Figure 9 shows a peak which has been recorded with a base width of approx. two seconds at different data acquisition rates. It can clearly be seen that a data acquisition rate even of 100 Hz, in comparison with 40 Hz, allows a more accurate peak representation. 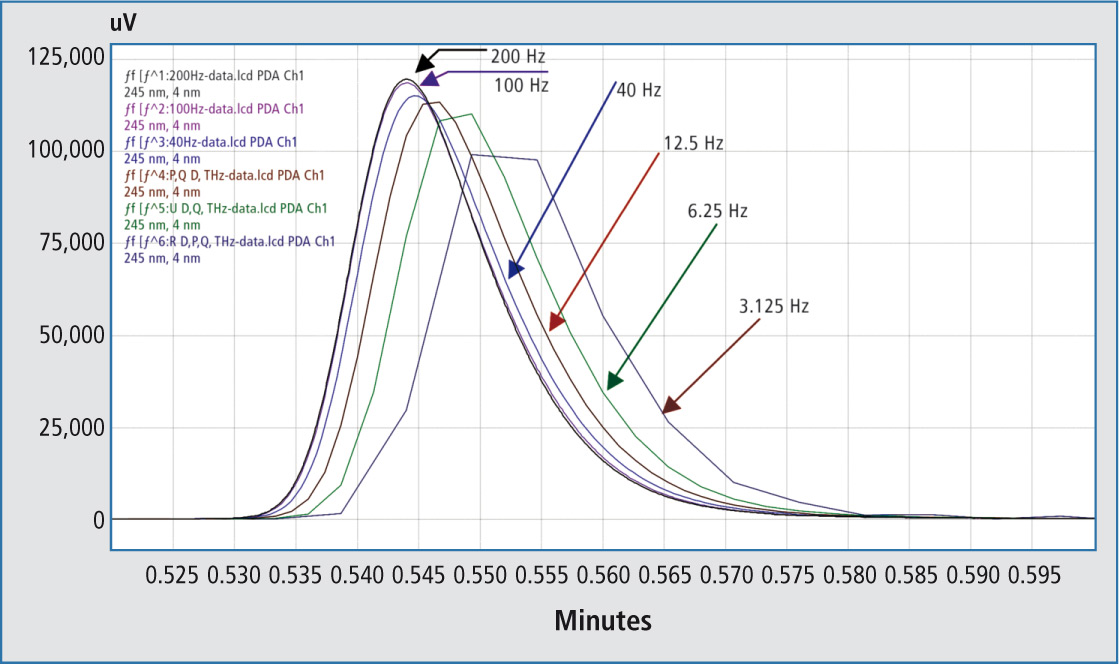 It is also evident that at a peak width at baseline of approx. two seconds, the 200 Hz data acquisition rate does not offer any significant improvement.

Software extends field of use

Additional features in the new LabSolution software extend the field of use in photodiode-array detection:

With the ‘intelligent Peak Deconvolution Analysis’ function (i-PDeA), it is possible to easily quantify overlapping peaks or peaks containing impurities and different spectra, using the first derivative of the spectrum
The ‘intelligent Dynamic Range extension Calculator’ (i-DReC) function enables quantification of highly concentrated samples whose signals exceed the linear detection range by many times. For quantification without extrapolation, the standard calibration curve created within the linear range of the detector is used. In practice, the linear range of the detector is extended over several orders of magnitude without additional hardware.

Both functions are highly user-friendly and, in addition to allowing manual parameter setting, automatic parameter selection is also possible.

The new SPD-M30A records high-resolution data with the highest quality. In terms of sensitivity and speed the new i-PDeA and i-DReC software features significantly extend the field of use.