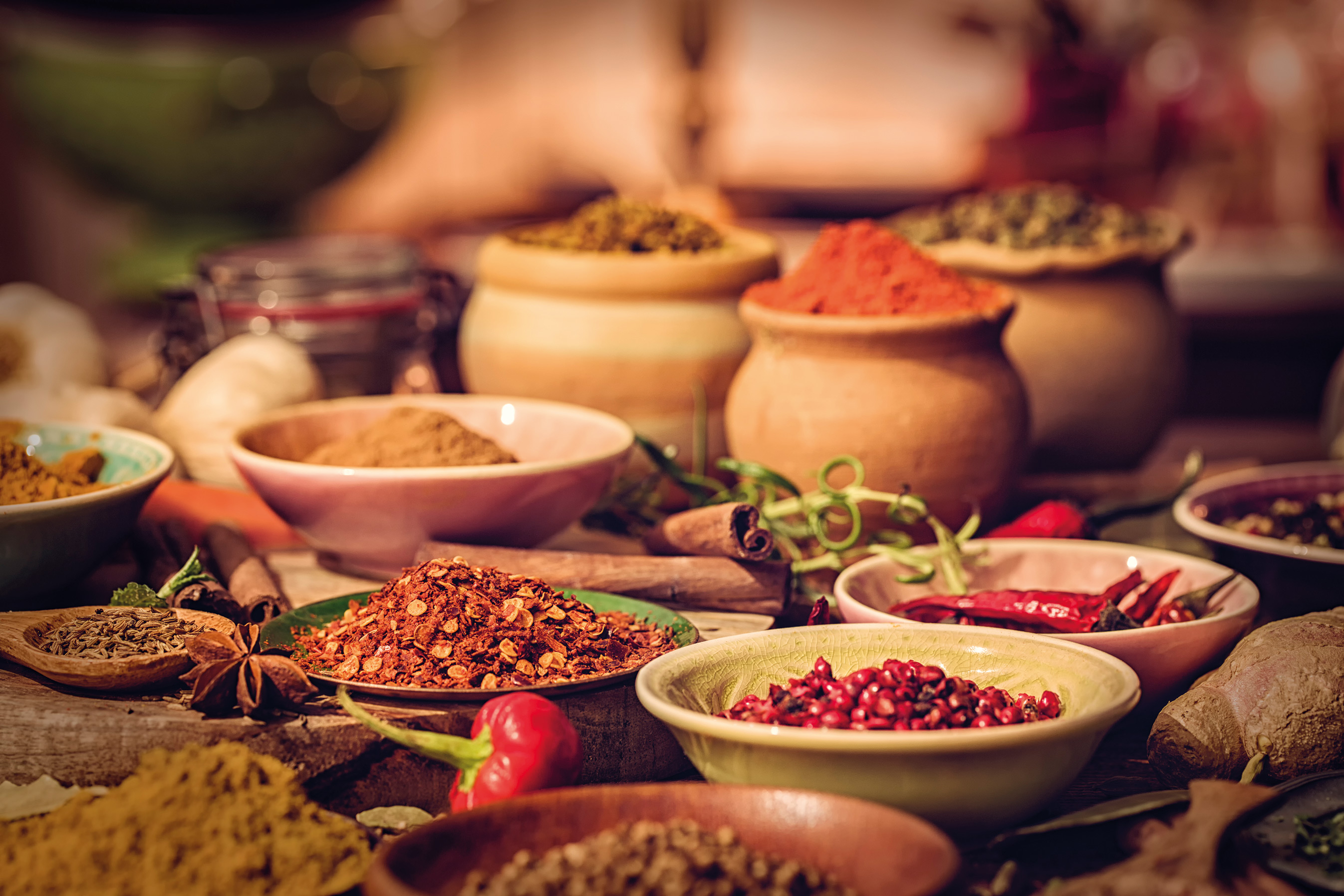 Matrix effect is a well-known phenomenon in the pesticide residue analysis field. The ion suppression generated in the mass spectrometer ion source can lead to errors in the quantification of analytes. Other problems regarding detection difficulties and loss of precision and accuracy in the analytical method applied are also associated with these matrix effects.

Supercritical fluid chromatography coupled to mass spectrometry (SFC-MS/MS) is a technology developed in the 1960s and has been continuously updated until it has reached the nowadays robust new generation of systems. The behavior of matrix effects in SFC-MS/MS is different in comparison with reverse-phase liquid chromatography coupled to mass spectrometry (LC-MS/MS). To understand this, it is necessary to focus on the different chroma­tographic and ionization conditions of both techniques.

Differences between SFC and reversed-phase LC

The supercritical fluid chromato­graphy system employed during this study is described in Figure 1. The mobile phase presents low viscosity and high diffusivity as supercritical carbon dioxide (scCO2) is used. Short run times are customary in SFC-MS/MS; the properties of scCO2 allow the application of high flow rates (higher than 1 mL/min) without reaching the pressure limit, and performing of efficient analyte separations.

In reverse-phase LC, the compounds elute in decreasing order of polarity, but in SFC, even though polarity influences their solubility in scCO2, it does not play the primary role in the elution order. Therefore, no sole criterion for the elution order of the analytes in this technique is present, and polarity cannot be used as a reference.

What is clear is that ionization using electrospray ion source (ESI) in SFC-ESI-MS/MS is more efficient when compared with LC-ESI-MS/MS. Temperature and pressure conditions are controlled by a backpressure regulator (BPR) in supercritical fluid chromatography. However, when the flow with the analytes leaves the BPR, atmospheric pressure is reached. Carbon dioxide then returns to the gas state, and only the small portion of methanol inside the mobile phase reaches the ion source. The advantage of this low flow entering the sources lies in the increment of sampling efficiency due to the production of smaller charged droplets, resulting in increased ionization rates.

Furthermore, the solvent reaching the source plays an essential role in ionization improvement. Methanol together with supercritical carbon dioxide is usually the co-solvent employed. Liquid chromatography customarily uses a mixture of water and an organic solvent. Comparing methanol with water, ionization benefits can be observed as methanol provides a lower density and surface tension that increases solvent evaporation rate. To summarize, the process for the analytes of interest to reach the gas phase is shortened and ionization efficiency is in­creased accordingly.

The competition in ESI for the available charges decreases the ionization efficiency in the interface. The co-eluting compounds also increase the surface tension and viscosity of the microdroplets. As explained above, this reduces the ability of the analytes to reach the gas phase. Therefore, the ionization improvement of the SFC-MS/MS and the possibility to inject a lower amount of sample due to the high sensitivity results in a reduction of the matrix effect.

Matrix effects in fruit and vegetables

An evaluation of 164 pesticides was performed using SFC-MS/MS in three different matrices of fruit and vegetables. These matrices are representative of different compound compositions: Tomato (high water content matrix), orange (acidic matrix) and leek (high number of co-eluting compounds matrix). The possibility of suppression caused by the matrix depends on the nature of the compounds present; vegetable matrices such as leek contain a large number of compounds in the matrix and are more likely to cause ion suppression.

QuEChERS extracts from the three matrices studied were spiked with 164 pesticides as follows: 100 µL of each blank extract was evaporated under a gentle stream of nitrogen and reconstituted with 100 µL of acetonitrile containing the mixture of analyzed pesticides at 5, 10, 20, 50, 100 and 500 µg/kg. 400 µL of ultrapure water was then added to dilute the extract before injection. The samples injected therefore contained 0.2 g of matrix per 1 mL of extract, and their pesticide concentrations were 1, 2, 4, 20 and 100 µg/kg. Hence, as 2 µL is the injection volume used, 0.4 mg of the sample was introduced in the system.

The zero matrix effect can be considered when calibration curves based on solvent and matrix have the same slope. This situation is more likely to be found in matrices like tomato, where a low number of compounds coelute with the analytes. The complexity of the matrix components in matrices like orange or leek is much higher in comparison with high-water content matrices like tomato. However, using supercritical fluid chromatography, there is a slight difference between the slopes in the different matrices, as can be observed for the examples presented in figure 2. 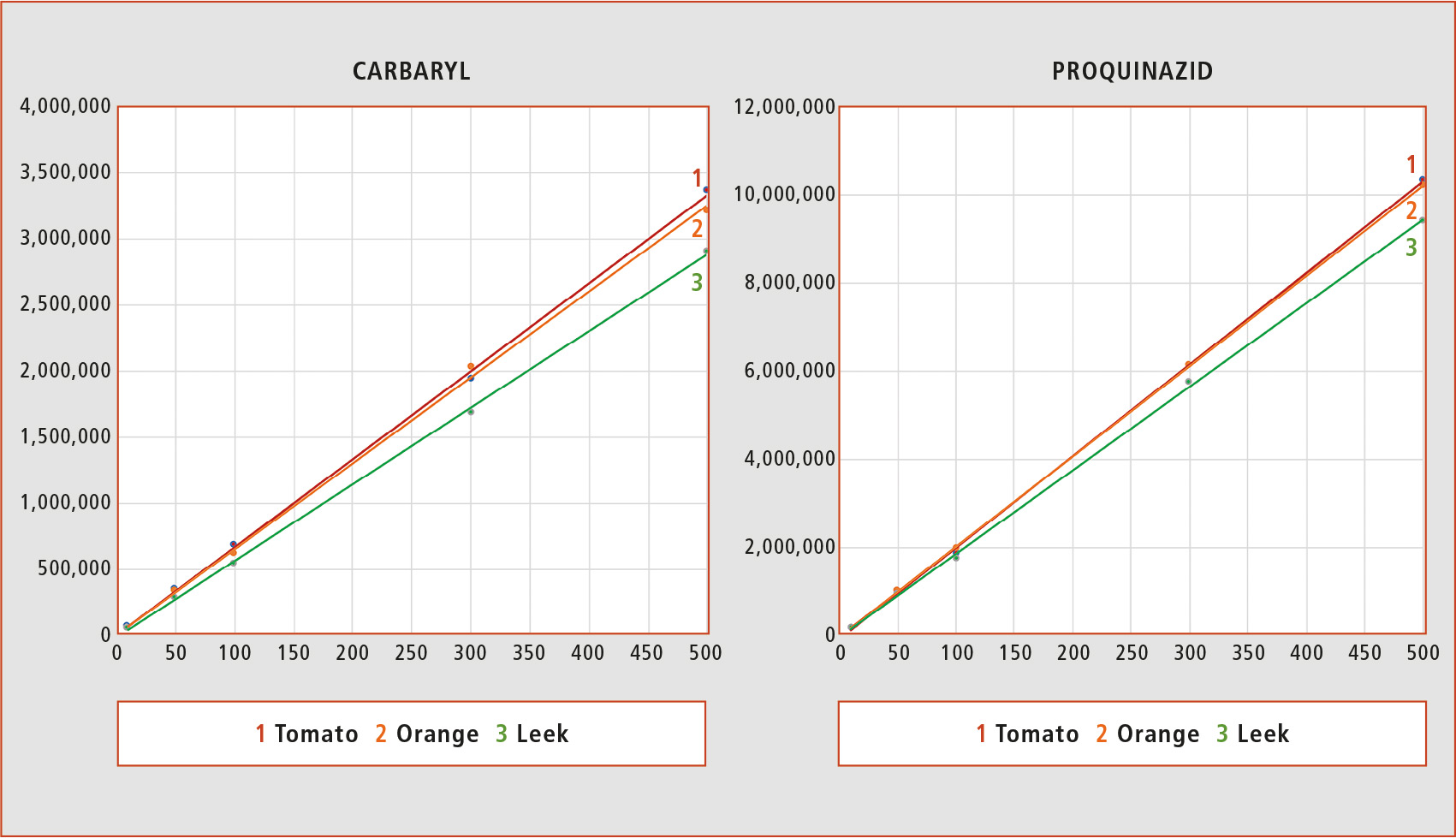 Figure 2: Matrix-matched calibration curves of Carbaryl and Proquinazid in tomato, orange and leek

On the other hand, the percentage of compounds with signal suppression between 20 and 50 % was 1 % for tomato, 12 % for orange and 35 % for leek. Significant suppression was not found in tomato, and only 1 % of the compounds in orange and 3 % in leek had an ion suppression higher than 50 %. These results with SFC-MS/MS show that the ionization benefits bring a reduction of matrix effect even in very complex vegetable matrices such as leek.

This study was also applied to dried spices. These are complex matrices that contain large amounts of essential oils, plant nutrients and secondary metabolites such as flavonoids, terpenes and alkaloids.

Analysis of pesticide residues in spices is complex due to the high ion suppression suffered in the ion source. The spices evaluated (black pepper and cayenne) can be considered as representative of matrix difficulties. The same concentration levels were used for the calibration curves in each matrix, and 0.1 mg was the total amount of sample injected. 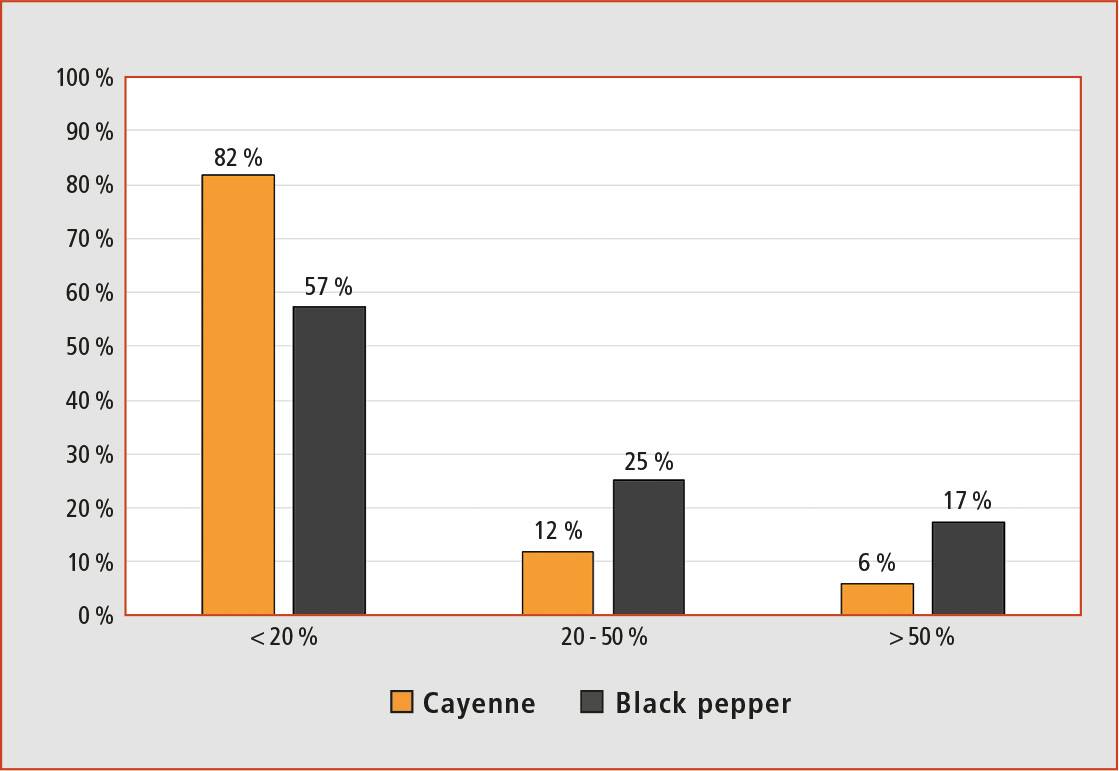 Figure 3: Matrix effect (%) of the 162 pesticides studied in cayenne and black pepper matrix

As can be observed in Figure 3, 132 (corresponding to 81 %) of the 162 pesticides studied showed weak matrix effects in cayenne and 91 (56 %) in black pepper. On the other hand strong matrix effect was only found in 10 (6 %) pesticides in cayenne and 27 (17 %) in black pepper. These results represent an improvement over most of the published literature using LC-MS/MS to analyze pesticides in spices.

The highly efficient ionization in SFC-ESI-MS/MS allows enlargement of the scope to compounds typically analyzed by gas chromatography coupled to mass spectrometry (GC-MS/MS), as is the case of pyrethroids. These synthetic chemical pesticides present difficulties in analysis by reverse-phase LC-MS/MS. In general terms, LC usually provides lower sensitivity, and most of the analytical methods described for the analysis of these compounds use gas chromatography (GC).

After optimization of these compounds with supercritical fluid chromatography, a study of the matrix effect was performed. The extracts of six different matrices (tomato, zucchini, pear, orange, onion and tea) were used to prepare the matrix-matched calibration curves. In all cases, in SFC, the medium and strong matrix effects correspond to signal suppression.

With GC, the situation was the opposite: all pyrethroids with a matrix effect higher than 20 % showed signal enhancement with one exception, tetramethrin, which presented a signal suppression of 38 % in tea. As detailed in Table 1, similar matrix effects were obtained by both techniques. Looking at the results of the orange matrix, no matrix effect was obtained by SFC; however, this matrix produced a remarkable enhancement of the signal for all of the pyrethroids in gas chromatography, with the exception of fenvalerate.

Table 1: Matrix effect (%) of the 14 pyrethroids in the matrices studied

The low matrix effect in complex matrices like orange, leek or dried spices demonstrates that SFC-ESI-MS/MS can facilitate the analysis of pesticide residues in comparison with LC-MS/MS. The increased ionization efficiency, type of solvent applied and low amount of sample injected provide improved accuracy and precision of the quantitative mea­surements.