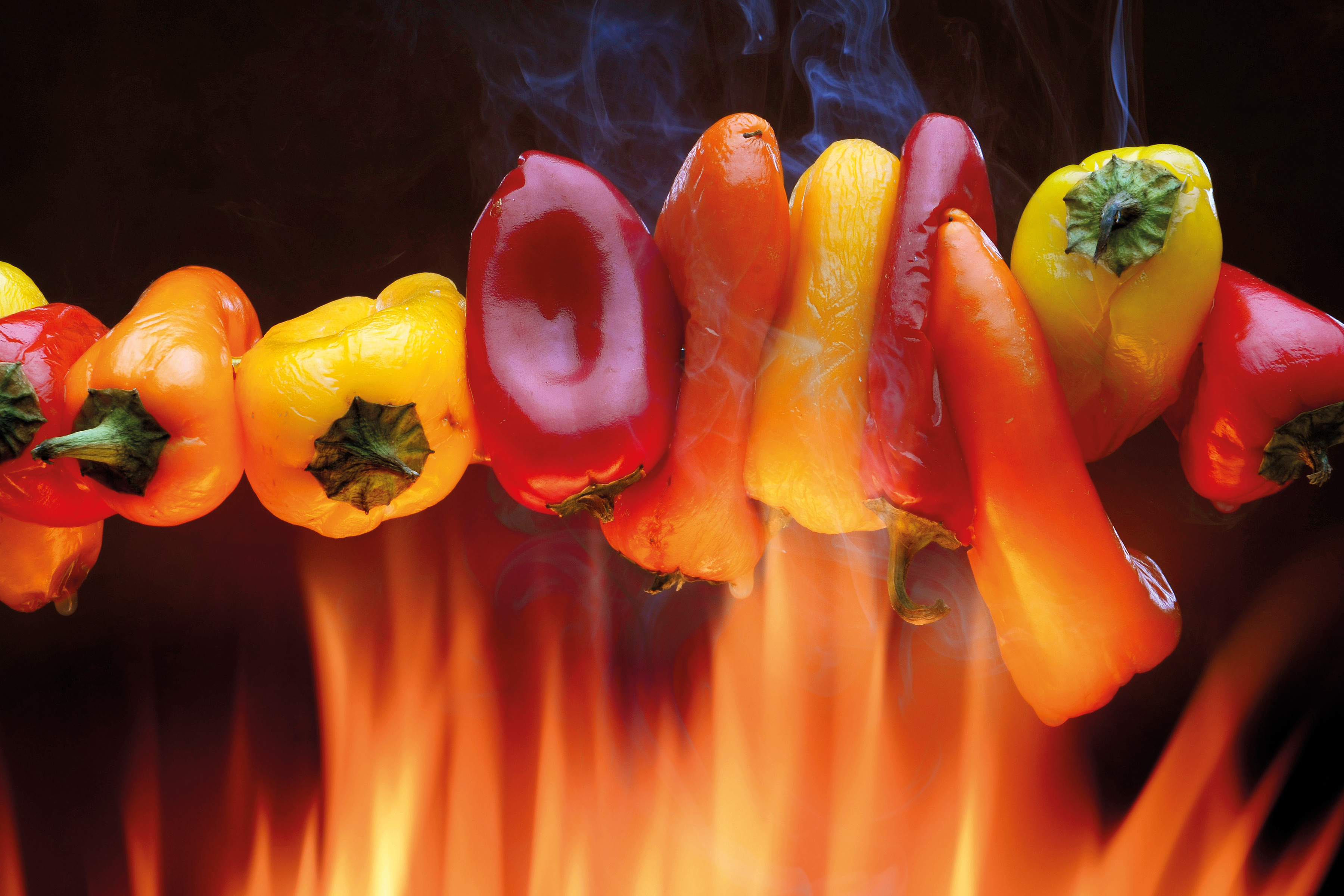 The taste of potato chips or grilled vegetables has to do with pyrazines and methional, two chemical compounds re­sponsible for a roasty flavor in food. Both are connected to the heat-initiated Maillard reaction of reducing sugars and amino acids, adding taste and smell to vegetables and meats.

The aim of these current investigations was to identify co-eluting potent odor-active compounds in a natural flavor extract. This was achieved by GC-O, a gas chromatographic olfactometric method in combination with two-dimensional GC-MS, gas chromatography and mass spectrometry. The GC-O method is the perfect choice for analysis of individual odor relevant substances in complex blends. It enables recognition of substances which other analytical methods are unable to identify due to lower detection limits.

A GC-O/GC-O/MS system (figure 1) was used to transfer this elution range from the first column (DB-FFAP) to a second column (DB-5) by means of a heart-cut Deans Switch system. The compounds eluting from the second column were also evaluated by means of simultaneous GC-O and GC-MS. The DB-FFAP column is of high polarity and particularly suitable for the analysis of aroma compounds. The DB-5 is an almost non-polar phase and separates, what the FFAP cannot separate. 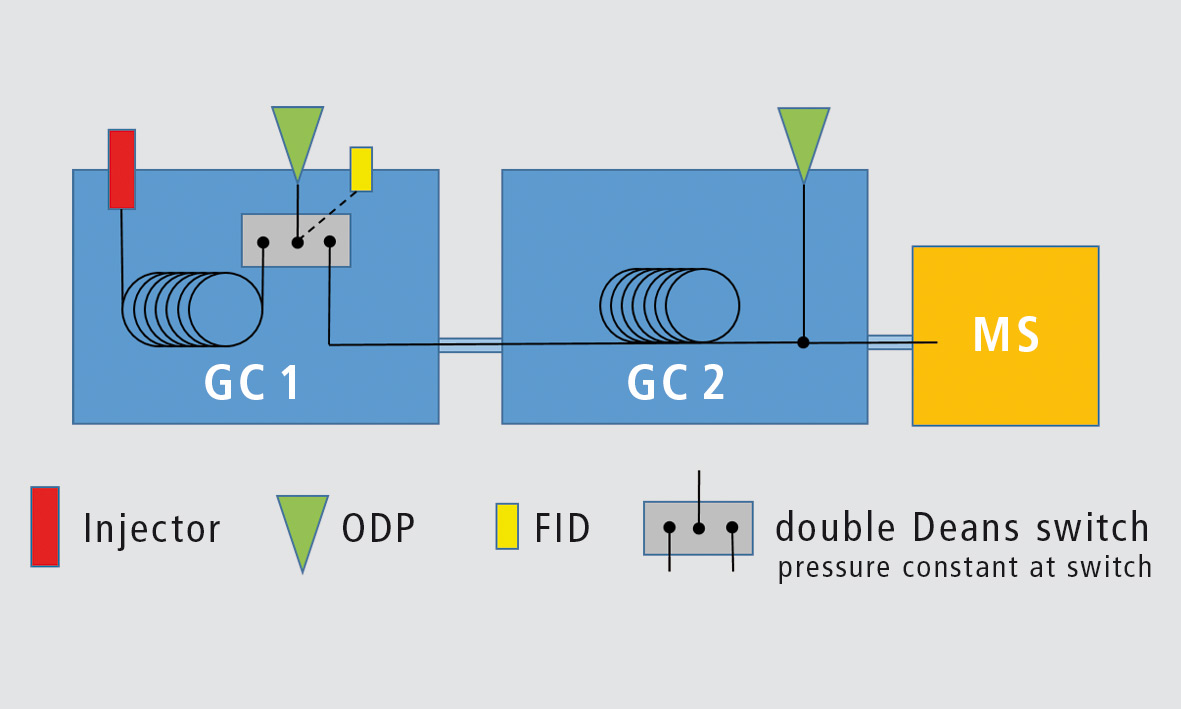 The principal strength of this strategy is best demonstrated on the example of a coffee extract. Figure 2 shows in the upper section a total chromatogram of a coffee extract and in the lower section compounds eluting in a narrow time window of 30 seconds. The peaks in this window are badly shaped and MS library searches fail. This area was now transferred to the second column and analyzed using MS. Figure 3 shows a very good separation of compound eluting in this time slot with perfect conditions for identification and GC-O anal­ysis on the second sniffing port. 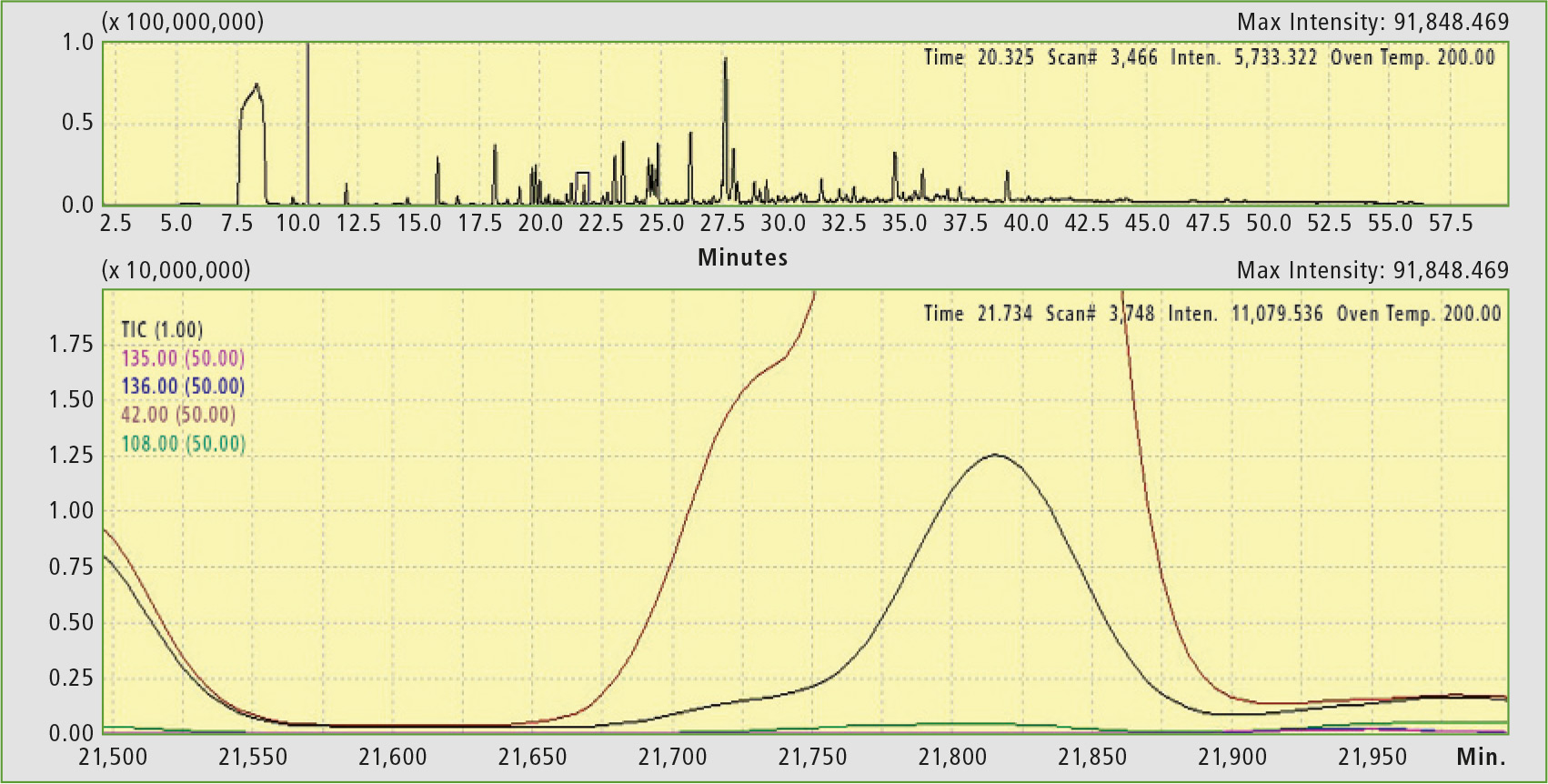 Figure 2: Upper section: full chromatogram of coffee aroma; lower section: peaks eluting in a time window of 30 seconds. Separation is poor and MS response does not give meaningful library hits. 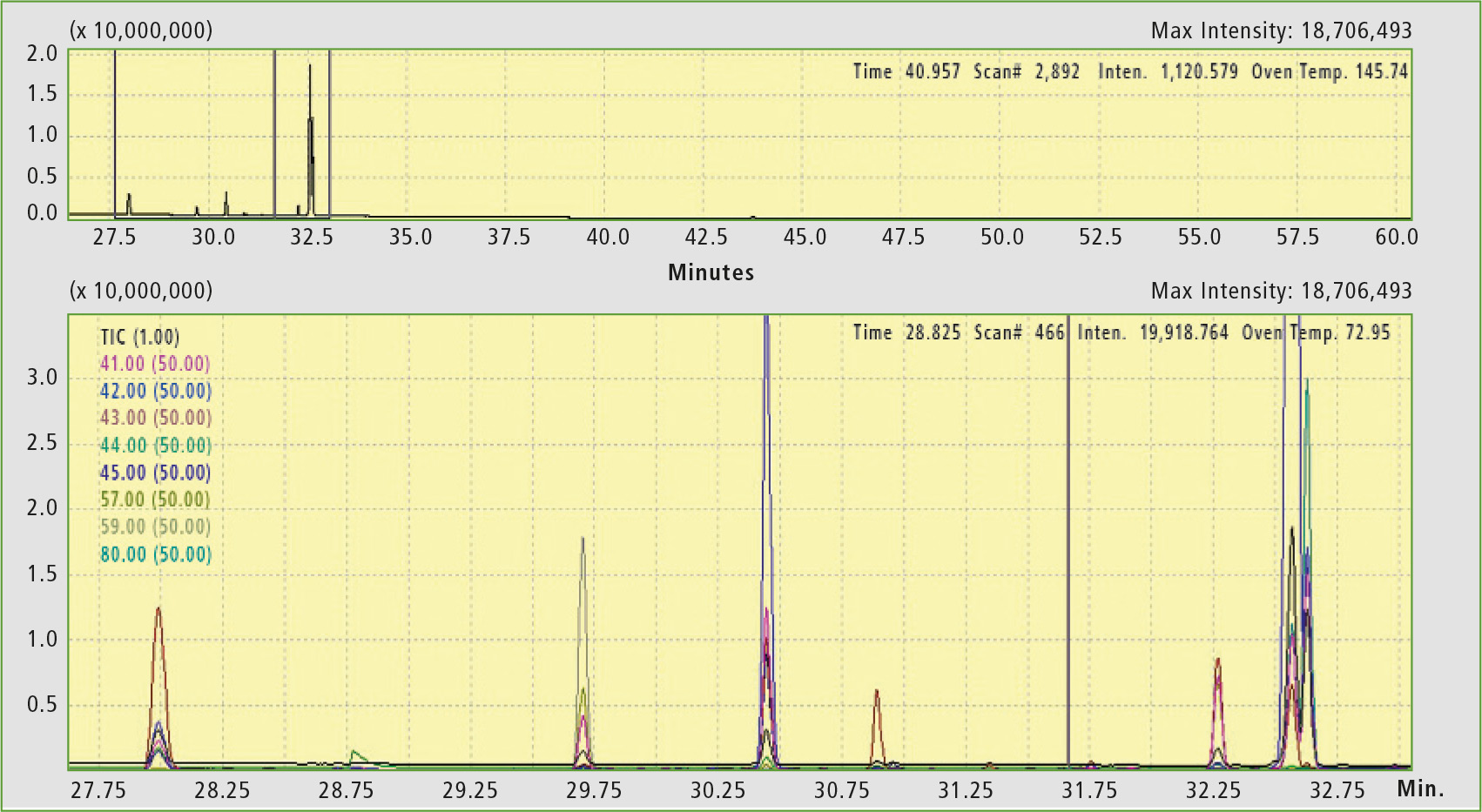 Sniffing analysis was executed on FlavoLogic sniffing ports which can be mounted and heated by an additional Shimadzu injector. These sniffing ports have an optimized geometry for most sensitive detection and no tailing of odors from re-condensing aroma compounds (figure 4). 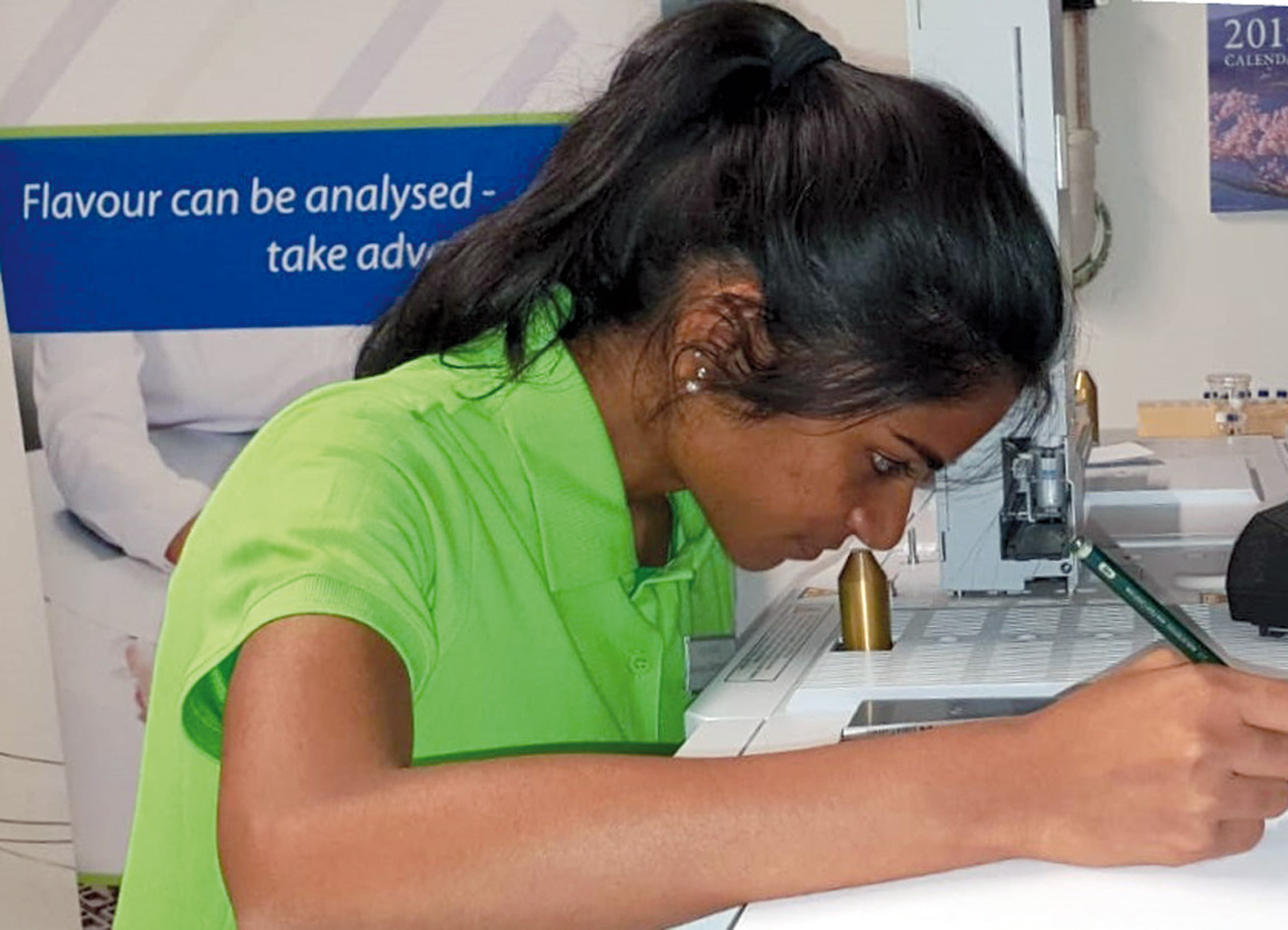 A natural flavor extract separated on a DB-FFAP column showed interesting sniffing impressions in a small time window around 23.1 and 23.3 min (figure 5). The odors were perceived as roasted, earthy and cooked potato-like. Reference data revealed that methional and a couple of pyrazines as potential aroma compounds elute in this area. However, one-dimensional GC-MS data gave no reliable MS signals. Also, it was assumed that the peak in the area of interest is the result of a difficult co-elution situation, and that potentially more than one pyrazine is coeluting with methional. 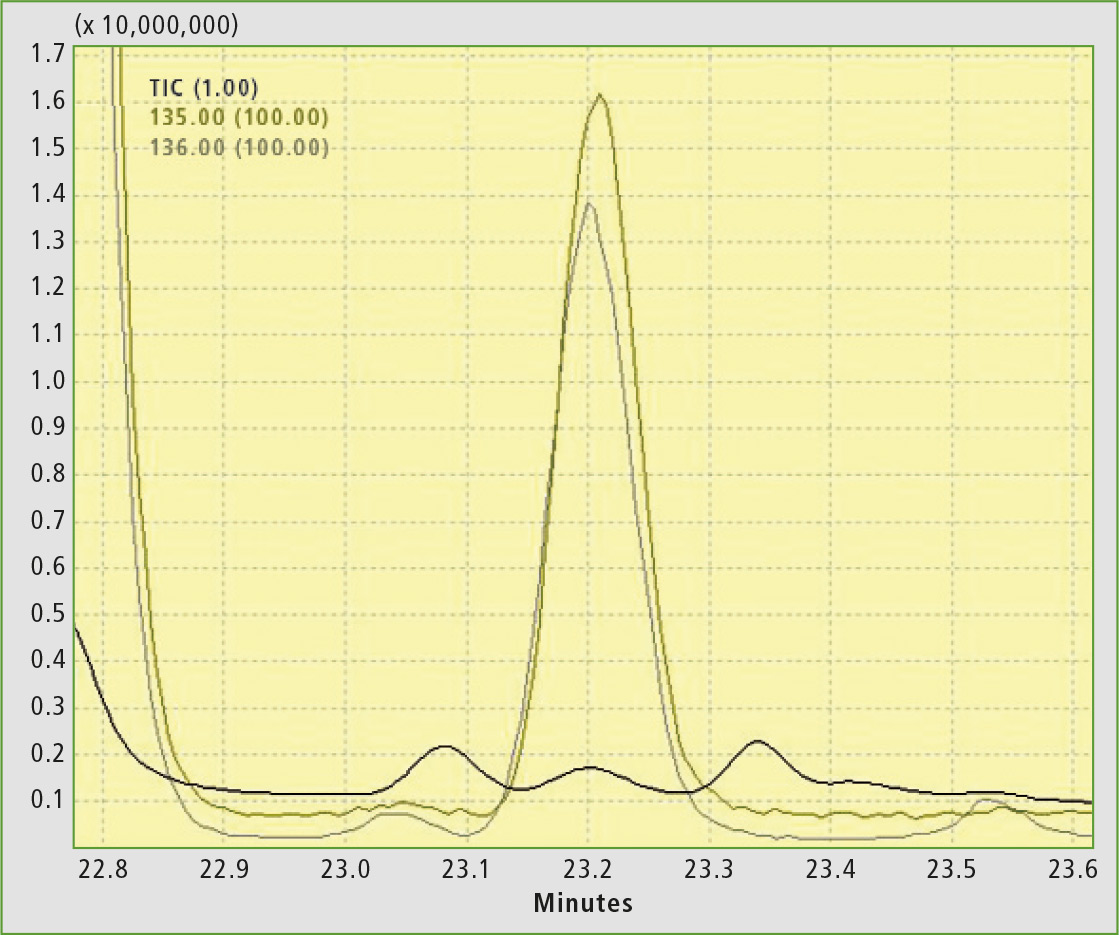 Figure 5: Asymmetrical shaped peak after separation on the first column

After transfer of these peaks into the second column, three closely eluting peaks were detected at a retention time range from 34.40 – 34.65 min on DB-5, all three of them exhibiting roasted, pyrazine-like odor notes when sniffed at the sniffing port (figure 6). Evaluation of mass spectra and comparison with reference compounds enabled the identification of peak 1 (34.45 min) as 3-ethyl-2,5-dimethylpyrazine, of peak 2 (34.52 min) as 2,6-diethylpyrazine and of peak 3 (34.60 min) as 2,5-diethylpyrazine.

In addition, a potato-like smelling peak was detected at 29.875 min and confirmed by MS to be methi­onal (figure 7).

Figure 7: Identification of methional after heart-cut and separation on second column

The results show that GC-O/GC-O/MS is a perfect method for identification of co-eluting potent odor-active compounds in natural flavor extracts due to their very good separation. With a heart-cut Deans Switch system, evaluation of the mass spectra and comparison with reference compounds enabled precise identification of definite chemical compounds.