Citrus fragrances are highly appreciated in cosmetics as they provide a fresh and invigorating odor. Coumarins (C), furocoumarins (FC), also called psoralens, and polymethoxy­flavones (PMF) (figure 1), commonly named oxygen heterocyclic compounds (OHC) are molecules naturally contained in citrus essence, widely used in the cosmetic industry. These compounds are part of many cosmetic products of both leave-on and rinse-off types. 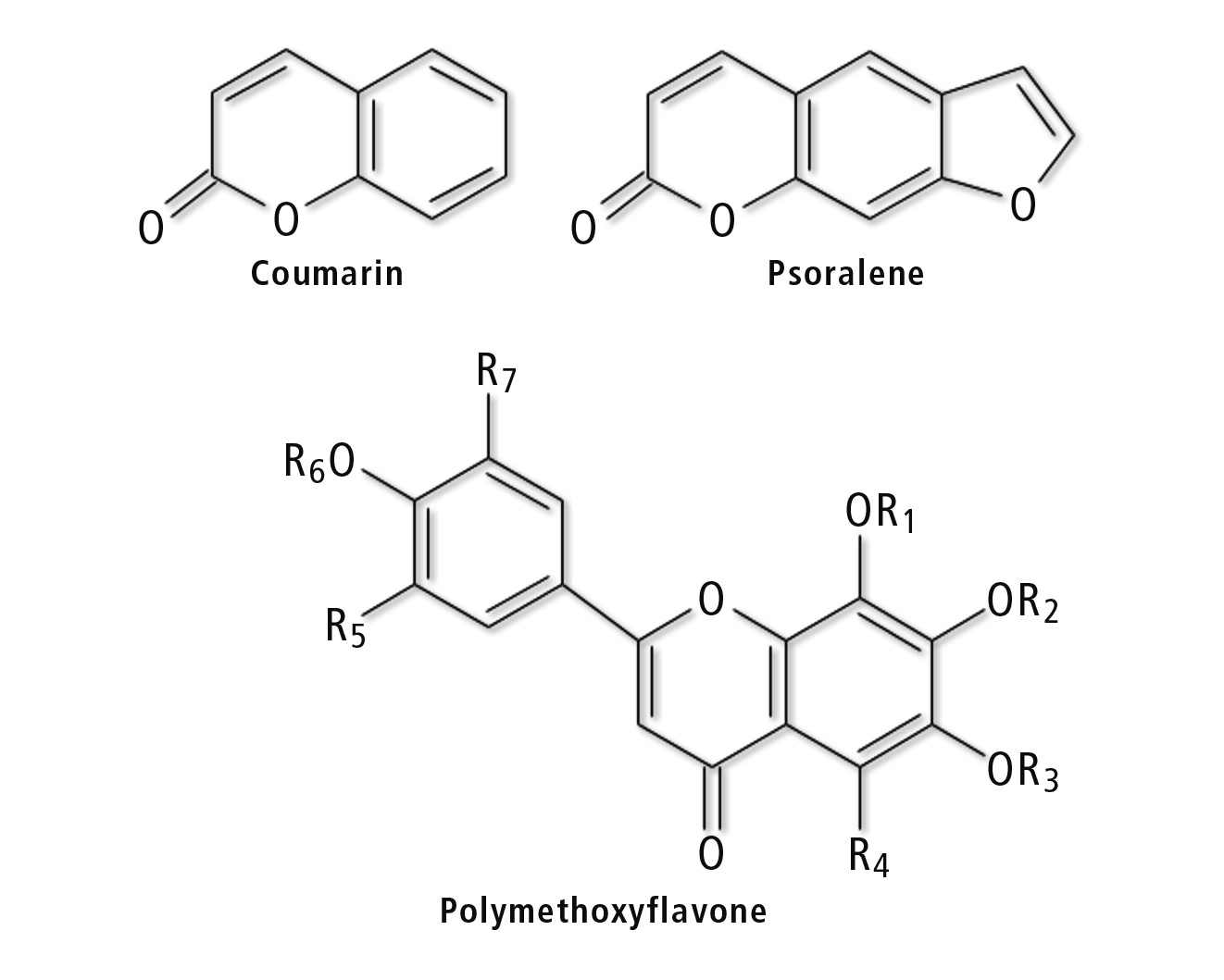 Furocoumarins, for example, are produced by a variety of plants such as bergamot, lemon, lime, and grapefruit. However, FCs acquire phototoxic effects after exposure to sunlight, so their maximum amount in cosmetics is restricted by the European Parliament through the Regulation (EC) No. 1223/2009 [1] and subject to opinions from several associations.

Although many advanced analytical strategies are available to characterize the non-volatile fractions of citrus oils in order to evaluate their authenticity and content of OHC, liquid chromatography (LC) coupled to photodiode array detector (PDA) is still the most widely used method by the majority of companies. The reasons why this technique is so widely employed are limited instrumentation costs and easy applicability, being suitable for routine quality control processes.

Correct determination of the non-volatile fraction of citrus oils is very important for the cosmetic industry, because it provides the quantitative information needed in order to combine essences without exceeding the official limits. In fact, citrus oils are often subjected to distillation or other processes to reduce the content of psoralens.

Despite wide knowledge about the applicability of the HPLC-PDA method for analysis of essences, a recent work by the International Fragrance Association (IFRA) focused on the limitations of PDA detection in the determination of FC in cold pressed citrus essential oils. The authors fixed the limit of quantification (LOQ) of 15 target FCs at 10 mg/L due to the low selectivity and sensitivity of PDA detection [2].

It must be admitted that PDA detection is less selective when compared to other detection approaches, but FCs have characteristic UV-Vis spectra and can be correctly identified and quantified using PDA by applying a proper strategy. The strategy reported here addresses the Linear Reten­tion Index (LRI) system as an extra criterion for identification in combination with the UV-Vis library; just as in GC where identification is based on spectral similarity (EI-MS) and the LRI filter.

The LRI parameter correlates retention time of the targets with a reference standard mixture. In this way, by the injection of a suit­able homologous series of standards, a specific LRI value will be attributed to the analytes [3]. Automatic identification by the software, based on spectra similarity, is subject to restriction of the LRI range, which guarantees unequivocal identification. If more candidates are suggested due to high match with the li­brary, the LRI provides the information based on retention behavior to restrict identification to just one candidate.

The chromatographic system of choice

One of the reasons why the LRI system has been limited in LC is the low reproducibility of older instrumentation, which was responsible for differences in the flow rate and elution gradient also between consecutive analyses. In this context, the UHPLC Nexera-i (figure 2) represents the chromatographic system of choice to apply this strategy. Thanks to its robustness, this instrument has all the characteristics needed to guarantee the stability of the LRI approach. Nexera-i also ensures automation of many routine analyses, exactly what is required by companies to achieve rapid and reliable results and proper data elaboration in quality control. 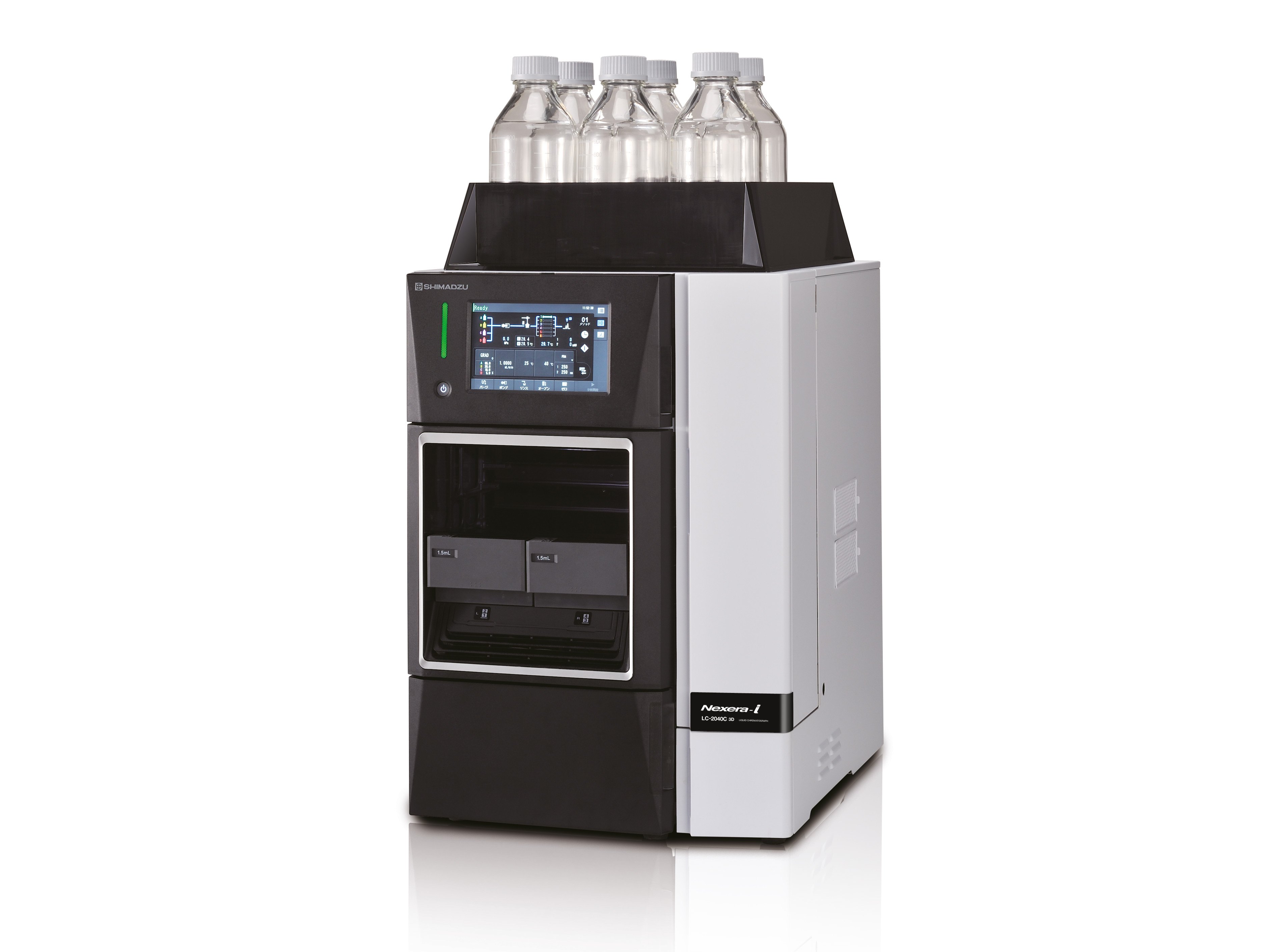 LRI, calibration curves and UV-Vis library were obtained by the analysis of 35 standard compounds, among them FC, C and PMF, under the HPLC-PDA conditions described in table 1 [4]. For calculation of LRI, the homologous series of alkyl aryl ketones (from C8 to C13) was selected based on its wide range of retention times, suitable to cover the chromatographic window of all targets, and for the capability of these molecules to absorb at 254 nm. 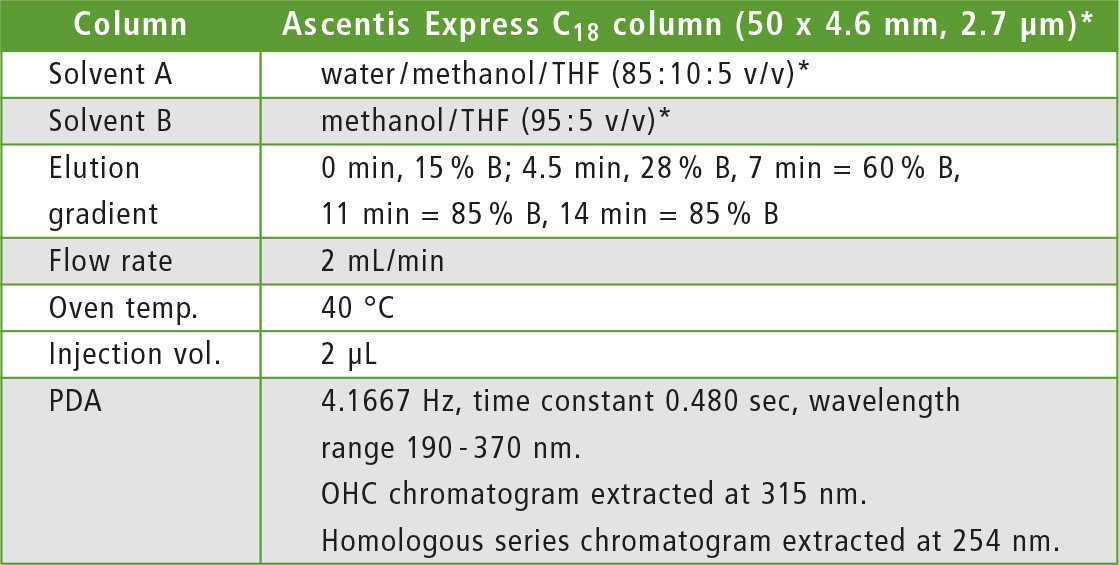 Calibration curves were generated in two ways: in pure solvent and in three different distilled essential oils used as blank samples to evaluate matrix effects and provide correct LOQ. The lowest linear points of the curves on blanks were considered the LOQ, being the lowest concentration not affected by the matrix.

Spectra of the targets, injected in pure solvent, were collected to create the library. In less than 10 min all standards were separated. Figure 3 shows the automatic calculation of LRI by LabSolutions software version 5.85, referring to the corresponding analysis of the alkyl aryl ketones. The manual equivalent operation to obtain LRI would use the equation developed by van den Dool and Kratz [4]. The applicability of the LRI system in LC was possible thanks to the robustness of the Nexera-i system. The high repeat­ability in terms of retention times is reported in figure 4. 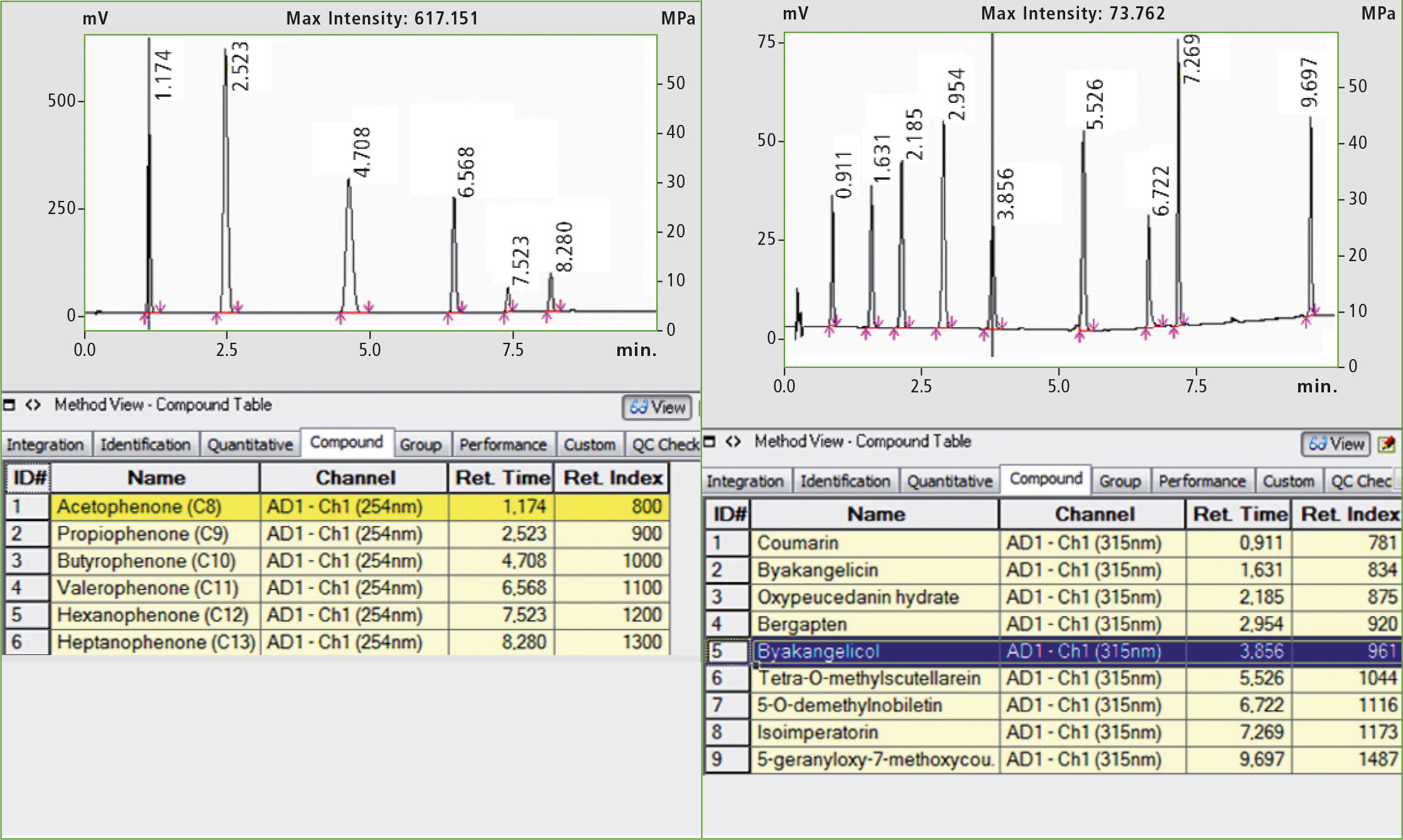 Figure 3: Automatic calculation of LRI by the LabSolutions software version 5.85 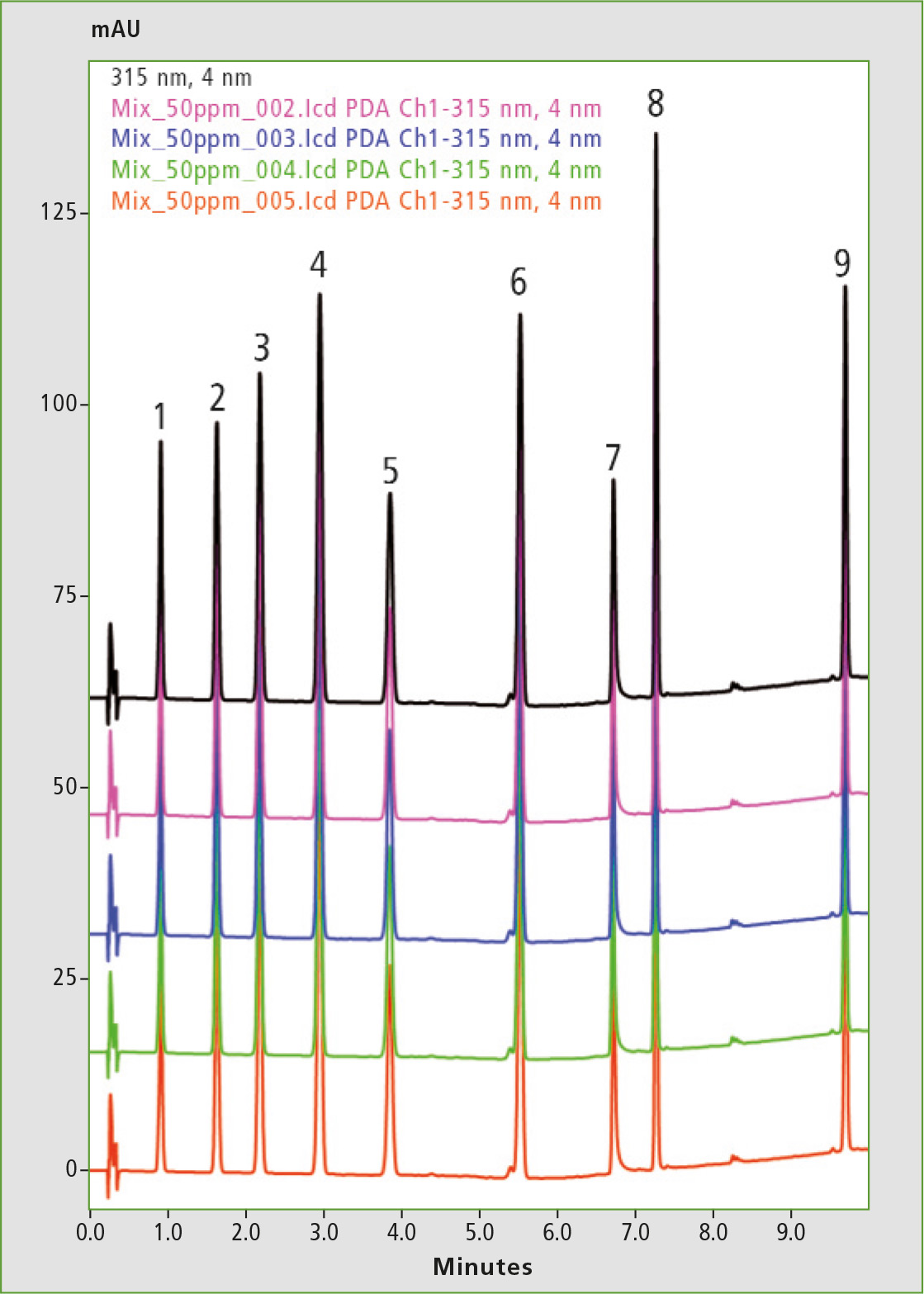 The UV-Vis library consists of 35 spectra, acquired in the range 190 – 370 nm, of 19 FC, 8 C and 7 PMF. In most cases the library was able to provide one candidate (figure 5), however in some cases LRI plays a key role in correct identification. This demonstrates how the combination of library and LRI overcomes the low selectivity of PDA detection, for discrimination of molecules with very similar spectra. 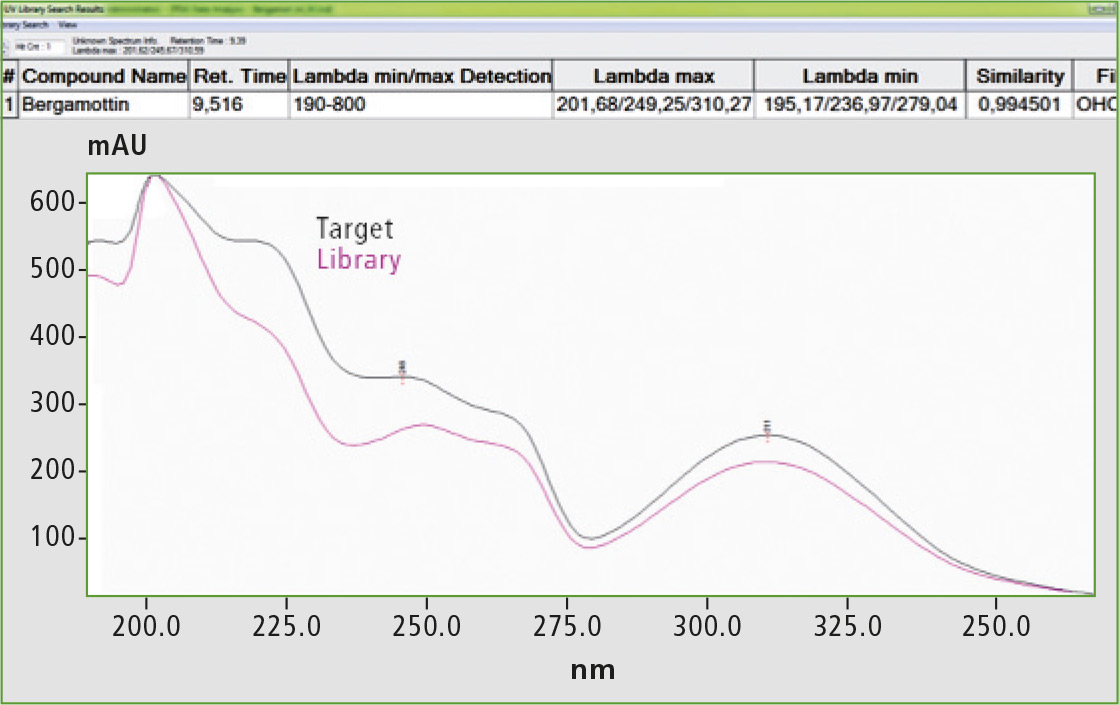 Figure 5: Identification of bergamottin through the UV-Vis library

The second focus of the study was to limit the interference of matrix effects in order to achieve correct quantitative determination of FC in cold pressed citrus essential oils. The calibration curves constructed on distilled citrus oils demonstrated how to avoid overestimation. LOQ, established as the lowest linear points of the curves, always resulted in much lower values than those suggested by IFRA. In particular, each molecule gave a specific LOQ de­pending on the distilled oil used as matrix and consequently on the presence of specific co-eluted interfering compounds. For FC, these limits were equal to 0.1 or 0.5 mg/L for almost all compounds, considering the distilled oils used (bergamot, lemon and mandarin).

The Nexera-i system confirms its suitability as the instrument of choice for this type of application. The robustness of the system makes the LRI approach perfectly applicable. Due to its ease of use, the Nexera-i system is suitable for QC of essential oils and many other samples.

The method was used to characterize OHC in different cold pressed citrus oils. Calibration curves on blanks provided accurate results: in fact, the amounts calculated were always lower than the data obtained with calibration curves in pure solvent.

The application of LRI in LC was the main challenge of this research and showed its validity and applicability for reliable identification of OHC, especially FC, even at concentrations lower than 10 mg/L.

The method was also applied to a Nexera UHPLC instrument coupled to an LCMS-8060 for calculation of LRI. The results were absolutely comparable, and underline the concept of applicability of LRI in liquid chromatography.

Next step will be the application of this analytical approach to other matrices, for instance food, due to the increase of scientific articles focussing on evaluation of harmful effects on human health as consequence of furocoumarin dietary intake.