Joy and fear of Christmas baking ... 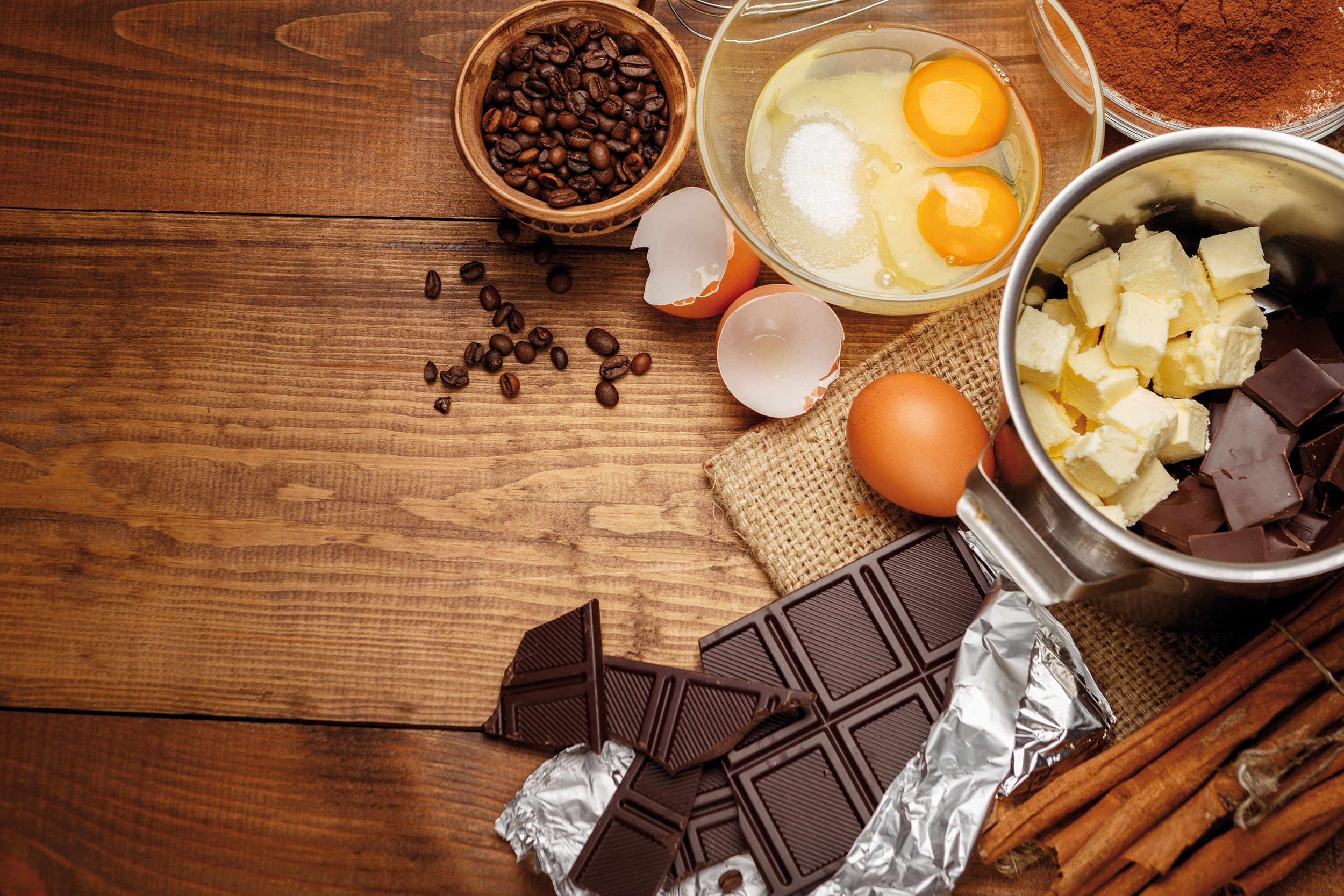 Outside it is dark, wet, and cold, indoors warm and cozy, with coffee or tea and homemade biscuits – quite traditional. As much as cookies warm the soul, within their ingredients may lurk invisible dangers: mold fungus toxins, also called mycotoxins. In addition to grain products, these ingredients include nuts and almonds, dairy products, spices, fruit, and cocoa. For example, aflatoxins are frequently found on fat-rich vegetable products such as nuts, almonds, and corn, while ochratoxin A, fumonisins, deoxynivalenol, and zearalenone can often be detected in cereals and also in corn.

But what exactly are mycotoxins?

These secondary metabolic products of mold have different chemical structures; they can neither be seen nor smelled. They are largely heat-stable and are therefore not destroyed during frying, cooking, or baking. They can lead to different diseases in humans, the so-called mycotoxicoses – in contrast to mycoses, i.e. diseases triggered by fungi themselves. In addition, mycotoxins promote the development of cancer, damage of the kidneys and liver, affect the immune system, or cause diarrhea and vomiting.

Mycotoxins represent, besides antibiotics, the second largest group of active ingredients synthesized by microorganisms. As well as antibiotic-forming microorganisms, mycotoxin-forming mold fungi are distributed worldwide. The toxins, which are contained in certain higher fungi (e.g. amanita), are not included among the mycotoxins in the narrower sense. [1]

Contamination and transfer of mycotoxins

Mycotoxins are usually produced when a fungus finds particularly favorable growth conditions, such as moist, warm weather conditions. A distinction is made between primary and secondary contamination. Primary contamination is the direct infestation of the plant on the field with so-called field fungi (Fusarium). This leads to plant diseases and to a lower harvest yield. Unfavorable storage can also lead to mold fungi, the so called storage fungi (Aspergillus and Penicillium species).

Secondary contamination, on the other hand, is referred to when the already finished food becomes moldy due to being stored too long or incorrectly. This is easily recognizable by the well-known mold growth.

Mycotoxins can also enter our food products by transfer (carry-over). Via their feed, productive livestock are contaminated with mycotoxins, and from there these can reach (partly in metabolized form) food products obtained from animals, such as meat, eggs and dairy products.

The year 1960 was of central importance for mycotoxin research. That year, 100,000 young turkeys in England and one million young trouts in the United States perished from the mysterious “Turkey X Disease.” The feeding of the residues of peanut pressing, originating from the processing of moldy peanuts, could be identified as a trigger for this mass mortality. The aspergillus flavus, which had grown, had formed so far unknown mycotoxins in high concentrations, the so-called Aflatoxins. [2]

Since food and animal feed contaminated with mycotoxins can no longer be purified and therefore should not be used, it is important to prevent fungal attack and thus mold in the first place by adhering to good agricultural and manufacturing practices. The final consumer should make sure that the food is stored in a dry and cool location and that discolored nuts with an unpleasant smell are not consumed. Cutting off the moldy areas of the affected food often does not help because the fungus has already spread out invisibly.

In case of doubt, moldy goods should no longer be consumed.

Because of the risk of mycotoxins, the European Union and many other countries have set limits. In the European Union, this is done by regulations of the EU Commission setting the maximum levels for certain contaminants in food products (Regulation [EC] no. 1881/2006 and supplements). [3] Aflatoxins in nuts, for example, are limited to a maximum content of 2 µg for aflatoxin B1 per kg and 4 µg for the sum of aflatoxins B and G per kg or 50 µg of zearalenone per kg in bread, pastry, and biscuits.

It is therefore desirable to be able to determine as many of the mycotoxins to be controlled as possible, using only one analytical method, independent of concentration range and sample matrix. The analysis of such multi-analytical samples is facilitated by the increasing use of liquid chromatography, coupled to a triple quadrupole mass spectrometer (LC-MS/MS).

Sensitive detection of mycotoxins by means of LC-MS

The following application example shows a process which allows almost all relevant mycotoxins for baking ingredients to be determined with only one method. (In case of deoxynivalenol, a modified extraction method must be performed due to the polarity of the molecule.)

5 g of the ground sample (nuts, almonds, flour, etc.) were mixed with 20 mL of a water/acetonitrile mixture (50/50 v/v) and treated in an ultrasonic bath for 5 minutes. The sample was then shaken for 30 minutes at room temperature before a part of the supernatant was further processed after centrifugation.

The supernatant was diluted with water and, after appropriate conditioning of the solid phase cartridge (ISOLUTE® Myco, Biotage, Cardiff, UK), transferred, washed and eluted with solvent. The eluate was completely evaporated and reconstituted with 300 µL of a 20 % acetonitrile/ methanol + 0.1 % formic acid solution. Before the sample is injected into the LC-MS/MS system, it is recommended to filter it through a filter vial (0.45 µm PTFE).

For the analysis of the extracted samples, a Nexera X2 UHPLC system was used, coupled to an LCMS-8060 Triple Quadrupole Mass Spectrometer (both Shimadzu; figure 1). 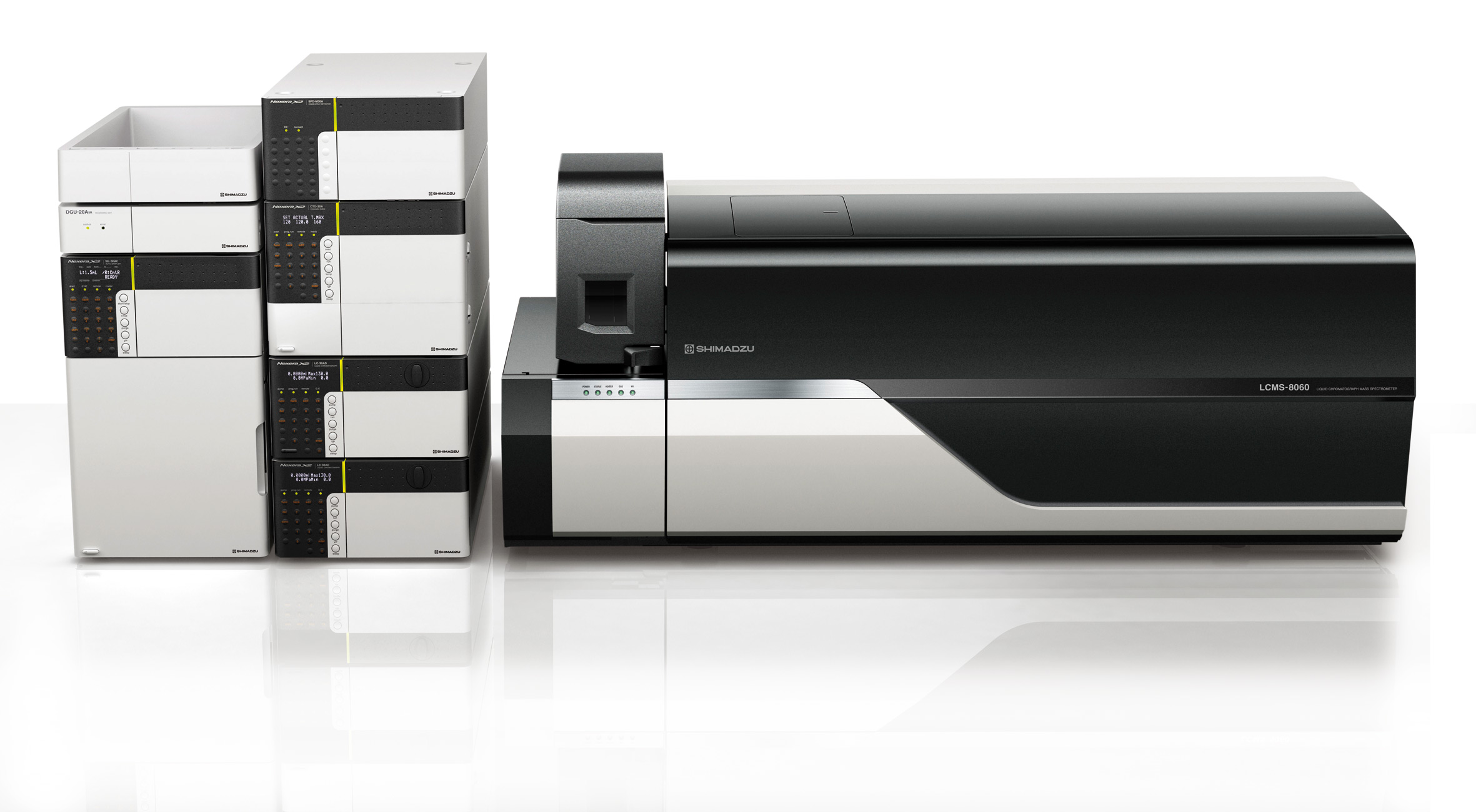 The LC conditions used originated from an already described method. [4] A detailed description of the method can be downloaded using the QR code at the end of this article. In the case of the described measurements, a Mastro C18 chromatography column (150 x 2.1 mm, 3 µm, Shimadzu GLC Ltd.) was selected, which is able to produce excellent peakshape due to its internal structure (figure 6), even in chelate-forming substances such as fumonisins.

Thanks to the described method, the limits required by the EU regulation were easily met for all mycotoxins analyzed. Figure 2 shows the calibration curves of aflatoxins B1 and B2 as well as G1 and G2 extracted from ground almonds. 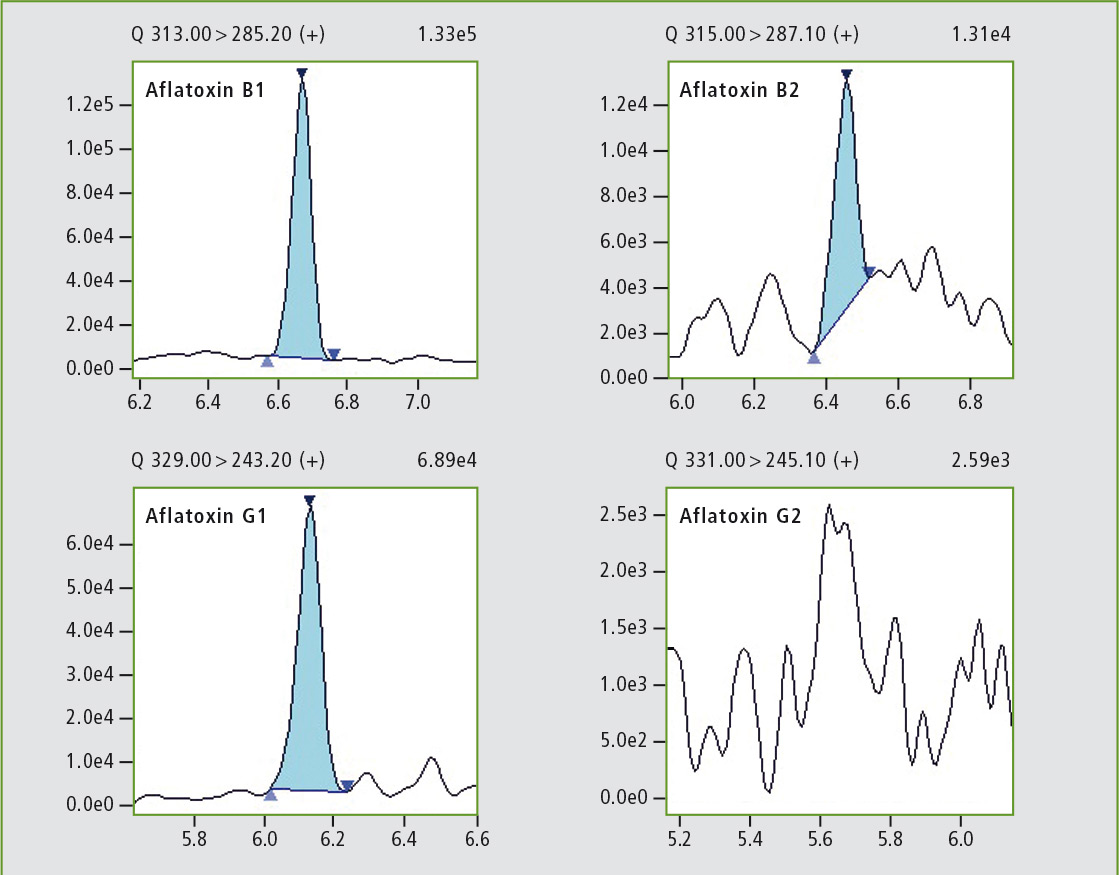 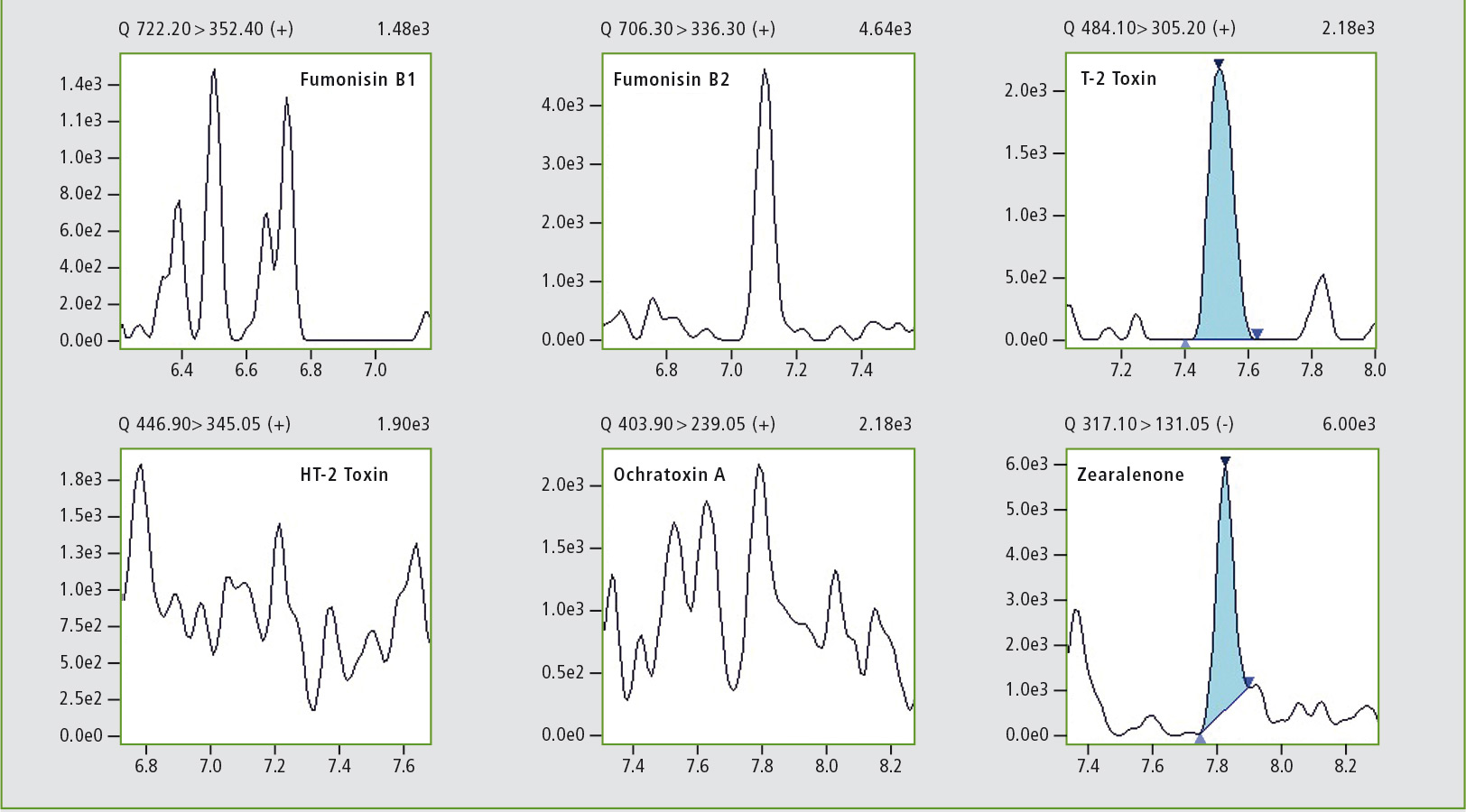 Figure 3: Mycotoxins in a hazelnut sample

In addition, the so-called “MRM spectrum mode” was used for analysis. Here, not only the fragments of the quantifier and the qualifiers are determined, but also a higher number (typically 6-10) of MRM fragment ions. Using this MRM spectrum mode, conventional MRM quantification is combined with a high-quality MRM product ion spectrum, which can be used in a library search routine, thus increasing the specificity and verification of results (figures 4 and 5). 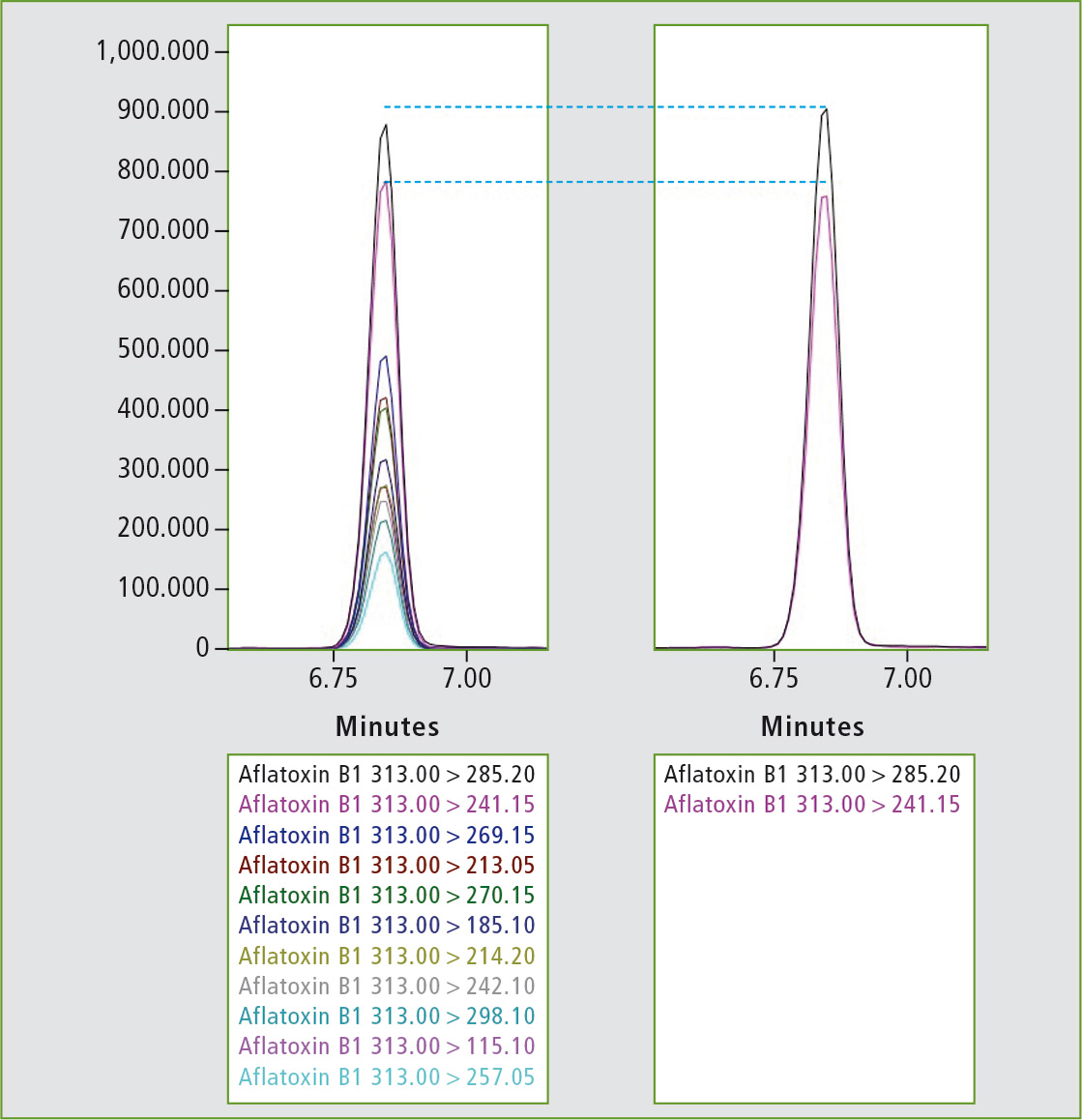 Figure 4: The figure shows MRM chromatograms for aflatoxin B1, one recorded with the usual 2 fragment ions, and compared with a method with higher number (11) of fragment ions which, despite this fact, have the same sensitivity. 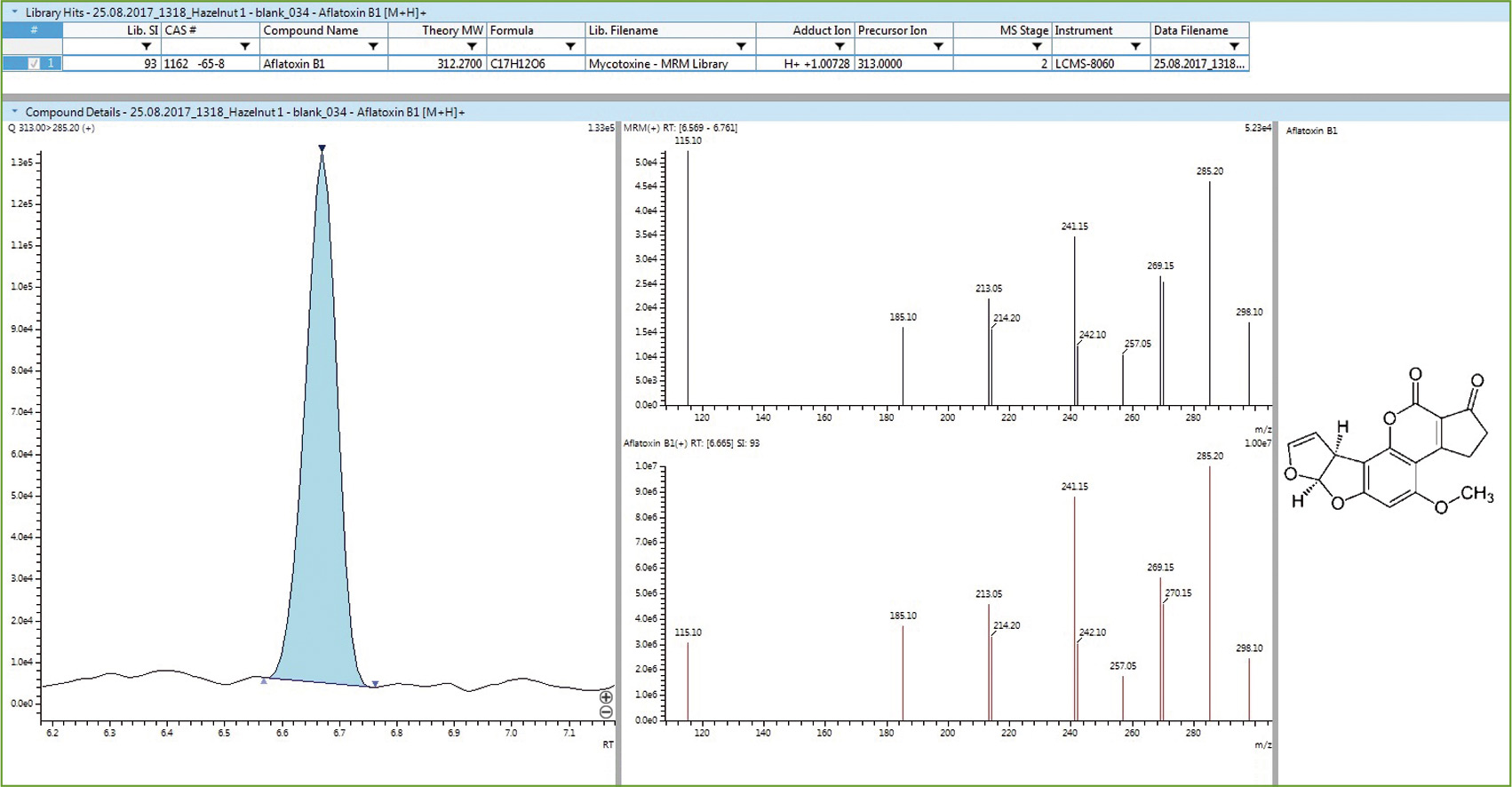 The manufacturer is responsible for the safety of food products. They must ensure by internal checks that the food products produced do not have any negative impact on the health of the consumer. [3] In order to ensure this and to ensure the maximum levels for certain contaminants, rapid and sensitive multi-analytical methods are essential for food analysis. This begins with monitoring the raw materials and should help to make sure that contaminated food does not enter the market in the first place.

Nevertheless, some, almost unavoidable, contamination with mycotoxins could be demonstrated in the examined samples. Two samples even exceeded the applicable EU limits for individual mycotoxins.

In spite of these exceptions, everybody should enjoy baking and eating their own cookies. If excessive consumption threatens health, then it is most likely due to weight gain!