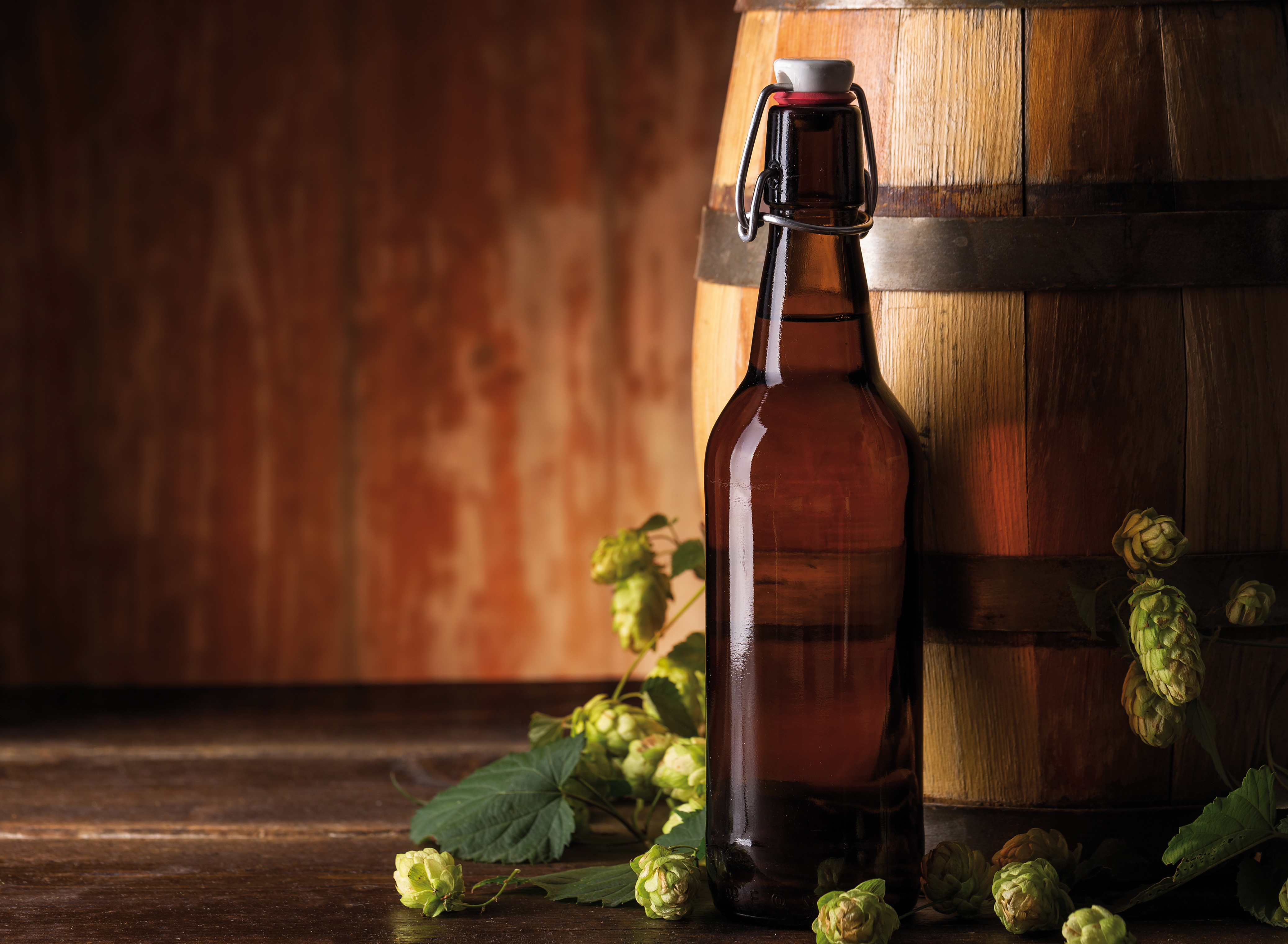 By using a standard LC-MS/MS system set-up, the analysis of Glyphosate and AMPA in beer could be simplified, without requiring an additional instrument, e.g. a liquid handling system for sample pretreatment. By staggering the pretreatment and the LC-MS/MS analysis, the method is very time-efficient. Calibration curves showed excellent precision and accuracy, and even in a complex matrix such as beer, Glyphosate and AMPA can be quantified at or below 5 ng/mL, which is below the EU maximum residue levels (MRL). 60 % of all tested beer samples contained traces of Glyphosate, but all of them were far below MRL.

Glyphosate is currently one of the most common pesticides used worldwide. In spite of its approval by regulatory bodies all over the world, the concern about its harm to humans and the environment persists. [1, 2] Therefore, the strict control of Glyphosate and its metabolite aminomethylphosphonic acid (AMPA) in food and environment is mandatory.

In 2016, the year of the 500th anniversary of the German Beer Purity law, Glyphosate has gained dubious fame after being found in many German beers. [3] While there are defined maximum residue levels (MRL) for drinking water and some food products, there is no dedicated MRL for beer. [4] In this case, the MRL of the individual ingredients apply, e.g. the MRL for barley which is used for malt production (20 mg/kg) or for hops (0.1 mg/kg). These values are far above the MRL for drinking water (0.1 µg/L).

The quantification of glyphosate and AMPA is very challenging. On the one hand, both molecules are highly polar which does not allow enough retention on reversed-phase columns. On the other hand, there are not many transitions for LC-MS analysis available for these molecules due to their small molecular weight. Additionally, beer is a complex matrix that requires good chromatography.

In order to overcome the low retention of Glyphosate on reversed-phase columns, there is a well-established method that includes a derivatization step with 9-fluorenylmethyl chloroformate (FMOC) [4] followed by LC-MS analysis. FMOC derivatization leads to a decreased polarity allowing chromatography on a standard reversed-phase column. The derivatization requires several pipetting steps. They can be executed manually, which is tedious and prone to errors, or automatically, which requires dedicated additional hardware.

This article reports a fully automated derivatization followed by LC-MS/MS analysis of beer samples. The instrumental set-up does not require any additional hardware for sample pretreatment, but uses the built-in pretreatment function of the autosampler.

Sample preparation
A beer sample of 500 µL was mixed with 500 µL methanol in order to precipitate proteins. After vortexing, the samples were centrifuged (15 minutes, 12,000 g) and set into the autosampler, which handled all further sample pretreatment steps fully automatically.

The highly polar Glyphosate as well as its degradation product AMPA are very well soluble in water, but not soluble in other solvents like methanol, isopropanol or acetonitrile. In contrast to that, the non-polar FMOC is not soluble in water but can be solved easily in organic solvents. Bringing together the analyte and the derivatization agent in an environment that allows solubility for both of them is crucial for the whole analysis.

One way to achieve this is incubation at a higher temperature. This increases the solubility of FMOC in water and is therefore applied very often for the analysis. [5] For an automated approach, this requires a dedicated instrumental setup enabling heated incubation.

In this report, a good solubility could be achieved for FMOC, Glyphosate and AMPA in a solution with 50 % methanol (data not shown) without heating the sample during incubation. This allowed a fully automated pretreatment of the samples by using the pretreatment function of the autosampler. The only manual pretreatment required was adding 500 µL methanol to 500 µL beer, vortexing the sample and centrifugation.

The supernatant was set into the autosampler, which executed all following steps (adding FMOC and internal standard, stopping the reaction) automatically (figure 1). After derivatization the sample was injected directly to the LC-MS/MS and analyzed accordingly. The time required for all derivatization steps is only 15 minutes. 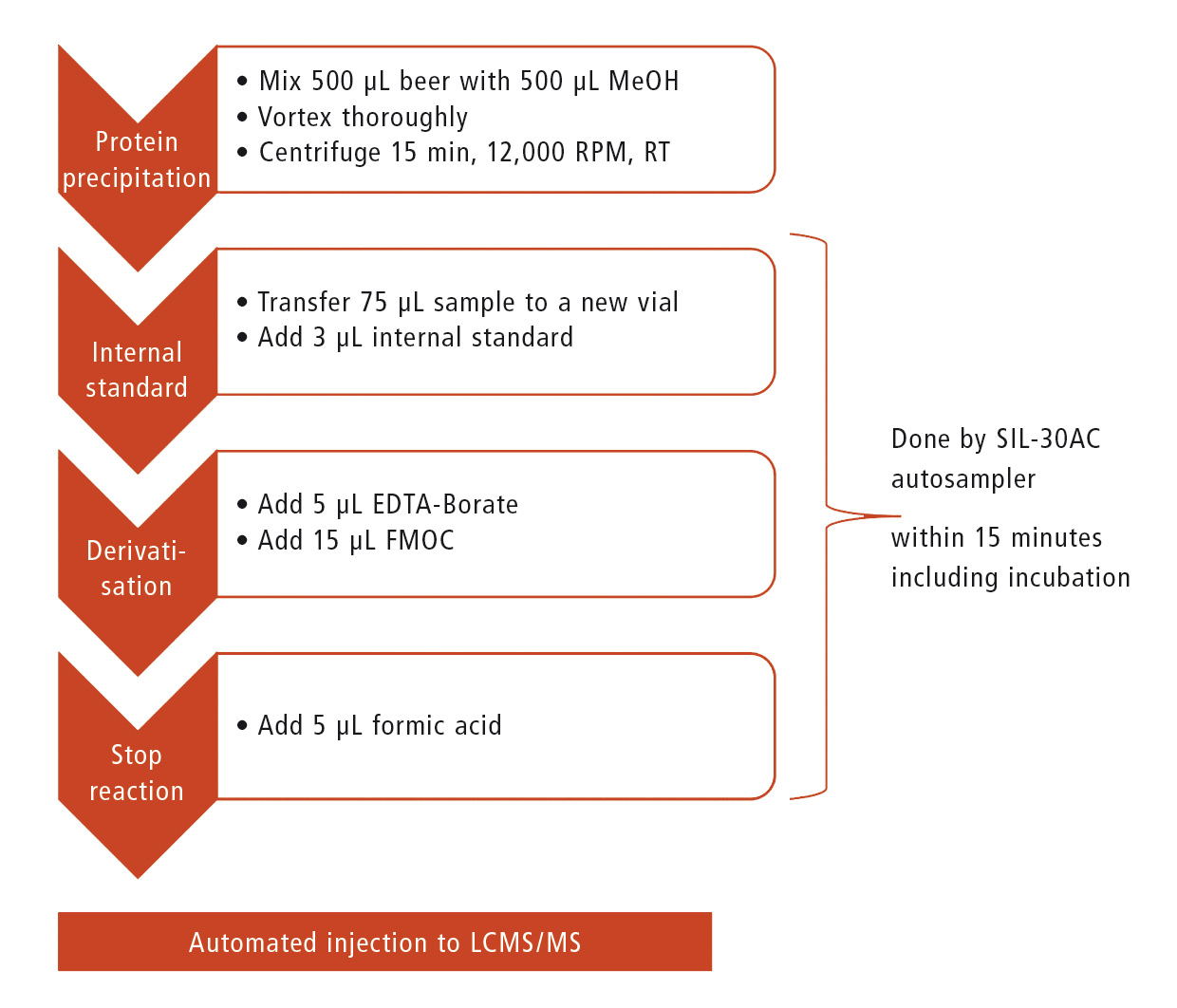 Figure 1: Workflow of sample pretreatment. Addition of internal standard as well as all remaining derivatization steps are done by the autosampler.

The following chromatography also requires 15 minutes. Due to the overlapping sample pretreatment functionality, the next sample was already pretreated during the on-going analysis in order to maximize sample throughput (figure 2). Except for the first and the last sample, the total time per sample for automated pretreatment and analysis can be reduced to 15 minutes.

Figure 3 shows typical chromatograms for LOQs of Glyphosate-FMOC (2.5 ng/mL) and AMPA-FMOC (5 ng/mL) and their calibration curves (Glyphosate 2.5 – 100 ng/mL; AMPA 5 – 100 ng/mL). The method shows excellent linearity for Glyphosate-FMOC (R2 = 0.9986) and AMPA-FMOC (R2 = 0.9995). By analyzing QC samples in three different concentrations (3 ng/mL, 15 ng/mL and 75 ng/mL), the accuracy of the method was proven to be very high. The relative standard deviation was below 10 % for all QC except the smallest QC for AMPA-FMOC, which was extrapolated as it was below LOQ (table 1). 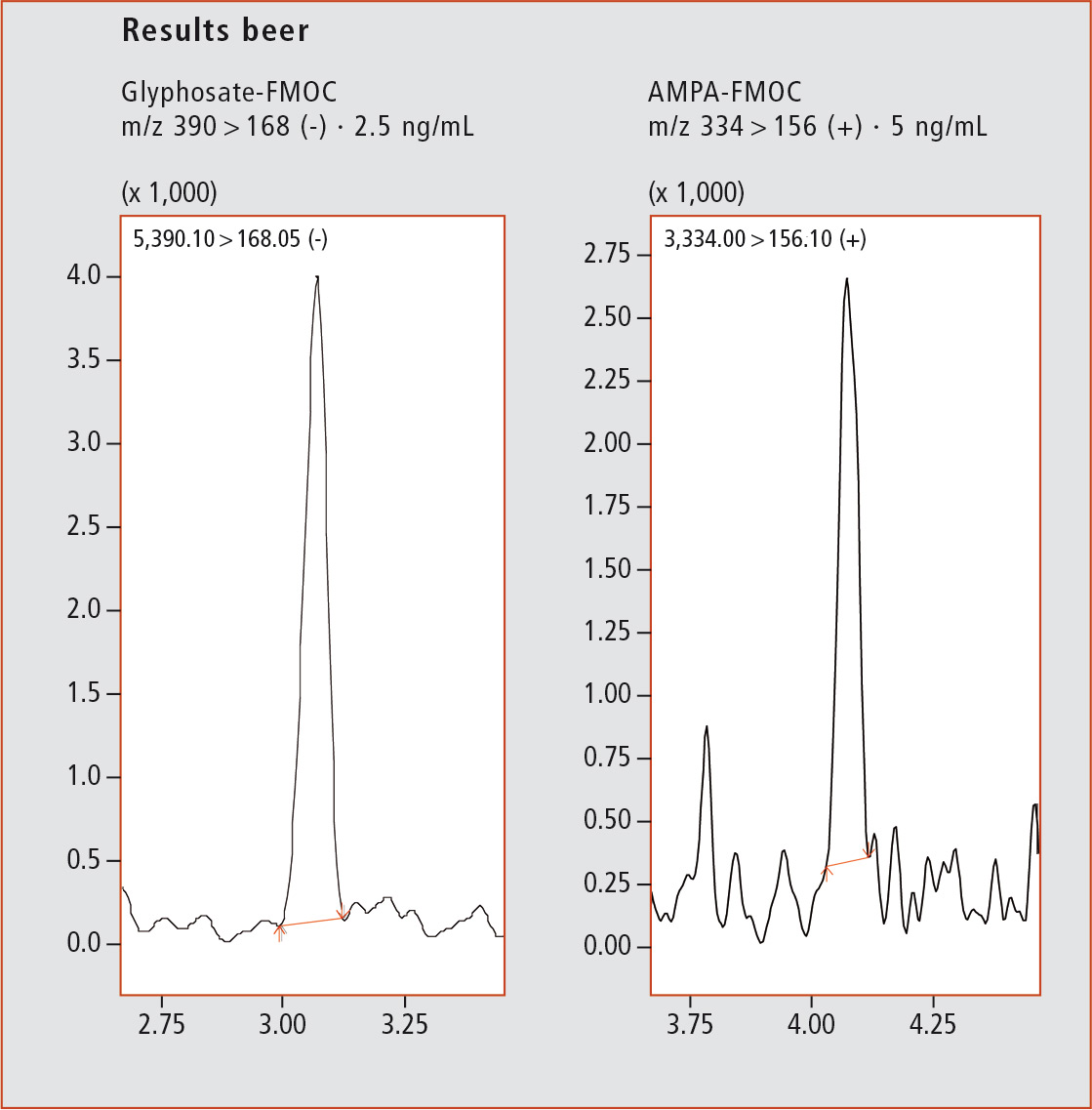 After the successful development of a fully automated method, a total of 40 commercially available beer samples were analyzed. Among these samples, there were 21 samples of beer brewed according to Pilsener style, three samples of organic beer, ten samples of other types of beer, and six samples of alcohol-free beers or non-alcoholic beer mix drinks.

All samples were analyzed in duplicate in two consecutive runs. While Glyphosate was detected in 60 % of all samples, its metabolite AMPA was below LOQ in all samples (table 2). 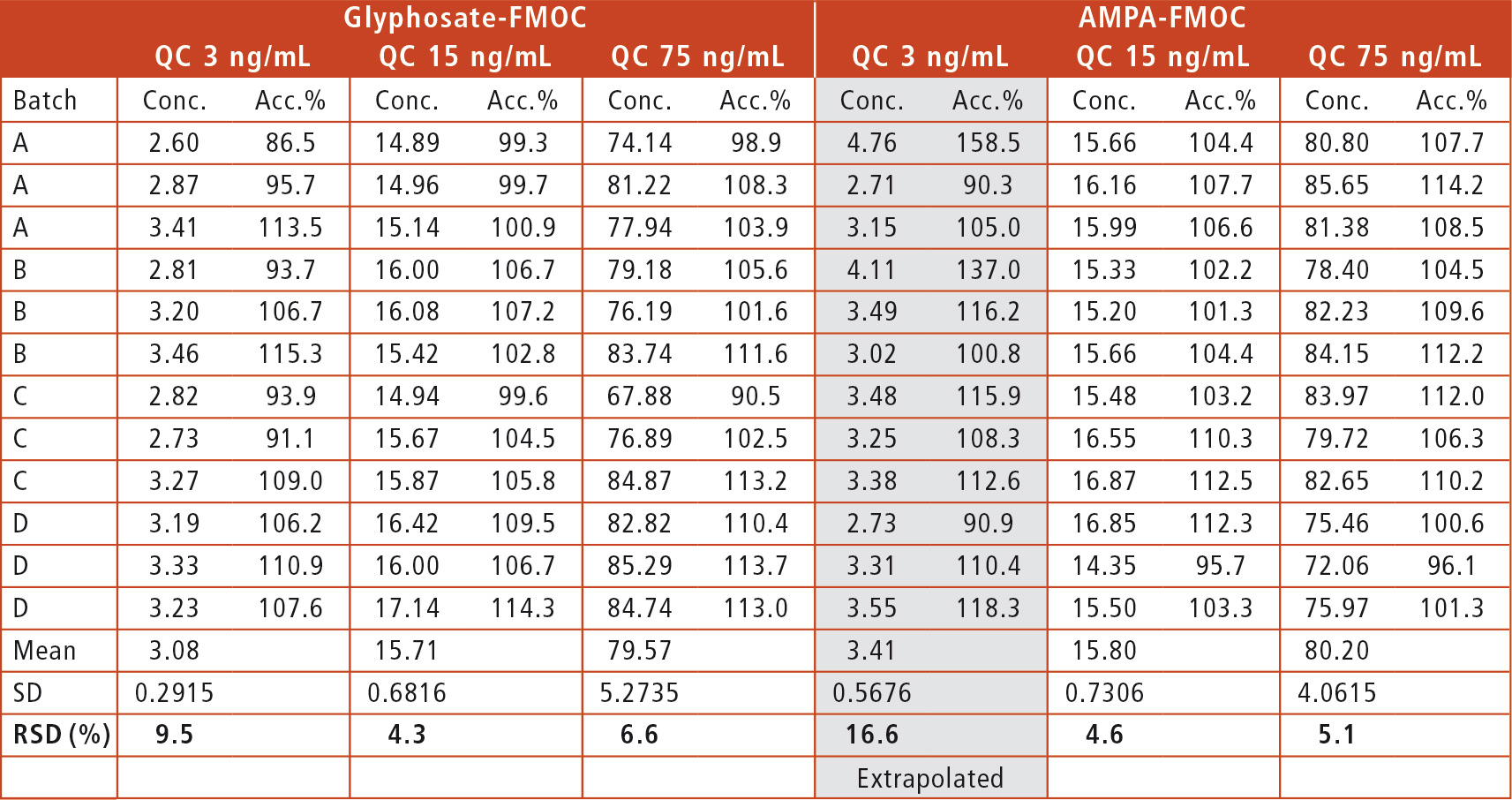 There is no correlation between the kind of beers (Pilsener style, alcohol-free and others like wheat beer) and the detection of Glyphosate, as there were samples containing Glyphosate among all kinds of beers. Only the three organic beers tested were completely free of Glyphosate. But even for the beers tested positively, the amount was far below the MRL so that none of the beers is a health hazard – at least with regard to Glyphosate levels. 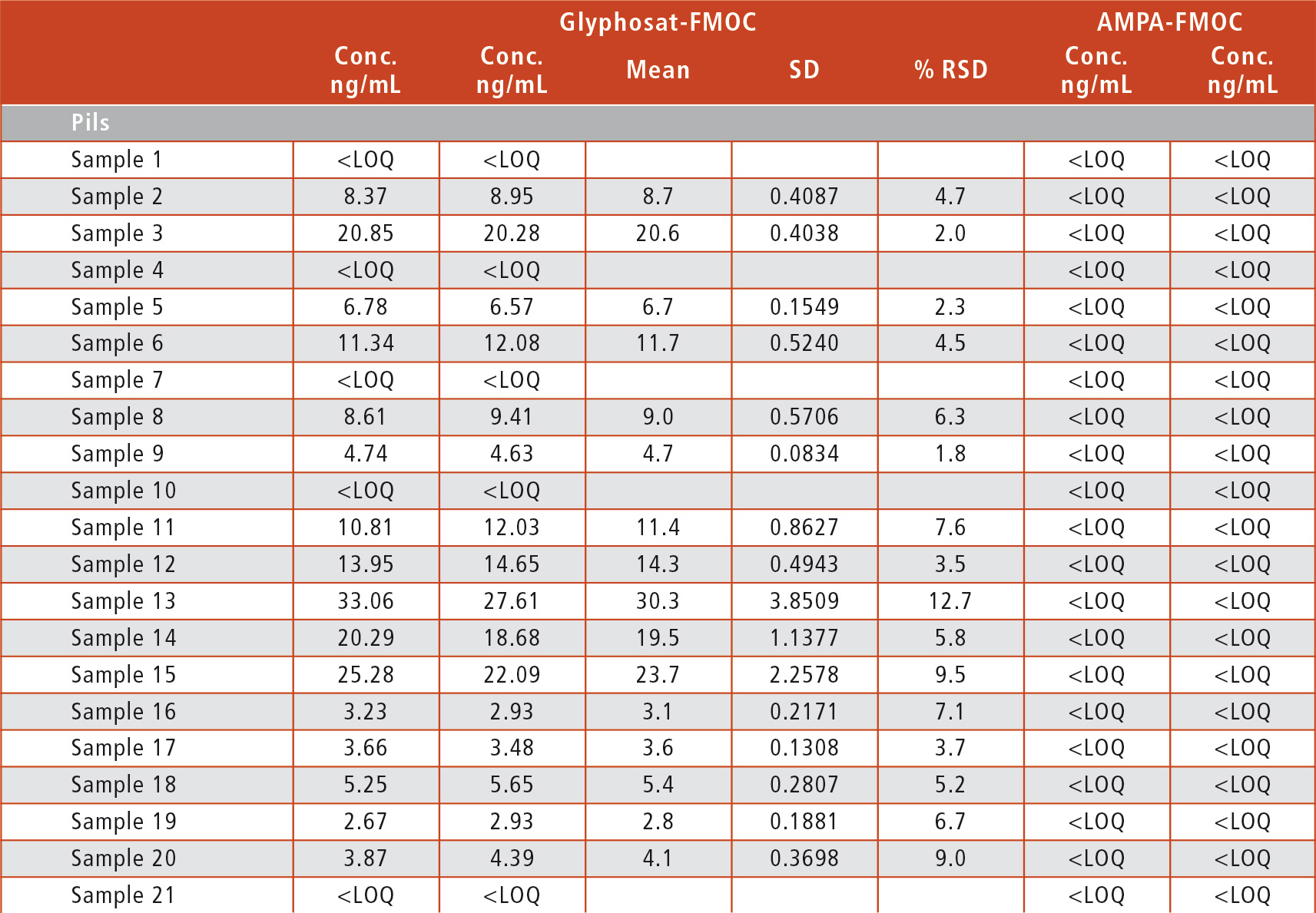 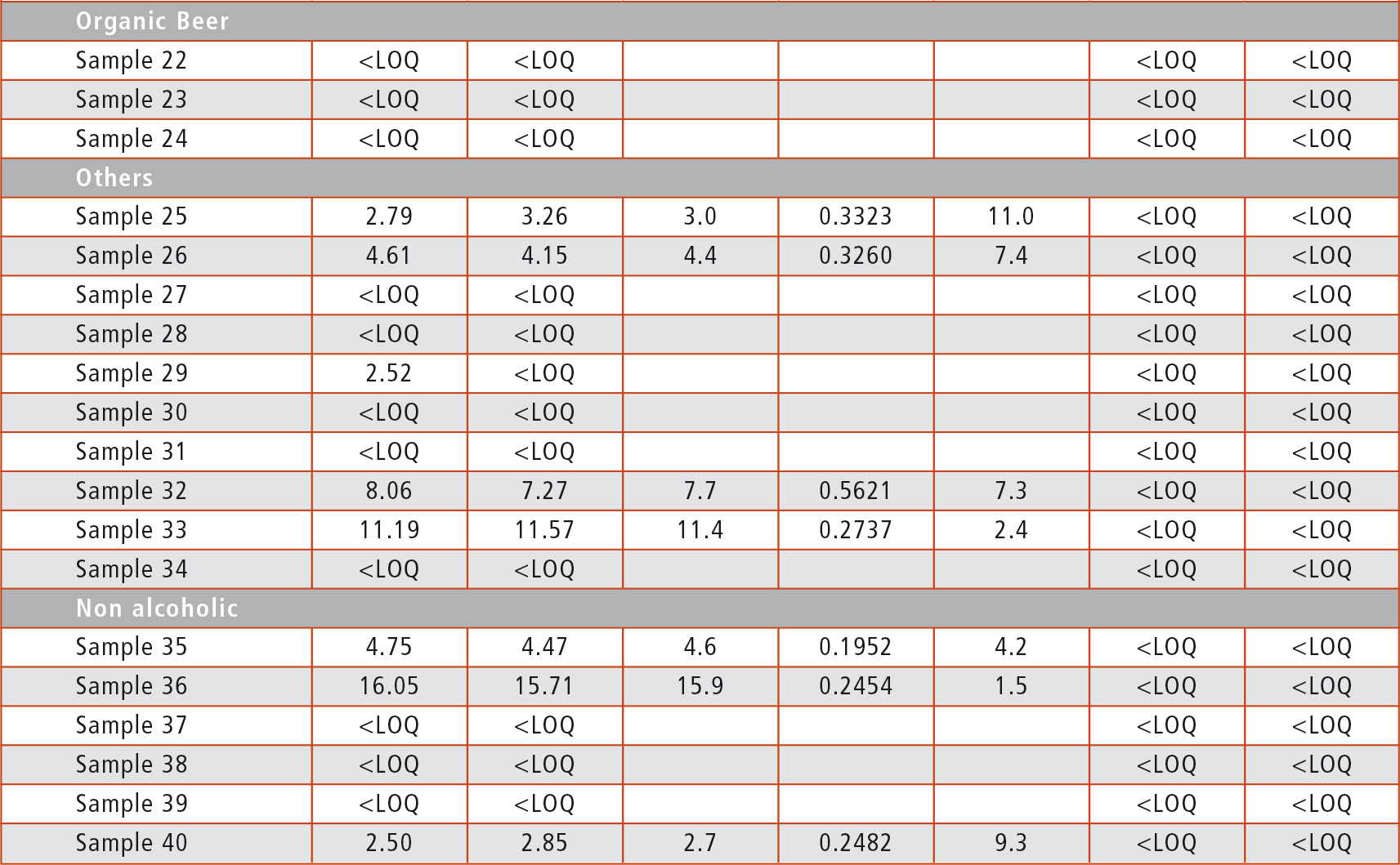 The reported method is able to derivatize Glyphosate and AMPA with FMOC fully automatically within 15 minutes. The only manual pretreatment required is protein precipitation. No additional hardware is required as all pretreatment steps are performed by the autosampler of a standard LC configuration. The method is robust and reliable for samples even in a complex matrix like beer, which makes it suitable for high-throughput analysis. Additionally, the throughput was doubled by using the overlapping sample pretreatment functionality. This allows sample pretreatment while the previous sample is analyzed.