Anyone working with food packagings cannot do without one basic constituent: cellulose. This is a polymer composed of cellobiose units, which are glucose molecules linked together with b1,4-glycosidic bonds (figure 1). Cellulose is obtained from wood and is commonly known as (card)board or paper. Paper makes up the largest proportion of packaging materials. Its advantages are clear: not only is it a cheap, renewable raw material, but waste paper can be recycled and used in the production of new packaging materials.

Figure 1: Cellobiose unit of a cellulosepolymer

Food-safe paper is available, for example, as wrapping paper for direct contact with foods such as fresh cold cuts or as laminated paper as drinking cups for beverages. The range of applications can be illustrated with the following keywords: bio-, to-go, and fast-food packagings. The use of paper-based packagings in the form of cardboard is limited to secondary packaging or for dry foods such as flour, sugar, pasta, and muesli.

On its own, paper does not provide a barrier against moisture and oxygen. Cardboards used for packaging foods are constructed of several layers. The outermost layer contains fillers such as kaolin (SiO2/Al2O3) and talcum (a magnesium-containing sheet silicate) as well as titanium dioxide as a white pigment. These provide smooth, white surfaces that are more suitable for printing than the rough untreated board layer. [1, 2]

In the following, ATR-FTIR spectroscopy is used to quickly determine the main components in the surfaces of packagings. The acronym ATR stands for “Attenuated Total Reflection”, which describes the applied measuring principle: IR radiation is passed through an optical element, e.g. a diamond crystal, before it reaches the sample. Most of the incident radiation is reflected by the interface between the sample and the ATR crystal, whereas a small fraction penetrates the sample and interacts with it. The resulting attenuation of the total reflection is measured.

The penetration depth of the IR radiation depends on the angle of incidence and, in the present experimental setup, it is approx. 2 µm. However, multilayer systems cannot be analyzed adequately in this way, because the layers are often only a few microns thick and cannot be separated from each other. IR microscopy, however, can be used to make ATR measurements of the cut edge of a multilayer system. 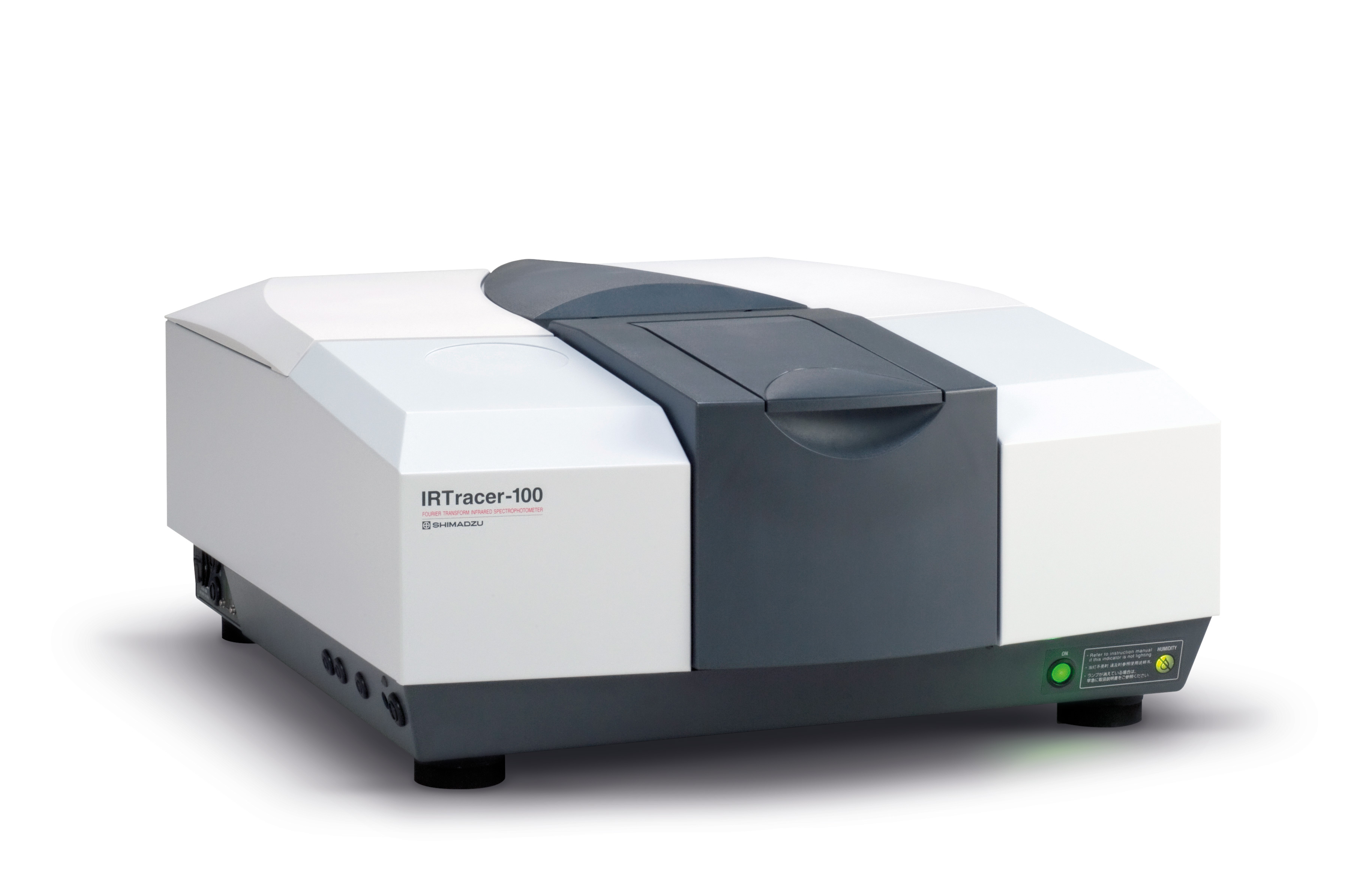 The measurements shown here were carried out with an IRTracer-100 with a diamond ATR (Quest). Several components can be identified in the infrared spectrum (figure 2a) of the outer surface of a cardboard box for chocolate bars.

The first database search identifies a copolymer composed of styrene and allyl alcohol monomers. These are constituents of the colored print. By generating a difference spectrum between that of the sample and that of the identified components, it was also possible to identify kaolin and calcium carbonate (figure 2b – 2d). 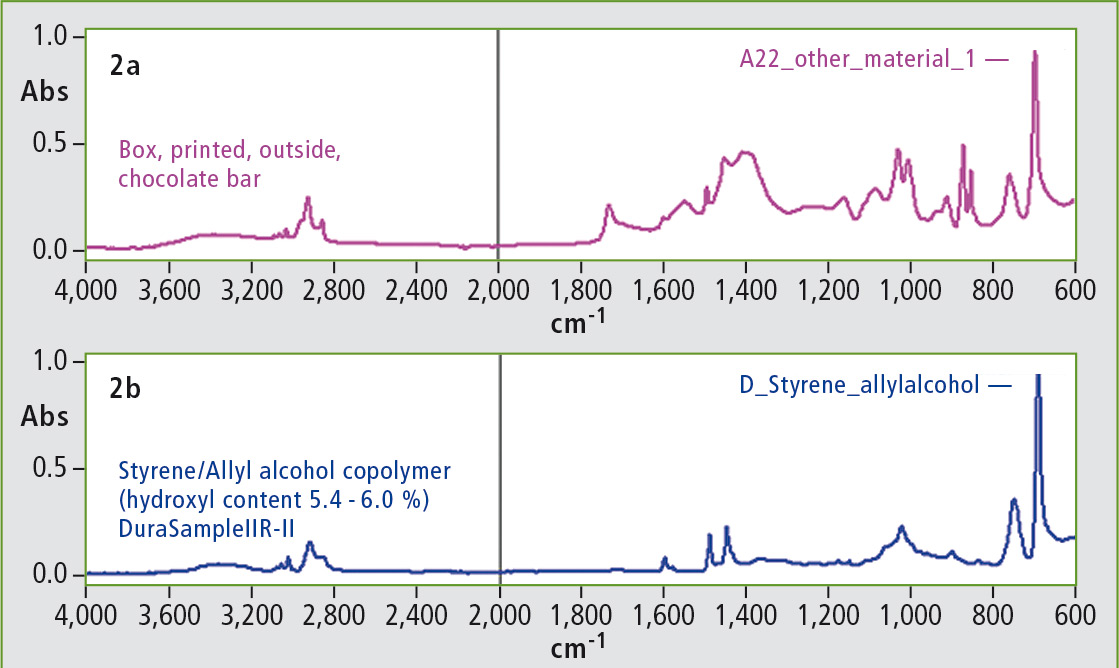 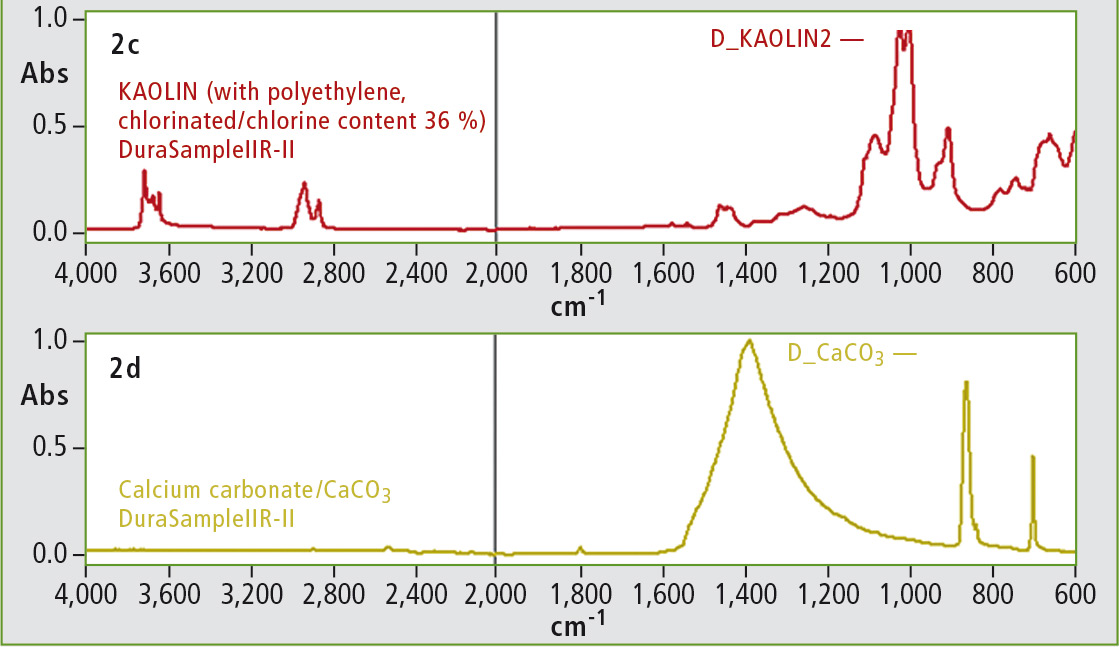 Figure 2a to 2d: Spectrum of a cardboard box (2a) and the constituents identified in it: styrene/allyl alcohol copolymer (2b), kaolin (2c), and calcium carbonate (2d)

Paper packagings are stabilized against moisture by laminating them with PE (polyethylene) layers, which extends the application range for paper packagings. Examples of this include milk cartons and coffee cups.

Furthermore, the PE film makes the packaging more tear-resistant. However, since PE is permeable to CO2 and O2, its use is limited to fresh foods that are consumed within a short time. [3]

The use of paper in packagings can contribute to shaping its image and also boost the reputation of the food itself. For example, the FSC logo can be awarded for using wood from “sustainable sources.” This logo characterizes the product as being particularly environmentally friendly. [4]

Paper is also often used as a component of packagings for high-quality products. Only a very few of our purchasing decisions are based on logic; neurological research has even shown that all decisions are driven by emotions. [5] In addition to the copy text of ads, visual and haptic effects also play a major role in influencing purchasing behavior, and this leads to the use of packaging systems with a complex composition.

Examination of a bag used for Em-eukal throat lozenges (see figure 3) revealed that both the yellow lozenge as well as the “Em-eukal” lettering on the packaging had a smooth shiny surface. An FTIR analysis showed that this was due to a PP (polypropylene) film. Furthermore, the inside of the bag is coated with an ethylene/acrylic acid copolymer, which is used as an adhesion promoter or for sealing packaging films. In addition, nitrocellulose, which is a typical constituent of printing inks, was found on the printed outer surface of the bag. 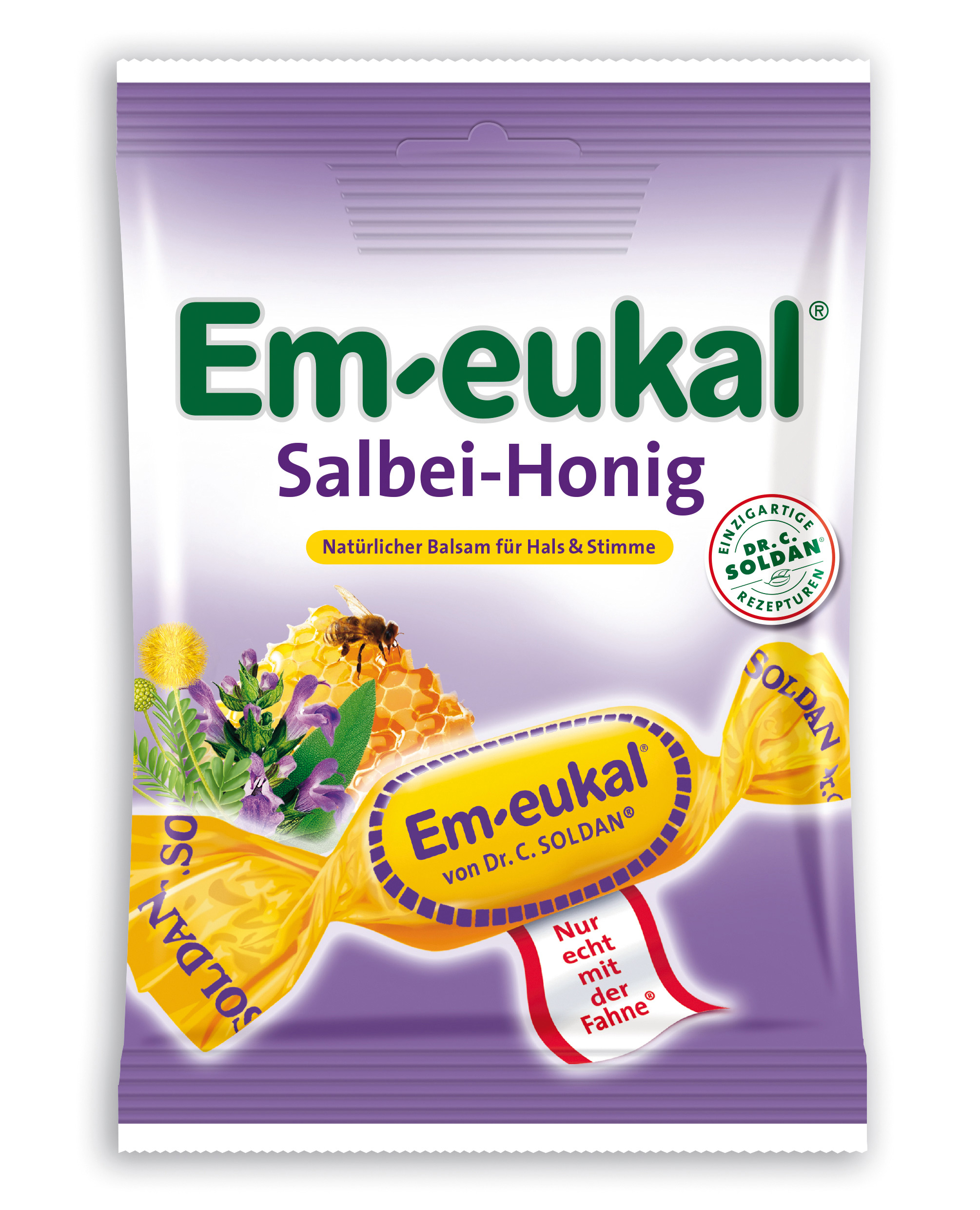 Figure 3: Paper bag for throat lozenges whose components were investigated with FTIR. [6]

Thus, this simple ‘paper bag’ was composed not only of cellulose, but also three other materials, which gives the consumer the impression of a high-quality product. [3]

IR microscopy can also be used to analyze the components of packagings, for example, using Shimadzu’s infrared microscope AIM-9000 with a germanium-based ATR objective. The germanium crystal is used as the optical element. A cut is made through the layers of the Em-eukal bag. This reveals fibers close to the purple surface and a plastic film. The ATR crystal can be used to record spectra of 100 µm2 areas of the corresponding layers. The investigated object and two of the measured spectra are shown in figure 4. 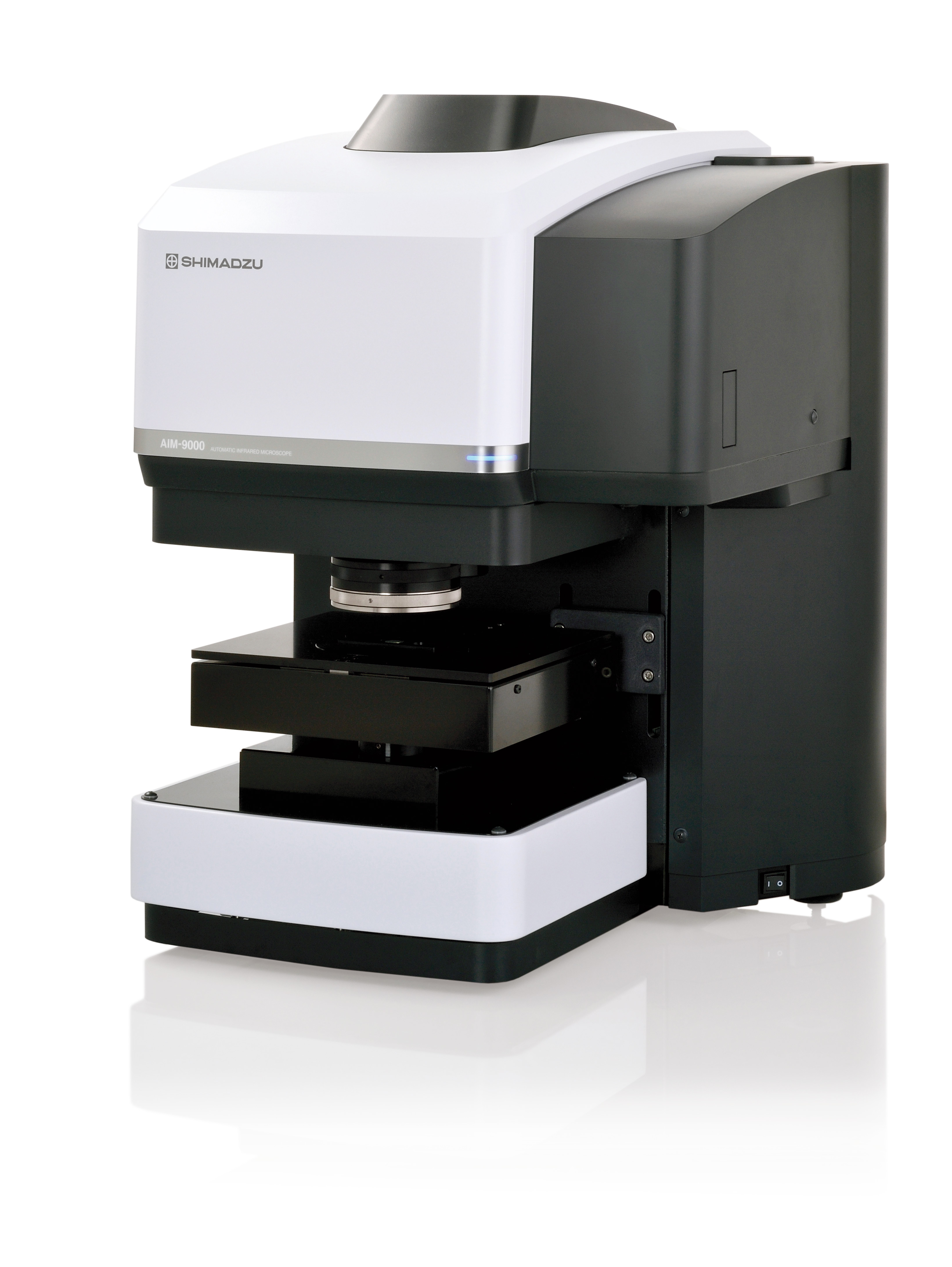 Paper is a popular material for packaging foods. Many different materials are used in combination with paper, and each of these can be identified quickly and nondestructively with FTIR spectroscopy. As demonstrated here, some paper packagings consist of several layers as a combination of polymer coatings around the paper. The infrastructure of such a multilayer system can be investigated by means of infrared microscopy, which can be used to analyze layer thicknesses in the µm range.