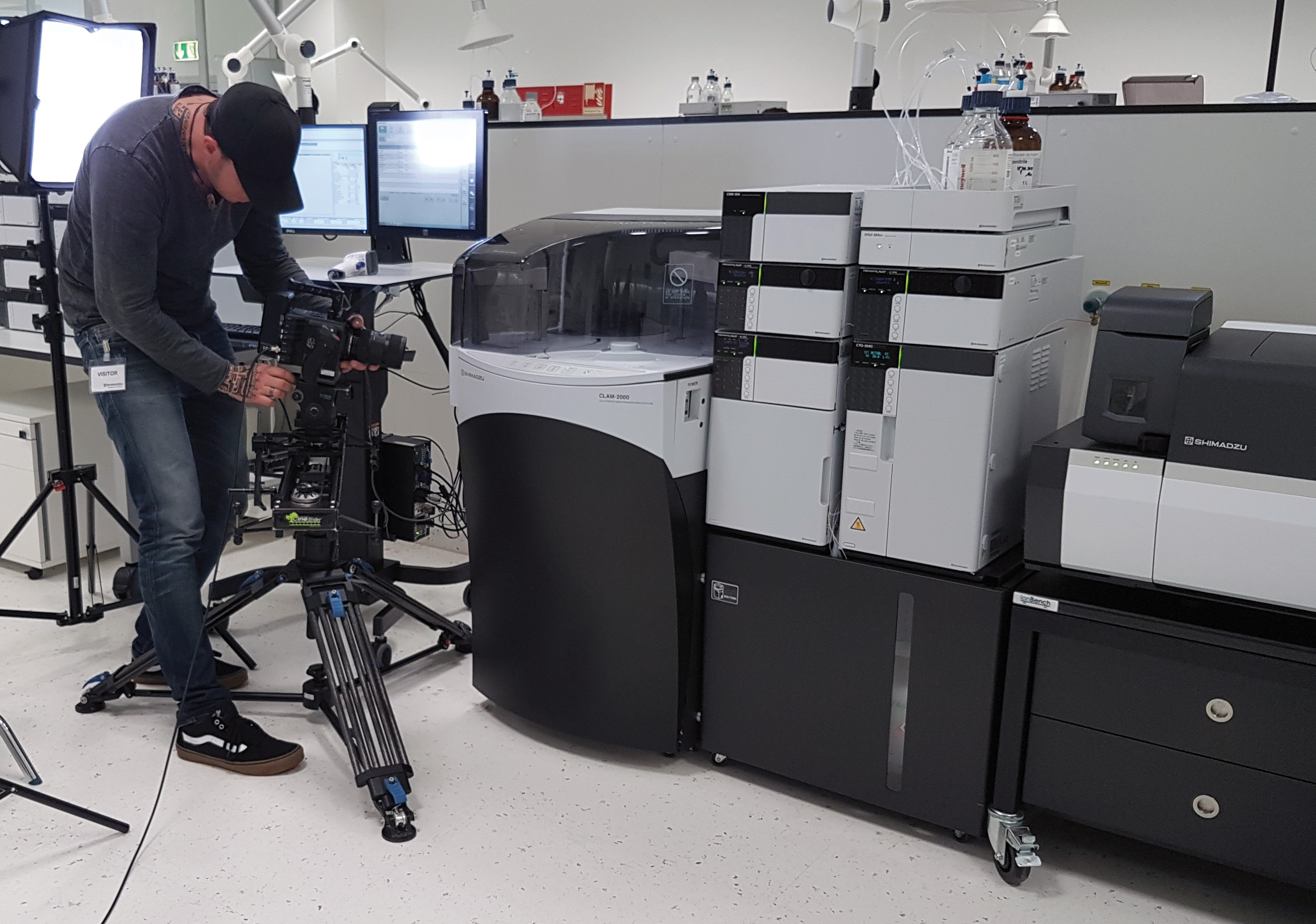 Since its launch at the 2016 Analytica trade exhibition in Munich, CLAM-2000 has been a whirlwind during trade events such as MSACL shows and EuroMedLab, and revolutionized the world of clinical analysis allowing easier access to the use of LC-MS/MS.

In September 2016, CLAM-2000 made its official debut in a private sector laboratory in Cologne, Germany. After one year of service in different places across Europe, it is time to share the experience how CLAM-2000 is breaking the wall between the world of clinical analyzers and the associated technology of LC-MS/MS liquid chromatography coupled to tandem mass spectrometry.

Shimadzu’s Clinical Bio Division has a long-standing history in producing clinical analyzers marketed as OEM equipment by other well-known suppliers, such as Werfen Group, Sekisui and Abbott. At the same time, the Mass Spectrometry Division from Shimadzu made an important breakthrough in the LC-MS/MS market by introducing Ultra-Fast Technologies, sensitivity and robustness for highly demanding applications like therapeutic drug monitoring in whole blood or plasma. The benefit of coupling both divisions’ technologies to simplify access to LC-MS/MS in the clinical field became obvious in order to fill the gap, because the main restriction for the penetration of mass spectrometry is the sample preparation prior to LC-MS analysis.

In August 2017, a video team toured through several laboratories in Germany, France, and Italy to collect users’ experiences on working with CLAM-2000. The footage covers applications in university hospitals, testing and validation in clinical laboratory environments, toxicology analysis, and private sector laboratories. Cutting-edge scientists and researchers provide insights into their daily routine applications with CLAM-2000.

Prof. Franck Saint-Marcoux, Full Professor of Toxicology at University of Limoges, France, describes CLAM-2000’s automated sample pretreatment as the new revolution. Its main advantage is the increased speed of the workflow: it can be fully programmed, which reduces the need of explanation towards the staff or the technicians. “The global capability of LC-MS/MS is no longer a problem,” he says.

“CLAM-2000 is a kind of fire & forget system: it does all the work for you,” explains Dr. Lars Kröner, department of toxicology of the Cologne, Germany based Dr. Wisplinghoff laboratory. The company is specialized on full service of clinical toxicology and clinical analysis for different diseases. The lab works for over 40 hospitals, and applies CLAM-2000 particularly for the 50 – 100 emergency samples per day. This way, the up to 1,000 high-throughput sequences running each day do not have to be interrupted. Dr. Kröner describes the use of their own in-house method as the system’s main benefit. “We can put all methods of other systems on the CLAM system. Changing parameters of a method is no problem as we can do all programming on our own.”

For the clinical research department at University Hospital in Göttingen, Germany, CLAM-2000 is the ideal tool for measuring samples even if the staff lacks any specific chromatographic and mass-spec experience.

CLAM-2000 is controlled via VPN (Virtual Private Network) which enables method development also from other places. Dr. Frank Streit, Department Head, says that “accuracy and precision for the determination of the analytes is better than using an LC-MS system and offline sample preparation.”

Prof. Paolo Brambilla, Head of Clinical Chemistry Laboratory, DESIO hospital, Milan, Italy, also appreciates the higher accuracy especially at lower concentrations, and the increased sensitivity. According to him, CLAM-2000 avoids a lot of interferences. He says: “The system is exactly what we need in clinical analysis.”

The brief experts’ reviews on CLAM-2000’s benefits are available in full length through the QR code.