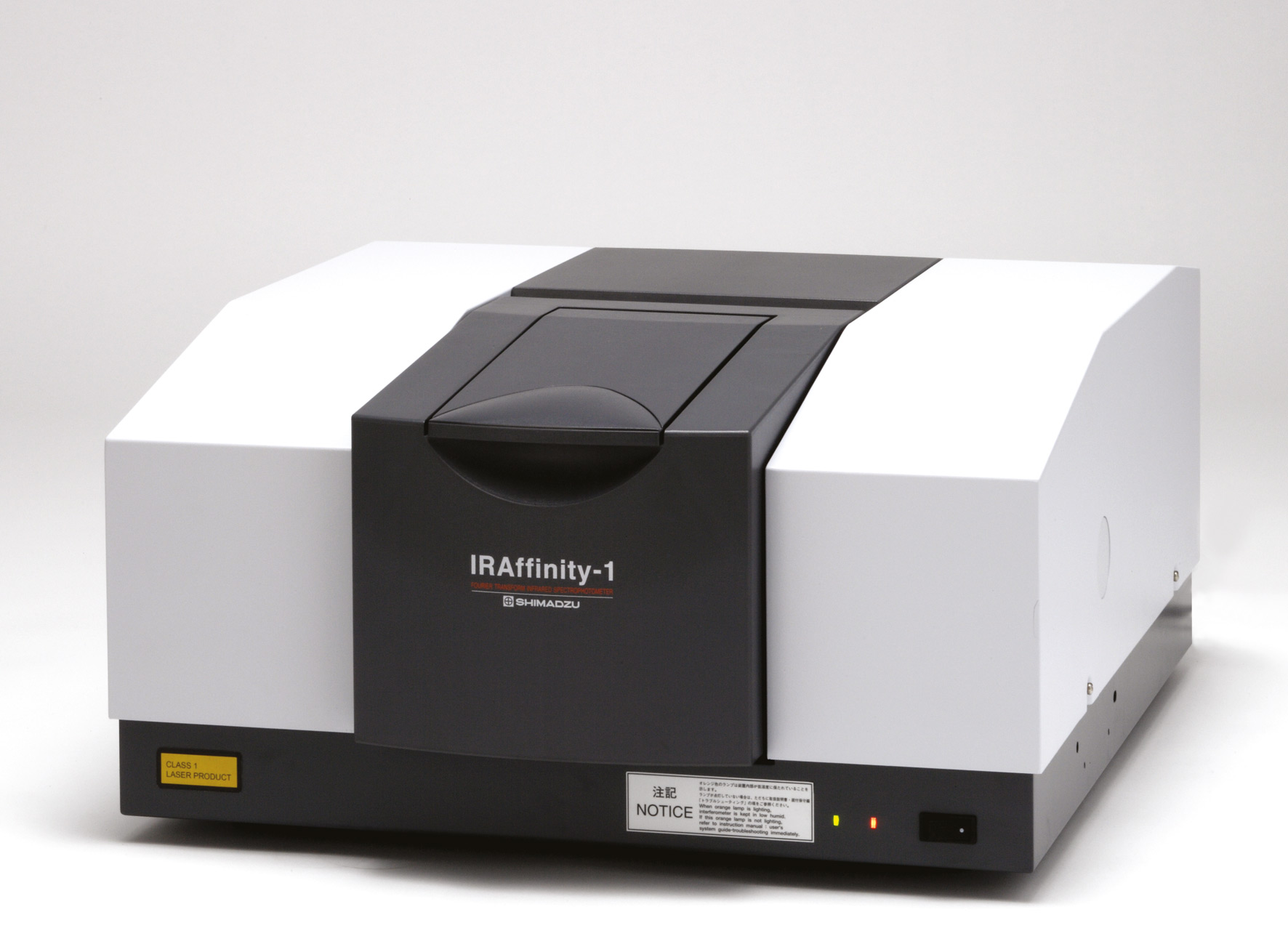 Raw materials are becoming increasingly scarce and more expensive. In its IP/11/122 press release entitled “The Commission calls for action on commodities and raw materials”, the EU Commission not only discussed the supply of raw materials but also specifically mentioned resource efficiency in order to promote recycling.

Recycling of polymers is an important environmental issue. But this is a difficult road to travel, as new legislation specifies clear threshold values (RoHS*), thereby limiting recycling options. Regranulates designated for subsequent processing must be tested according to these regulations.

Fast analysis of recycled polymers is an advantage for incoming goods inspection. In the shortest possible time, the basic polymer as well as problems can be identified. The increasing interest in recycling of materials is of course related to costs. Natural resources can be saved when recycling-based materials are used instead.

In comparison: untreated and recycled polymers

What happens during the recycling process? Polymers such as ABS are mixed from various sources and returned to the market as pure-grade material. These materials are, for instance, available as granules and are termed as regranulates. Quality assurance should highlight the differences between such mixtures. The present application compares an untreated polymer with a treated one, using an example of pure and recycled ABS.

ABS, a terpolymer, is often used in the automotive industry as a material for casings for light sources, cooler grilles or hubcaps. The advantage of this material is that it can easily be galvanized. Since years, mirrors and reflectors have no longer been manufactured from metal.

The terpolymer ABS consists of acryl nitrile, 1,3-butadiene and styrene. FTIR spectrometry combined with single-reflectance measurements offers a fast, reliable and non-destructive analysis of this material. In the present example, a diamond-based ATR accessory was used for single-reflectance. The polymer sample, in the form of a granulate, was pressed with reproducible pressure onto the measuring window. Single-reflectance from the IR-beam was already sufficient to obtain a result.

A look at the spectra

To interpret the ABS spectrum, the spectra of three individual polymers can be used to reveal differences. The acryl nitrile spectrum, for instance, exhibits a characteristic band at 2237 cm-1 (nitrile band). 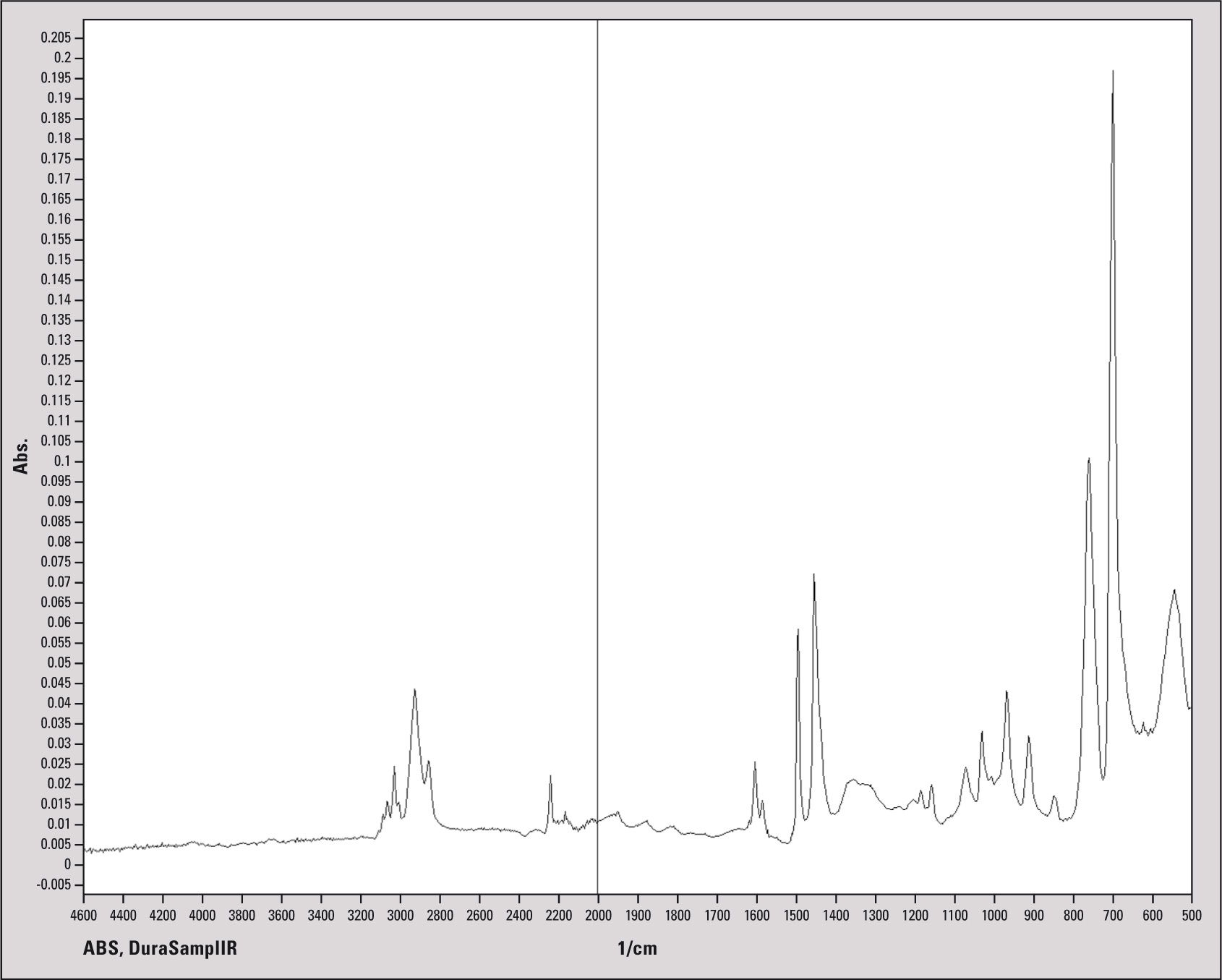 The ABS spectrum exhibits all typical characteristics of styrene, acryl nitrile and butadiene. At 975 cm-1, the spectrum features a peak which can be attributed to the butadiene group. The basic structure of the spectrum can be traced to styrene and the nitrile bands are exhibited at 2237 cm-1.

The ABS-typical spectrum is shown in figure 1.

In the spectrum of recycled ABS the following structures could be identified: polybromated diphenyl ether at 1725 cm-1, brominated flame retardant, polycarbonate with its typical triple bands at 1200 cm-1, 1,3-butadiene at 975 cm-1 and the nitrile structure of acryl nitrile at 2237 cm-1.

The spectrum of the recycled polymer exhibits the pattern of a mixed spectrum: it is not pure. However, this is not necessarily a disadvantage. In the present example, the polymer was an admixture with polycarbonate (PC), used to harden polymers. Each of the functional groups influences the physics of the polymer and this is specifically used in the manufacturing of component parts. Additional distinctive features in the spectrum still need to be clarified. This requires further analysis steps using pyrolysis-GCMS and element analysis using EDX, AAS or ICP as already reported in the Shimadzu News and various application notes. 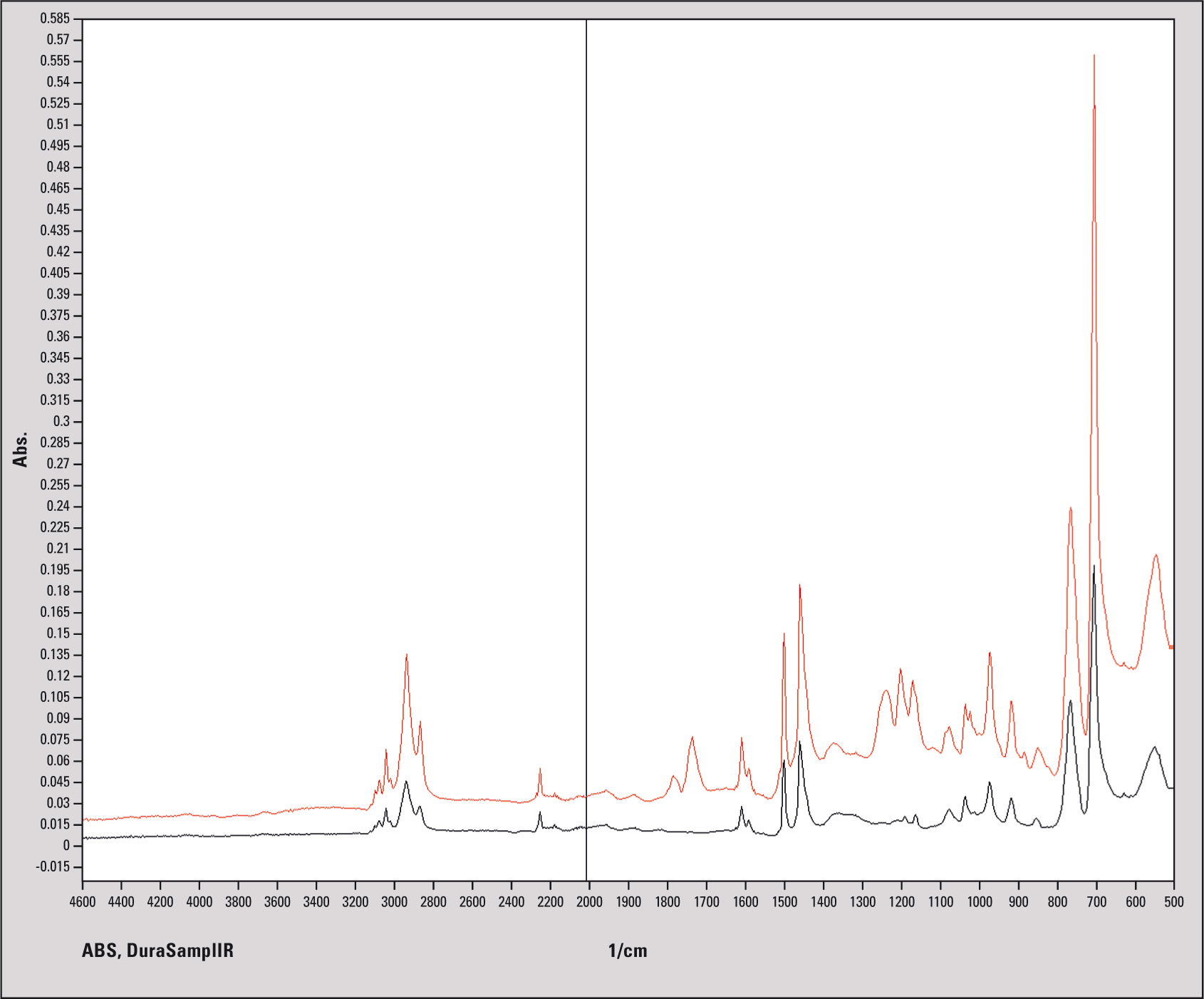 “The Commission calls for action on commodities and raw materials”, IP/11/122, Brussels, 2 February 2011
“Directive on the restriction of the use of certain hazardous substances in electrical and electronic equipment”, RoHS 2008/385/EC
Shimadzu News 2005 and 2006, www.shimadzu.eu, Application Information

Albert van Oyen of CARAT GmbH in Bocholt, Germany is gratefully acknowledged for his kind support of this topic.