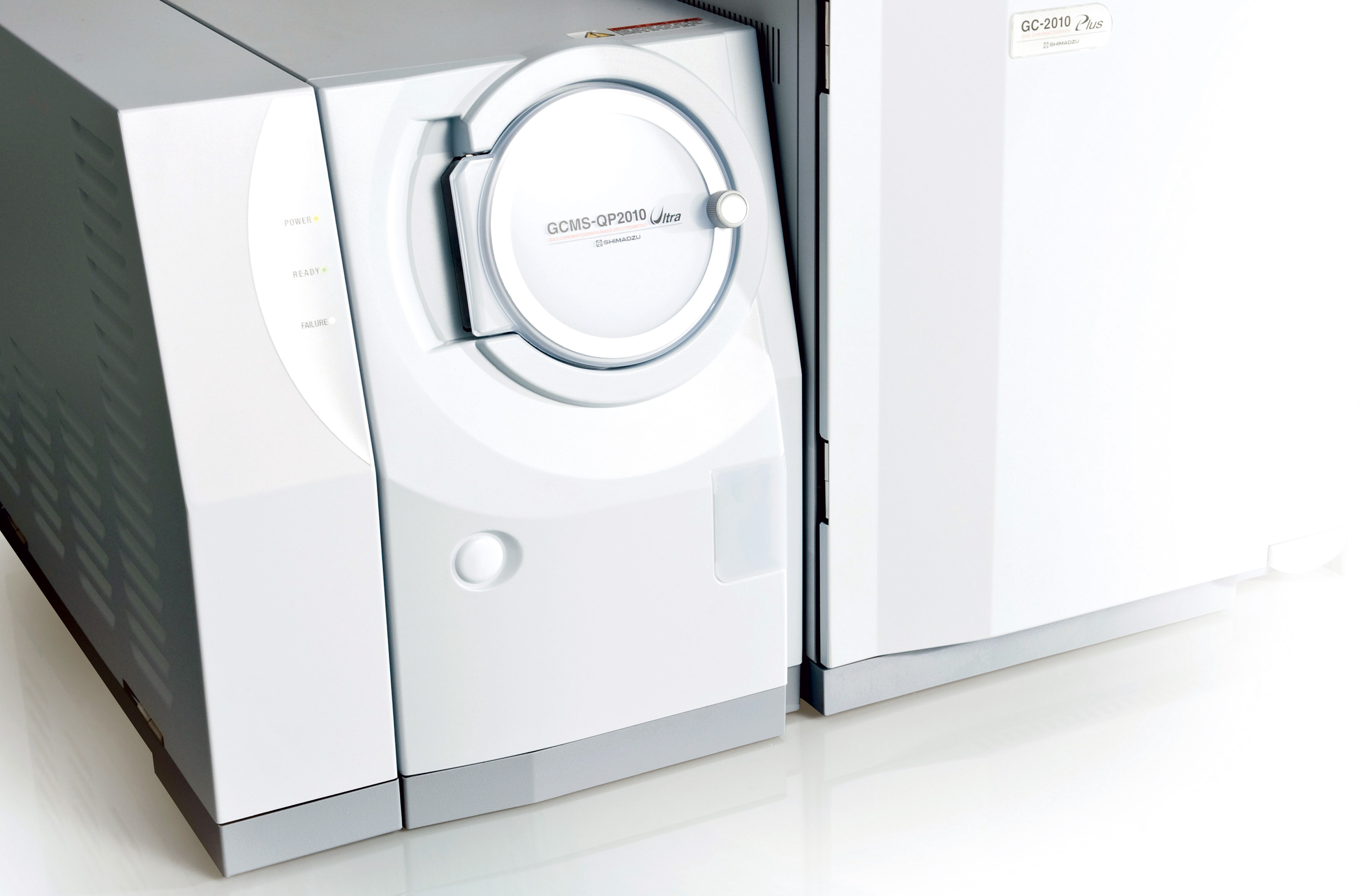 The current draft for amendments to the German Feed Regulation (Futtermittelverordnung, FMV) calls for additional requirements of dioxin and PCB (polychlorinated biphenyls) monitoring, such as individual detection of all 17 polychlorinated dibenzo-p-dioxins and dibenzofuranes (PCDD/F). Sample throughput and the demand for cost-effective dioxin and PCB analyses will increase significantly. Will these maximum value analyses always require the use of high-resolution mass spectrometry (HRMS) or is low-resolution mass spectrometry (single quadrupole MS) suitable?

Methods for the official control of foods and animal feed are specified in the Commission Regulation (EC) No 1883/2006 Annex II [1]. It lists the requirements of GC/MS screening processes – single quadrupole MS, ion trap MS or triple quadrupole MS – for high sample throughput as well as GC/HRMS as a confirmatory method for reconfirming positive results when maximum values are exceeded.

The text, however, does not clearly state in which case the result of a screening method should be reconfirmed using HRMS. Paragraph 7.2 in Annex II, for instance states: “Positive results have always to be confirmed by a confirmatory method of analysis (HRGC/HRMS).” This means in consequence, that results from GC/MS screening which exceed the maximum value by only 50 % meet the requirements. Also the wording: “Screening results with concentrations at significant levels” (paragraph 1, Annex II) that should be confirmed via HRMS, is vague on the level at which this should occur. The original English text states “significant levels.” This could refer to residues that significantly stand out from the overall background pollution, which starts at a median value of 0.03 pg/g [2] from a result of > 0.05 pg/g PCDD/F (toxicity equivalent) TEQ. Or are “significant levels” close to the maximum value?

The same paragraph of the regulation, however, also states that screening methods “in order to select those samples with levels of dioxins and dioxin-like PCBs that are less than 25 % below or exceed the maximum level” are sufficient. For an animal feed with a maximum value of 0.75 pg/g [3] the screening method is therefore legally valid up to a measuring result of 0.19 pg/g. When including the dioxin-like PCBs (WHO-PCBs), the total maximum value is 1.25 pg/g PCDD/F-PCB-TEQ. The sensitivity in the GC/MS screening method must therefore, according to the 25 % level, attain a detection limit of at least 0.19 pg/g PCB-TEQ.

This detection limit can be calculated from the sum of the individual results for 17 PCDD/F and 12 PCBs, whereby the toxicity equivalent factors (TEF) of the individual substances to 2,3,7,8-tetrachlorodibenzodioxin (TCDD) are also included in the quantification. Analytes exhibiting high TEF should therefore be detected at a detection limit of at least 0.05 pg/g. For the OCDD or other less toxic PCBs, 1 pg/g up to 20 pg/g will be sufficient (Table 1). 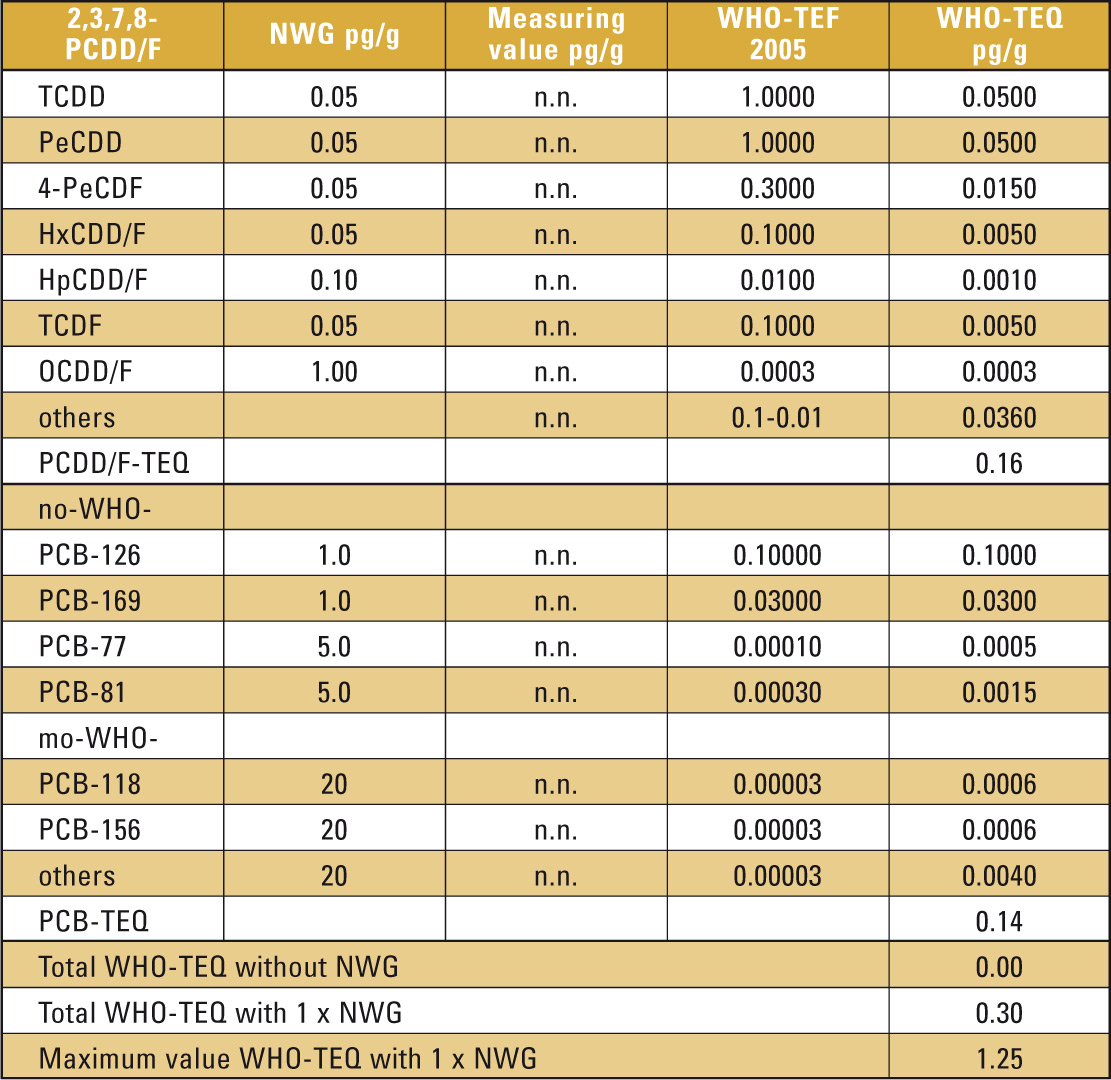 Table 1: Results for dioxin and WHO-PCBs (abridged) for a nondescript grain raw material. Required detection limit according to the 25 % criterion (EC No. 1883/2006 Annex II).

For a sample weight of 20 g and enrichment of the TCDD in 20 µL toluene, a 5 µL injection volume (Figure 1) of 0.05 pg TCDD is measured at a S/N ratio of 3:1. State-of-the-art generation GC/MS instruments, for instance Shimadzu’s GCMS-QP2010 Plus, can easily achieve this in matrix-free calibration solutions. The extent to which this detection limit can also be attained in an animal feed matrix depends on the purity of the extracts as well as on the MS-selectivity of the analytes. The latter is, in addition to the 10-fold higher sensitivity, the power of HRMS.

Focusing the detector on the exact mass of TCDD of m = 321.894 u at a peak width at half height w1/2 = 0.03, masks matrix components with few chlorine atoms or molecules lacking chlorine atoms, even when these possess a similar mass of, for instance, m = 322.23 u. The high specificity that can be attained with a mass resolution of R ≈ 10,000 (for R see Figure 2) makes HRMS indispensable for analyses involving complex matrices.

For simple monitoring of maximum values in accordance with EC regulations – and more cannot be imposed on the food industry – GC/MS screening methods for animal feeds offer clear cost advantages, for instance due to the minimum use of consumables. Upstream degradation of fats via precipitation in concentrated sulfuric acid (H2SO4), as well as the final separation of fats using miniaturized GPC are essential additional steps in matrix removal with respect to sample preparation using an AutoprepTM (Fluid Management Systems)[4]. The final extracts obtained this way exhibit very high purity levels and ensure long service lifetime of the single quadrupole MS system.

The requirements defined in EC 1883/2006 Annex II on the quality of HRMS measurements can also be met without exception by a single quadrupole MS instrument. The determination limits of < 20 % of the maximum value as required in the confirmatory method are, due to the higher sample weights, also feasible in routine analyses, despite the lower sensitivity in favor of increased specificity, which should be especially important for screening purposes.

The MS was operated with decreased peak width in the tuning that gives an approximately 2-fold resolution of R ≈ 2000. For this reason, the cross-sensitivity for co-eluting matrix components is noticeably less than the usual resolution of R ≈ 1000, as shown in figure 2 using the example of decachlorobiphenyl (PCB209). With a value R = u/dm [5], this peak exhibits a resolution of R > 1660. According to the 10 %-definition of resolution, another peak with an intensity of 10 % of the peak maximum can still be present at an interval dm = 0.3 u from the mass m = 497.7. To show the current resolution in figure 2, the strongest ion with the exact mass of 497.7 u is drawn on mass 497.7 u and at intervals dm = 0.3 u, also on 497.4 and 498.0. These additional masses do not really exist but reveal themselves as masses 497.68 u, which have deviated from the original flight path. The higher the signals for these ions flying next to the exact flight path of 497.68, the lower the actual resolution. 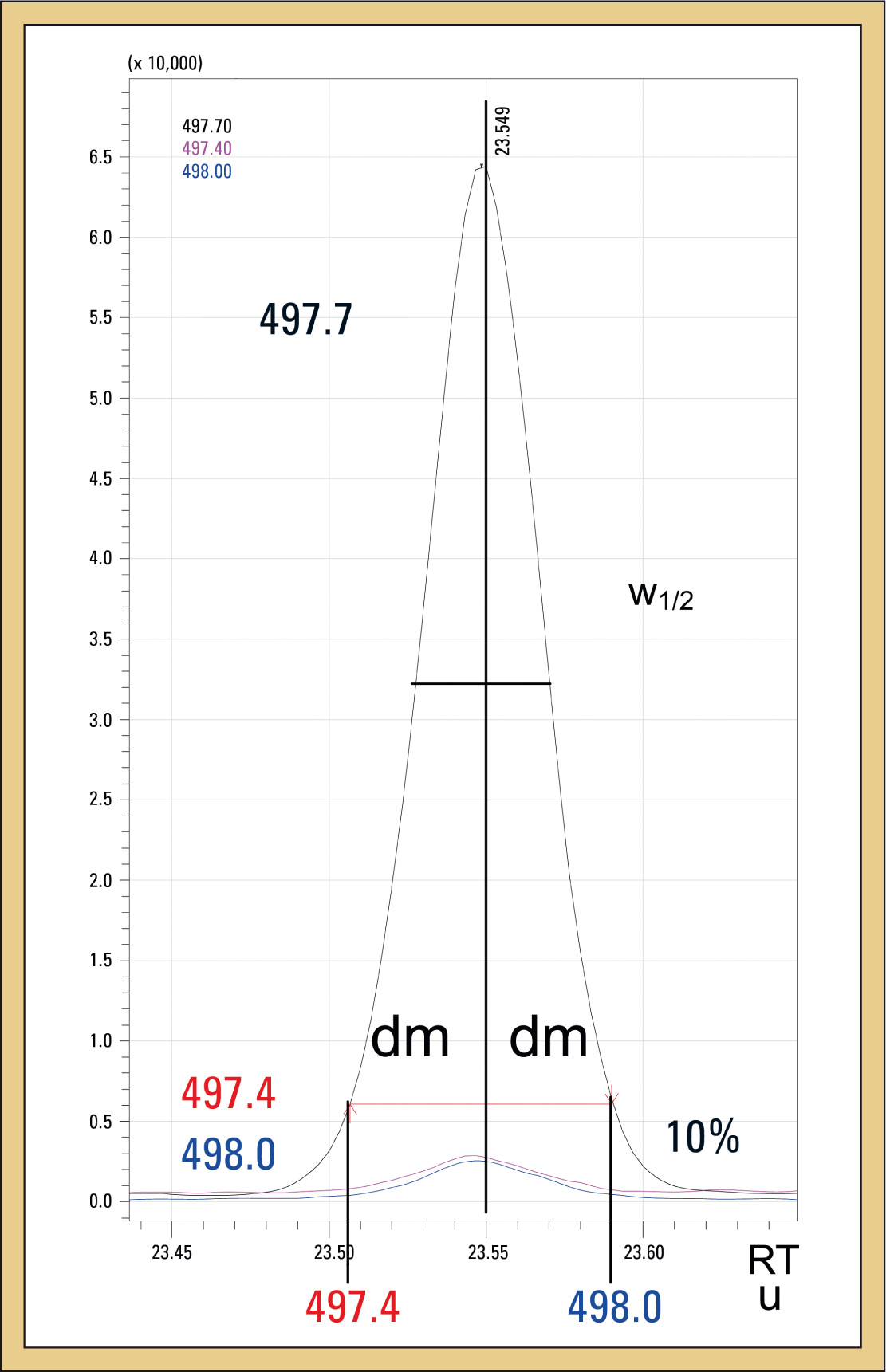 In fact, the peak height in figure 2 for 498.0 u (blue line) only amounts to approximately 4 % of the maximum, which lies exactly on the target mass 497.7 u. A neighboring, now real existing interfering ion of mass 498.0, exhibiting the same intensity as the target ion 497.7 u, would increase the measuring signal for the target ion 497.7 by only 4 %. 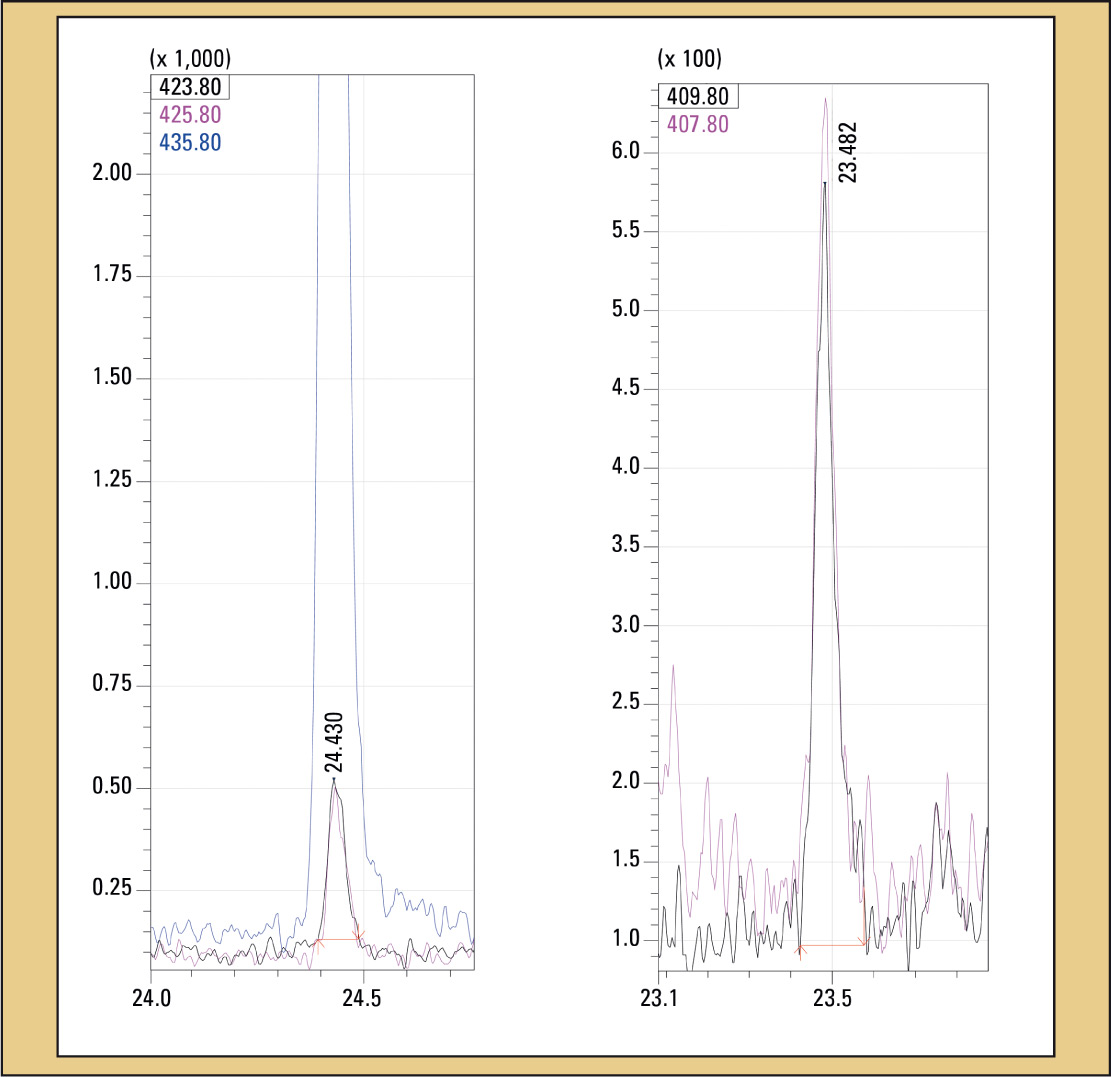 Figure 3: Maize sample prepared according to the sample preparation procedure in Figure 1; blue: 13C standard; red and black: target ions for HpCDD with 0.08 pg/g (left) and HpCDF with 0.05 pg/g.

A simple MS system, generally offering only a nominal resolution, can prove to be sufficiently robust and sensitive for routine operation with a resolution of R ≈ 2000. A further increase in R will be limited by quadrupole technology. At a mass accuracy of effectively only 0.1 u, separation intervals of less than 0.1 u make no sense. In addition, the trueness of mass calibration, which responds very sensitively to temperature fluctuations, must be guaranteed for each injection.

The use of a single quadrupole MS for monitoring maximum values of dioxins and PCBs is entirely in accordance with EC No. 1883/2006 as long as the 25 % maximum value is observed. This applies in more than 99 % of routine analyses. Newer single quadrupole MS instruments attain the required sensitivity. Optimized matrix removal and robust operation at an increased resolution of R ≈ 2000 improves specificity and, therefore, provides an alternative for HRMS.