π-conjugated oligomers of defined length have steadily been gaining attention in recent years. They not only serve as models for the corresponding polymers, but are interesting substances on their own, for instance for electro-optical applications [1]. In principle, defined oligomers are free of defects and can be produced in very high purities via chromatographic techniques. Aside from its fundamental importance for direct applications, purity is also crucial for the understanding of complex processes in electronic components [2].

One approach towards defined oligomers is their targeted synthesis. In this case, the oligomer is built stepwise from the corresponding monomers via suitable protective group techniques and coupling reactions. When the reactions proceed smoothly, useful amounts of a defined oligomer can be produced on a preparative scale and further converted to higher oligomers in subsequent reactions.

Stepwise synthesis has been the method of choice for a multitude of conjugated systems. However, this approach can be very timeconsuming and cost-intensive. One evident alternative is polymerization (limited in turnover) with subsequent separation of the resulting oligomer or polymer mixture.

The yield of a specific oligomer produced this way is rather low, and the scope for multi-step consecutive reactions is limited. The charm of this approach, however, lies in the fact that an entire oligomer series becomes available within a single, straightforward reaction step. The separated series of oligomers permits the investigation of chain-length related questions (optical properties, thermal characteristics, elution volumes, etc.). In addition, it is possible to extrapolate the behavior of the ideal, defect-free polymer from the structure-property relationships of polymer homologous series. In principle, the separation of oligomers from a polymerization reaction mixture can be carried out via gel-permeation chromatography (GPC).

However, as the oligomer peaks are seldom baseline-separated even when several chromatographic columns are used in series, fractionation is associated with a considerable loss of material. With each additional column in line the backpressure increases. So there are limits to spreading the separation distance (the back-pressure increases linearly with column length, while the resolution scales by the square root of the column length).

A simple and elegant solution to this dilemma is the so-called recycling-GPC (recGPC) method. In this approach, the sample passes repeatedly through the same column combination, so the effective column length increases whereas the working pressure remains constant [3, 4]. Despite the simplicity of the system and the great successes attained with this method in recent years, it is not very widely used.

Two applications are briefly presented here, where the use of recycling-GPC considerably facilitated the task or has made it worth tackling at all. Figure 1 shows the instrument configuration used. 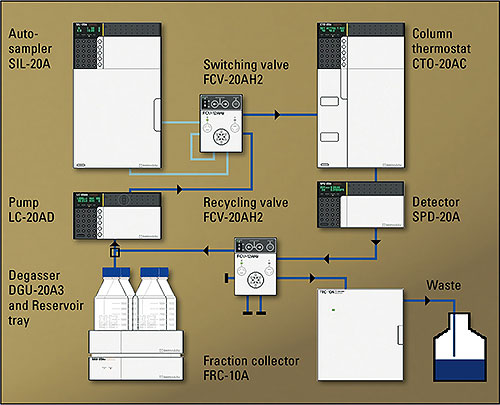 A set-up of three preparative columns was used for separation (103 Å, 5 μ, 20 mm x 300 mm, PSS, Mainz, Germany), with THF (tetrahydrofurane) as the eluent. In the applications discussed here, between 10 and 25 mg of a substance mixture was applied per injection. The separated fractions were concentrated using a rotary evaporator and the products were precipitated by addition of methanol. In order to remove the last traces of the THF stabilizer (BHT), precipitation was repeated. Analysis of the reaction products as well as the pure fractions were carried out, depending on the sample, via analytical methods such as GPC (PS calibration), NMR spectroscopy, mass spectrometry or UV/VIS and fluorescence spectroscopy.

Phenylene-butadiynylene oligomers 1 were obtained through oxidative Glaser-coupling of the corresponding bisacetylene. Figure 2 shows the structure of the oligomers and the elution diagram of the oligomer mixture obtained during the polymerization. Since GPC is a relative method, a direct conclusion on the actual degree of polymerization is not possible. The peak assignment in the elugram was therefore carried out via comparison of the elution volume with a multi-step synthesized tetramer (n = 4).

Figure 3 shows how the elugrams of the individual runs develop in the recycling process. After each cycle, two oligomers could be separated and after a little more than three hours the defined oligomers up to 17-mer were available in purified form. The amounts obtained in this separation may be small, but they allow the calibration of an analytical GPC and even an extrapolation of the molecular mass over-estimation to high molecular masses resulting from the PS calibration. In this way, the actual molecular masses and polydispersities for these polymers could be determined. Similarly, it was possible to make predictions on the development of the optical characteristics with increasing molar mass [5].

recGPC is also highly suitable for preparative purification purposes. For some time, we have been involved in the synthesis and characterization of two-dimensional rigid organic structures with lateral dimensions of more than 5 nm. Such compounds are not only important for fundamental research but they can also help to improve our understanding of composite materials in general.

Figure 4: Structural formula of the molecular spoked wheel 2 (Ø = 8 nm). 2 could be purified via preparative recGPC during the last step (Figure 5). 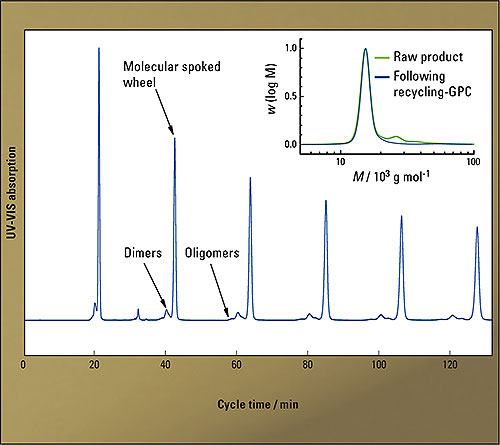 In the intramolecular cyclization of an open precursor molecule to the molecular spoked wheel 2, the formation of small amounts of dimers and oligomers could not be avoided even under optimized reaction conditions [6]. In this case, separation using conventional GPC should indeed be possible. However, due to loss of material inherent in heart-cutting of the non-baseline separated peaks, this cannot be acceptable in view of the multi-step precursor synthesis. Using recGPC, in contrast, 25 mg of the nanoscale spoked wheel could be obtained in pure form within one separation run (six cycles), yielding an amount large enough to carry out subsequent research on these compounds.

recGPC is an extremely valuable method for the isolation of substances from reaction mixtures that are difficult to separate, whereby analytical as well as preparative separations are possible. In this way, syntheses which were previously not considered due to expected separation problems have become feasible. In addition, recGPC is a very useful complementary method for purity determination, since many impurities take several cycles to clearly separate from the main product. This technique is not restricted to GPC but can also be applied to other liquid chromatographic methods (for instance reversed-phase).