Simple and accurate determination of composition and odor intensity

Fragrance analysis very often deals with complex mixtures requiring sophisticated methods to chromatographically separate all sample components. Offline and online multidimensional separations are available to analyze these types of samples. However, offline preseparations often have disadvantages, such as long analysis times, difficulties regarding quantitative recovery rates or the occurrence of artifacts. In order to overcome these problems, automated preseparation methods were developed in recent years and have reached new heights with Shimadzu’s multidimensional MDGC-2010 system. Widespread disadvantages of multidimensional online pre-separation have been overcome using novel developments of the switching mechanism as well as its associated software control.

Accurate transfer of non-separated regions with just one reference run

Multidimensional chromatography couples two analytical columns whereby the first column serves as the pre-column from which components that have not been separated can be selectively transferred onto the second column. This ‘cutting’ of non-separated regions, also known as ‘heart-cutting’, is effected by taking advantage of the pressure difference between the outlet of the first column and the inlet of the second column. This pressure difference is built up via a controlled valve with restrictors so that the outlet pressure of the first column does not change. This offers enormous advantages and distinguishes itself from the conventional ‘Deans Switch’ mechanism. The retention times of the chromatogram in the first dimension remain stable, independently of how many regions are to be transferred onto the column of the second dimension. This outstanding retention time stability enables identification of the nonseparated regions with just one reference run (the sample is only separated on column 1). With only one subsequent analytical run, multiple regions can now be transferred onto the second column.

In fragrance analysis, determination of the physical detector signal is highly significant, as is also the odor intensity of the sample components. To enable odor intensity determination, an olfactometer can be included as an additional MDGC system component whereby the human nose takes on the perception of odor. The olfactometer used in the present example was the ‘Phaser’ (Atas GL), featuring exceptionally good temperature homogeneity which also enables ‘sniffing’ of high-boiling components. Suitable software allows evaluation of fragrance components and superimposing of the TIC (total ion current) and sniffer chromatograms. Here the olfactometer was positioned at the outlet of the second column as a second detector used in addition to the mass spectrometer (see figure 1). 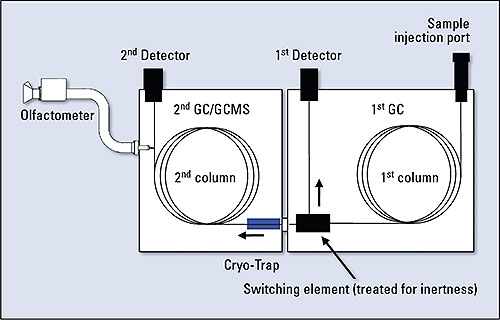 The appropriate split ratio between mass spectrometer and olfactometer can be adjusted through targeted selection of restrictors as well as pressure. The split ratio is calculated via the SplitManager software. For the present analysis, the split ratio was set to 1: 3 (see figure 2). 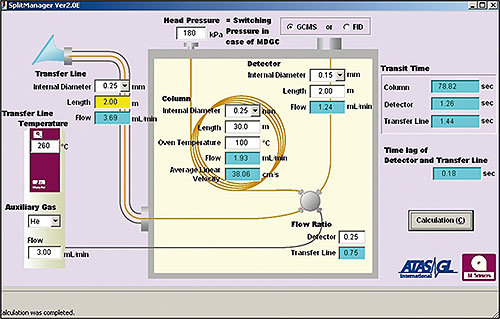 Figure 2: SplitManager software for the calculation of split ratios

A cold trap at the inlet of column two can be used for additional pre-concentration of the fragrance components which are generally present in trace concentrations, via multiple injections and targeted transfer onto the second column. A mandarin orange oil sample exhibits incomplete separation in the first dimension. Figure 3 shows the reference chromatogram (without transfer onto the second column) compared with the chromatogram including a ‘heart-cut.’ This clearly illustrates the retention stability of the system. 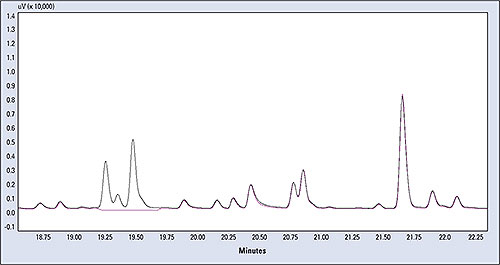 The selected oven start temperature in the first dimension was 60 °C for 1 min. The heating rate was 10 °C/min up to 250 °C for 15 min. The oven start temperature in the second dimension was set to 50 °C for 6 min with a heating rate of 10 °C/min up to 280 °C. After separation in the second dimension, 10 sample components could be identified and the olfactometer provided further information on the odor and intensity of these components. The precise operating principle of the ‘Multi-Deans Switch’ enabled quantitative evaluation in both dimensions.

Shimadzu’s multidimensional system in combination with the olfactometer and the cryotrap from Atas GL enables acquisition of comprehensive information on complex mixtures. Investigation of fragrance components is only one example of the broad application range of this system.

Figure 4: Qualitative evaluation of the transferred substances in the second dimension