Counting down the days

RoHS II – screening of phthalates in electrical and electronic equipment 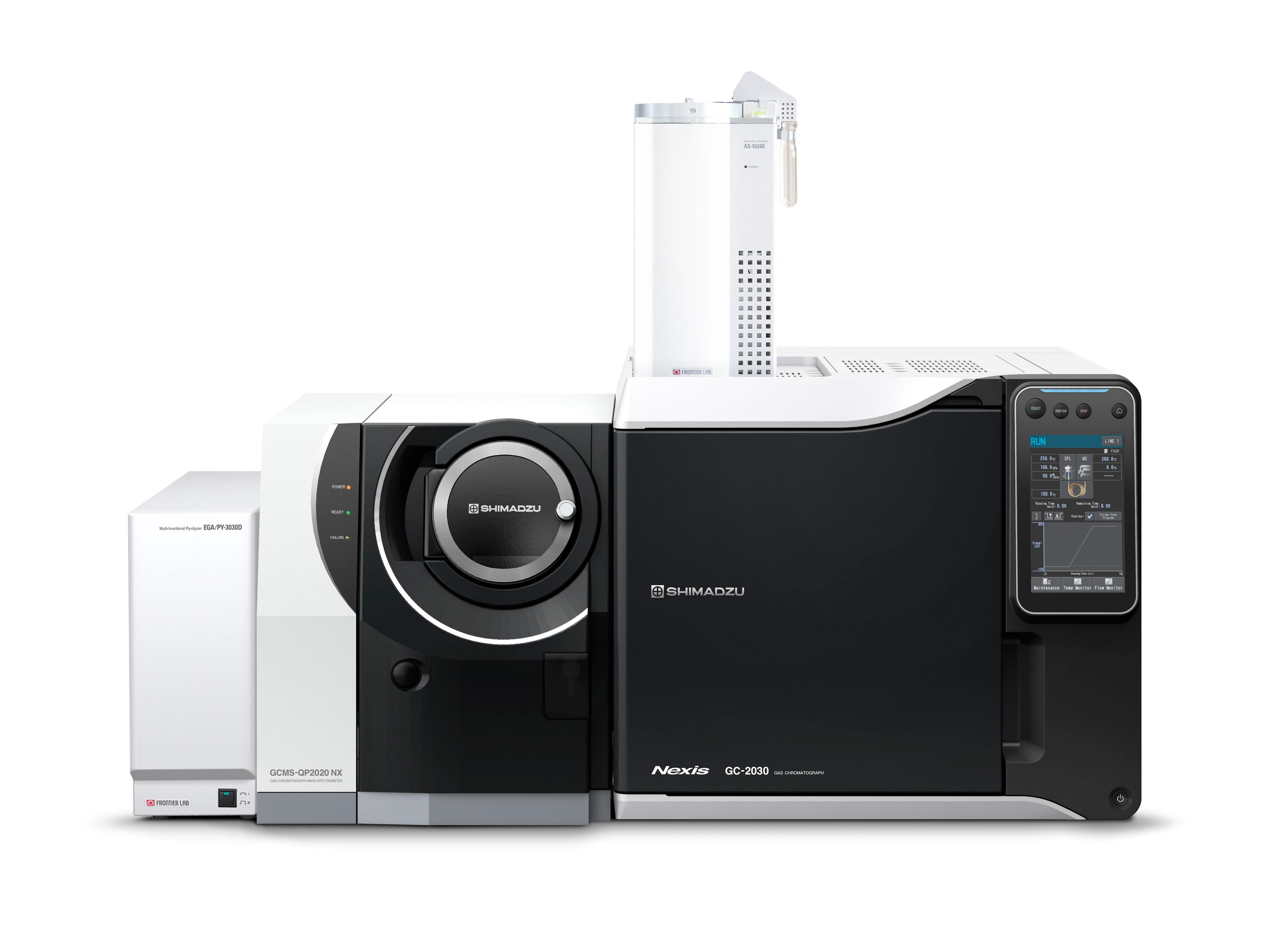 On 22nd of July 2019, the EU RoHS II directive will come into effect. The transition period will then be over and limit values for four phthalic acid esters in electrical and electronic equipment must be adhered to.

Some phthalic acid esters, known as phthalates, have been banned in Europe since years due to their potential health risks. Since 2009, limit values have been applied to the content of certain phthalates in toys and baby products which can be hazardous when put into children’s mouths. The list of products for which phthalate concentration is regulated by law is expanding constantly. It covers cosmetics, plastics for food packaging and soon also electrical and electronic equipment.

Time and again, some phthalates make headline news as substances hazardous to health. Low molecular phthalates such as di-(2-ethylhexyl)-phthalate (DEHP), dibutyl phthalate (DBP), benzyl butyl phthalate (BBP) and diisobutyl phthalate (DIBP) are especially suspected of having an endocrinological (hormone-like) effect. Endocrine disruptors affect hormonal balance and can cause health disorders in sufficiently high concentrations. The effect of substances that interfere with the sex hormone system and impair reproductive ability is currently the subject of heated debate.

DEHP, BBP, DBP and DIBP in the RoHS II Directive

The compounds listed above (DEHP, BBP, DBP and DIBP) have therefore been included in the EU REACH chemicals regulation. Since February 21 2015, they may only be produced and used with a special exemption that is difficult to obtain. Additionally, the European Commission has decided to restrict the four phthalates with the RoHS II Directive (Directive on the restriction of the use of certain hazardous substanc­es in electrical and electronic equipment).

The RoHS II Directive specifies a maximum permissible concentration of 0.1 mass percent (i.e. a maximum of 1,000 mg/kg) per substance. The planned transition period expires for most device groups on 07/22/2019. Medical devices as well as control and measuring instruments have a longer period until 2021.

Phthalates are still used worldwide as plasticizers, especially in plastics such as PVC, nitrocellulose or synthetic rubber. Accord­ing to current EU legislation, manufacturers of electrical and electronic equipment are now obliged to ensure that their equipment complies with RoHS. The manufacturers must therefore ensure that the content of the four regulated phthalates is lower than the limit of 1,000 mg/kg. In particular, companies that process supplied products must rely on the supplier or check for themselves.

The IEC 62321 international test standards provide methods enabling the electrical industry to determine the concentration of certain regulated substances in electrical products on a globally uniform basis. Part 8 of this standard (IEC 62321-8:2017) describes the method for determination of “phthalates in polymers by gas chromatography mass spectrometry (GC-MS) and gas chromatography mass spectrometry using the addition of pyrolysis/thermal desorption (Py/TD-GC-MS).“ The Py-Screener described here was specially developed as a screening method to determine phthalates in polymers and is fully compliant with Part 8 of the IEC 62321 standard.

A major advantage of this screening method: it needs very little sample preparation, and the complete method package allows polymer samples to be analyzed quickly without the necessity for extra method development. Classical methods of analyzing and quantifying phthalates are based on complex sample preparation. In this case, extraction of the samples occurs using a solvent over several hours, with subsequent GC-MS analysis.

The Py-Screener is based on a coupled pyrolysis GC-MS. For measurement, a small piece of the polymer sample (approx. 0.5 mg) is placed in a stainless steel cup and entered in the preheated pyrolysis furnace using an auto­sampler. The semi-volatile phthalates are extracted from the polymer using a special temperature program. Gaseous phthalates are transported with a helium carrier gas stream into the gas chromatograph, separated on the analytical column and then identified and quantified with the mass spectro­meter.

The method package of the Py-Screener supports users right from the beginning with a detailed manual describing each step. Sample preparation of standards and poly­mer samples can even be followed via a video tutorial. Depending on the shape, the sample is punched out or cut with the tools from the toolkit (figure 2) and then weighed for quantification. Method and instrument parameters are already optimized for the analysis of phthalates; batch tables for sampler and instrument software only have to be filled in. 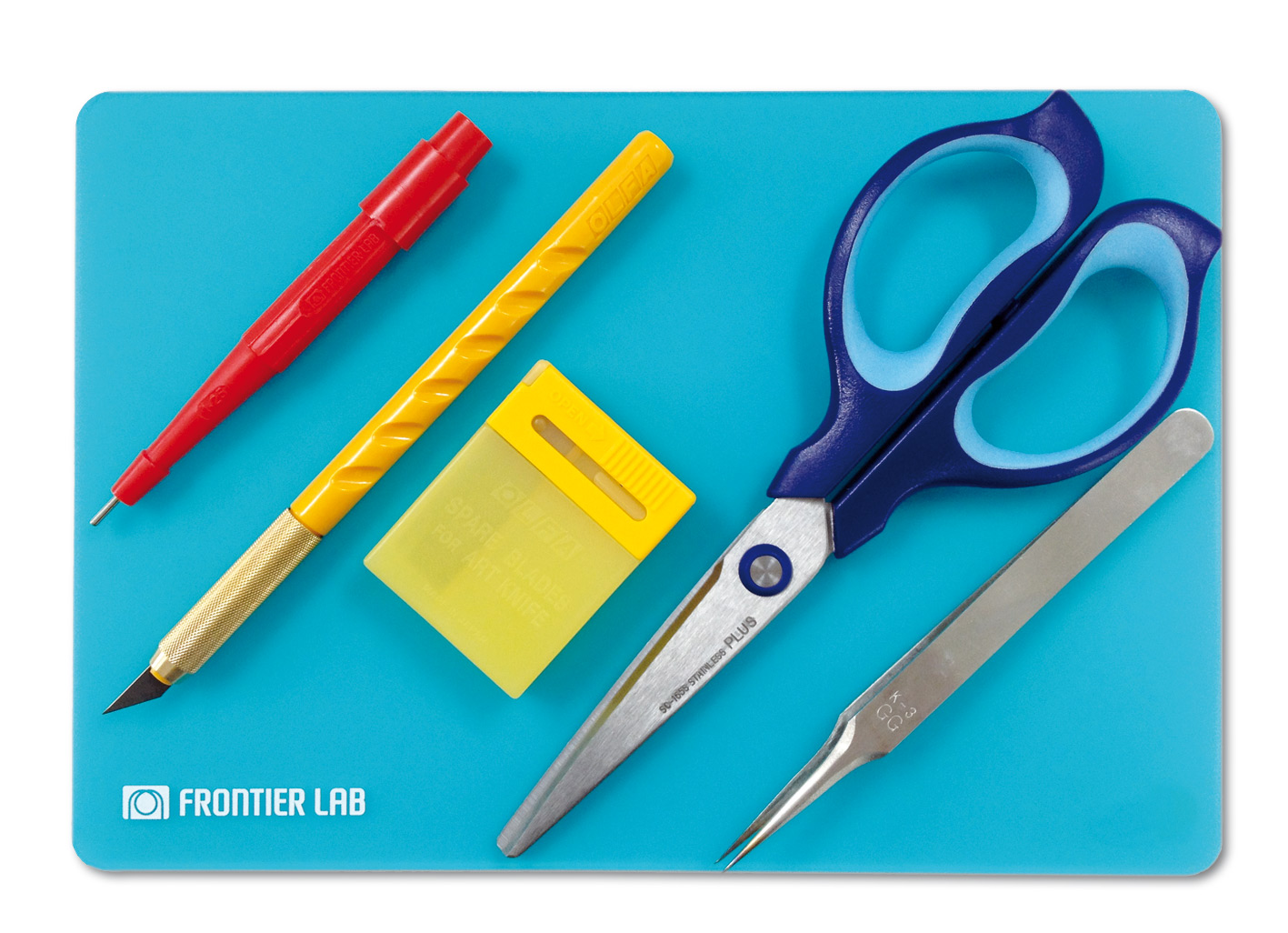 Calibration and quantification parameters are already part of the method, including QA/QC controls to check sensitivity of the system and column performance. With the unique AART function (Automatic Adjustment of Reten­tion Time) of the GCMSsolution software and a simple alkane standard, retention times of the quantification table can be adapted easily and quickly to a new column or, after maintenance work, to the shortened column.

Measurements are evaluated in the LabSolution Insight software, which was developed specially for processing large sample quantities. Data is presented clearly in tabular and graphical form, and the quantification results are color-coded with so-called flags (figure 3). This allows users to see with a glance whether the concentration of a polymer sample is harmless or far above the limit value. In both cases, the sample requires no further analysis. 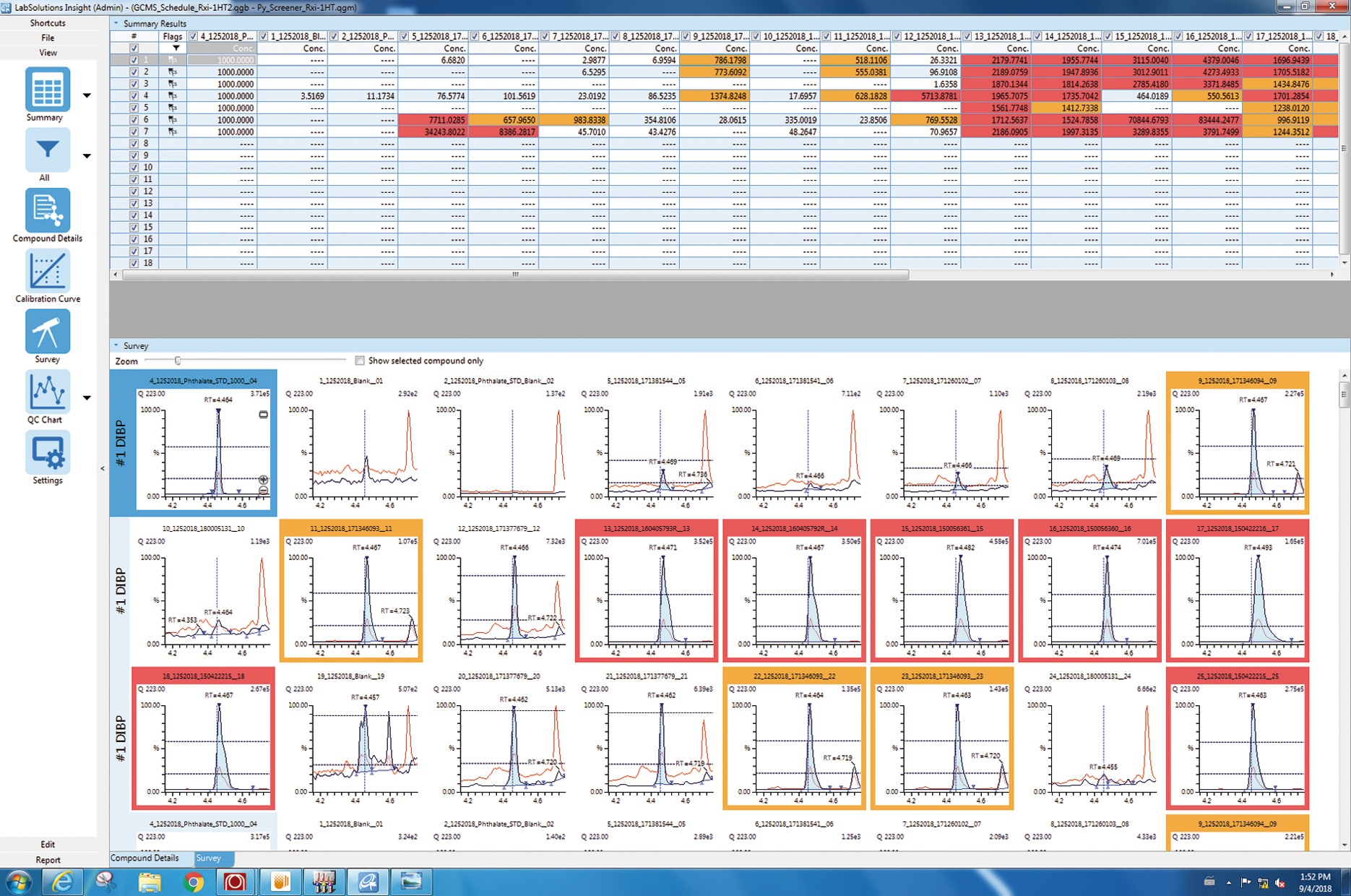 However, if the phthalate concentration determined by the screening method is within the range of the limit value (500-1,500 mg/kg), a second, more precise quantification should be carried out to deter­mine the exact concentration. One possibility is the classical GC-MS method with prior extraction of the sample and subsequent liquid injection.

Shimadzu’s Twin Line MS System is an ideal solution. It is equipped with an additional liquid injector, an autosampler (AOC-20i) and a second capillary column. With a special kit, both columns can be installed simultaneously in the mass spectrometer as the powerful turbomolecular pump of the GCMS-QP2020NX allows a column flow of up to 15 mL/sec. With this system, ei­ther polymer samples can be screened or extract­ed liquid samples can be quantified exactly with­out further modification of the GC-MS. 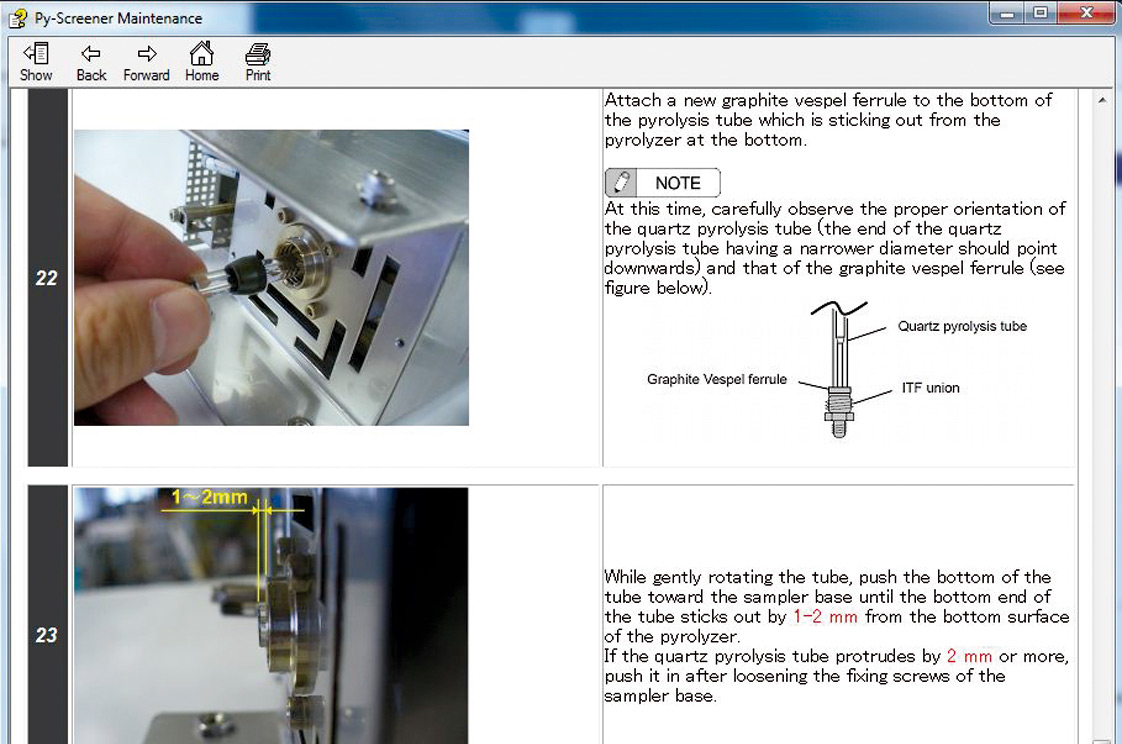 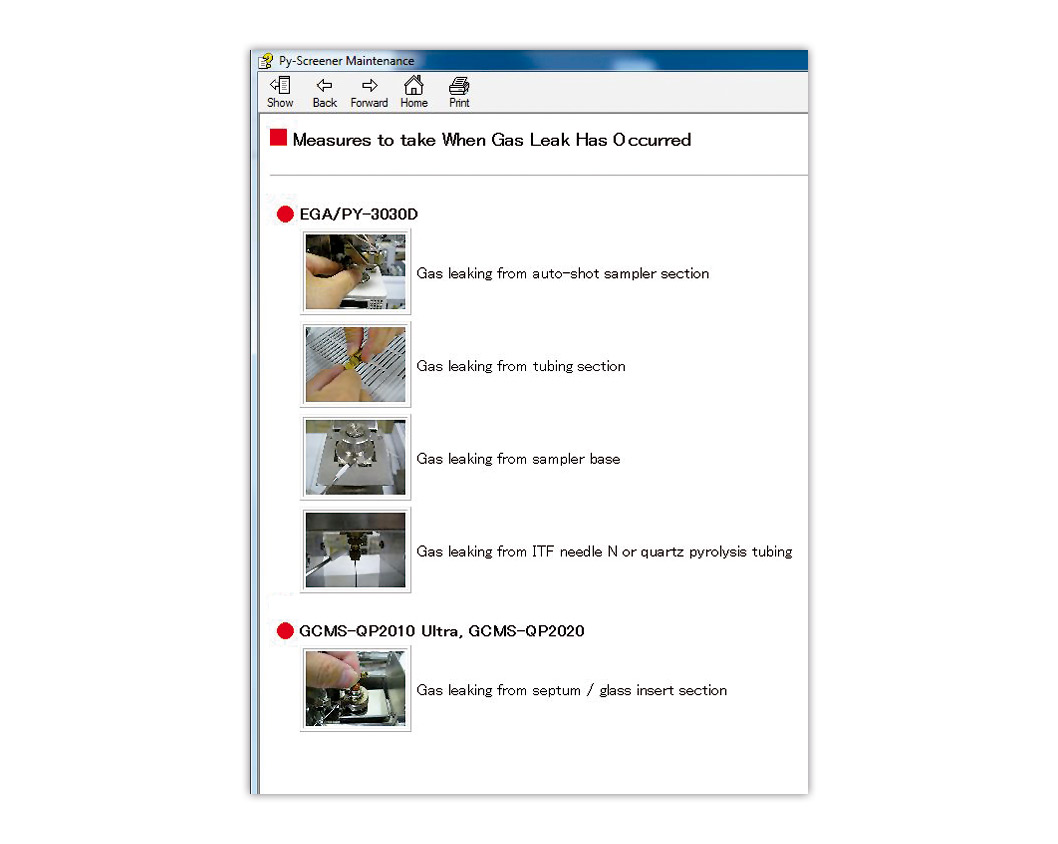 Figures 4a and 4b: Examples from the Maintenance Navigator

The all-round package also includes a “Maintenance Navi­gator“ which supports users with detailed descriptions and clear step-by-step illustrations for regular maintenance work, such as replacing the pyrolysis or injector liner. If a leak occurs in the system, the “Maintenance Navigator“ provides valuable information for systematic troubleshooting (figures 4a and 4b).

In addition to limit values for some heavy metals, the RoHS I Directive already prescribes a maximum concentration for the organic compounds PBB (polybrominated biphenyls) and PBDE (polybrominated diphenyl ethers) used as flame retardants. These compounds are also GC-MS compatible and can be analyzed with the Py-Screener system. The optimized methods are already part of the package and can be used directly if required.

The “Py-Screener“ screening system is a comprehensive package for the analysis of phthalic acid esters in electrical products and is compliant with Part 8 of the IEC 62321 standard. The package contains optimized method and instrument parameters, ready-made sequences for pyrolyzer and GC-MS software, a toolkit for sample preparation and special evaluation software. This makes quantification of phthalates easy to learn, even for new users. As a screening method, the Py-Screener saves both solvent consumption when compared to classical methods, and time, since many polymer samples can already be ex­cluded from further analysis after the first measurement.

Literature
[1] Official Journal of the European Union 6/4/2015.
[2] Commission Delegated Directive (EU) 2015/836 of 31st of March, 2015, directive of the European Parliament and of the Council amending Annex II to Directive 2011/65/EU as regards the list of substances subject to restrictions.