For reactive substances, inert LC columns are essential for a symmetrical peak shape

In any chromatographic separation, symmetrical peaks with an ideal Gaussian shape are preferable. Under standard conditions, this can usually be accomplished in case of neutral substanc­es. However, the examination of strongly acidic, basic or chelating compounds often leads to so-called “peak tailing“ and thus to a clearly asymmetric peak shape. In these cases, the right choice of column is crucial: it should be as inert as possible for ionizable analytes in order to avoid undesired secondary interactions with the stationary phase.

The inertness of a column

What exactly is meant by “inertness“ of a column? Generally speaking, inertness means that as few undesirable interactions as possible take place between the column and the analyte.

When the three substance properties, acidic, basic and chelating have an asymmetric peak form (i.e. with undesirable interactions), it suggests that acidic substances show an insufficiently chemically bound phase or impurities that are contained in the phase and react with acidic substances. An insufficiently chemically bound phase con­tains free silanol groups. Unpro­tonated acids can compete with protons of protonated silanol groups. This generates asymmetrical peaks. Contaminants in the stationary phase that can trigger hydrogen bonds, or are basic, can interact with acidic analytes and lead to asymmetric peaks.

Positively charged basic analytes may interact with remaining slightly acidic silanol groups on the stationary phase if they have a negative charge. “Endcapping“, i.e. the blocking of accessible silanol groups by trimethylsilyl ligands, is carried out to reduce this interaction as much as possible.

Asymmetric peaks of chelating analytes indicate that metal is pres­ent on the phase which chelating groups can approach and potentially irreversibly bind. With the undesirable interactions de­scribed, strong tailing of the peak occurs which in the worst case can also lead to a decrease of the peak area.

Most importantly, a column with little inertness is not the same as a bad column! Whether or not inertness is desired is always specific to the application. For some analytes, particular polar interactions or met­al interactions are advantageous to achieve stronger retention.

This article deals exclusively with analytes for which inert columns are important. Different column types were investigated with regard to their inertness and their interactions.

Flow rate and injection volume were adapted to the column dimen­sions.

Differences in the measurement results of the column tests with regard to inertness were observed. The highest inertness was shown by the Shim-pack GISS C18 and the Shim-pack GIST C18. Inert­ness is one of their greatest advantages. The chromatograms in figures 1 and 2 demonstrate that all peaks are symmetrical and have a high intensity. 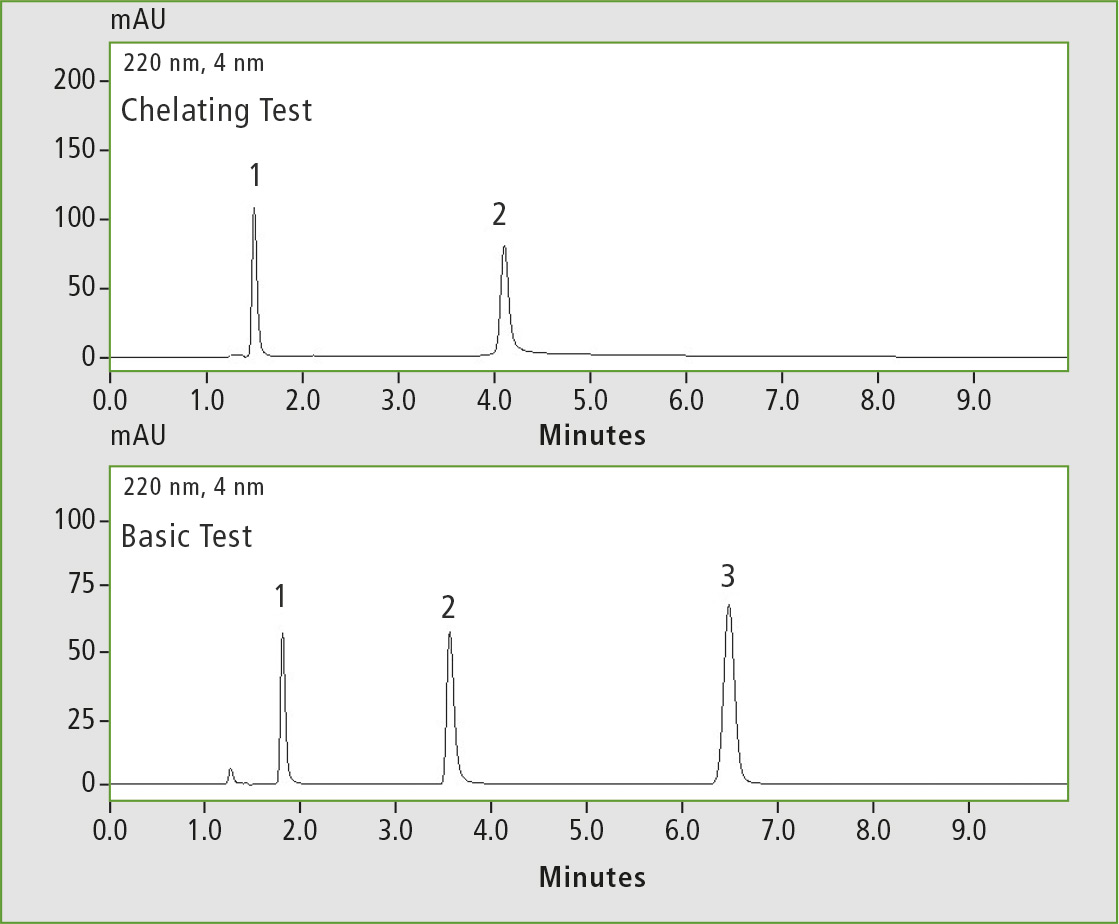 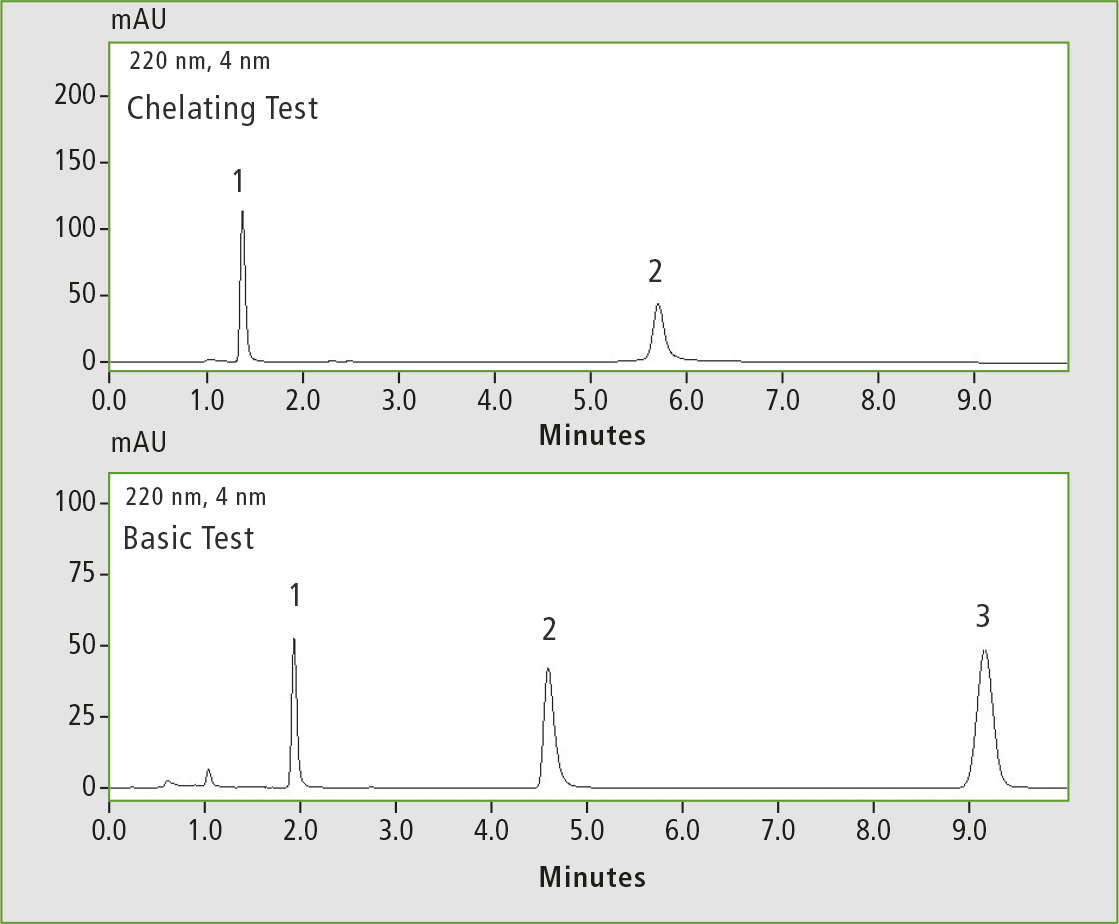 This illustrates an extraordinary inertness in the analysis of reactive substances, e.g. strongly acidic, basic or chelating analytes. Figures 3 and 4 illustrate comparative measurements on two different competitor C18 columns. Compared with figures 1 and 2, the chelating agent hinokitiol and the basic substance dextrometorphan show clear peak tailing and a lower intensity. 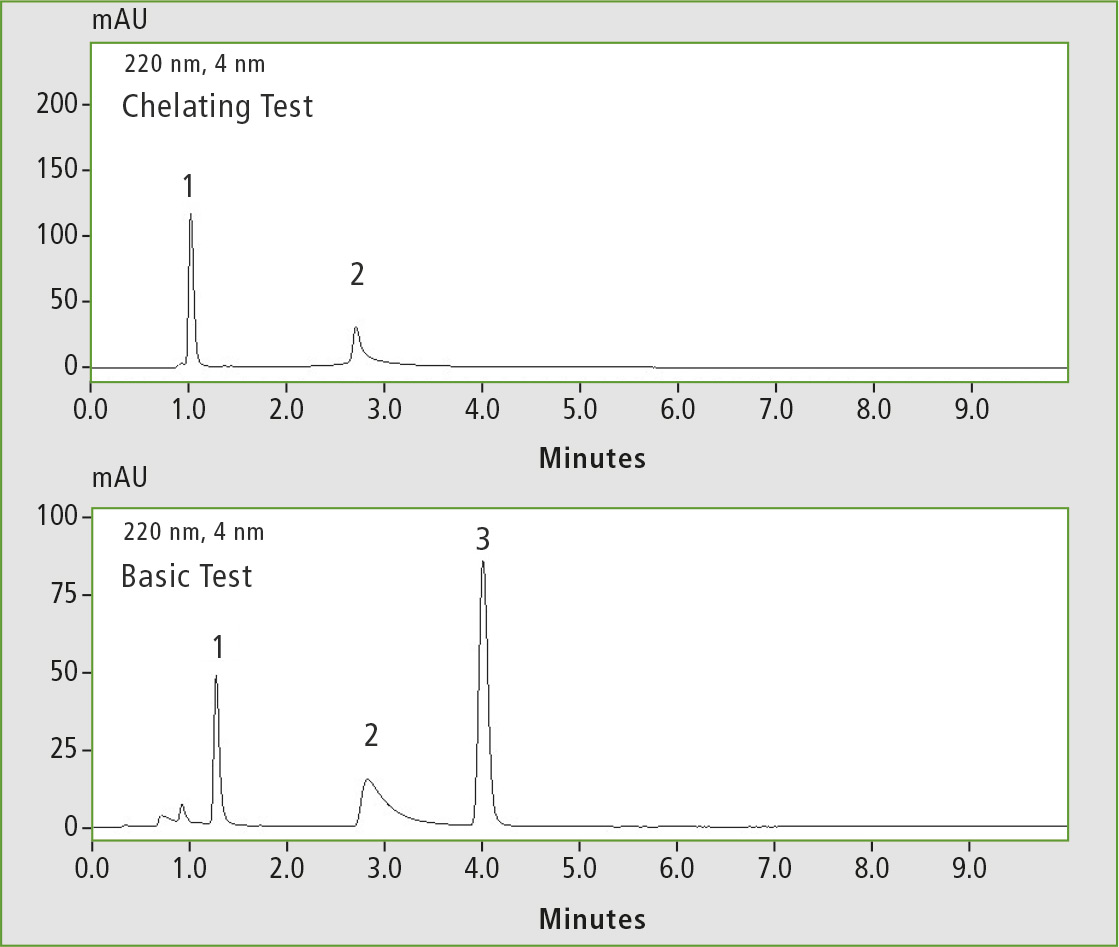 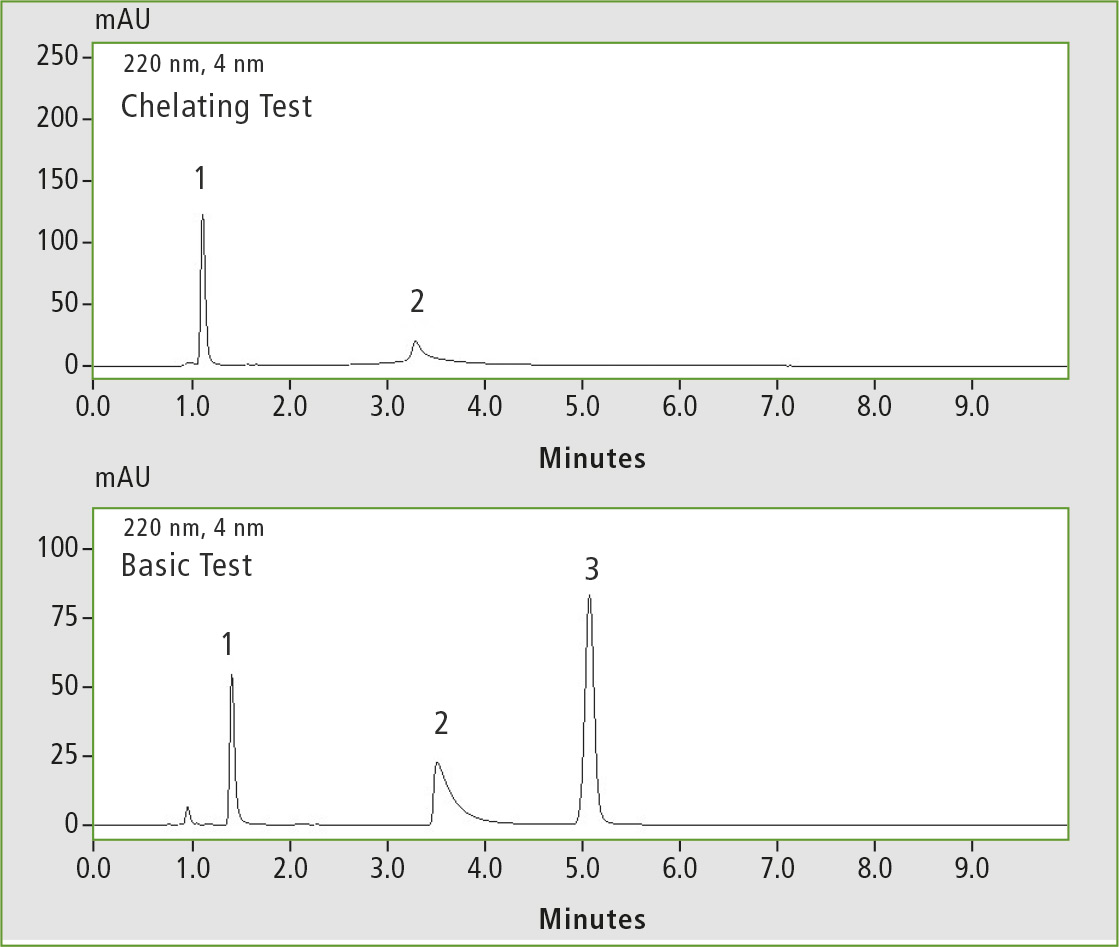 The GIS RP-Shield column has a polar functional group embedded between the silica surface and the C18 groups. This allows stability even under 100 % aqueous conditions.

In the column test, this property is clearly visible in the chromato­gram in the basic test, since the peaks, especially the dextrometorphan peak, are misshapen and asymmetrical (figure 5). On the other hand, for acidic analytes which can be measured ideally with this column, symmetrical peak forms are obtained. 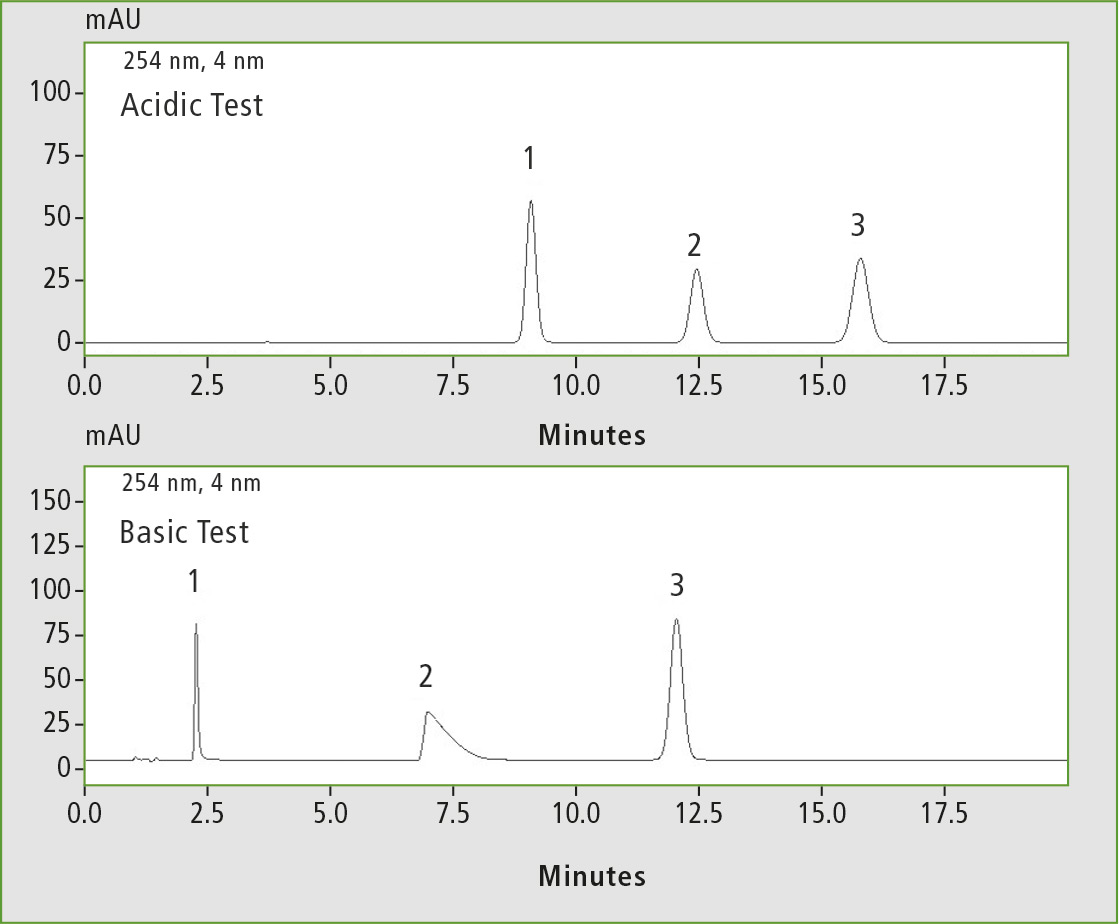 Compared with the phenyl-hexyl column, the phenyl column has no endcapping and therefore offers more polar interactions. This can be seen in the chromatograms in figures 6 and 7 when comparing the analyses of the basic substances on both columns.

Compared to conventional C18 columns, the GIST C18 AQ column shows very good retention to hydrophilic polar analytes. It can also be used with a 100 % aqueous mobile phase without loss of retention. The C18 AQ column is very inert. It shows tailing of basic substances due to the free silanol group present on more polar phases such as C18 AQ (figure 8).

For the analysis of strongly acidic, chelating or basic substances, an inert column must be used. In the Shimadzu range, GIST C18 and GISS C18 show particularly inert properties. Substances can be measured accurately with these two inert columns and show symmetrical peaks with a high intensity.