As of July 2018, over 20 Euro­pean countries have legalized cannabis for medi­cal use, and more are expected to follow in the coming years. Pos­session of cannabis is still illegal by federal statute; however there is an ongoing debate concerning legalization of medical and recreational cannabis. The demand for cannabis testing and analytical tools is therefore growing.

Numerous health benefits have been reported for cannabis, includ­ing general pain reduction, anti-nausea and reduction of seizures and autism. QC testing for can­nabinoids is essential for the accurate labeling of cannabis products in both medical and recreational cannabis markets. Cannabinoids are the primary active components of cannabis; these are target compounds for potency testing. Ter­penes influence the homeopathic effect, and contaminants such as pesticide residues and mycotoxine in cannabis products also need to be controlled to ensure consumer safety.

While the reason for controversy of cannabis as a legal medicine is the psychoactive effect of only one of the cannabinoids contained, namely Δ9-tetrahydrocannabinol (d9-THC), therapeutic benefits such as pain relief and reduced severity of nausea and seizures were also reported with use of a combination of other phytocannabinoids [1, 2]. Addi­tionally, a number of studies showed high safety with regard to a wide array of side effects and no tolerance to cannabidiol (CBD), another major component of can­nabis, has so far been demonstrated [3, 4]. CBD-rich products with no or neglectable d9-THC content are therefore becoming increasingly popular, as they can be obtained legally without the prescription necessary for d9-THC containing medication.

Regulatory demands regarding d9-THC make it the primary focus of potency testing. Cannabis plant material contains d9-tetra­hydrocannabinolic acid (THCA), the non-psychoactive, carboxylic acid form of d9-THC which is the precursor and is converted to THC upon heating. High performance liquid chromatography (HPLC) is the method of choice for quantification of cannabinoids in the presence of their acid form, as the high temperatures in gas chromatography (GC) only allow determination of total THC.

Cannabis “potency” is normally determined by quantitation of the major cannabinoids, including THCA, THC, CBD and CBN. The i-series HPLC analyzer for potency testing of cannabis products enables reliable quantification of eleven important cannabinoids (figure 1) using a fast and simple HPLC-UV assay. In the example described it was used for quality control in hemp oil with regards to the label claim of CBD as well as THC content. 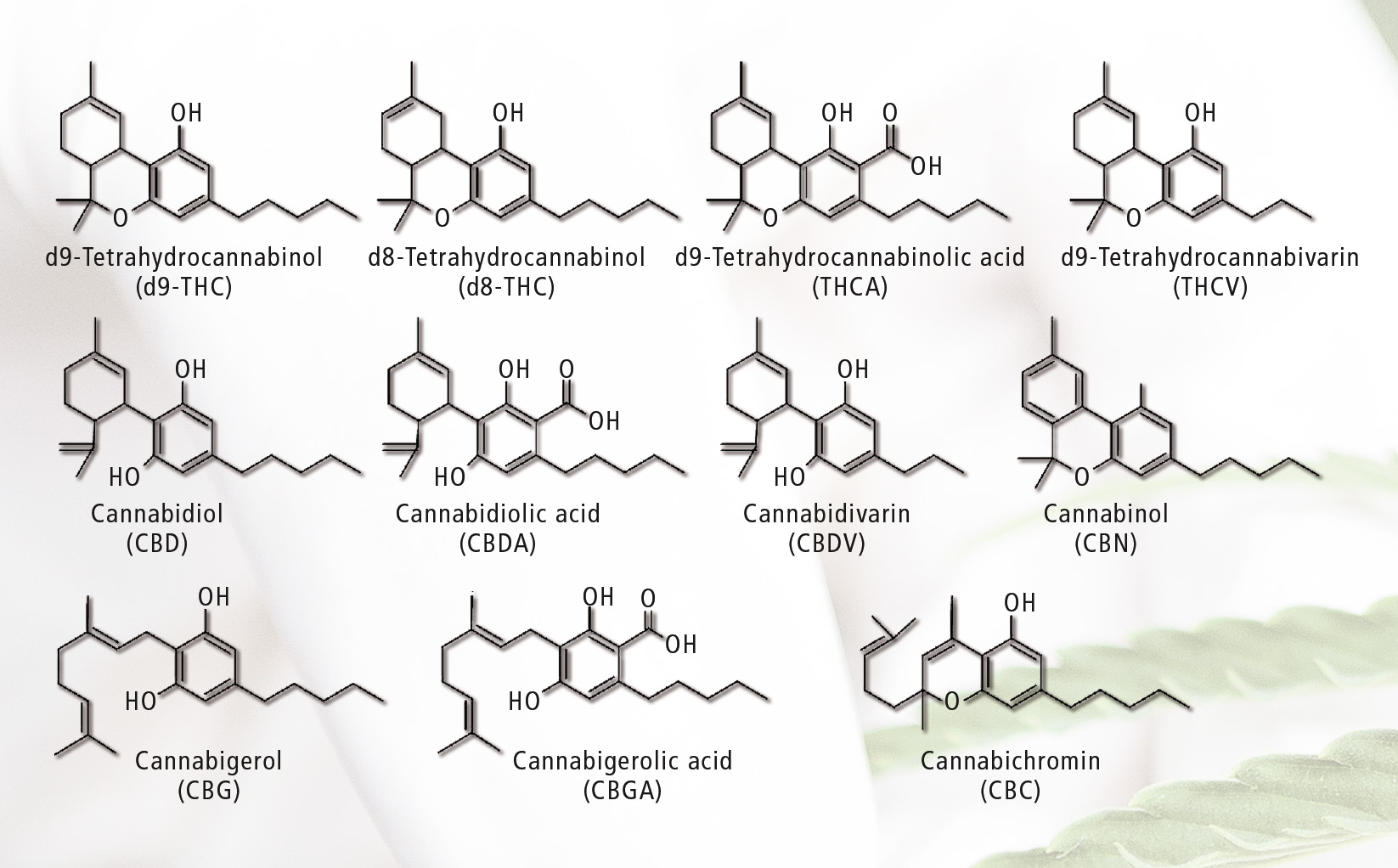 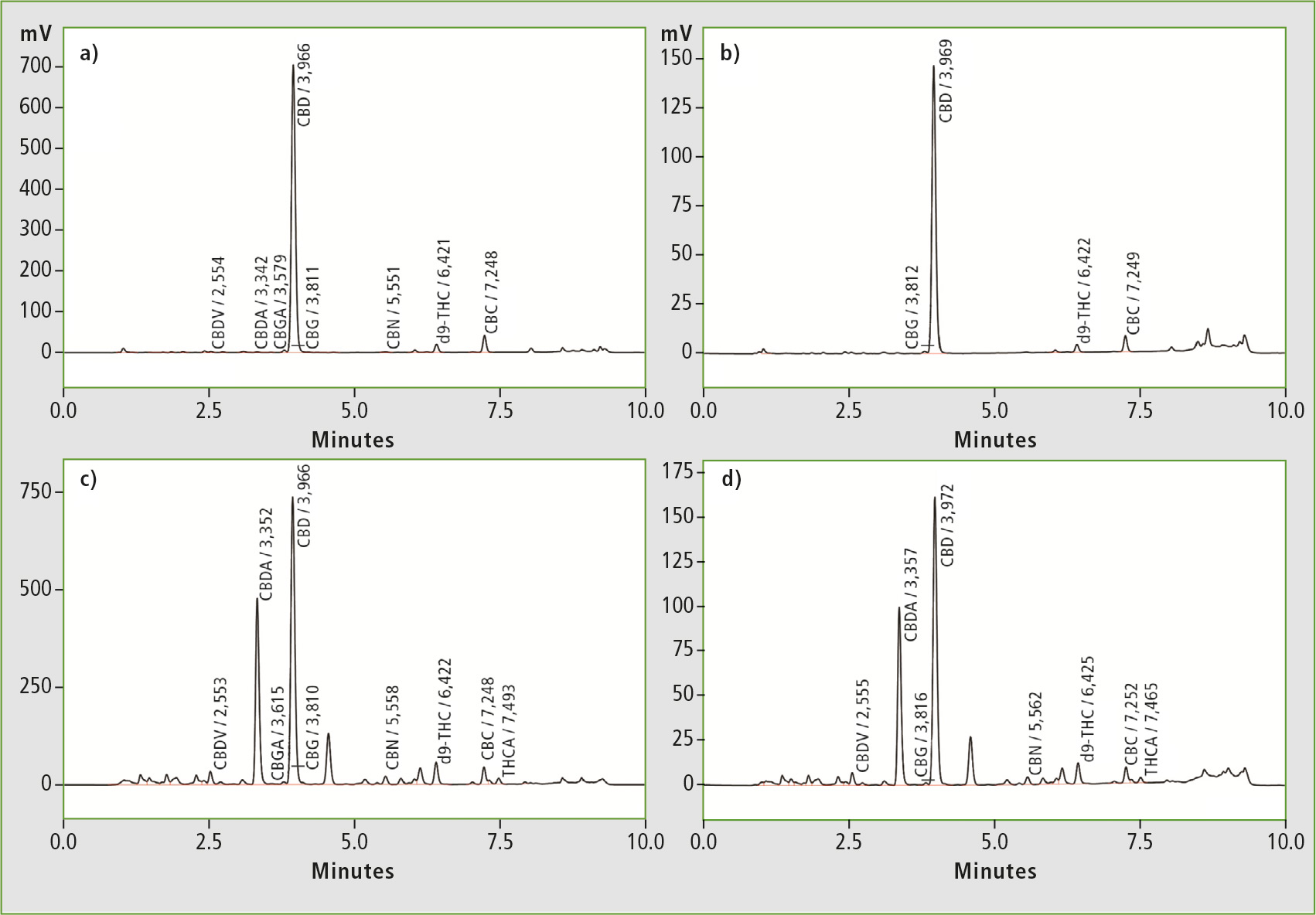 Two of the five oils tested were clear with a weak yellow/green coloration and showed high ratios of CBD to total cannabinoid content (92 %). Both samples also tested close to label claim at 95 % and 92 % respectively. This led to the assumption that each of these oils was a product of multi-step purification after extraction.

A third sample on the other hand was not transparent, and brown/ green and gritty in appearance. It also exhibited a distinctly “earthy” odor and revealed the highest content of CBD and total cannabinoids, with the lowest ratio of CBD to total cannabinoids (59 %). It was most likely the result of crude extraction only, with no further refinement. Although its CBD % of label claim tested the lowest (81 %), this sample contained the highest level of CDB compared to all other oils tested.

The two remaining hemp oils tested higher than label claim at 122 % and 200 % respectively, calling into question the type and accuracy of testing used to justify label claim.

All samples contained less than 0.3 % d9-THC, as expected from hemp products. This study showed that in three out of five randomly selected samples the actual concentration of CBD did not comply with the stated content, and provides a simple and fast assay for CBD and total can­nabinoid content for improved quality control of cannabis products.

Terpenes and terpenoid compounds are produced in tri­chromes (where THC is generated) and give cannabis its unique flavor and fragrance. Aside from their aromatic properties, terpenes also have advantageous health benefits. They act as essential, medicinal hydrocarbon building blocks and have a synergistic relationship with cannabinoids, influencing the overall homeopathic effect. From the pine odor of pinene to the citrus-like smell of limonene, characterization of terpenes is achieved easily using gas chromatography. With the Shimadzu GCMS-QP2020, HS-20 head space sampler and NIST spectral library more than 3,000 flavor and fragrance compounds can be identified for most efficient terpene profiling.

Cannabis has over 140 terpene components, many of which are of medicinal interest [5]. Predomi­nant terpenes in cannabis include

The concentration of individual terpenes varies by strain, can be anywhere from 0.1 to 1.5 % of its total dry weight and can vary depending on harvest time, drying and storage conditions. Terpene levels can decrease over time and can, after three months of storage, be reduced by more than half [8].

The decrease in terpene amount over time varies for different terpenes. Due to the uniqueness of terpene profiles, they can be used by cultivators as a “fingerprint” to partially ID the specific strain in question. As an example, the analysis of several strains of cannabis for 41 terpenes using GC-MS with headspace injection is described here.

A five-point calibration curve was created with concentrations ranging from 12.5 – 100 µg/mL. A part of the flower weighing 1.0 gram was frozen, followed by grinding to ensure a representative sample. Ten to 30 mg of the flower were then weighed into a headspace vial and capped. The final result was calculated to give wt %.

The first sample of cannabis, CB Diesel, was analyzed shortly after harvest. The resulting wt % of terpenes was similar to that in current literature [5]. The two other samples, Blue Dream and Haze Wreck, were stored at ambient temperature and exposed to light for one month prior to analy­sis. It has been demonstrated that different storage conditions can change terpene results over time, which should be taken into consideration when analyzing cannabis samples (figure 4).

Pesticide-free organically-grown cannabis was used for spiking studies and calibration curves. A variety of cannabis samples offered for retail sale, including cannabis concentrates, were then analyzed for pesticides.

Optimized MRM settings were used for each compound and at least one quantifier and one qualifier transition were selected. The retention times were determined and used to program the MRM segments for optimum duty cycle. Figure 6 shows a representative chromatogram of pesticide mix spiked in cannabis matrix at an intermediate level (31 ppb). 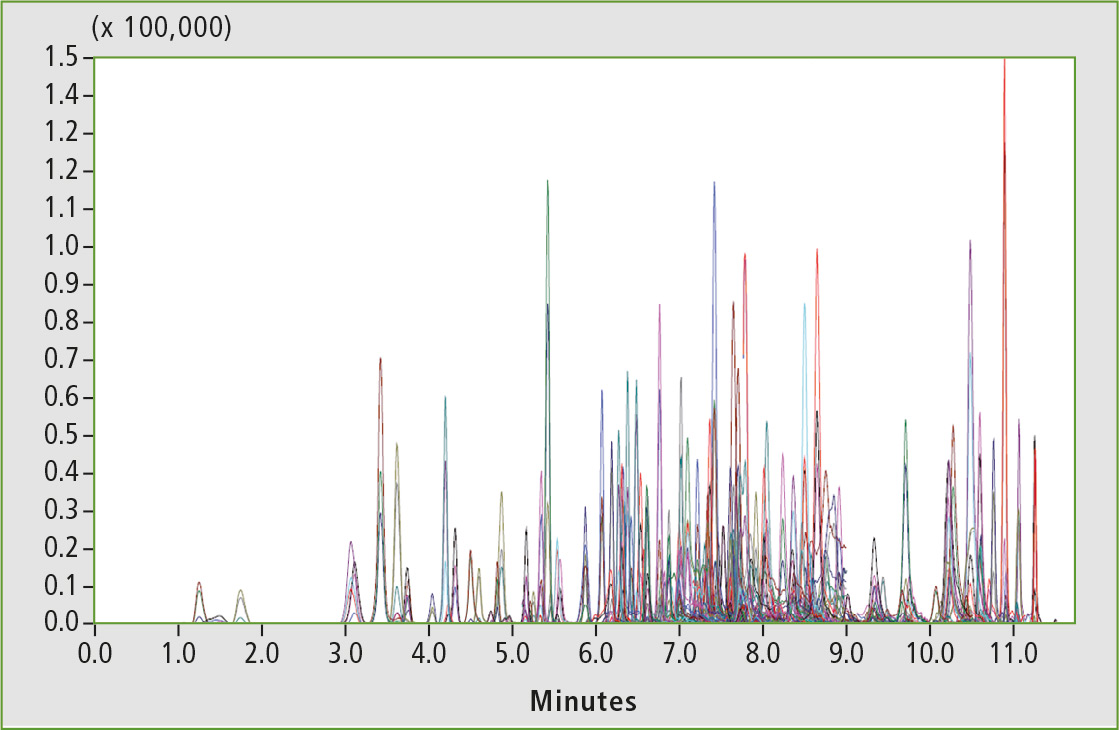 The calibration curve was prepared in spiked matrix over the range of 20 to 2,000 ng/g dried flower weight. Limits of quantitation were determined by measuring samples in triplicate at various levels. Signal-to-noise of at least ten to one and RSD of 20 % or better were required at the limit of quantitation. In addition, reproducibility of three QC replicates in three different cannabis strains was also required to be within 20 % RSD.

The most commonly detected pesticide was piperonyl butoxide which finds wide use in pesticide formulations to enhance activity of the main ingredient. It was detected over a wide range of concentrations. Myclobutanil, an antifungal known to be used in can­nabis cultivation, was detected in a number of samples as well. Among the cannabis concentrates, a high percentage tested positive for one or more pesticides.

Shimadzu does not support or promote the use of its products or services in connection with illegal use, cultivation or trade of cannabis products. Shimadzu is not condoning the use of recreational nor medical marijuana, we are merely providing a market summary of the cannabis testing industry.