The availability of reliable fatigue data is of continuous and often urgent need. In the following article, it is shown how to use the potentials of non-destructive and destructive testing methods in order to achieve a significant gain in information concerning fatigue behaviour combined with a reduction of experimental effort and cost required.

The new SteBLife approach is an enhanced short-time calculation method developed at the Chair of Non-Destructive Testing and Quality Assurance at Saarland University, Germany which takes into account that a material’s elastic-plastic reaction and hence relationship is non-linear.

With respect to a test strategy, the number of fatigue experiments required to determine a material’s complete S-N-curve can be limited to just a few tests with a special step-shaped specimen. This leads to a significant improvement in efficiency when compared to conventional determination of an S-N-curve where a minimum of 15 fatigue tests is required. Within the work to be presented the SteBLife method is demonstrated for normalized SAE 1045 (C45E) steel.

Stress-controlled constant amplitude tests (CATs) were carried out on C45E (SAE1045) at ambient temperature with a frequency of f = 5 Hz on a servohydraulic type EHF-L testing system by Shimadzu with a maximum cyclic/ quasistatic load F = 21/25 kN using a sinusoidal load-time function at a load ratio of R = -1.

The fatigue tests were performed to a maximum number of cycles Nmax of 2 x 106 or until specimen failure. To characterize fatigue behavior, the change in temperature ΔT on the surface of the specimen was measured continuously during testing along the gauge length(s) by an infrared camera. This change in temperature is directly related to deformation-induced changes of the micro­structure in the bulk material and can be considered to represent the current fatigue state. The experimental setup is shown in figure 1 [1, 2]. 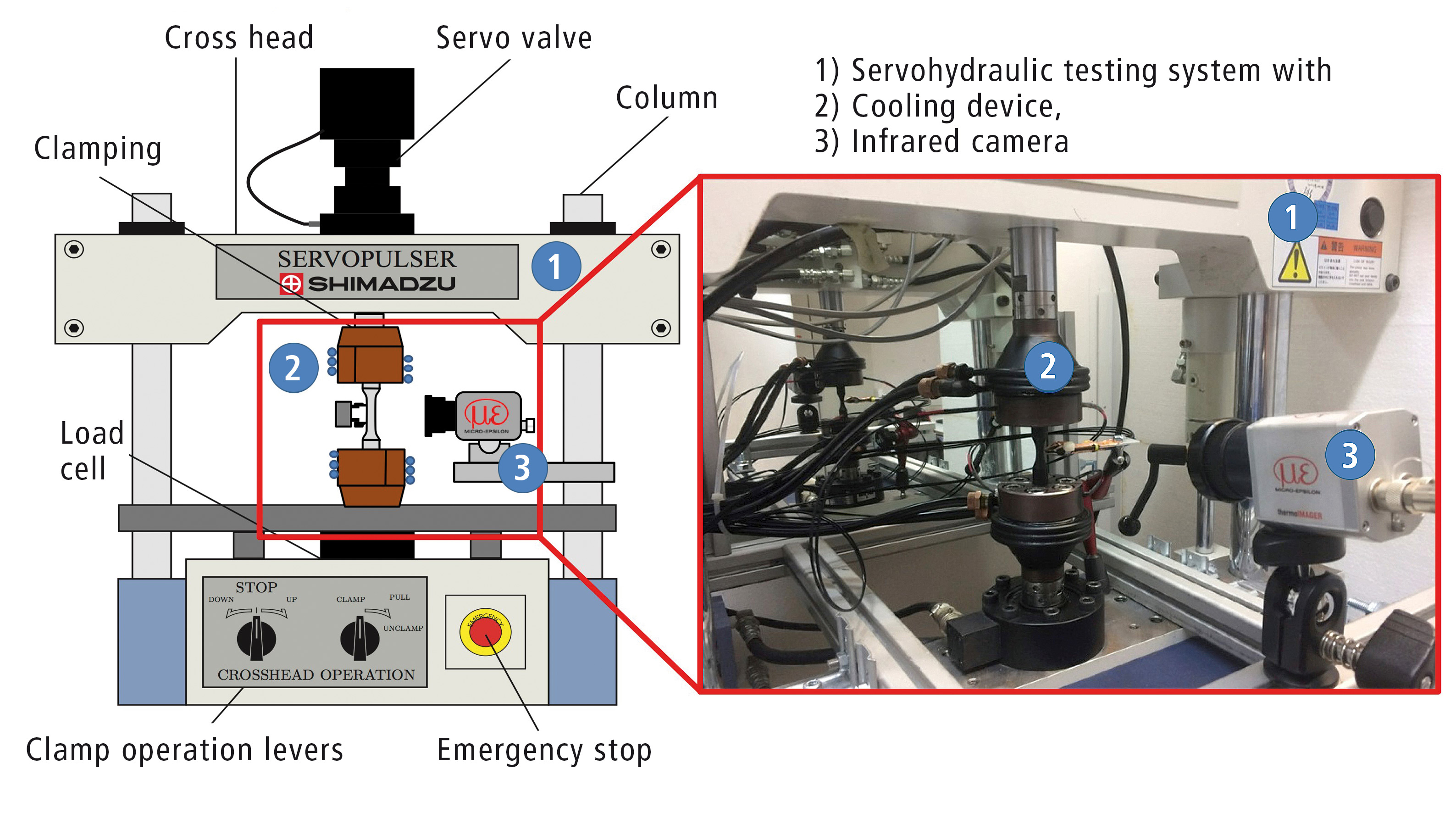 To achieve thermal stability of the specimen grips, a cooling device based on a Peltier-element-cooled water circuit was developed for use with the Shimadzu standard grips in order to reduce the temperature difference between the upper and the lower grip during the test to less than 1 K [1].

For temperature measurements, five measurement fields and two reference fields with a size each of 5 x 5 pixels were defined along the specimen within the infrared camera software, one in each gauge length and two at each shaft.

Each gauge length is of a cylindrical cross section and has the same volume. Transition from one gauge length to the next is realized through a radius of r = 4 mm, which results in a mild notch only and has to be taken into account. For homogeneous materials, just one test is needed to obtain a trend information regarding the S-N-curve.

For this application, SteBLifestc (s: single test, tc: trend curve) was developed. In the case of inhomogeneous materials, scatter bands for different failure probabilities become of high interest as additional information in the S-N-dataset. SteBLifemsb (m: multiple tests, sb: scatter bands) provides this information, and the scatter distribution of five fatigue tests is plotted according to a Gaussian distribution [3].

For SteBLifemsb, a total of five specimens were loaded by a sinusoidal alternating axial force with an amplitude of Fa = 9.170 kN (R = -1) on the Shimadzu servohydraulic testing system. Due to the symmetry of the specimen geometry, one cyclic deformation curve for the diameter of 6 (ΔT1) and two for the diameters of 6.2 (ΔT2) and 6.4 mm (ΔT3) each were generated resulting in local stress amplitudes of 360 (ΔT1), 337 (ΔT2o/u) and 318 MPa (ΔT3o/u) respectively. The five temperature-based cyclic deformation curves for one SteBLife test are shown in figure 2a. 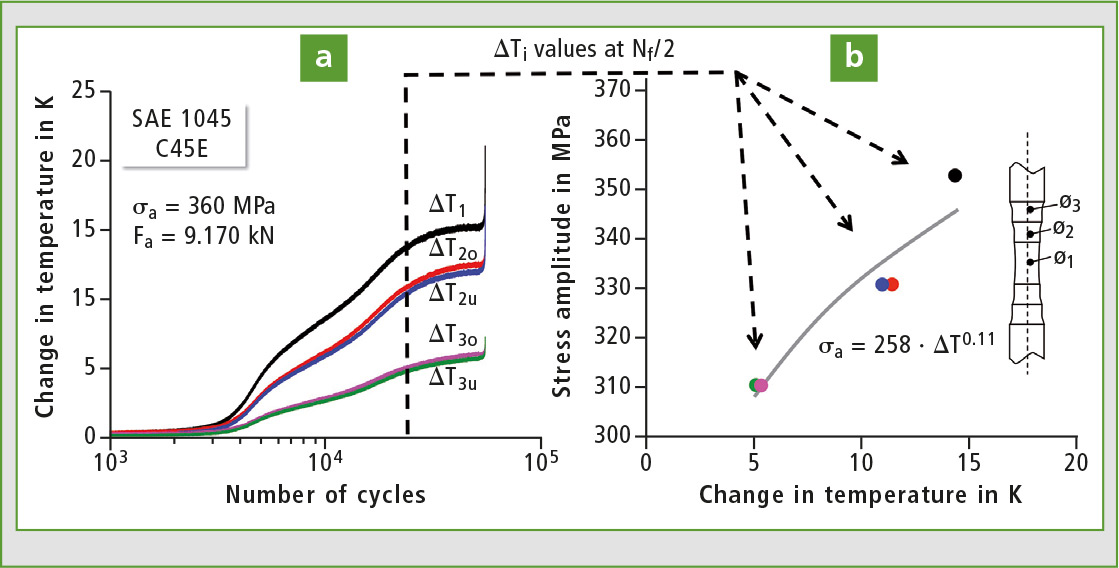 Figure 2a) Temperature based cyclic deformation curves for different diameters of the step-curved specimen, b) stress amplitude-temperature-curve in a constant amplitude test with σa = 360 MPa (related to 6 mm) for normalized SAE 1045 (C45E)

Specimen failure occurred during the test (figure 2a) at Nf= 52,320 cycles, which corresponds with conventionally determined fatigue lifetimes. The cyclic deformation curves provide the database for σa-ΔT-curves. As data input for the SteBLifemsb calculation, ΔT-values are taken from Nf/2 and plotted as σa-ΔT-curves as shown in figure 2b.

In order to calculate the parameters for one single S-N-dataset of the material, a combination of Morrow [4] and Basquin [5] equations is used in the following.

In accordance with SteBLifemsb, results of the five tests performed were analyzed with respect to lifetime as well as their σa-Nf-relation in the LCF/HCF regime. Nf as well as the σa-Nf-relation show scatter, which is allocated to material inhomogeneity. Different failure probabilities can be calculated from the Gaussian distribution.

In this example, Pf = 5, 50 and 95 % has been chosen for plotting of the scatter bands, while others can be calculated accordingly. Based on this approach, S-N-curves for Pf = 5, 50 and 95 % are determined. The results are shown in figure 3 together with lifetimes of 11 CATs evaluated on conventional hourglass specimens. Fig­ure 3 underlines that conventionally determined lifetimes can be described reliably by the scatter bands calculated on the basis of SteBLifemsb. 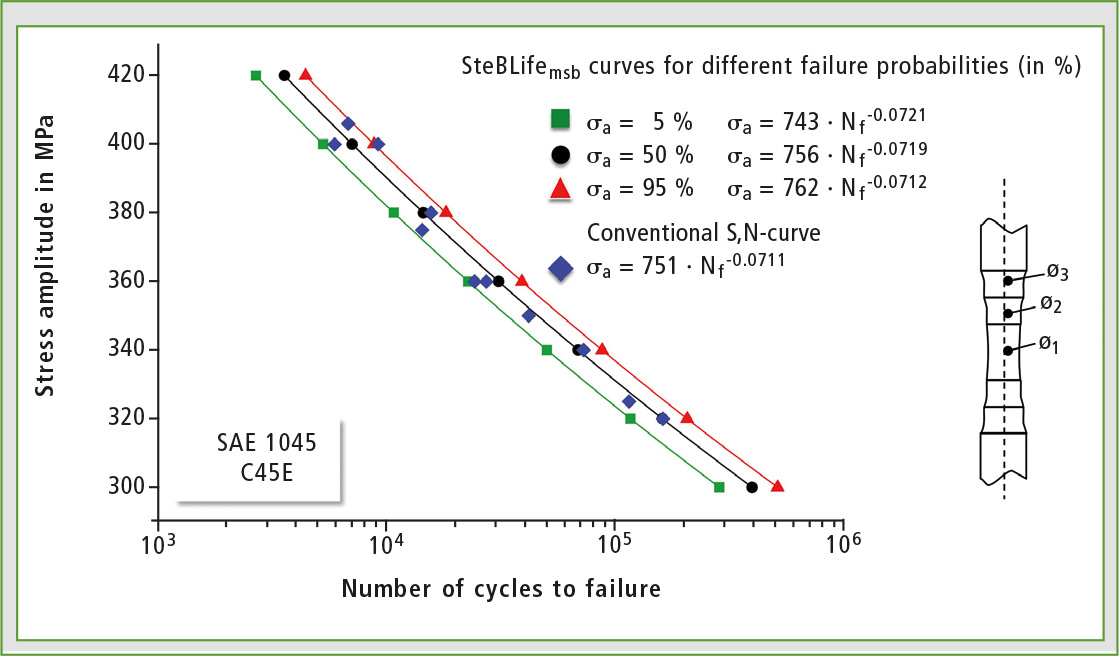 With the new SteBLife fatigue life calculation method, a stepped specimen geometry with five gauge lengths has been designed that can be used to determine a complete S-N-curve. This has been made possible by using non-destructive testing methods such as thermography, allowing the material response to be monitored in each of the sections. This short-time procedure enables reductions in experimental determination of the S-N-curve of more than 90 %, thereby providing the opportunity to take more fatigue relevant parameters into account andenabling the S-N-curve to be determined on a broader database.

With respect to test strategy, the number of fatigue tests required can be limited to four to five tests only when utilizing SteBLifemsb. Using SteBLifestc reduces the ef­fort for determination of the S-N-curve without scatter bands to one single CAT only, being much more efficient when compared to the approx. 15 fatigue tests re­quired in the conventional way.

Moreover, SteBLifemsb offers the possibility to calculate scatter bands for different failure probabilities, an important advantage particularly with regard to inhomogeneous materials with scattering properties.