In every ocean, at every depth – microfibers and microplastics

On all continents, scientists find polymeric microparticles in living organisms, the same in marine animals such as polar cod (Boreogadus saida) or deep-sea crustacea (Lysianassoidea amphipods) , which are an important part in the food chain of fish, penguins, seabirds or seals. Two working groups (Newcastle University, UK and Wageningen Marine Research, Netherlands) investigated the stomach contents of the respective animal species and isolated microparticles of around 100 µm in size.

Polar cod from the North Pole

The Arctic Ocean is often imagined as being undisturbed and untouched nature. However, the Arctic is not a closed system but is influenced by man, for example through climate change or environmental pollution. In recent years, an additional sea gyre has been described near the Svalbard archipelago (Norway) in the Arctic Ocean, which collects marine plastic waste from southern, more urbanized areas. Plastic residues were also found in the sea ice itself. When the ice melts, the plastic particles trapped in the ice can be released and are available to organisms that live and feed under it.

One of these organisms is the polar cod, a species of fish that spends its first years under sea ice. It feeds on small crustaceans and is an important prey for larger animals such as sea birds and marine mammals. Polar cod is therefore considered a key species of the Arctic ecosystem. For this study, the fish were caught directly under the sea ice of the Eurasian basin and in open water around Spitsbergen [1]. 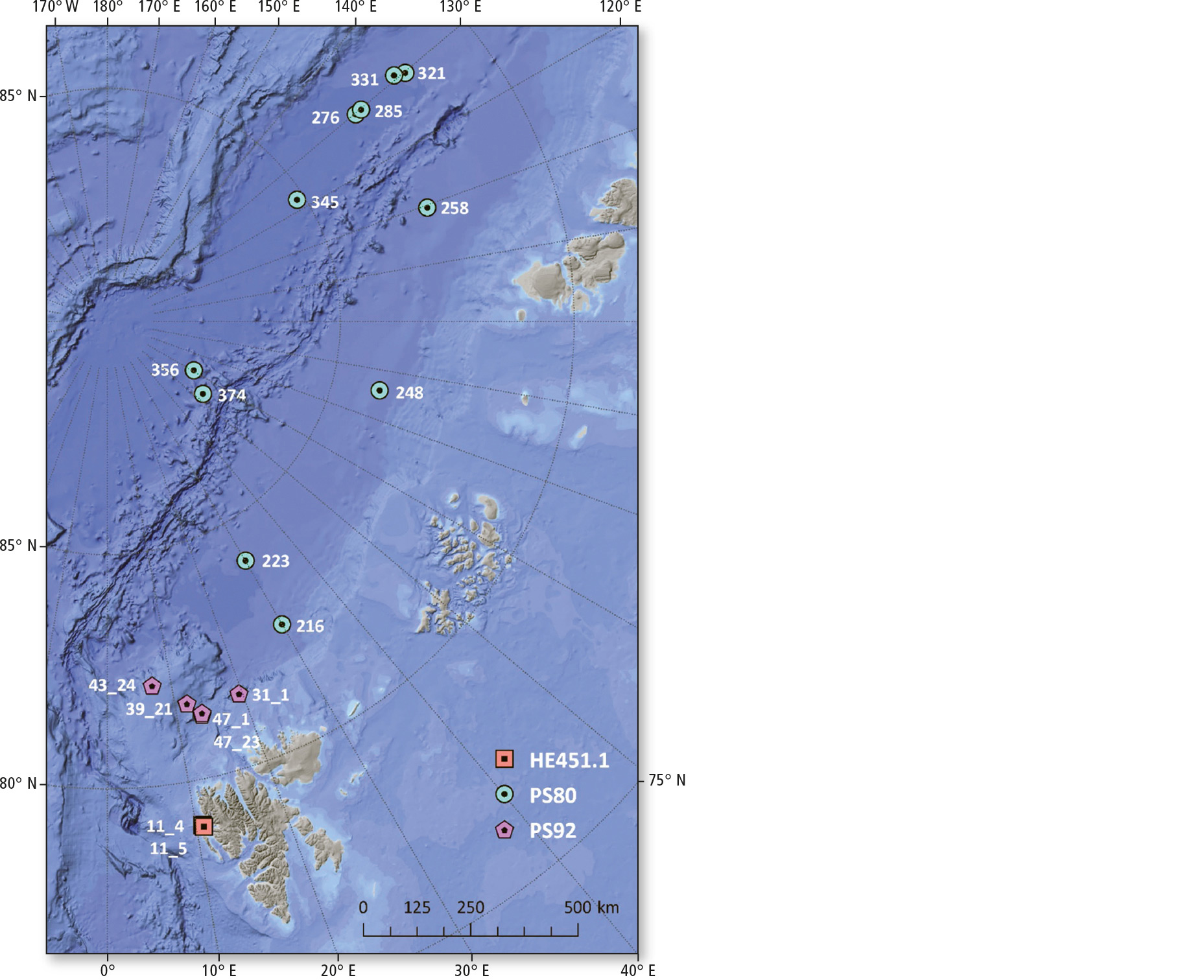 The University of Newcastle used submersible probes to collect mobile marine organisms in the extreme depths of the sea. Samples were taken at a depth of 11,000 m in the Mariana Trench, a deep-sea channel in the western Pacific just east of the Micronesian Islands, and in other trenches in the Pacific with depths up to 7,000 m. Most organisms were Lysianassoidea amphipods, creatures adapted to the conditions of the deep sea. It has been found that these deep-sea organisms are even capable of developing enzymes that digest wood fibers [2].

The biggest problem in microparticle analysis is contamination of the samples by electrostatically charged particles flying at the sample or particles carried by humans (scales and fibres). Some plastic particles, so-called microfibers, for example from clothing, are not only absorbed by animals but also so light that they can float in the air. It is impossible to distinguish between fibers that get into the sample via intake by the animals themselves or via air pollution [1].

Purification of microparticles is another difficult issue. Should the samples be treated chemically to remove all protein-like residues or should they simply be washed with water? Using chemical cleaning may lead to loss of information about adhering chemicals; cleaning with water preserves this information, but the cleaning itself may be less thorough. The microparticles from amphipods were treated with a KOH (potassium hydroxide) solution that dissolves all organic adhesions without attacking the plastic itself. Particles from polar cod were cleaned with water.

The definition of a microparticle varies from publication to publication. Particles in the µm range are the reason for developing a measuring technique that works well with the appearance of the samples. Infrared spectroscopy is the method of choice.

The IRTracer-100 FTIR instrument, the AIM-9000 infrared microscope and the DC3 diamond cell from Specac were used to examine the microparticles. Depending on their appearance, single point measurements or surface analyses (mapping) were carried out. The diamond cell presses small, uneven particles flat, up to the point where they become transparent. This way, particles can be analyzed using the transmitted light method. The infrared spectra measured were identified with spectral libraries from different sources (Shimadzu, Sadtler, STJapan-Europe and others).

To investigate the potential correlation between plastic in sea ice and the ingestion of plastic by fish, plastic was sought in 72 polar cod stomachs. Of the 72 fish, two individuals (2.8 % of the collected sample) containing small plastic particles were found. This result is comparable to intake rates for fish from Norwegian and Canadian waters. The blue particle of 200 µm shown in figure 2 was analyzed using infrared microscopy. The result of the transmitted light measurement showed that the particle consists of a combination of inorganic (kaolin) and polymer-based material (PMMA) (figure 5).

Figure 2: Two of the particles found in polar cod stomachs loaded with plastic

The infrared spectrum (transmission) of the red particle in figure 2 is the result of a mixture of epoxy resin and acrylic based adhesive [1]. 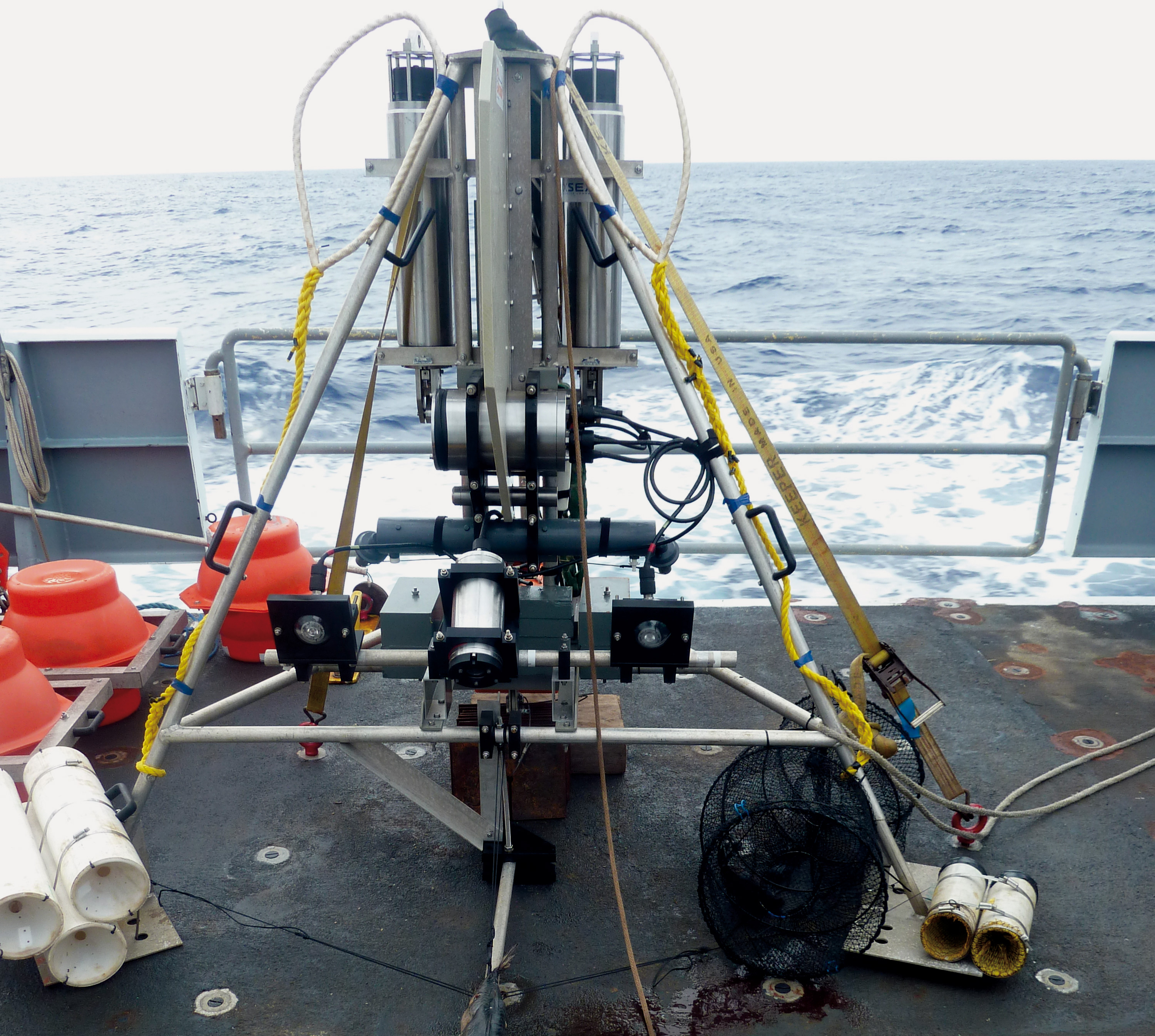 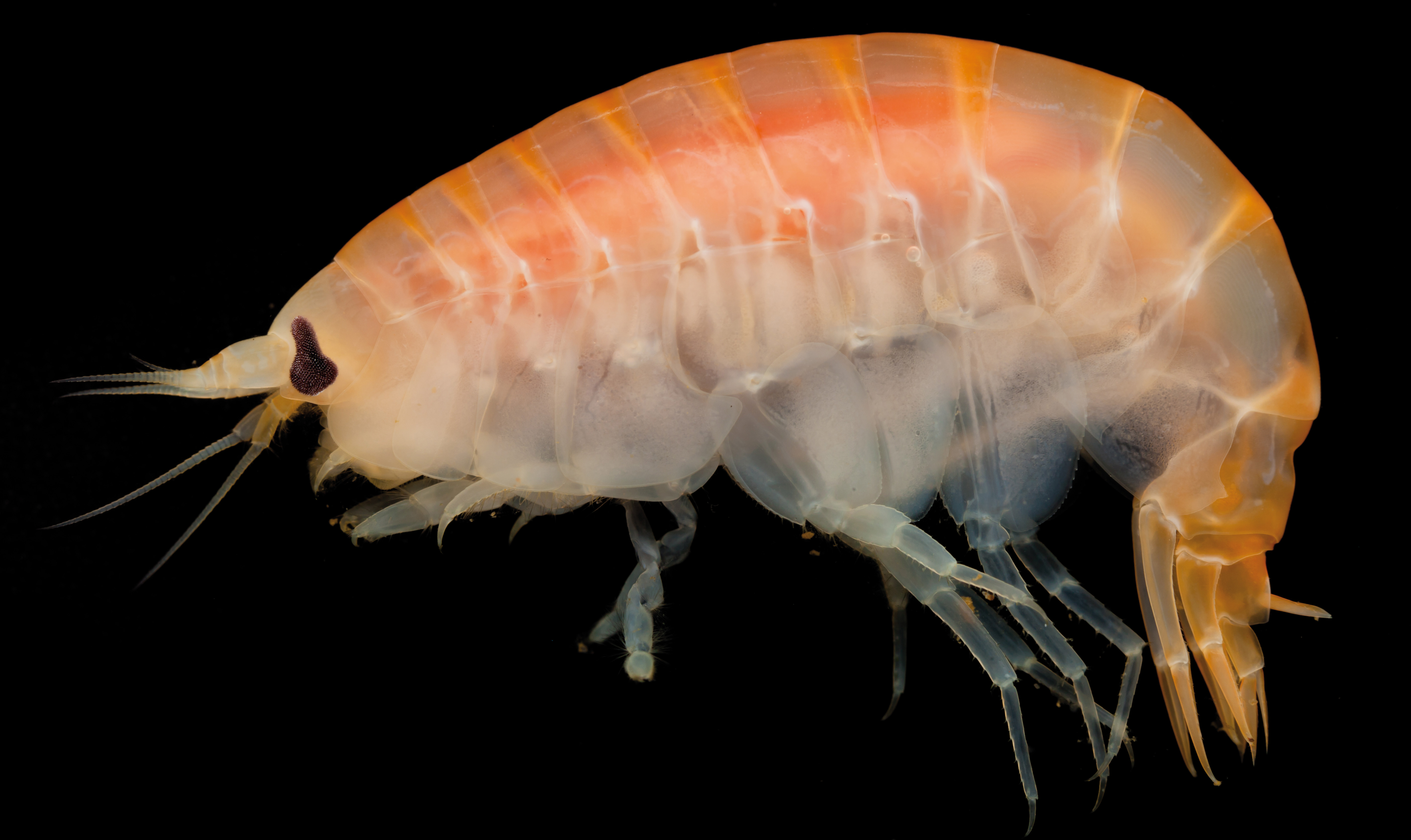 Figure 5 shows an example of the analysis of the blue particle. The main components PMMA (polymethyl methacrylate) and kaolin of the particle were identified using the library function. The figure 5 shows the kaolin in the middle of the transmission spectrum of the microparticle and below the spectrum of PMMA. 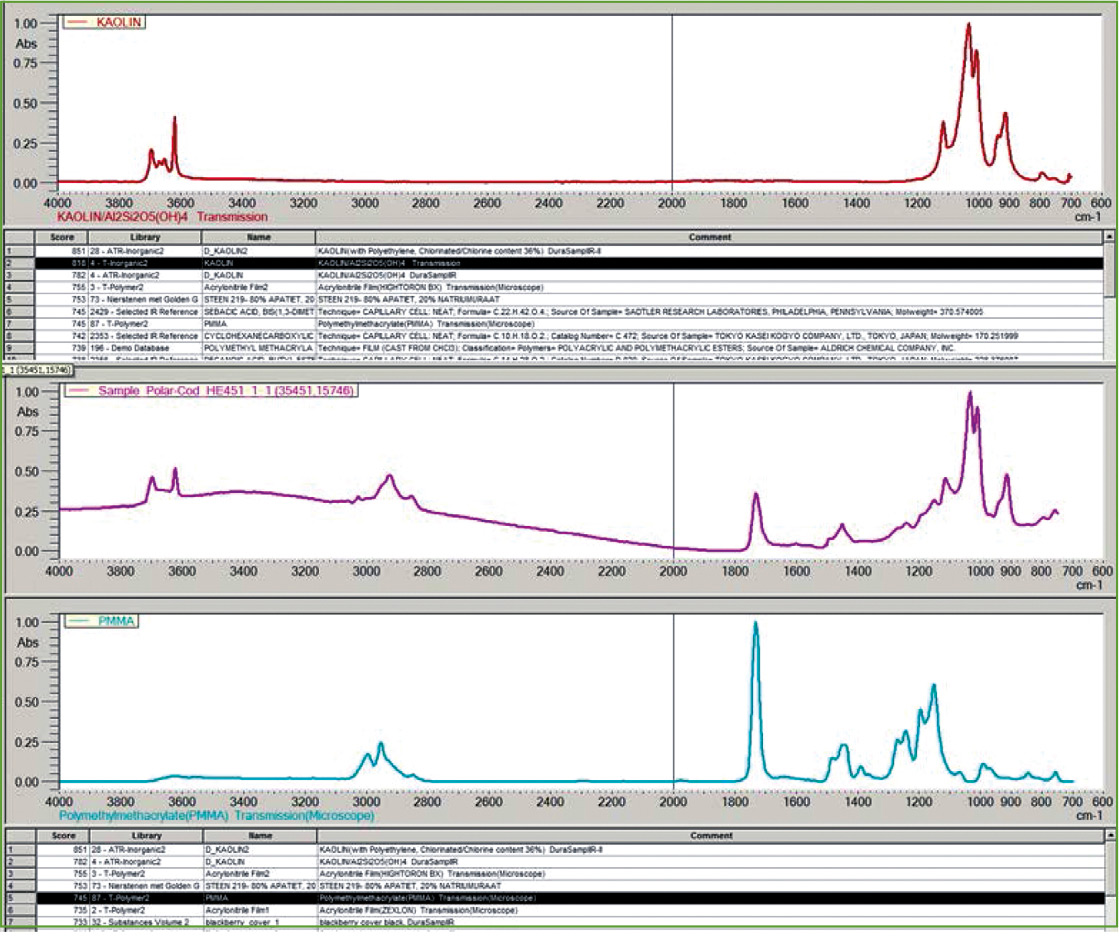 Figure 5: Analysis of the samples found in the polar cod

The stomach of a deep-sea shrimp contained a particle composed of “polyethylene” partially surrounded by a mixture of organic and inorganic matter (figure 6). As a polymer, polyethylene is naturally very light with a density below 1 (table 1) and it actually floats in upper water layers. This particle has presumably reached the deep sea layers by the agglomeration of small aquatic animals and their skeletons or other external influences. 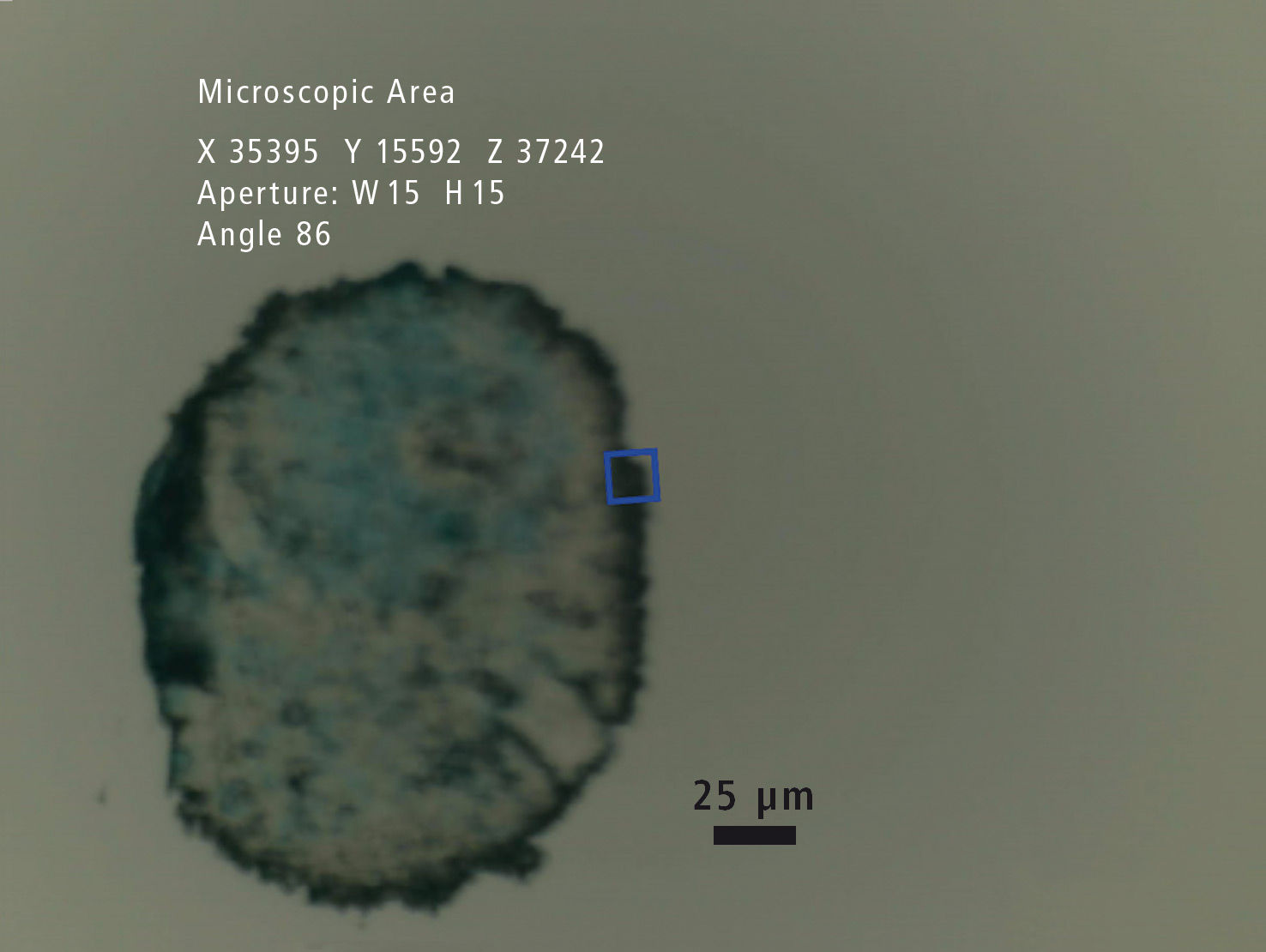 Figure 6: Image of the particle with the CCD camera of the AIM-9000 infrared microscope

In the upper right section of the particle (figure 6) the measuring spot of 15 x 15 µm can be seen. It is a transmission image of a particle of 100 µm which was widened by smoothing using the diamond cell.

The figure clearly shows that the particle has a corona. Measurement determined that it was a ring of CaCO3 (calcium carbonate) (figure 7). Due to the clear representation, the particle was scanned by way of screening and mapping (figure 8). In the mapping view, set to the carbonylic band of CaCO3, this ring can be displayed very clearly. 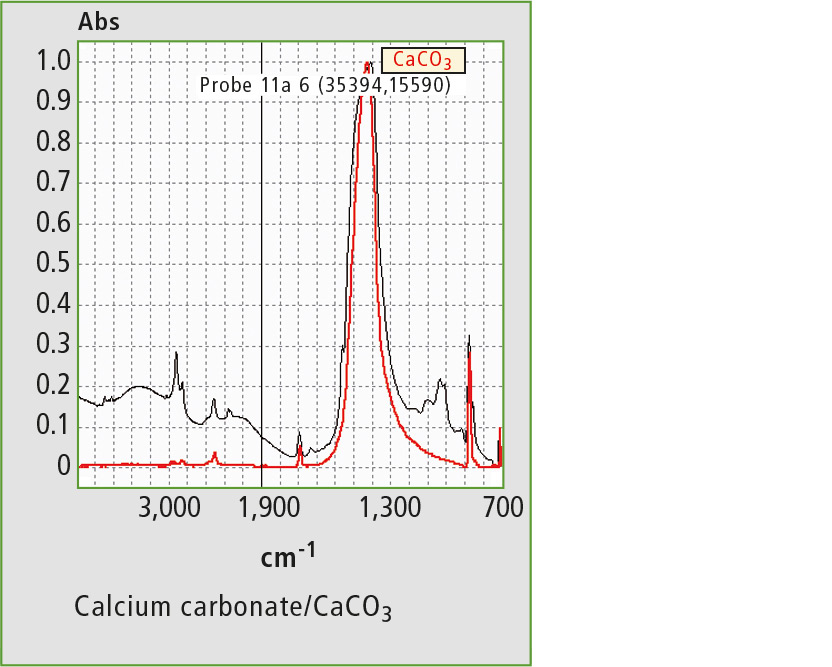 Figure 7: Spectra of the amphipods samples 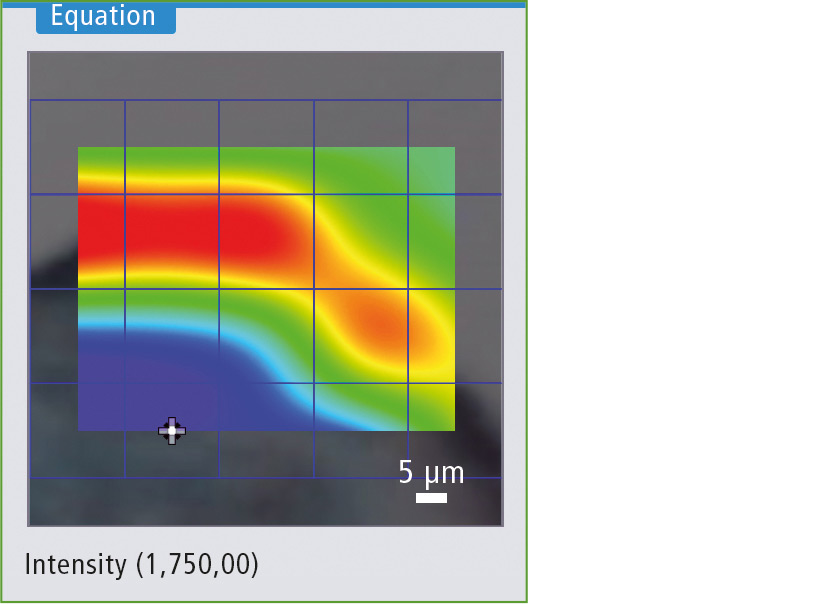 Figure 8: FTIR-Mapping of the amphipod sample

Figure 8a: Color-scale of the FTIR Mapping

In combination with other factors such as climate change, increased shipping and the expansion of fisheries, plastic pollution can be an additional stress factor for the sensitive Arctic ecosystem [1].

Once plastic reaches the bottom of the deep sea, it is expected to remain there. The result is an accumulation of plastic on the seabed – an alarming conclusion. Isolating fibers from the stomach of an animal living at 11 km depth already shows the extension of the microplastic problem [3].