Protein and peptide studies are essential for understanding many biological processes at the molecular level. Tandem mass spectrometry (MS/MS) has become the method of choice for both qualitative and quantitative analysis of proteins and peptides due to its high sensitivity, accuracy and applicability in analysis of complex mixtures. However, analysis of trace amount of peptides may be problematic due to insufficient ionization efficiency of some peptides. One way to overcome this problem is to introduce an ionization enhancer into the analyte molecule. The team at University of Wrocław developed a new ionization tag based on 2,4,6-triphenylpyridinium moiety, which enables LC-MS analysis of peptides at attomole level using MRM (multiple reaction analysis) mode.

Advanced mass spectrometer technology does not always ensure successful analysis of trace amount of peptides due to the insufficient ionization efficiency, resulting in limited sensitivity of analysis. The affinity of the proton for the peptide molecule, the ionization efficiency, is a crucial parameter affecting ionization yield, hence the abundant signal of arginine (the most basic amino acid) containing peptides [1].

One method for increasing ionization efficiency of a peptide without arginine is to introduce a fixed charge group into the analyte molecule. The Wrocław University researchers recently proposed the application of 2,4,6-triphenylpyrylium salts for the derivatization of peptides [2].

Pyrylium salts react readily with sterically unhindered primary amines to form pyridinium salts with a fixed charge. This reaction is particularly selective toward the e-amine group of lysine. Thus, the 2,4,6-triphenylpyrylium salts as well as a tryptic digested protein for derivatization of synthetic peptides were applied. The peptides derivatized generate an abundant protonated 2,4,6-triphenylpyridinium ion during CID (collision induced dissociation) fragmentation, which has proved to be useful in analysis using selective mode e.g. MRM, or precursor ion scan.

The research team also proposed a novel method for obtaining isobaric peptides by combination of 18O enzymatic labeling [3/4] and modification of peptides by 12C and 13C isotopologues of 2,4,6-triphenylpyrylium salts. This combination leads to the formation of isobaric duplexes. The subsequent fragmentation experiment results in formation of reporter ions, which differ by 4 Da. Their comparison provides quantitative evaluation of the peptides in the compared samples.

Currently, this approach is being tested on urine samples. The aim of this study is to develop a method allowing early detection of preeclampsia (PE) state based on podocin tryptic fragments, which was recognized as a PE biomarker. PE is a multisystem disorder which remains a leading cause of maternal and neonatal mortality and morbidity.

LC-MS of derivatized bovine serum albumin (BSA) tryptic digest was performed on Shimadzu’s LCMS-8050 triple quadrupole mass spectrometer. For the experiment using precursor ion mode, the researchers chose a fragmentation ion at m/z 308.2 which represents the protonated 2,4,6-triphenylpyridinium cation at the collision energy of 45 eV. The same LC-MS mass spectrometer was used to analyze the model isobaric peptides (duplex) by MRM mode as well as Q1Q3 scan. Separation was carried out on an RP-Aeris Peptide (50 x 2.1 mm, 3.5 µm) column with a gradient elution of 5 – 60 % B in A (A, 0.1 % HCOOH in water; B, 0.1 % HCOOH in MeCN) at room temperature over a period of 45 min for digested BSA (flow rate: 0.1 mL min-1) and 15 min for model isobaric peptides (flow rate: 0.2 mL min-1). The samples were dissolved in 400 µl of water: acetonitrile mixture.

The sample was dissolved in dimethylformamide (DMF), and three times excess of 2,4,6-triphenylpyrylium salt and the same excess of triethylamine (TEA) was then added. The resulting mixture was vortexed and incubated at 70 °C for 20 min. Finally, the solvent was evaporated under nitrogen stream and lyophilized. 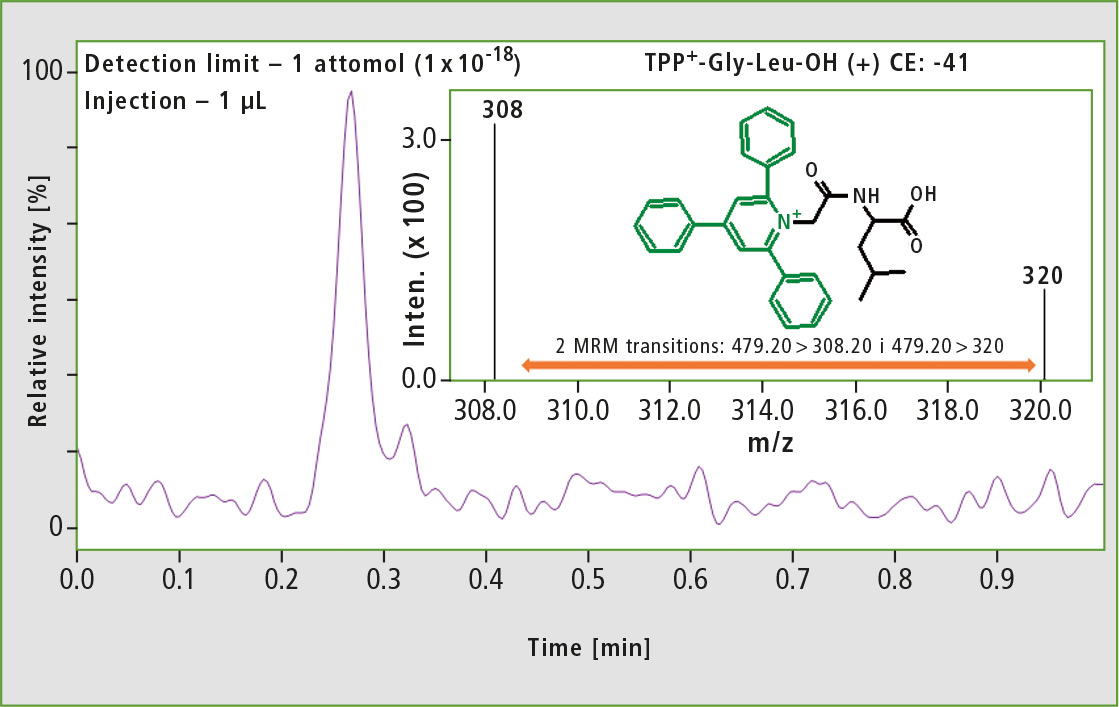 For the analysis of derivatized BSA precursor, the ion scan mode was used. Protonated 2,4,6-triphenylpyridinium cation at 308 m/z and 45 eV collision energy was chosen as product ion. This resulted in observation of peptides containing ionization tag only (see figure 3). 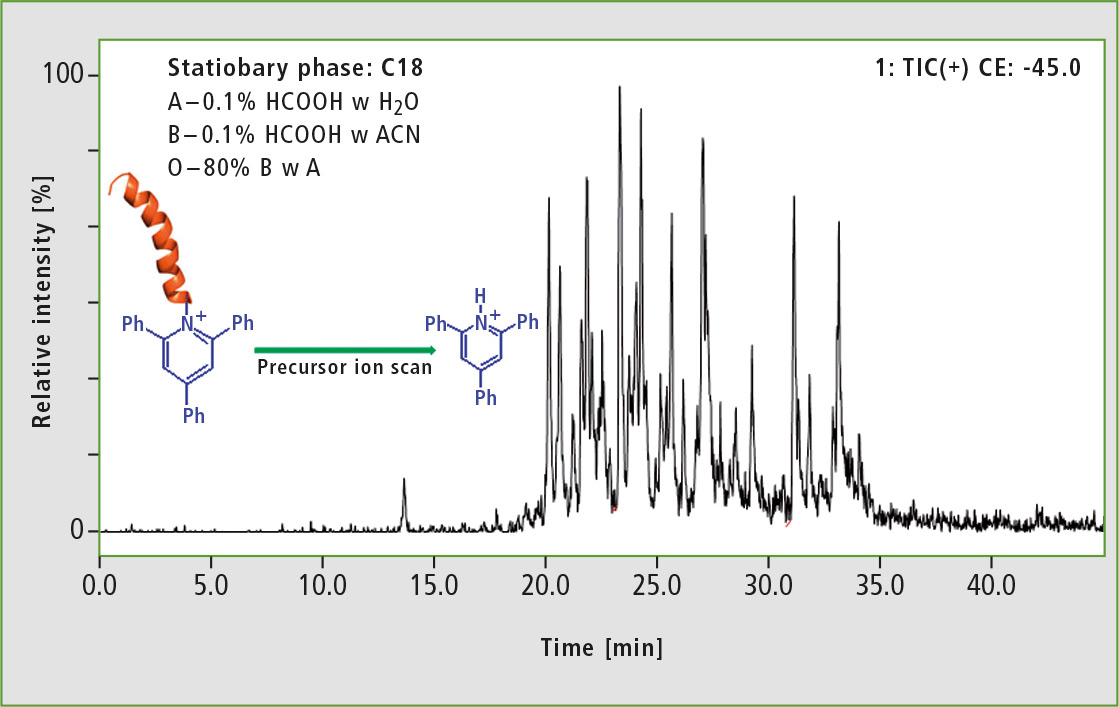 The 16O/18O exchange is widely used in comparative proteomics. Tryptic digestion of a protein was carried out in H218O resulting in incorporation of two heavy oxygen atoms into the carboxyl group of lysine. Tis approach meets some inconveniences, e.g. back-exchange or overlapping of the isotopic peaks. The research team proposed the modification of this approach by additional usage of 2,4,6-triphenylpyrylium salts. 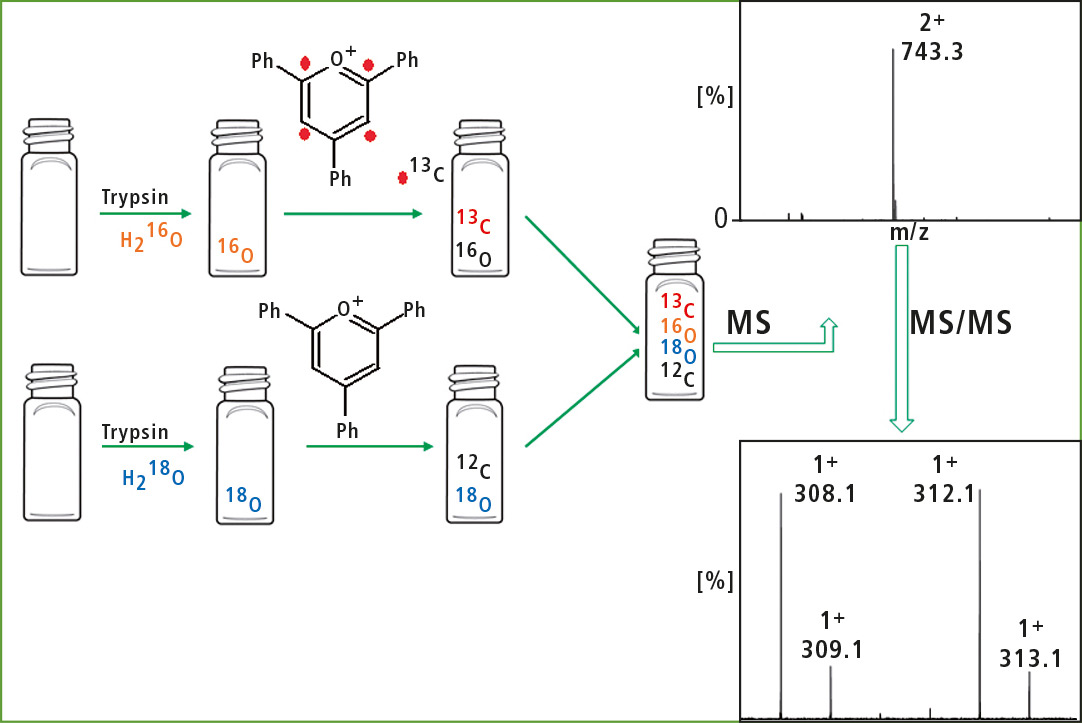 Figure 4: Schematic of the procedure to obtain isobaric peptides (duplex) from two samples

Afterwards, the samples are pooled and analyzed together. The fragmentation of the ions corresponding to isobaric peptides generate reporter ions with a mass difference of 4 Da (labeled and unlabeled 2,4,6-triphenylpyridinium). Comparison of their intensity enables determination of relative concentration of peptide in two samples. In this way, there is no risk of overlapping of isotopic peaks. Moreover, back-exchange was not observed since the pyridinium modified lysine residue was not recognized by the enzyme.

Analysis of peptides in multiple reaction monitoring (MRM) mode allows for detection of peptides with high sensitivity. This results from the improved signal-to-noise ratio. Thus, the analysis of the model isobaric peptides (Ac-Leu-Val-Asn-Glu-Val-Thr-Glu-Phe-Ala-Lys-OH; 66-75 fragment of BSA) using the MRM mode was performed. The research team used the diagnostic reporter ions (m/z 308 and 312) to the MRM transitions. Results of the analysis are presented in figure 5. 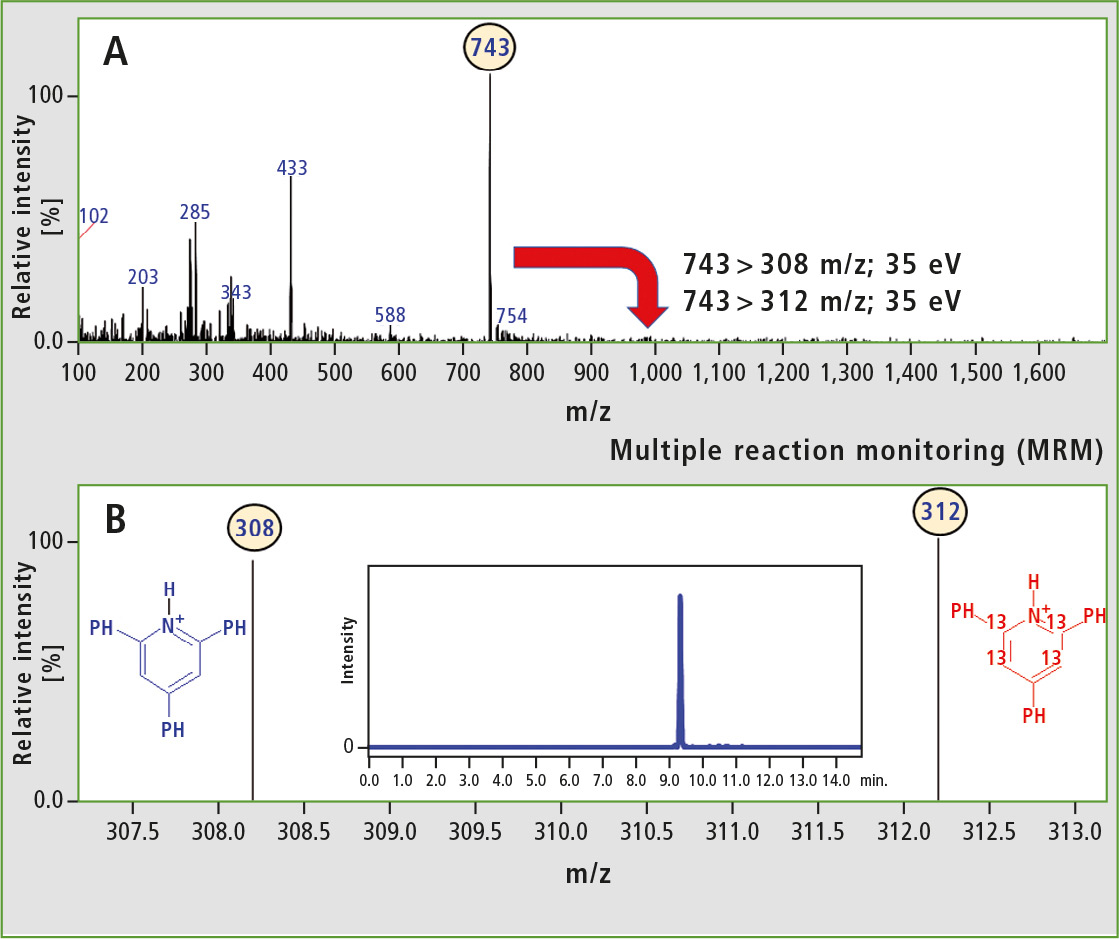 The full scan spectrum of the model isobaric peptides is presented in the upper part of figure 5. The abundant peak at m/z 743 corresponded to the duplex. In this experiment, two equimolar samples were analyzed, thus two diagnostic peaks with comparable intensity were observed. The presence of 2,4,6-triphenylpyridinium moieties in peptides increased the ionization efficiency. Analysis of modified isobaric peptides in MRM mode may therefore result in highly improved limit of detection.

The synthesized isotopically labeled and unlabeled 2,4,6-triphenylpyrylium salts were used to analyze a tryptic digest of podocin obtained from urine of pregnant women. The urine analyzed derives from different stages of PE. The schematic representation is presented in figure 6. Application of pyrylium salts allows both increase of analysis sensitivity and the introduction of stable isotope to the peptides, which in turn enables LC-MRM-MS analysis using multiple isotope dilution technique.

Figure 6: Schematic representation of the sensitive shotgun proteomics analysis of urine proteins derived from the same patient at different stages of PE. The tryptic peptides isolated from samples collected at different time will be derivatized using ionization enhancers labeled with different number of stable isotopes. The derivatized samples will be combined and the changes in relative concentrations of podocin and other biomarkers will be analyzed by isotopic dilution approach by LC-MS.

A new ionization tag based on 2,4,6-triphenylpyridinium scaffold was designed, enabling highly sensitive analysis of peptides by LC-MS at attomole level. The advantage of this ionization tag is convenient derivatization procedure and high selectivity toward e-amino group of lysine. Moreover, the reaction of pyrylium salts does not require active groups with low stability in water solutions. The adequate combination of 16O/18O exchange and derivatization using 2,4,6-triphenylpyrylium salt or its 13C4 isotopologue enables obtaining of isobaric peptides. The comparison of signal intensity of the reporter ions derived from the isobaric peptides allows for quantitation of the peptides. Recently, pyridinium salts in LC-MRM-MS analysis of podocin as a biomarker of PE stage was applied.