Beer is probably one of the oldest alcoholic drinks in the world. In fact, Chinese and Egyptians already made beer in 4000 years BC. In Europe, beer was the Celts’ famous beverage throughout the ancient times.

In order to assure standards regarding quality, freshness, appearance and flavor, much regulation exists in Europe since the early XVIth century (“Reinheitsgebot” in 1516 in Germany; royal decree of 1495 in France …). Louis Pasteur, one of the most famous 19th century scientist, started his career by researching beer process improvement. Nowadays, with wide interest in the diversity and variety of beers, more than 6,500 breweries exist in Europe.

The quality standards for beer analysis are defined by the Central European Commission for Brewing Analysis (MEBAK) and the European Brewery Convention (EBC), representing technical and scientific interests of the brewing sector in European countries. These regulations include the determination of numerous elements (e.g. Arsenic (As), Calcium (Ca), Copper (Cu), Sodium (Na), Potassium (K) …), anions (such as nitrate and sulfite) as well as organic components (ethanol, glycerine) and others (pesticide residues) [1]. In order to maintain the highest level of quality, some chemical investigations have to be performed, using different analytical techniques to quantify all the potential contaminants.

Nowadays, the health effects of trace elements and the maximum concentration of trace elements in beers are controlled continuously. Determination of trace metals in beers is relevant as they may be essential or toxic in the human body, and also have an influence on the brewing process. The element distribution, however, shows significant differences based on the natural sources of soil, water, cereal, hops and yeast as well as anthropogenic sources such as environmental pollution and agricultural treatment by fertilizers, pesticides and fungicides.

Last but not least, the metal content in beer can be influenced during production, beer processing, conservation and bottling. This influence is greater than expected because during the beer-making process both raw and processed products are often in long contact with materials such as stainless steel, copper, glass and other equipment.

The determination of copper is important because high concentrations are disadvantageous to the colloidal stability and taste of the beer. The same goes for zinc, which is an essential trace element for yeast that influences metabolic processes such as protein synthesis and nucleic acid metabolism. Typical concentration levels of copper and zinc in beer are 0.2 mg/L [2].

Furthermore, the determination of arsenic, antimony, cadmium and lead is important because these elements are toxic when present in beer or the brewing water.

The source of these elements in beer and other alcoholic beverages could be the contamination of raw material or technological processes.

Arsenic is released into beer from a filtering material called Kieselguhr, or diatomaceous earth, which is used to remove yeast, hops and other particles and give the beer a crystal clear appearance. Diatomaceous earth consists of fossilized remains of diatoms, a type of hard-shelled algae that lived millions of years ago.

Diatomaceous earth finds wide use in filtering of beer and wine, and is an ingredient in other products as discussed by Professor Mehmet Coelhan from the Research Center Weihenstephan for Brewing and Food Quality [3]. 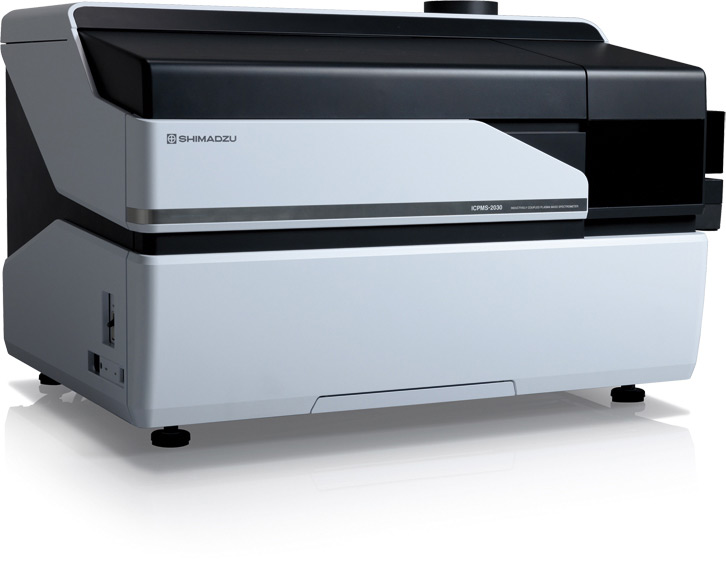 For simultaneous quantitative determination of the inorganic elements in beer, ICP-MS is the most preferable tool for quality control because of its high sensitivity (trace detection), wide dynamic range and high sample throughput. The Shimadzu ICPMS-2030 is an easy to operate and fast system meeting these requirements. Furthermore due to the unique Eco-Mode associated with Minitorch, ICPMS-2030 can drastically reduce running costs by as much as half.

The efficiency of suppression of interferences and enhancement of sensitivity is improved by a cooled cyclonic chamber and well controlled torch positioning. Moreover, ICPMS-2030 is able to save all mass issued from sample measurement. The development assistant of LabSolutions ICP-MS software can propose the optimum parameters for each element in the sample. Method development has never been easier and faster.

In the experimental work, five commercially available beers were evaluated: St. Bernardus Abt 12 from Belgium, and Becks Gold, König Pilsener, Erdinger and Bitburger Pils, all originating from Germany.

Thanks to the ICPMS-2030 system, analysis of beer could be performed without any sample preparation. All analyzed samples were degassed using only ultrasound. After this treatment, they were aspirated directly to the ICPMS-2030.

For each element studied, calibration curves include five points in the concentration range from 0.1 to 200 µg/L in a matrix-matched solution using 1 % nitric acid and 5 % ethanol.

Beer samples were measured in triplicate, and three of them were measured as quality control samples (Becks, König and St. Bernardus), spiked with 0.5 ppb, 5 ppb or 50 ppb resp., depending on the element concentration.

An internal standard solution in 1 % nitric acid (69Ga, 71Ga, 115In, 205Tl) was mixed online with sample, before being aspirated in the nebulizer. 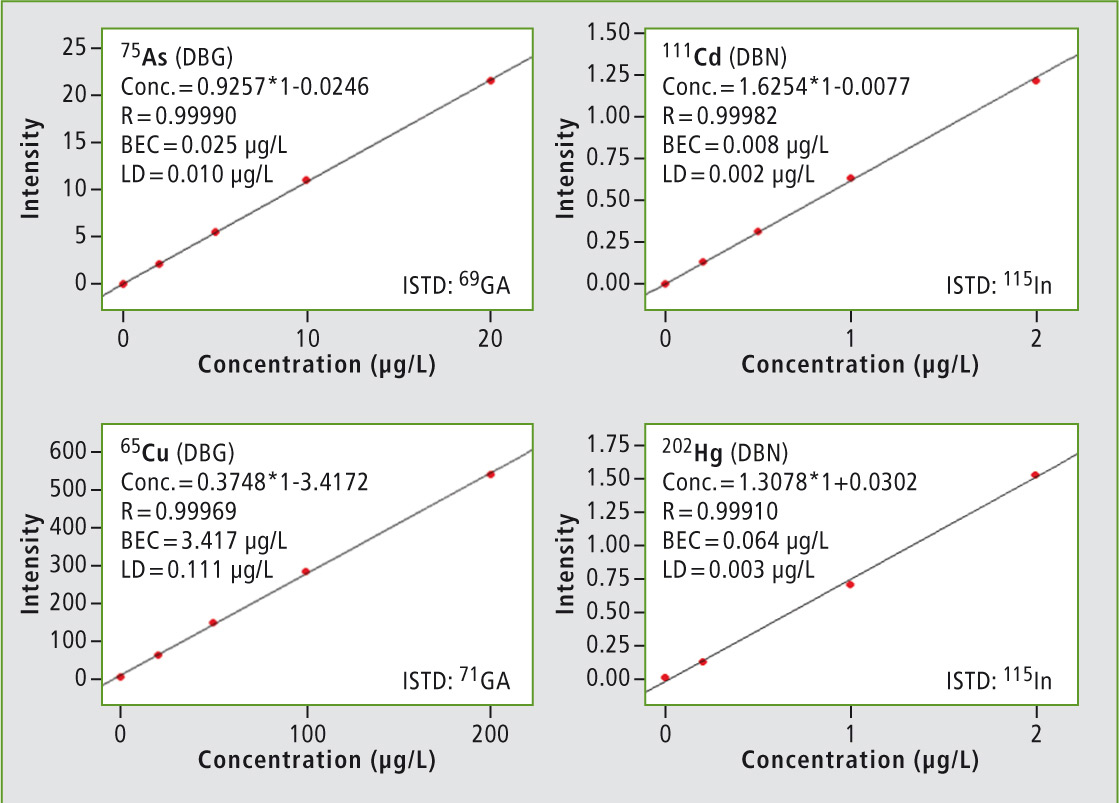 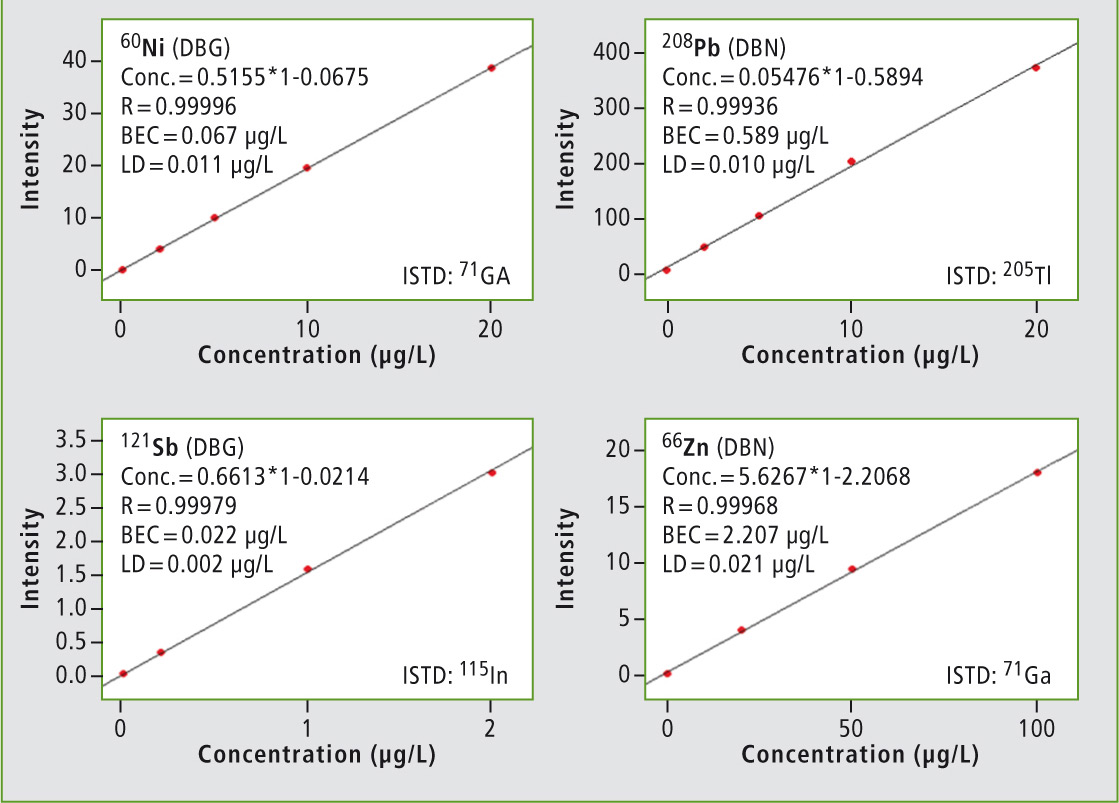 As shown in figure 3, all correlation coefficients r achieve a 0.999 level. Moreover, low values of detection limits (LD), calculated automatically by LabSolution ICP-MS software with 3s method, indicate the high suitability and ability of ICPMS-2030 for trace contaminant analysis. For each beer, results are summarized in table 2.

The quantitation results in table 2 demonstrate that ICPMS-2030 is able to simultaneously quantify the various elements present in beer samples.

In order to determine the method accuracy, three of five beer samples were spiked with each element (0.5 ppb, 5 ppb or 50 ppb). Results are shown in table 3 and calculated according to:

Beer is one of the favorite alcoholic beverages in European countries with a statistical per capita consumption of around 68 L.

Quality is therefore expected to be high and continuous quality control is essential. However, beer may contain a variety of heavy metals such as arsenic, lead and cadmium at low levels.

High-sensitivity analytical tools such as the ICP-MS are best suited to detect these low level contaminants to permanently ensure the highest quality of beer.