Volatile organic compounds have been the subject of many investigations. In the last years, there has been a strong research focus on the biological activities of organic volatiles. In this work, data concerning the antimicrobial activity as well as antiviral, anticancer and cytotoxic properties of selected sesquiterpenes and terpenoids (SQTs) and natural products rich in these volatiles is presented.

At first, the agar diffusion disc method was carried out with 6 mm paper discs and 6 µL of sample. After incubation of the bacteria at 37 °C for 24 h, the diameter of the inhibition zone (IZ) was measured. Afterwards, the agar dilution method was applied.

The test compounds were added to broth containing 1.0 % (v/v) Tween 80 at the appropriate volumes to produce final concentrations of samples in the range of 1 to 1,000 ppm. The concentration of pathogens in the medium exceeded 106-107 cfu/cm3. The agar plates were inoculated by pipetting 0.1 mL of the culture and 6 µL of the samples onto paper discs (6 mm) and were then incubated at 37 °C for 24 h.

By applying disc diffusion test, the Gram-positive bacteria as well as the Gram-negative bacterium Eschericha coli were inhibited by all essential oils and single compounds tested except cabreuva oil. For the Gram-negative bacteria, Pseudomonas aeruginosa (ATCC 9627 and clinical isolate) and Pseudomonas fluorescens could not be inhibited by any of the tested volatiles. The agar dilution assay, resulting in minimal inhibitory concentration (MIC), revealed that substance concentrations of 0.1 to 0.8 % of the tested volatiles and essential oils were necessary in order to achieve an overall reduction of bacteria. The Minimal Bacterial Concentration (MBC), defined as the lowest concentration of an agent that shows no evidence of microbial growth in the determination assay and which is also achieved by the agar dilution method, was between 0.2 and 1 % for the tested SQTs and essential oils. Detailed results are shown in tables 1-3.

Various organic volatiles were tested for their anti-tumor and antiviral potential, investigated on HeLa (human cervix carcinoma) cells. Jurkat E6.1 (human leukaemic T cell lymphoblast derived from a patient with acute lymphoblastic leukaemia) cells were included in the analyses to account for the possibility of cell-type specific activity of the samples investigated. Cellular toxicity of volatile compounds was tested using the CytoTox-96® assay according to the standard manufacturer’s protocol. The ED50 values were calculated by regression analysis of the dose response curves generated from the data.

All SQTs tested affected the viability of HeLa cells. A reduction of 50 % of HeLa cells, growing as a monolayer, was observed after applying nerolidol (natural and synthetic) and (E,E)-farnesol at concentrations (CC50) less than 5 µm. The CC50 of synthetic nerolidol in HeLa cells was almost ten times less than the effect dose required to achieve 50 % cytotoxicity of the cells (ED50). A similarity in the activity against tumor cells between nerolidol and farnesol could be attributed to their similar chemical structure. Tables 4 and 5 show detailed results. 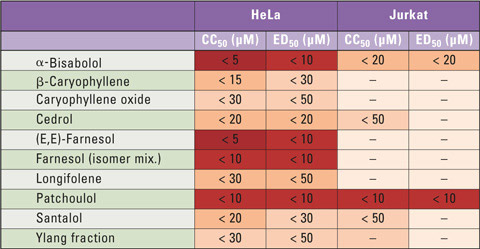 For virus infections, mouse polyomavirus (MpyV) strain A2 was used at the multiplicity of infection (MOI)5 plaque-forming units per cell. The titer of virus was estimated by immunofluorescence microscopy.

Together with a remarkable reduction on the viability of tumor cells, antiviral activity of selected volatile compounds could be demonstrated. The effective concentration (CC50) of natural nerolidol against mouse polyomavirus appeared to be more than ten times lower compared with the cytotoxic dose (ED50), the synthetic nerolidol showed a CC50 three times lower compared with the ED50 (see table 6).

Today, little is known of the cytotoxic properties of volatile aroma compounds. The in-vitro cytotoxicity of promising volatiles was evaluated on cell viability of HeLa cells. Curcumin, an active natural anticancer agent and Antimycin D, a well-established anticancer drug, were used as references.

The cytotoxic activity of volatile compounds within 24 h after the treatment was evaluated using the Cytotoxic Detection Kit. The influence of the tested volatiles on viability of HeLa cells was tested using cell Proliferation Reagent WST-1 after 24 h of incubation.

Among the volatile aroma compounds tested, the sesquiterpen alcohol (Z)-Nerolidol demonstrated the highest cytotoxic activity, comparable to the reference compound curcumin at a concentration of 15 µm. As a possible mechanism of the cytotoxicity of sesquiterpenes a direct interaction with the cell membrane, leading to altered permeability and cell death, is considered. Nerolidoles in particular may act as prospective agents for cancer chemoprevention. The other volatile compounds investigated (a-bisabolol, cedrol, santalol and patchoulol) were sufficient to achieve 50 % of cytotoxicity on the HeLa cell line in comparable concentrations as (Z)-nerolidol. Detailed results are shown in table 7.

Table 7: Cytotoxic activity – CCT50 = concenrtation required to achieve cytotoxicity of 50 %; CCP50 = concentration necessary to achieve a decrease in cytoproliferation by 50 %

A Shimadzu GC-17A with FID and a Shimadzu GCMS-QP5050 were applied for the qualitative and quantitative analysis of natural products rich in sesquiterpenes and terpenoids investigated in this study.