According to estimations (European Commission standardization mandate, M/425), carelessly unattended cigarettes cause some 14.000 fires every year in the EU, with 7,000 fatalities, 2,500 injuries and around 50 million euro of material damage. How can molecular gastronomy decrease the number of these accidents?

Spherification is one of many applications of molecular gastronomy which combine unconventional textures and flavors. It’s a process of turning liquid juice into juice-filled pearls. To produce these pearls some alginate – a substance derived from algae – is simply dissolved in a juice. Droplets of the juice are then dropped into a calcium water bath. The calcium from the water bath reacts immediately with the alginate in the juice to form a film around the droplet. Spheres of juice are thus created which look just like caviar (Figure 1). How is fake caviar related to cigarettes? 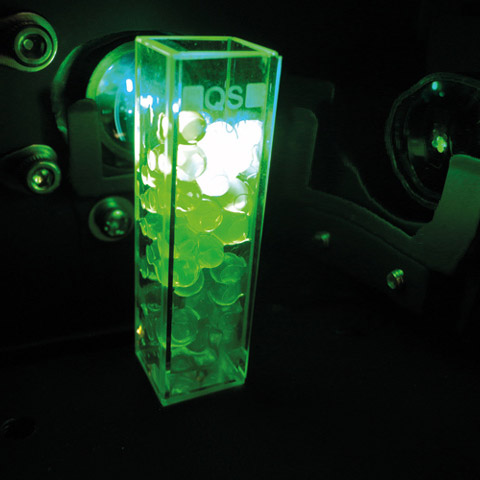 Figure 1: Alginate based Caviar prepared with fluoresceine excited with analytical wavelength of 460 nm in a Shimadzu fluorescence spectrophotometer RF-5301PC: it is fluorescent caviar filled into a 1 cm quartz cell

Fake caviar and its relationship to cigarettes

Cigarettes are a source of heat and therefore represent a fire hazard. They can ignite materials such as furniture or textiles. Self-extinguishing cigarettes can reduce the number of accidents compared to unattended cigarettes. These cigarettes are produced by adding two special retardant bands to the cigarette paper during manufacturing. These bands act as speed bumps by decreasing the flow of oxygen through the paper to the burning tobacco. They slow down the rate at which the cigarette burns as the lit end crosses over. They are more likely to self-extinguish. These speed bumps are made of a layer of alginate on the cigarette paper – the same alginate used for the molecular caviar. 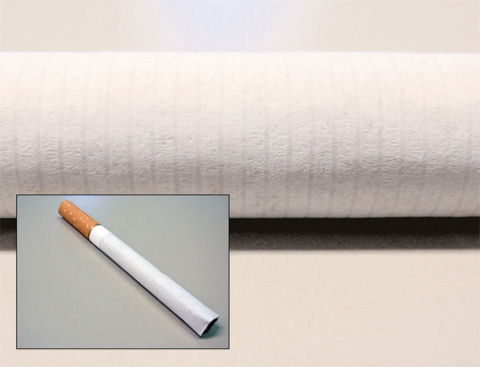 Figure 2: View of a cigarette and zoom onto one form of the cigarette paper. In this case the rings which help to burn the cigarette continuously are apparent.

A simple application of the FTIR spectrophotometer in combination with the single reflection unit demonstrates the differences of the materials. The single material spectra and the spectrum of the final paper layer are shown step by step. All significant components such as cellulose in the paper, sodium carbonate and alginate have broad signals in the infrared spectrum. All have in common the polysaccharide characteristics of the 6 ring structure in conjunction with -C-O-C- and the -OH bonded groups.

Figure 3: Structure of alginate acid base of the sodium alginate salt

The paper spectrum shows significant signals for the whitener of the sodium carbonate. These are a sharp signal at 700, at 900 and a broad signal at 1400 cm-1. This is reasonable based on the substructure of the carbonate group which generates two -CO- and one -C=O bonding constellation and also distribution of electrons over this bonding system, resulting in the broad signal at 1400 cm-1. In the literature, the symmetric valence vibration ϑsy (-COO-) is calculated as 1440-1360 cm-1. 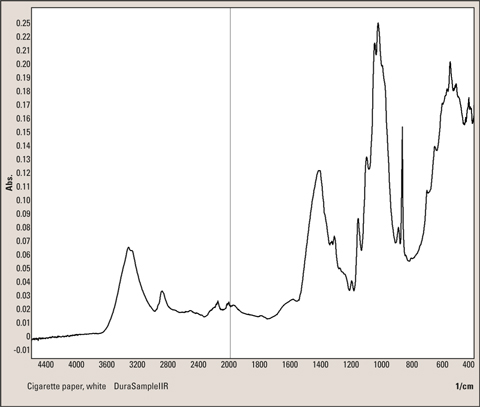 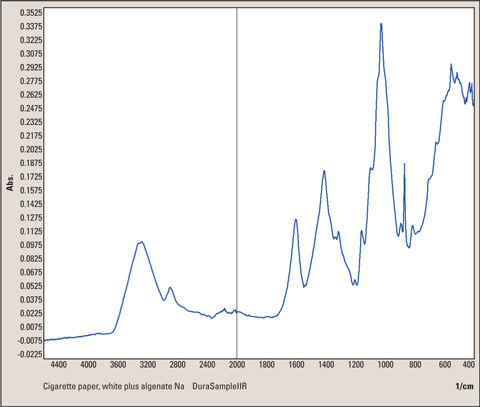 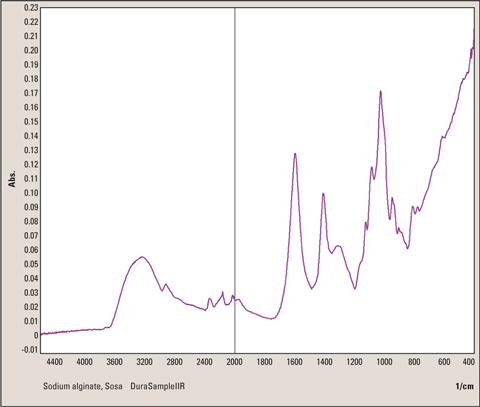 The spectrum of alginate on paper shows a mixture of alginate and paper. It is possible to differentiate between both spectra. Even though both materials are based on polysaccharide, they have differences in their molecular structure which are visible in the infrared spectrum. The signal at 1600 cm-1 is the -OH bonding in the huge molecules. When comparing the structure of the polysaccharides the different positioning at the ring systems generates the additional signal in comparison to the cellulose.