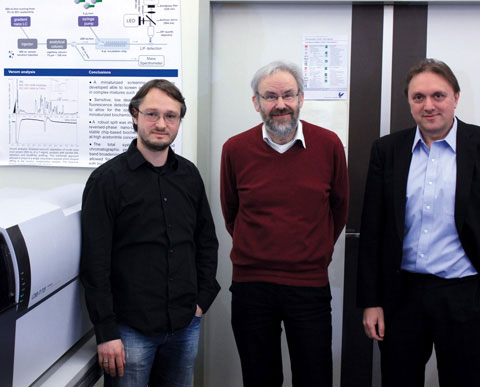 compared to NMR, only small amounts of the analyte are necessary
the technique can conveniently be coupled on-line to chromatography based separations (LC or GC)
more and more knowledge has been gained in the last decade about the fragmentation mechanisms of particular analyte classes, i.e. sugars, peptides or DNA/RNA molecules. The possibility to perform MS/MS or MSn experiments combined with high resolution MS instruments has especially been crucial for this development.

The following example shows the significance of the combination of LC-MSn capabilities and high-resolution spectral data with a Shimadzu LC-IT-TOF-MS instrument.

Finding new antibiotic substances is a key challenge as microorganisms are becoming ever more resistant to currently available treatments. Enhanced screening and identification techniques for bioactive substances from diverse sources therefore have to be developed and applied. At the VU University Amsterdam, on-line screening strategies are developed which can be combined with LC to assess bioactivity. In this case, the effect of single alkylation of neomycin at its different nitrogen atom sites on the antibacterial behavior of the formed derivative has been investigated [1]. The reductive alkylation of the aminoglycoside antibiotic neomycin with one equivalent n-octanal leads to the formation of six regioisomers (Fig. 1).

Figure 1: Reductive alkylation of neomycin. The alkylated derivatives have a single n-octyl chain on one of the six nitrogen atoms, as exemplified for N-2. Ring numbers (in the ring) and nitrogen numbers are specified.

The regioisomers were separated by reversed-phase LC, and differences in their antibacterial behavior were demonstrated [1]. In order to elucidate the compound structures an IT-TOF instrument coupled to LC was applied. A schematic overview of the system is shown in figure 2.

Figure 2: Schematic overview of the LC–IT-TOF-MS setup used in this study

In the first instance, all regioisomers displayed the same m/z value of 727.4448. This proved that the mono-alkylation actually worked. The performance of MS/MS still yielded identical fragment ions with m/z 564.3628 for all six regioisomers, rendering the different species so far indistinguishable. In MS3, the first differences between the six regioisomers could be obtained. At this stage, it could be deduced which of the three rings was alkylated. While a ring-4 alkylation caused two fragments with m/z 273.217 and 405.261, a ring-2 alkylation gave a fragment with m/z 275.233, and a ring-1 alkylation resulted in the formation of two fragments with m/z 273.217 and 435.317.

In summary: high resolution MS data allowed generation of the molecular formulae for the substances formed. MS/MS fragmentation, as would also be available on a Q-TOF instrument, resulted in the loss of one of the (unmodified) terminal aminosugars, thereby providing no insights into the molecular structures. MS3 experiments performed on the identical MS/MS fragments provided the first structural insights: it enabled assigning of the ring number at which alkylation took place. A summary of the fragmentation path up to MS3 is shown in figure 3. 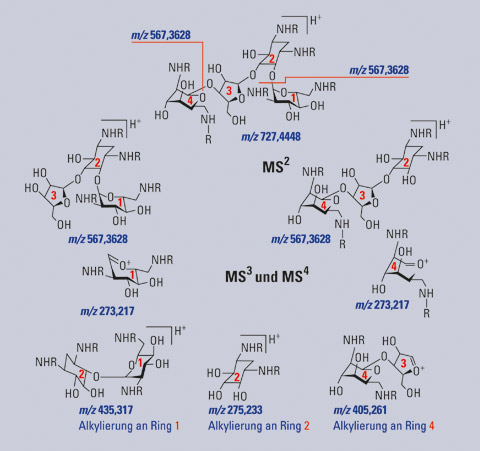 The final question to answer was: which nitrogen atom in the ring was alkylated? MS4 experiments on the fragment ion with m/z 275.233 (ring-2 alkylation) resulted in identical spectra, as expected due to the symmetrical structure of the N-1 and N-3 derivatives. For the other four regioisomers, MS4 experiments did lead to characteristic fragment ions and subsequently unequivocal assignment of the alkylated ring nitrogen atom.

High-resolution MSn experiments on an LC-IT-TOF-MS instrument can lead to a full structural assignment of closely related compounds. The assignment of the alkylated ring in the N-octyl neomycin derivatives was accomplished by investigating the subsequent cleavages of the glycosidic bonds. MS4 experiments were needed to fully assign the structures of four out of the six regioisomers. To assign the other two, preparative LC and subsequent NMR analysis would be needed.