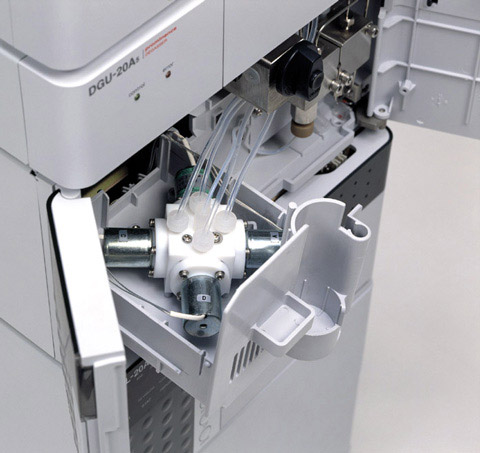 For Shimadzu’s Nexera system, Kaizen means that 18 months after its first launch, a series of modifications and new solutions increases the applicability of the Nexera family.

The quaternary gradient option has already been introduced and the flow range has been increased to a maximum of 10,000 mL/min. This has extended the range of use involving pumps for solvent mixing and semi preparative applications.

To ensure that the pumps work reliably as the backbone of the system, modifications have been made to the pump head, piston suspension and valves. While mostly not visible to the user, the reduced air bubble sensitivity and the improved lifetime are remarkable.

It’s all in the right mix

Gradient reproducibility and accuracy are crucial when fast gradients are applied to short columns. This requires as ‘perfect’ as possible choice of the most appropriate components of the mobile phase. The micro-reactors used so far with 20 µL and 180 µL (TFA version) have meanwhile been supplemented by a 40 µL and 100 µL version and the design of the 180 µL micro-reactor has been optimized to minimize baseline fluctuations caused by mixing. More choices, however, mean more ‘difficult’ decisions for the user as to which mixing volume represents the optimal solution for a specific application.

Autosampler as heart of the system

The heart of the Nexera system is and will be the autosampler. Fast and carryover-free injections have repeatedly been emphasized as its essential characteristics. In terms of changes, the major focus is on durability and maintenance-free operation, without overriding existing features or compromising performance.

Many laboratories already use the possibility to inject larger sample volumes. When installing a larger sample loop (max. 2.000 µL) in the system, it is possible to inject these larger volumes. However, flow rate, pressure range and column dimensions must be taken into account to prevent damage to the system and/or the column.

Depending on the application, the use of fixed sample loops is worth considering. System volume is reduced, resulting in shorter gradient run times and shorten equilibration time between the analyses. Considering about peak symmetry many advantages speak for this injection principle. One important point still remains, when talking about possible carryover from sample to sample: the user shall decide about the priorities for his/her application and system, as a generic answer cannot be given. 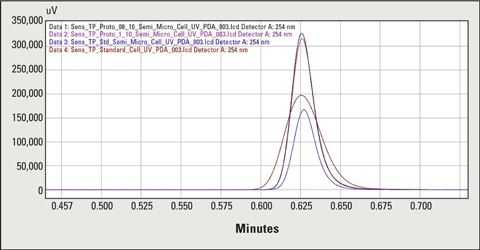 Figure 4: Comparison of the peaks obtained using the new flow cells versus the semi-micro flow cell

Detectors are the eyes of the system. Standard and semi-micro flow cells are supplemented by cells with higher sensitivity. These cells can be considered as midfield between the former two with respect to cell volume. A longer optical path compared to the semi-micro cell and a reduced diameter of the beam path compared to the standard cell in combination with stronger focusing, allow greater sensitivity. Two additional cells are available for the UV detector and one additional cell is available for the photodiode-array detector. 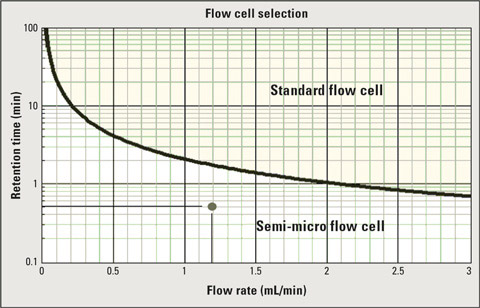 What is the optimal flow cell for a particular application? The Nexera system guide supplied with the system can provide an initial answer. Even if the new flow cells are not yet specified, users are provided with a guideline stating which cell under which conditions would be the optimum choice.