Occurrence of endocrine disruptors in foods 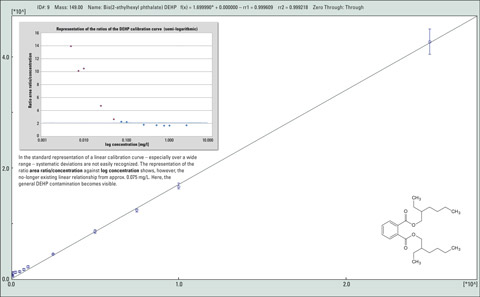 Figure 1: Calibration of DEPH (diethylhexyl phthalate) within the range of 5 pg/µL – 2500 pg/µL 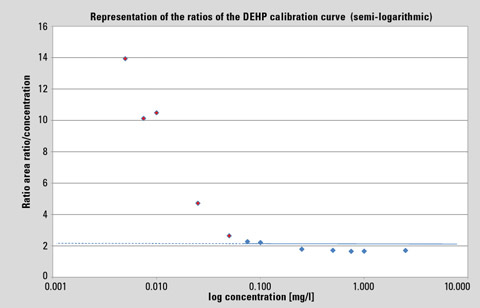 In the standard representation of a linear calibration curve – especially over a wide range – systematic deviations are not easily recognized. The representation of the ratio area ratio/concentration against log concentration shows, however, the no-longer existing linear relationship from approx. 0.075 mg/L. Here, the general DEHP contamination becomes visible. 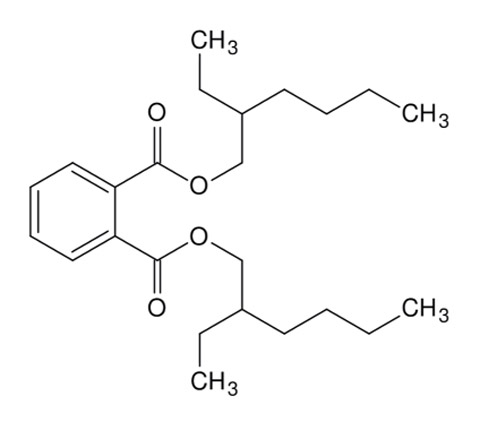 Plastics such as polyethylene, polypropylene and polyvinyl chloride are long-chain polymers. In addition to the chemical composition of the polymer, its desired properties also depend on the admixture of additives. The most widely used additives are plasticizers such as phthalates, bisphenol A and nonylphenol.

Table 1: Content of phthalates, bisphenol A and nonylphenol in a cola-flavored soft drink in a polyethylene (LD-PE) bottle (excerpt from analysis report)

This group of plasticizers contains substances with hormone-like properties. These endocrine disruptors are considered as critical due to their ability to migrate and their toxic potential. It is therefore important to keep any contamination with endocrine disruptors as low as possible for risk groups such as infants, children, adolescents and pregnant women (ALARA principle*). An overview of the tolerable intake levels of the main phthalate DEHP – diethylhexyl phthalate – is presented in table 2. 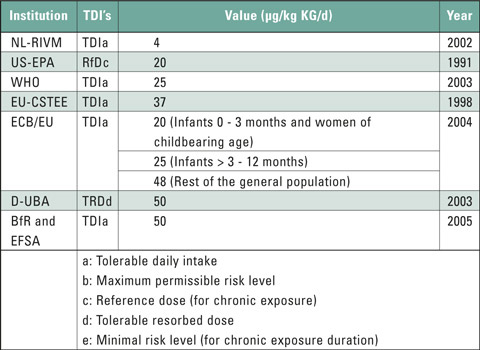 The phthalic acid esters (phthalates) mainly used as plasticizers are found in paints, varnishes, adhesives, plastics, gaskets, cosmetics, toys, packaging and in medicinal products – to mention just a few. Due to the large-scale use of phthalates in all types of plastics, many of these compounds are ubiquitous. In house dust they have been detected repeatedly [1, 2].

To detect an increased phthalate contamination, its concentration is determined using analytical instrumentation. For many application areas, appropriate testing procedures have been described and are required by law (e.g. EPA 506 (5), DIN EN ISO 18856:2005 for water analysis).

For instance, PVC (foils, flooring) often contains 20 % to 30 % plasticizers. They can be considered as main components. Analysis using FTIR-ATR and GC/MS is easy. The ubiquitous occurrence (such as DEHP) hardly affects the result, as a contamination is only expected in trace-amounts and this is, in the double-digit percentage range, negligible.

Other plastics, such as PET (polyethylene terephthalate) should not contain any phthalates. Due to improper recycling, however, thermal stress or migration from the imprint, phthalate contamination cannot be excluded. These are mainly trace-amounts that may be released into beverages such as mineral water or juices. After consumption they can be incorporated into the body. Table 1 shows the analysis results of a study on a commercial cola flavor soft drink. Several phthalates could be detected in trace amounts. The analytical determination was carried out using GC/MS after sample preparation. The small amount of analyte requires a high sensitivity of the instrumental system. The combination of Shimadzu’s GC-2010 Plus with the QP-2010 Ultra MSD easily meets this requirement.

Figure 1 shows the ubiquitous presence of the phthalate DEHP using a calibration curve. The linear range of the detection method is limited by the carry-over of trace components in the lower concentration range, despite the use of high-purity grade laboratory chemicals. Special precautions during sample preparation as well as in the selection of materials and laboratory chemicals are therefore needed to prevent erroneous measurements as much as possible.

In the usual representation of a linear calibration curve – particularly over a wide range – systematic deviations are hardly recognizable. In contrast, the representation of the ratio area ratio/concentration against log concentration in figure 1 shows that a linear relationship is no longer present from approximately 0.075 mg/L. Here, the overall DEHP contamination becomes evident. The detectable unilateral deviations from the horizontal that can be determined in the lower concentration range are caused by the “blank content.”

Strategies for the prevention of phthalate contamination

In principle, the determination of phthalates in trace quantities requires the use of phthalate-free instruments and materials – usually glass and aluminum [3]. These materials can be cleaned easily using thermal decontamination [4].

Suitable methods have been described in the DIN EN ISO 18856:2005 standard. Solvents must be tested prior to use to determine if they are free from phthalates. Septa and liners must meet these requirements as well. Additional measures such as silanization (hexamethyldisilazane) also help in reducing the measurement uncertainty. By using fast GC, multiple determinations can be realized within short analysis times (see Fig. 2). 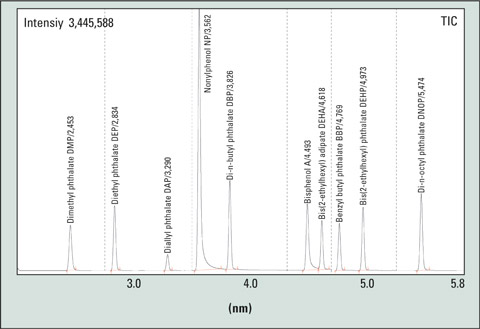