The study of the volatile fraction in wine products has become more important, as these compounds make a major contribution to the consumer’s overall perception of the quality of particular food and drink products.

To improve the gustatory and olfactory properties of grape wines or give them certain characteristics, wine aromatization is often carried out illegally by adding different flavored substances of both plant and synthetic origin. The usage of any type of flavored elements, including those of synthetic origin, for natural wine production is prohibited by EU and RM legislation (INVV in the Republic of Moldova, 2008).

The objective of this research was to compare the efficiency of various analytical injection techniques used to detect the additives with flavoring potential in wine.

Research materials:
For the analysis, raw material white and red wine were used, to which were added aroma of “Muscat” to the raw white wine and “Isabella” to the raw red wine from industry in the recommended ratio (1:10,000). Comparative analysis of the composition of raw material wine and of the “variety” wine was subsequently carried out using headspace (HS) and headspace solid phase microextraction (HS-SPME) GC/MS.

The Laboratory apparatus:
All tests were carried out using Shimadzu’s GCMS system equipped with the three-dimensional automated system for sample injection (AOC-5000) (Figure 1). 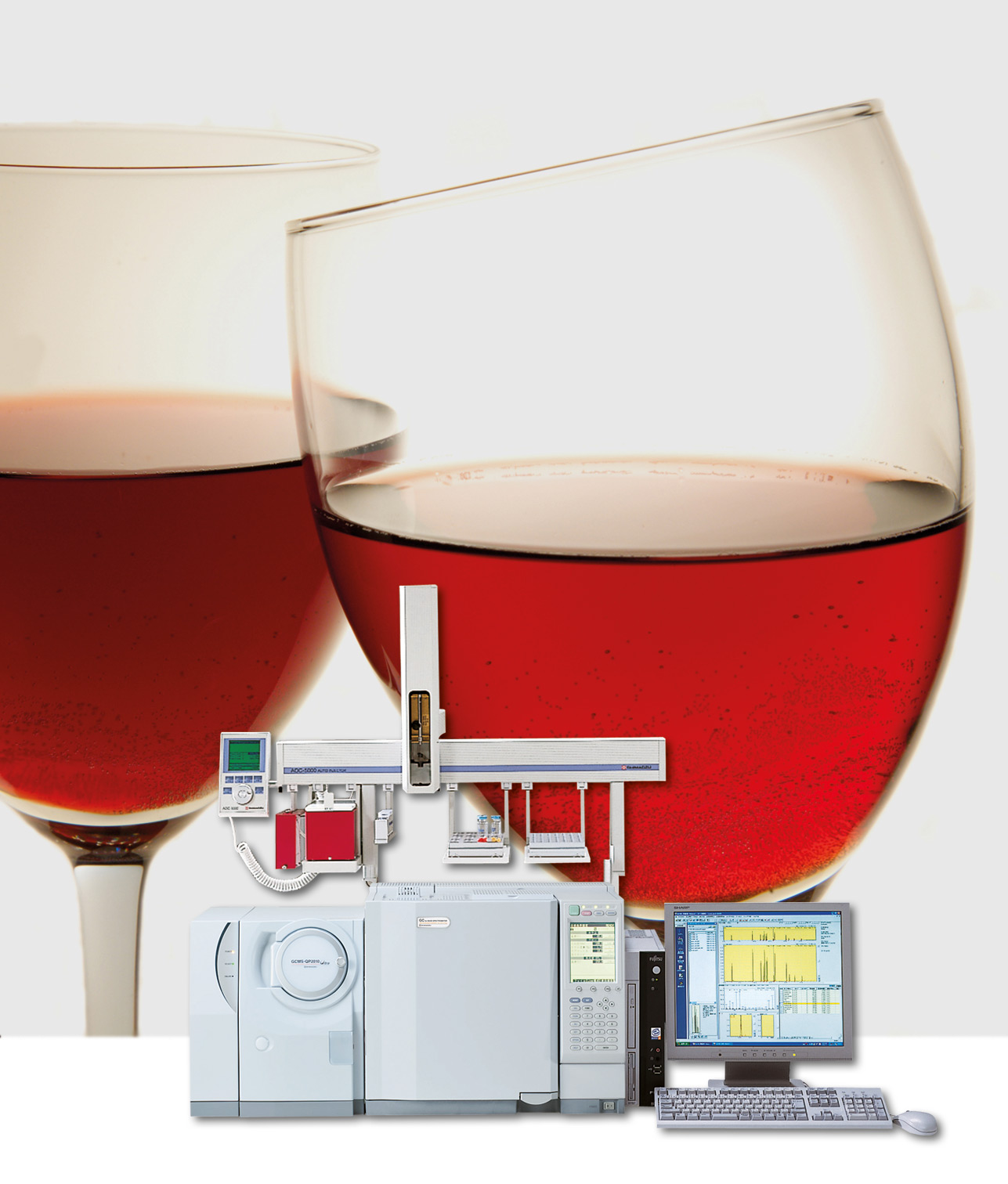 Applied method:
20 mL vials were used, into which 10 mL of sample and 4 g of NaCl were administered. For the SPME a 100 µm Carboxen-PDMS fibre was applied, providing the extraction of volatile and semi-volatile compounds in a concentration range from tenths of ppb up to tens of ppm. For the identification, the general library of NIST mass spectra and the FFNSC 1.3 were used; the latter was particularly developed for flavors and fragrances (available from Shimadzu Europa GmbH).

Comparison of raw white wine with the “Muscat” wine:
The presence of a range of monoterpenes (C10H16) was identified: beta-myrcene (2,6,7-octatriene), p-cymene, D-limonene, beta (Z, E)-ocimene and terpineol. All of these monoterpenes were identified in grapes of flavored varieties (Sanchez-Palomo, 2005), although these are formed in insignificant amounts and are not of interest in the olfactory field. At the same time, they are part of the composition of essential oils extracted from exotic and flavored plants:

As the purpose of this research was to compare the sensitivity of the analytical methods, the raw material wine as well as the “Muscat” wine were analyzed using HS-SPME (Figure 3). In addition to the compounds detected by the HS (headspace) GCMS, some monohydroxy terpenic alcohols were reported as terpineol, and 1-terpinen-4-ol. The presence of these compounds with flavoring potential, although in insignificant quantities, demonstrates the natural origin of the used aroma (essential oils) for the “Muscat” white wine. 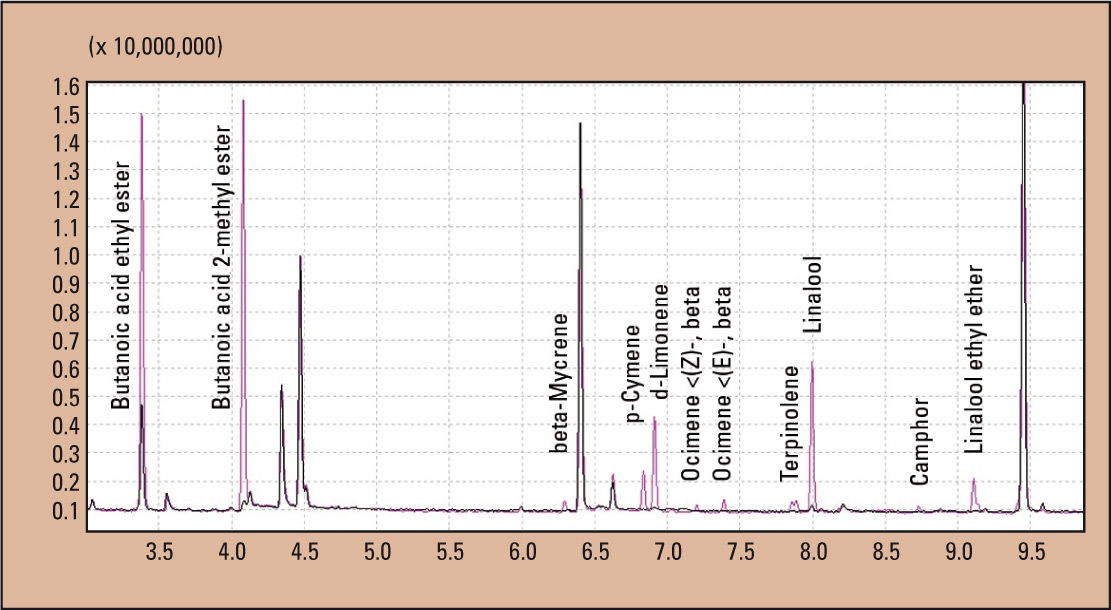 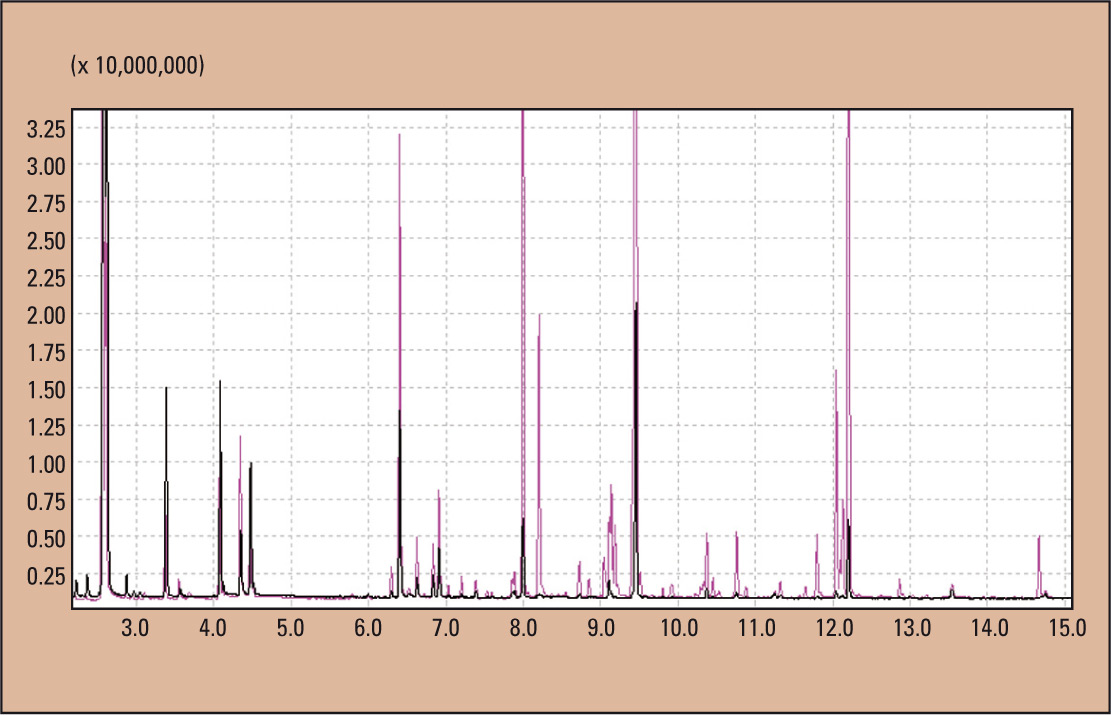 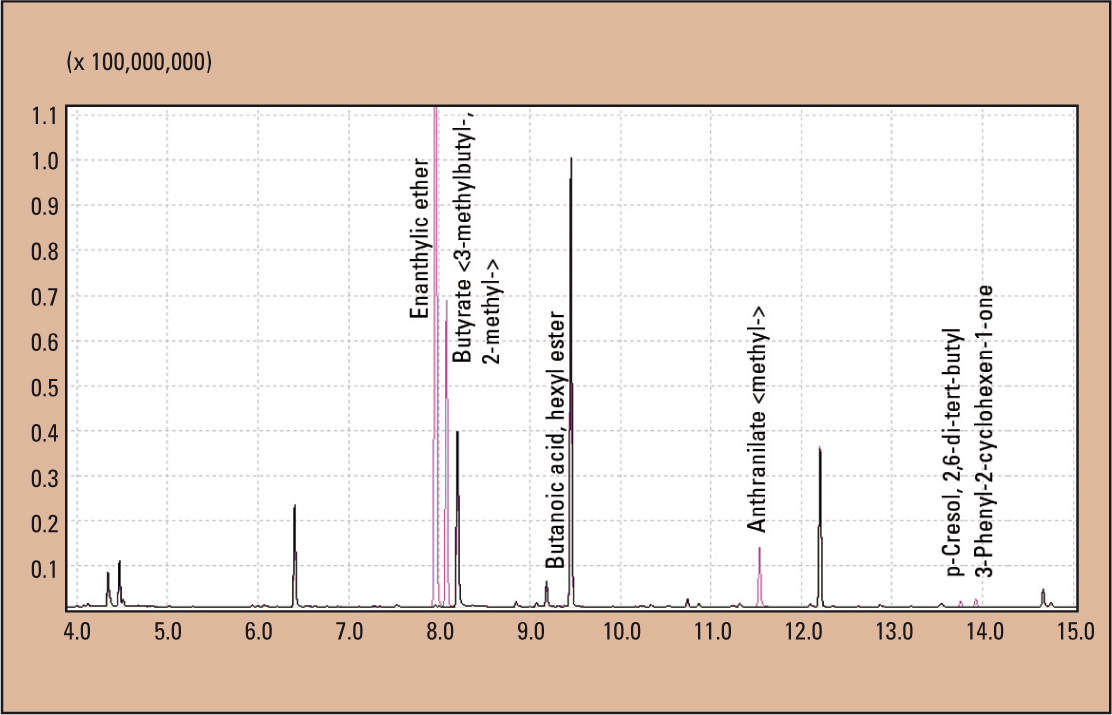 Comparison of raw red wine with the “Isabella” wine:
The presence of methylanthranilate (a component of the primary flavors of American hybrid grapes) is confirmed. The abundance of this trace is prevalent among registered flavoring components.

Two significant traces of enanthylic ether and butyrate <3-methylbutyl, 2-methyl-> were recorded – two chemicals of synthetic origin with pineapple flavor (enantilic ether) and fruit caramel (butyrate <3-metylbutyl-, 2-methyl->). The hexylic ester of the butanoic acid, present in extremely low quantity (pineapple flavor) can be of synthetic origin, but it is also detected in the composition of natural wines (Form No. 203-821-270 3/08, 2008).

The presence of the p-Cresol, 2,6-di-tert-butyl compound, an antioxidant agent of synthetic origin, restricted to food products, demonstrates the synthetic origin of the aroma concerned. This compound, which manifests allergic effect and is suspected to be carcinogenic, is not part of the flavoring compounds, but is included in the composition of the synthetic aroma due to its antioxidant effect. 3-phenyl-2-cyclohexene-1-one also represents a synthetic compound that could be used as a solvent for p-Cresol, 2,6-di-tert-butyl.


It is relatively easy to detect the origin of the aroma. In the case of the naturally identical, the presence of a greater number of traces characteristic of substances with flavoring potential, was detected. The number of components bearing flavoring potential was lower for synthetic aroma (only five components bearing flavoring potential were found), while other two chemical having nothing in common with flavoring substances but fulfilling various functions were also recorded.
The research demonstrated that the use of GC/MS with sample injection by HS method and with the HS-SPME can be successfully applied to identify the aromatic profile of wines, in order to detect wine counterfeiting (using nature identical and synthetic aromas).
The GC/MS method with sample injection by the HS-SPME provided a higher sensibility than the method of samples injection by application of HS technique.