Automatic quantification of doxylamine and diphenhydramine in human plasma

TOX.I.S. supports automated and quantitative determination of drugs in plasma

Acute poisoning is an emergency situation calling for immediate, unequivocal and reliable detection and determination of the concentration of foreign substances in blood in order to establish the correct treatment for the patient. Continuous availability of analytical instrumentation for toxicological analysis is therefore essential. In addition, the competitive advantage of a laboratory is dependent on a high analytical-technological capability.

In general, analysis is carried out on serum or plasma samples, as these are easily withdrawn from an unconscious person. Moreover, the concentration of active substances in blood is more easily correlated with the clinical presentation of the patient than with the concentration in urine. For active compounds at low concentrations or with a short half-life in blood, urine analysis can also provide valuable information on the condition of the patient (1), (2).

Urine is the sample material of choice for drug analysis, as the concentration of foreign substances remains detectable in high concentrations for days (3). In the TOX.I.S., toxicological identification system, (1) an additional method for quantitative determination in plasma has now been integrated. The method was developed at the Institute for Toxicology in Berlin, Germany (BBGes) in the working group of Dr. Grobosch in collaboration with Shimadzu. This article describes the applied methodology and presents examples of two poisoning cases.

Doxylamine (DOX) and diphenhydramine (DPH) are first generation competitive histamine H1-receptor antagonists with anticholinergic, hypnotic, sedative, local anesthetic and antitussive properties (4), (5). They are available without prescription, are immensely popular in the drug scene and rank among the most common causes of acute poisoning. DOX and DPH are prescribed for sleep disorders and are often purposely taken in suicide attempts (6), (7). The effective daily dosage for DPH is between 30 and 100 mg (8) and for DOX between 25 and 50 mg (9). The lethal dose for DPH and DOX is 40 mg/kg (10) and 25 – 250 mg/kg (11) respectively. A combined intake with alcohol, cocaine, morphine, barbiturates, benzodiazepines or DPH leads to synergy effects (12), (13). The critical concentration in plasma for DOX is specified as 3 mg/L and for DPH as 5 mg/L (14).

DPH is strongly bound to plasma proteins (85 to 99 %). The distribution volume is 3 to 4 L/kg (16). Metabolism is mainly carried out in the liver (CYP2D6, CYP1A2, CYP2C9 and CYP2C19 [17]). DPH is first dealkylated to mono and didesmethyl-diphenhydramine, subsequently oxidized to diphenylmethoxy acetic acid and further conjugated to glutamine and glycine (Figure 1). DPH is eliminated mainly via the kidneys (approximately 60 % within 96 hours in the form of its metabolites) – a maximum of 1 % of the active compound appears unchanged in the urine (18), (19). The specified average elimination half-life is four (2.4 to 9.3) hours (16). 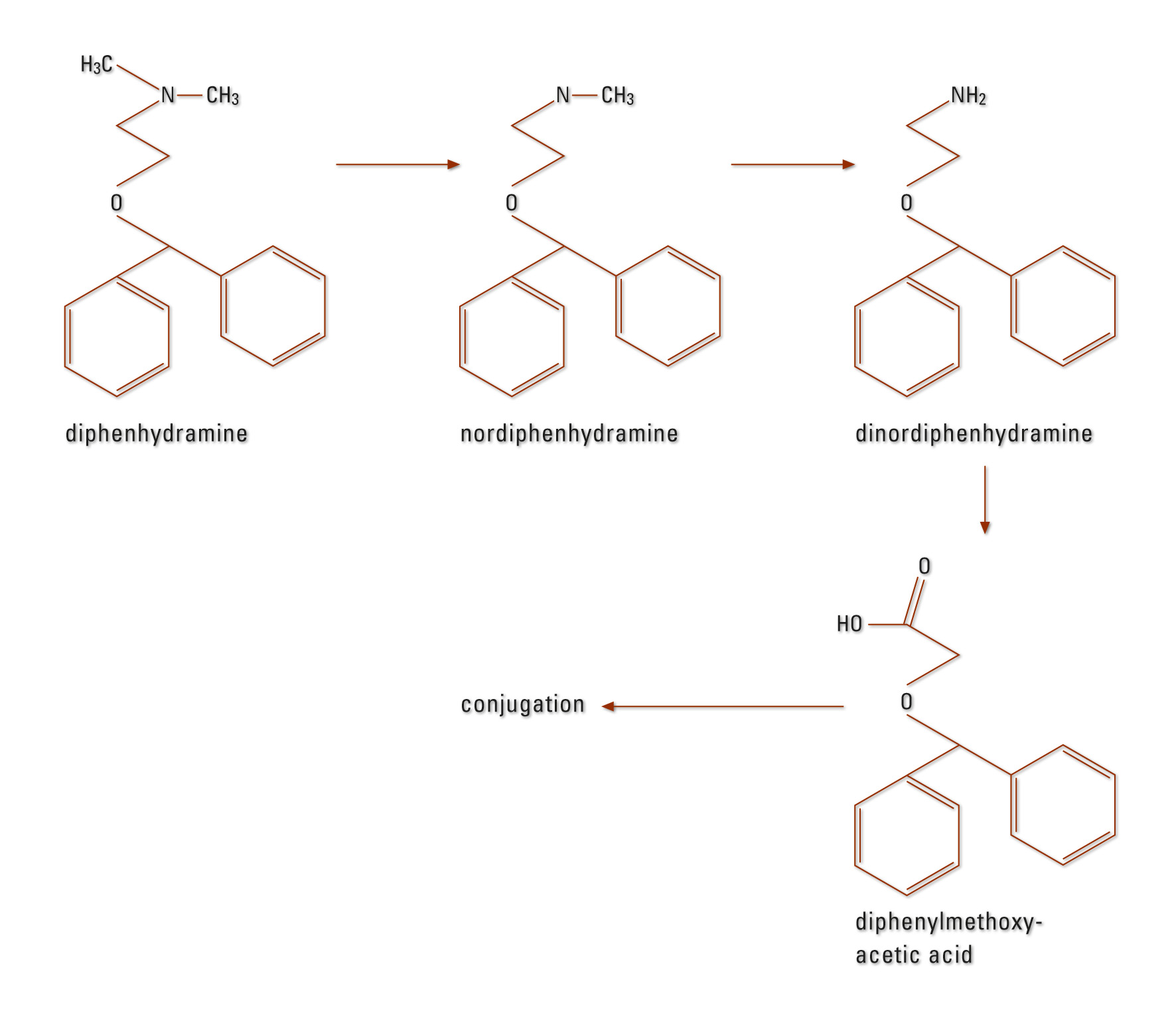 DOX metabolism occurs primarily in the liver. N-desmethyldoxylamine, N,N-di-desmethyl-doxylamine and their N-acetyl-conjugates were detected (Figure 2) (20), (21). The elimination half-life is approximately ten hours (21).

A 28-year old male (185 cm, 85 kg) was admitted to hospital with clinical symptoms of alcohol intoxication. His face and hands were reddened. Poisoning by drug intake was not ruled out.

A 41-year old woman (170 cm, 65 kg) was admitted to hospital in a confused mental state with involuntary movements. The woman was suffering from depression. A rapid urine test carried out in the hospital was positive for tricyclic antidepressants.

Materials and methods, chemicals and standards

The toxicological identification system TOX.I.S. is configured as follows:

An SPE type (RECIPE) column was used for solid-phase extraction. SPE buffer, mobile phase A, mobile phase B and SPE rinsing solution can be obtained from RECIPE.

300 µL of the internal standard in methanol was added to 200 µL of a plasma sample. The mixture was subsequently shaken for five minutes at 2,000 r/min and centrifuged for four minutes at approximately 14,500 x g. The supernatant (300 µL) was transferred to a new 1.5 mL-Eppendorf cup and diluted with 1.0 mL SPE buffer.

Chromatographic separation was carried out on an analytical column with a precolumn of the same type, both from RECIPE. Gradient elution was carried out by variation of the mobile phase flow rate (0.6 and 2.0 mL/min). The column temperature was 40 °C, the UV detection wavelengths were 230 and 205 nm, and the injection volume was 1.0 mL. Analysis (including extraction) took place within 45 min.

A drug substance is considered to be reliably identified when its relative retention time is at least 95 % and spectral comparison has been shown to be at least 99 % in agreement with the library. To calculate the concentration, the following equation was used:

The first experiments based on omitting the methanolic precipitation step, led to a comparatively low lifetime of the extraction column (< 25 injections). Only by using methanol to precipitate plasma proteins could the lifetime be increased to 500 injections per extraction column. At the same time, the quality of the chromatograms was markedly improved, as fewer matrix peaks appeared. For the identification of unknown substances, an in-house library, currently containing approximately 500 UV spectra with RT and RRT, as well as a commercial UV spectral library (UVTOX of Prof. F. Pragst containing > 3,000 entries) was available.

The calibration curves for DOX (y = 67.25x) and DPH (y = 25.18x) exhibit good linearity with correlation coefficients > 0.999. The upper and lower limits of determination for DOX and DPH are suitable for the quantitative determination of both substances within the scope of toxicological analysis (Table 1).

Table 1: Therapeutic and critical concentrations, operating ranges and limits of determination for DOX and DPH

In case 1, analysis of plasma samples via HS-GC could not establish alcohol poisoning (c < 0.03 g/L), contrary to initial suspicions. Using TOX.I.S., caffeine and hydrocortisone, as well as 3.24 mg/L DPH could be detected (Figure 3). The patients’ symptoms such as facial reddening as well as dysphasia and coordination disorders, in combination with a DPH concentration in the upper therapeutic range, could be attributed to taking DPH. In addition to DPH, its main metabolites dinordiphenhydramine and nordiphenhydramine could be detected qualitatively (Figure 3). 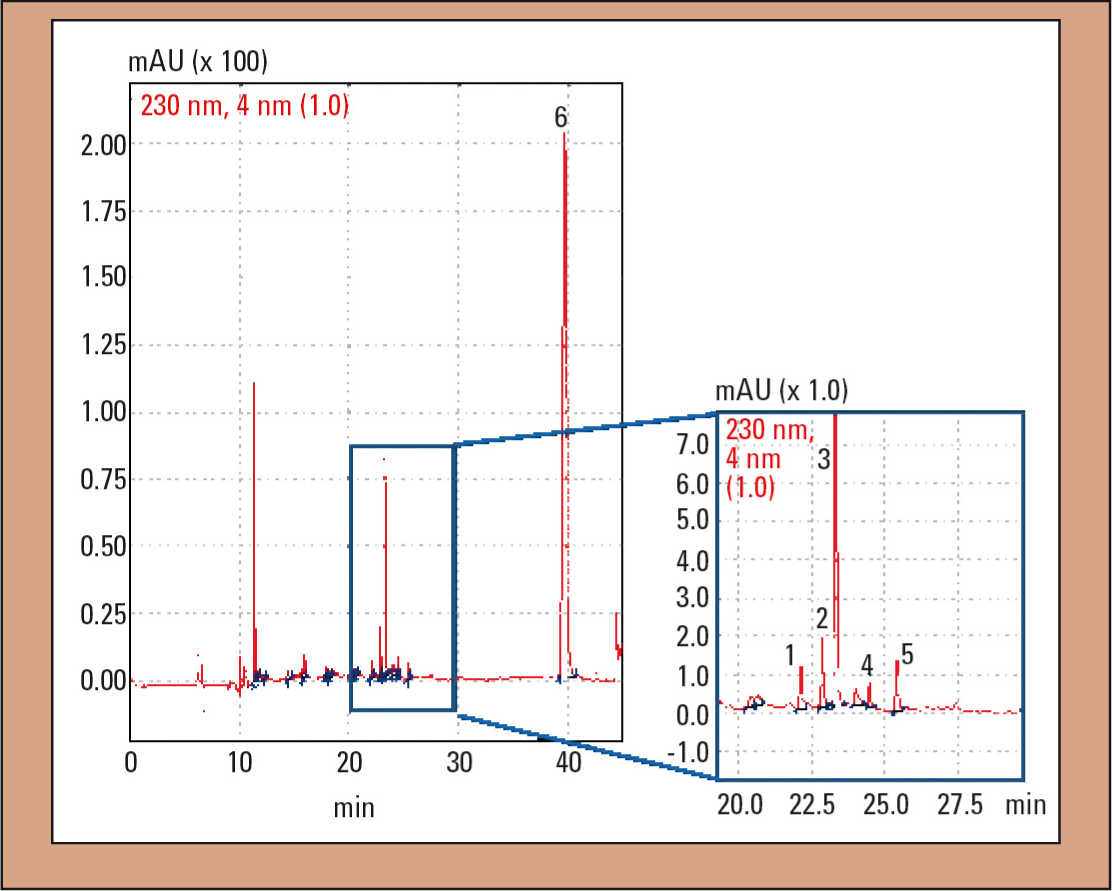 Aderjan et al. point out that in severe and deadly intoxications, a ‘three-peak pattern’ consisting of dinordiphenhydramine, nordiphenhydramine and DPH can occur in the chromatogram (8). In addition to the substances mentioned, diphenhydramine-N-oxide (Figure 3, peak 4) was found in the plasma sample. Slikker et al. found that the metabolite profiles of DOX in plasma and urine are similar (22). Diphenylmethoxyaceticacid cannot be extracted from plasma due to the selected extraction conditions.

In the second case, DOX as well as nordoxylamine and DPH were identified in the plasma sample (Figure 4). Concentrations were < 0.25 mg/L (DOX) and 0.29 mg/L (DPH) and were therefore in the lower therapeutic range. In addition, amitriptyline, nortriptyline and five unknown amitriptyline metabolites more polar than their parent compound amitriptyline, could be identified. 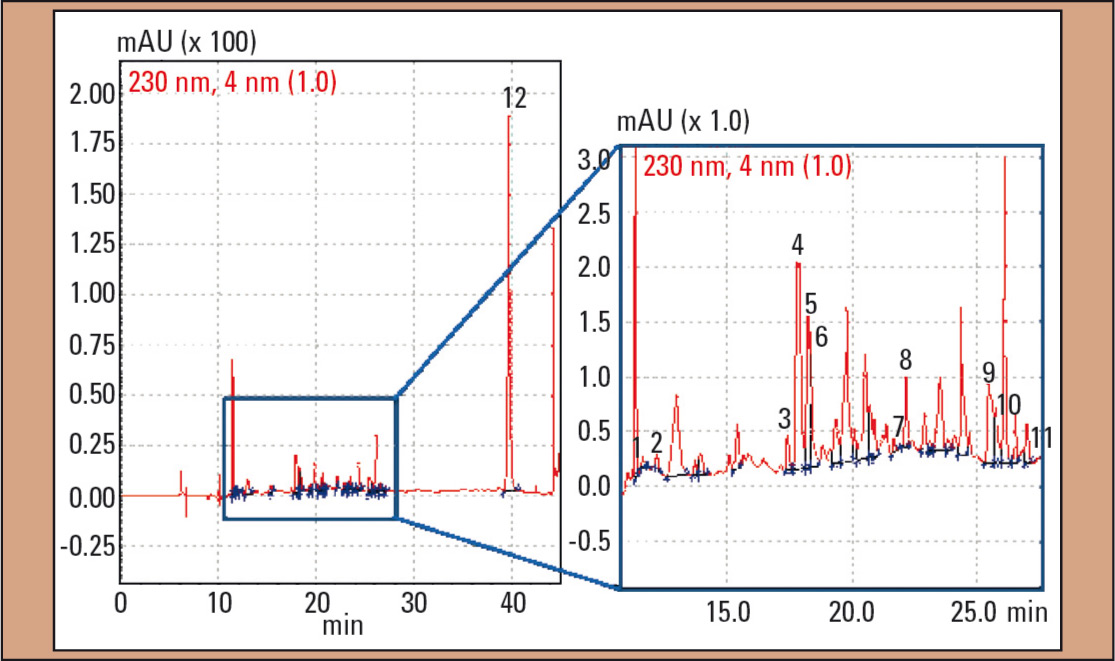 The new TOX.I.S. method for the determination of drugs in plasma, developed by the Institute for Toxicology Berlin, Germany in collaboration with Shimadzu, has been described by discussing two poisoning cases. The advantage of this method is the straightforward but efficient sample preparation as well as the automated identification and quantification of foreign substances in plasma. For the identification of foreign substances, a UV spectral library containing approximately 500 entries (RT, RRT) as well as the UVTOX commercial UV spectral library (> 3,000 entries) of Prof. F. Pragst is currently available. The substances stored in the UV spectral library contain the most commonly used drugs (for instance tricyclic antidepressants, benzodiazepines, etc.) with weakly acidic, neutral and basic properties as well as some of their metabolites.