Analysis of fatty acids in foods 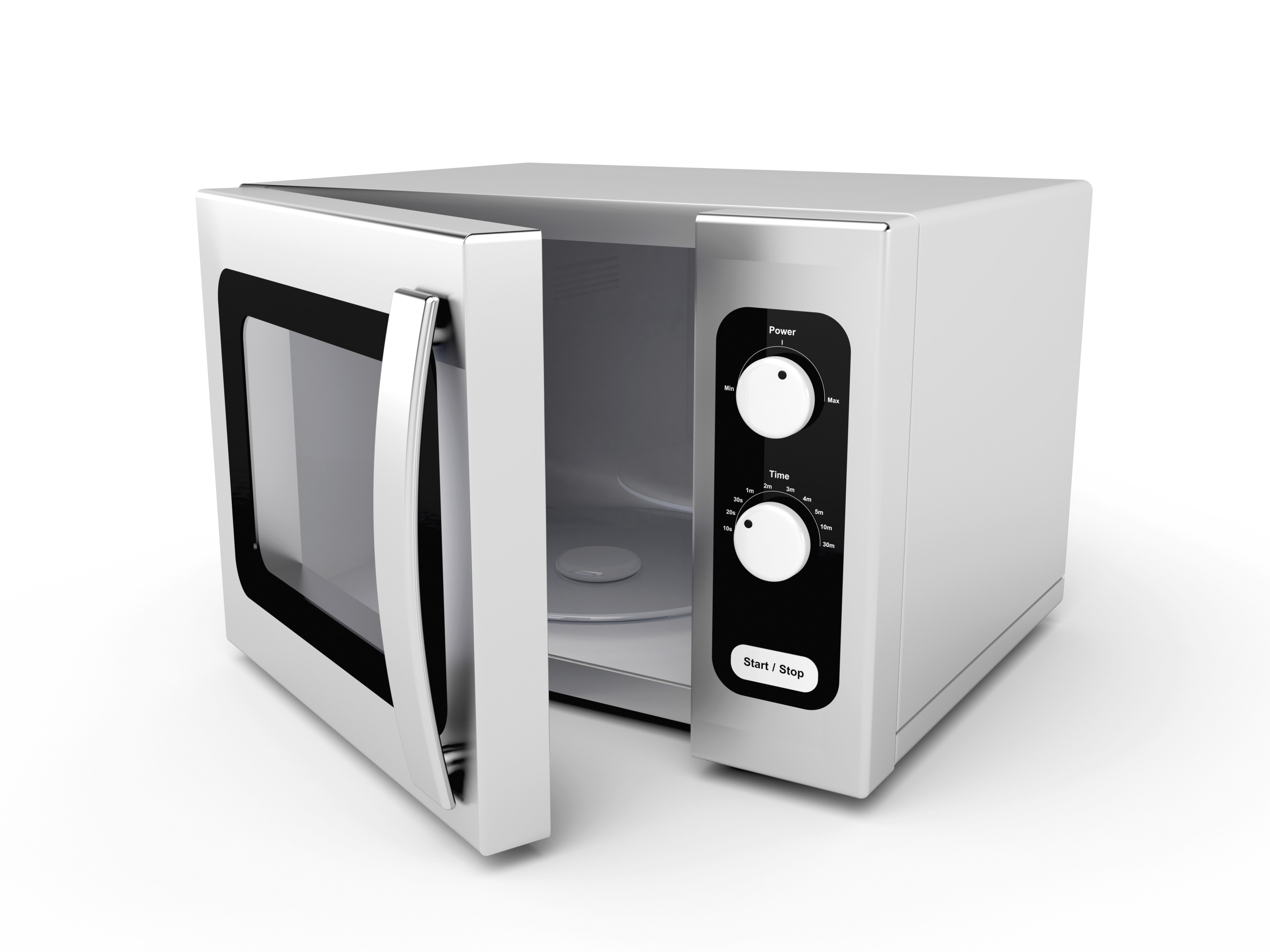 The EU regulation on the provision of food information to consumers (No. 1169/2011) [1] requires all food manufacturers to label their products with information on the content of saturated and unsaturated fatty acids. The new regulation aims to provide more transparency to consumers so that they have a sound basis for making a decision on whether or not to buy a product.

Analysis of fatty acids is based on determination of the total fat content using the Weibull-Stoldt method (ISO 8262-1 [2]), followed by derivatization of the fatty acids to volatile fatty acid methyl esters (FAMEs) according to ISO 12966-2:2011, and their GC analysis according to ISO 12966-4:2015 [3]. The ISO standards form the basis of a new method recently developed at the University of Applied Sciences in Krefeld, Germany that uses microwave-assisted extraction and analysis of saturated and unsaturated fatty acids. This method has already been presented in the journal Chromatography Today 5-6/16.

Figure 1: Recovery rates of the total fat contents of all food samples investigated; the milk powder and chocolate are certified reference materials. For the other samples, a reference value was determined with the ISO method.

Whereas the ISO method determines total fat by means of digestion in hydrochloric acid followed by Soxhlet extraction, the microwave method involves simultaneous digestion and extraction of the lipids. The microwave used for this was a Discover SP-D® instrument manufactured by the German-based CEM company.

Total fat contents of the reference materials investigated – milk powder and chocolate – were recovered completely. All non-certified samples also gave very good recovery rates of > 90 wt.-% total fat with standard deviations between 0.6 and 3.7 wt.-%. This clearly demonstrates that successful determination of the total fat in real samples using the microwave method is matrix-dependent.

In particular, the homogeneity of the sample influences the completeness of the extraction. This especially affects foods such as potato chips and infant formula powder due to their inhomogeneity or to the complexity of their composition. The recovery rate of these samples can be increased by approx. 15 % by means of repeated extraction (cold). These steps are carried out with fresh solvent after digestion. As a compromise between complete recovery and required analysis time and consumption of chemicals, three extraction steps were carried out for each analysis.

Figure 2: Plot of the fat extracted per extraction and increasing recovery rates (RR) for the extraction of a salmon sample using the microwave method

Figure 3: Required time and consumption of chemicals for a single total fat determination using the microwave and ISO methods

The actual analysis of fatty acids is carried out using gas chromatography. With respect to required time and consumption of chemicals, the new microwave derivatization is very similar to the general methods described in ISO 12966-4. An alkali- and an acid-catalyzed derivatization step are each carried out to convert both bound and free fatty acids to FAMEs. Parameters used for GC analysis of the FAMEs with a GC-2010 Plus from Shimadzu are summarised in table 1. 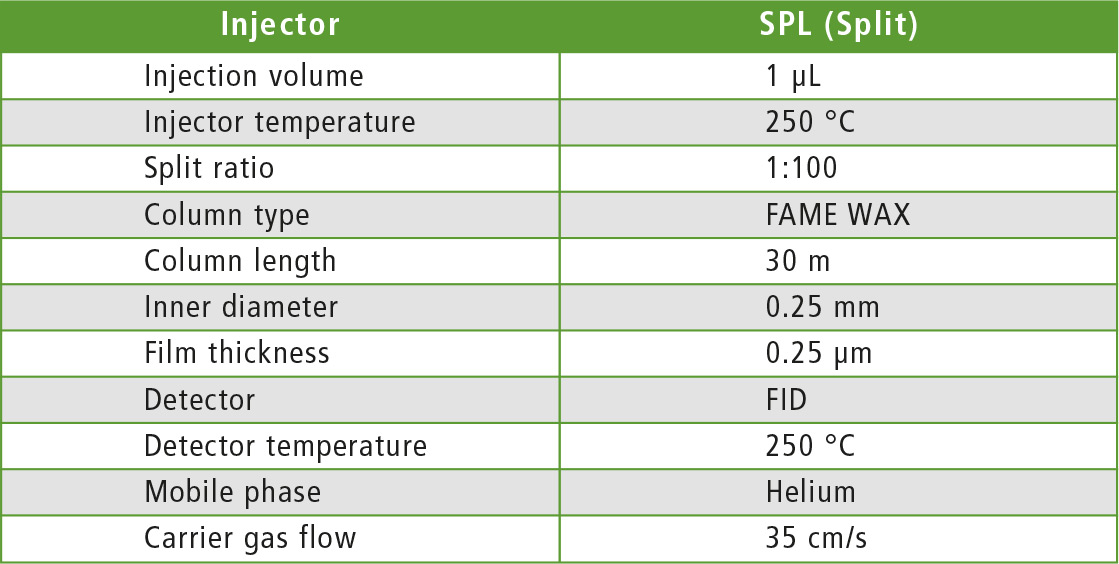 Table 1: Parameters for GC analysis of the FAMEs using a GC-2010 Plus instrument

The 37-component FAME mix from Supelco company was used for identification. The GC method applied was able to separate all FAMEs present, except for the cis/trans isomers of oleic acid (C18:1). Figure 4 shows the chromatogram of the FAMEs present in a sample of infant formula powder.

Figure 4: Chromatogram of the FAMEs from infant formula powder using the microwave method

The peak areas have a linear relationship with the mass fractions so that summation over the peak areas enables determination of the percentage fractions of the saturated and unsaturated fatty acids. The microwave method for the infant formula powder (chromatogram) gives a fraction of 41.6 ± 0.12 wt.-% for saturated fatty acids and 58.4 ± 0.12 wt.-% for unsaturated. Figure 5 compares the percentage mass fractions of three samples obtained using the ISO and the microwave methods.

Figure 5: Fractions of saturated and unsaturated fatty acids in potato chips, infant formula powder and salmon determined with the microwave and ISO methods

This shows that the mass fractions of saturated and unsaturated fatty acids obtained with the two methods are in agreement, and the microwave method is thus qualitatively equivalent to the ISO method. This also applies to the sample of potato chips, which contained an enormously high fraction of unsaturated fatty acids.

Some samples, e.g. salmon, gave slight deviations in the ratio of saturated to unsaturated fatty acids. A closer look at the chromatograms of the salmon sample reveals slight differences for both methods. For example, fatty acids C21:0 and C22:6 were not found using the microwave method, in contrast to the ISO method. Further investigations are necessary in this context. 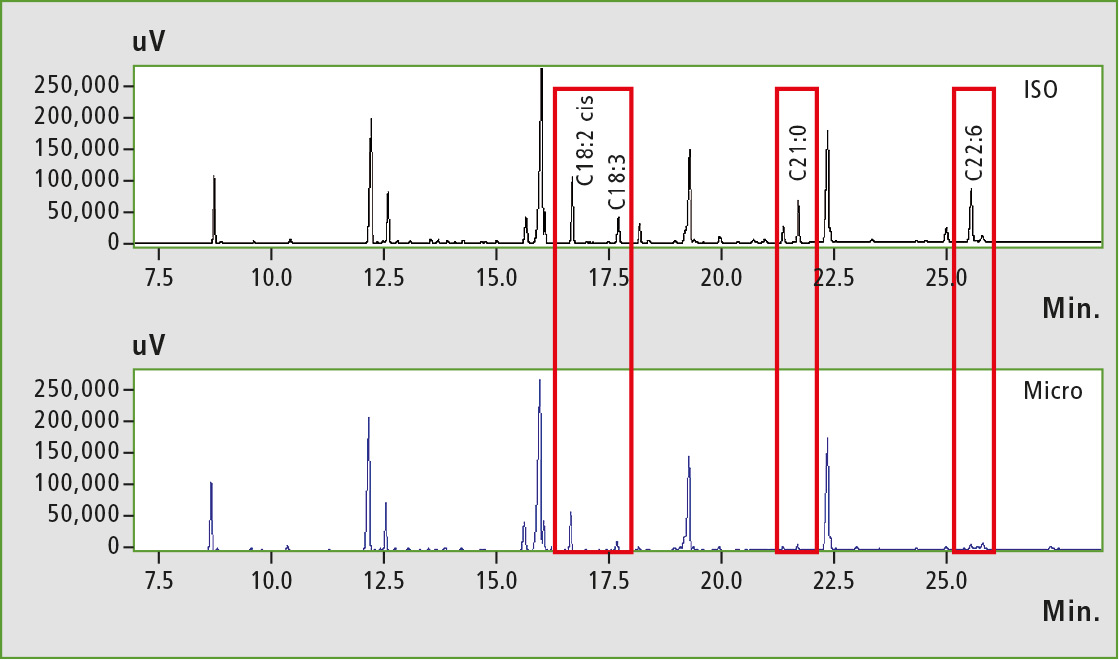 GC-FID is a simple way of determining saturated and unsaturated fatty acids in foods. For sample preparation, the microwave method of extracting fatty acids in foods can be used as the basis for analyzing a wide range of food samples. Compared to conventional ISO methods, it saves resources with respect to both chemicals and time and also gives comparable results.