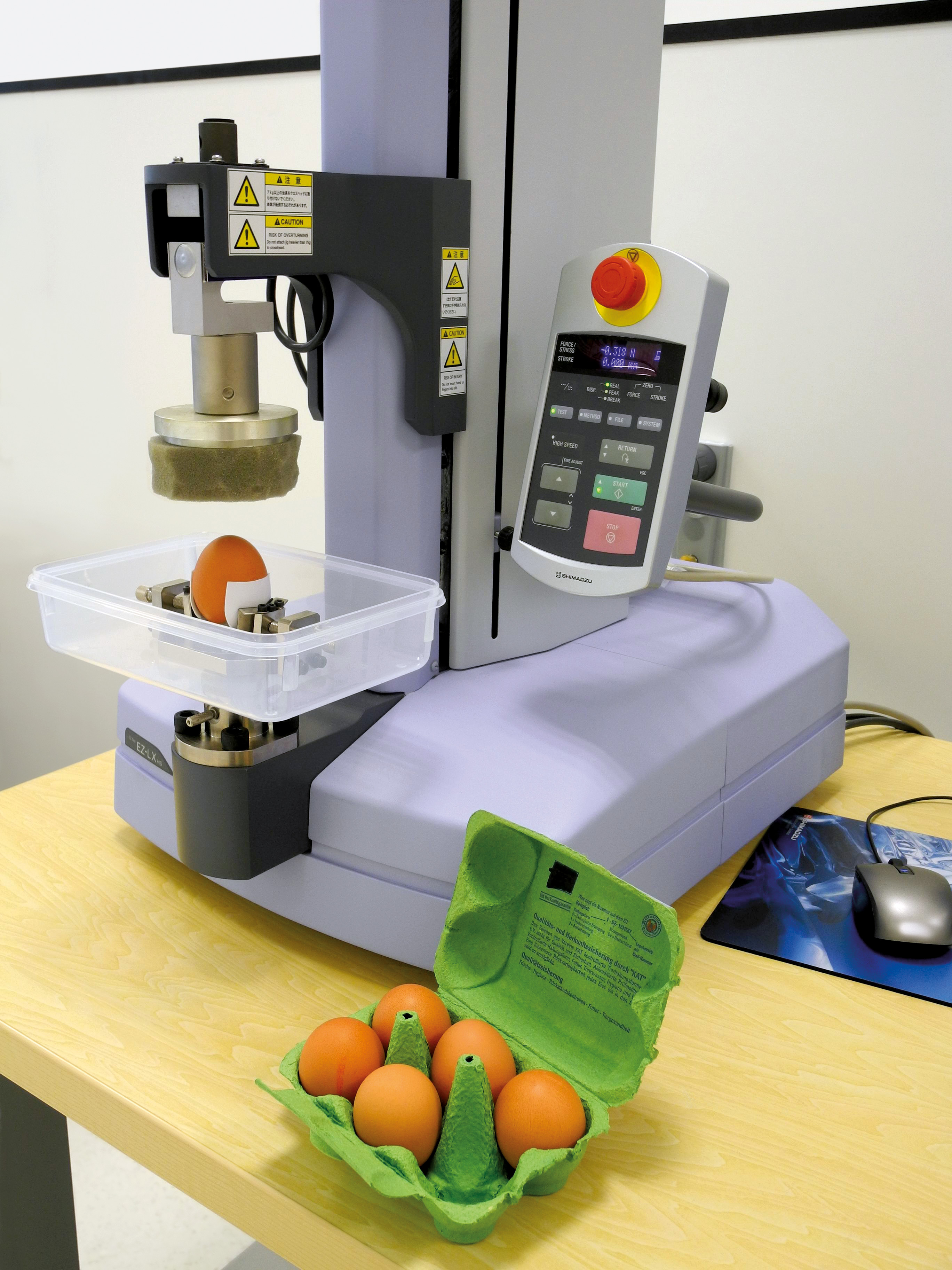 Foods as a basic need of human existence are subject to constant inspections. The Shimadzu News regularly reports on new analytical capabilities.

In addition to taste and the inspection of ingredients, questions are always raised on the physical properties of our food: how quickly does our bread get stale? How crisp are our sausages? What are the differences between eggshells originating from different egg farming methods? … These are the questions that will be addressed in this and in subsequent issues of the Shimadzu News – using the foods that make a continental breakfast.

This high level of consumption requires a high production rate, which can only be attained by keeping high populations of laying hens in egg farming systems. Ever since the ban on battery cages, a change in mindset has been triggered with respect to egg production, and the number of production facilities for organic eggs or free-range eggs is increasing. What is the influence of egg farming methods on the product itself?

The eggshell could be used as an index for natural egg farming methods, since it can be assumed that due to better animal welfare conditions, eggs may grow at a slower rate, and in turn the eggshell can absorb more calcium and thus may be stronger.

The rigidity of eggs from various egg farming methods have been compared. Eggs were obtained from a random supermarket and were subjected to a pressure test using the EZ-Test-X Texture Analyzer. The eggs were from barn-raised, free-range and organically raised laying hens as well as from free-range laying hens that received special grain feeds. All eggs were clamped in the testing machine and compressed at a constant crosshead movement until the break. To level possible natural unevenness of the shell, the bottom support surface as well as the bottom of the pressure plate was covered with a 40 mm thickness foam board.

All test measurements were carried out on raw eggs as well as eggs that had been hard-boiled for ten minutes.

Table 1 shows inconsistent values. While there were hardly any differences between the values for boiled and raw barn-raised eggs and free-range eggs, the values between raw and boiled organic eggs and for grain-fed eggs increased significantly.

Also the strength profiles between the individual egg farming methods were not as expected. While eggs produced according to increasingly more ecological farming methods, have harder shells when boiled, this was not the case for raw eggs. Surprisingly, organic eggs exhibited significantly lower values than free-range eggs.

Consequently, it cannot be concluded that the egg farming method has a significant influence on the eggshell. However, it must be noted here that organic eggs exhibited the lowest measured value fluctuations and the most uniform break patterns.

*Those of you who cannot wait for the next breakfast test, the entire text can be downloaded in advance. www.shimadzu.eu/breakfast-test