Determination of organic acids in wine

Organic acids contribute greatly to the composition, stability and organoleptic qualities of wine, especially white wine. Their preserving properties enhance microbiological stability. So dry white wines not subjected to malo-lactic fermentation are more stable in terms of potassium hydrogen tartrate and calcium tartrate precipitation. Red wines are stable at lower acidity levels due to the presence of phenols.

Since the composition of the organic acids directly influences the flavor and color of wine, it must be controlled carefully to ensure proper fermentation and to prevent spoilage (table 1).

Table 1: Reasons of interest of organic acids in wine

The Union of Agricultural Cooperatives of Peza in Greece is located in the prefecture of Heraklion, Crete. Its main products are wine and olive oil. By collecting high quality raw materials from local producers, the Union of Agricultural Cooperatives of Peza Crete ensures excellent quality of these traditional products for its customers. The red wines have P.D.O. Peza (Protected Designation of Origin Peza) status since 1971, and the white wines have had this status since 1982.

In collaboration with N. Asteriadis S.A., the Peza Union Crete has developed in its quality control laboratory a green, fast HPLC method for the determination of organic acids in wine based on research of the University of Calabria [1]. This method requires no hazardous organic solvents. In addition no buffers are used, thereby eliminating the need for additional time to clean the HPLC system.

The analyses were performed on a Shimadzu prominence HPLC system equipped with a PDA detector (SPD-M20A). Chromatographic separation was achieved on a 250 mm x 4.6 mm, 4 µm Phenomenex Synergi Hydro-RP column (table 2). Detailed analytical conditions are presented in the following paragraph:

The goal was to select a column that could operate at 100 % aqueous conditions without the need for phosphoric buffer addition. Using water as a mobile phase makes initial equilibration faster and total time of everyday analysis shorter, as it eliminates the additional time needed to clean the system from unwanted salts. In addition, a mobile phase compatible with a LCMS detector and an ESI probe was tested since this instrument is included in the Union’s future plans. Formic acid was selected because of its appropriate properties. Two different concentrations (0.1 and 0.5 % formic acid) were tested and the best separation was obtained at 0.1 %. This is in agreement with a previous study conducted by Gamoh et al [2].

Polar analytes are not always retained and often do not separate with a satisfactory capacity factor on conventional C18 columns. Synergi Hydro-RP is a C18 bonded phase endcapped with a polar group to provide extreme retention of both hydrophobic and polar compounds under 100 % aqueous conditions. The high 4 µm silica surface area (475 m2/g) combined with a dense bonded phase coverage allows substantial interaction between the sample analyte and the bonded phase. The result is a very retentive C18 phase, well suited to separate organic acids.

Running a 100 % aqueous mobile phase on a C18 column can provide improved retention of polar compounds. However, conventional C18 phases are poorly wetted by highly aqueous mobile phases, causing the C18 ligands to mat down on the surface of the silica with the consequence that over time, retention is lost completely. Organic acids are often difficult to separate as their polarity hinders interaction with conventional C18 ligands, but it was observed that this is accomplished using Synergi Hydro-RP under 100 % aqueous conditions. 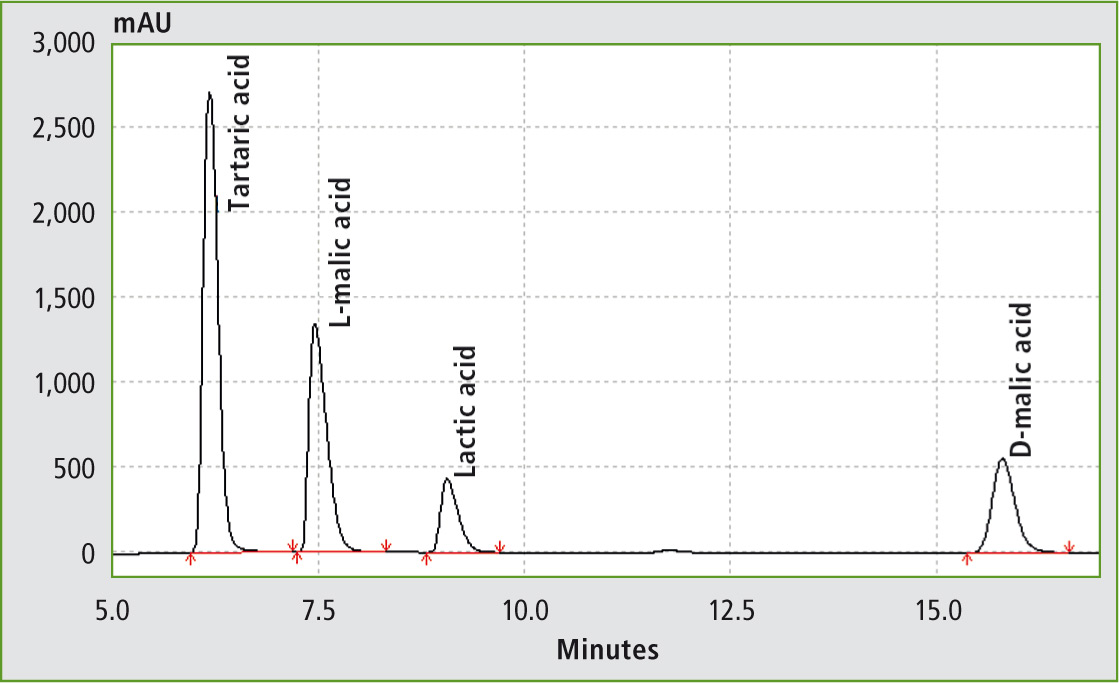 Table 3: Calibration curve slopes ([Organic acid] = a *Area), correlation coefficients and QC parameters for organic acids. Limits of detection and quantitation are calculated by multiplying the residual standard deviations of the calibration curves (Sy/x) by 3.3 and 10 respectively. 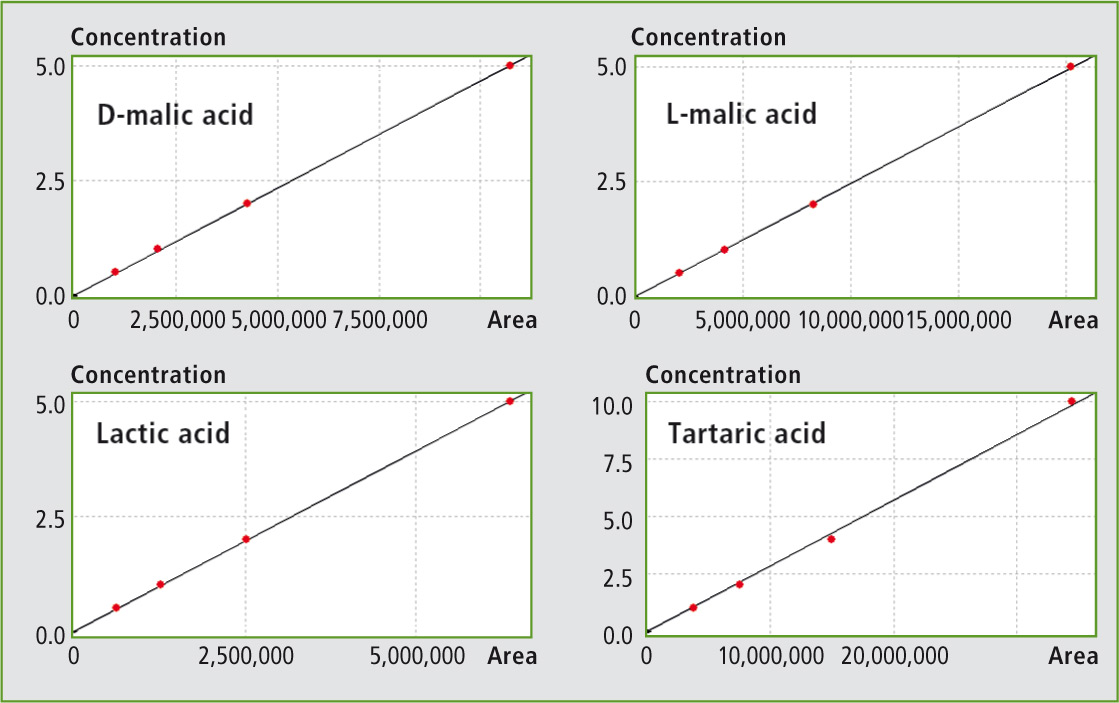 Wine samples were diluted 1:10 with ultrapure water and filtered using 0.45 µm pore size prior to analysis. Because of the dilution, a dilution factor of 10 was used for quantitation. In figure 3, a typical chromatogram of a wine sample is shown. 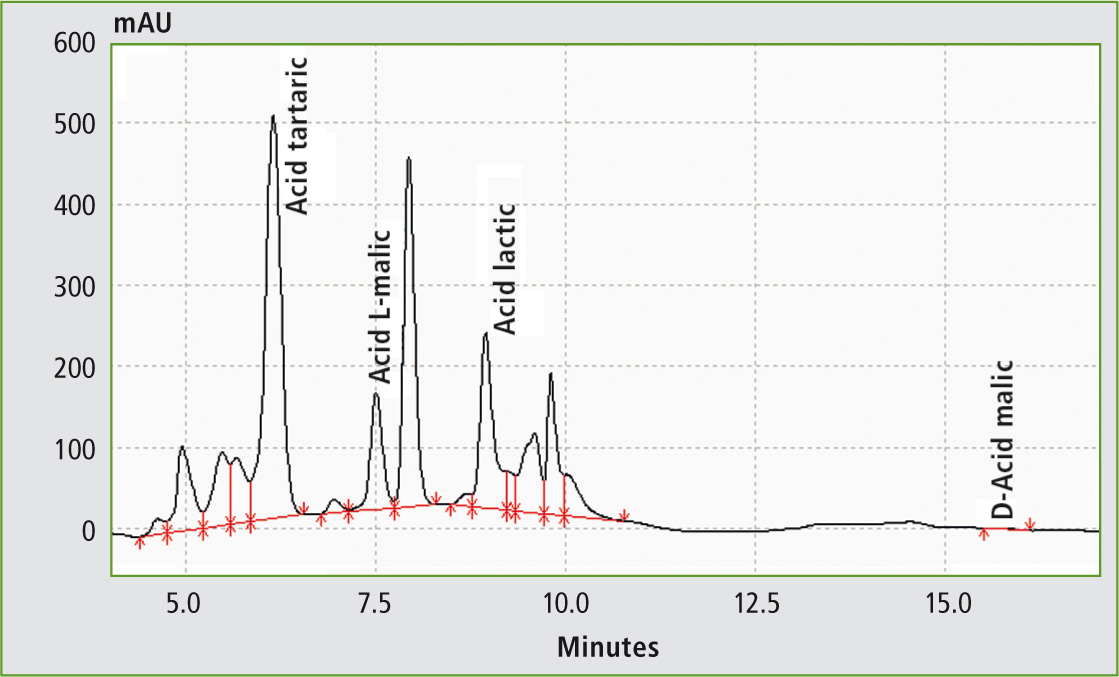 Quantitative results and QC parameters for the most typical wine products are shown in table 4.

Table 4: Quantitative results and QC parameters from some wine samples

The method described above has been developed and successfully implemented in the Union’s Quality Control laboratory. It has proven to be fast and reliable while requiring no organic solvents and minimum time for equilibration and cleaning. Linearity of the calibration curves for all organic acids was excellent in the range of the measurements, providing a solid base for the determination of organic acids in wine. Using a Phenomenex Synergi Hydro-RP column with particle size of 4 µm proved to be an excellent choice for this type of analysis. This method, although developed using UV detection, is also suitable for LC/MS systems. Using such a system in the future, the Union expects to achieve even better LODs* and LOQs.**