The Tony awards, the Goya or Molière prizes, Polish or German Film prizes, Academy awards, Golden Globe awards or the César – they all award prizes for best supporting actors or actresses playing alongside the leading actors and bringing out the best in them. And not just human actors but also robots, such as R2D2 or cars (‘Herbie’) can shine in supporting roles. 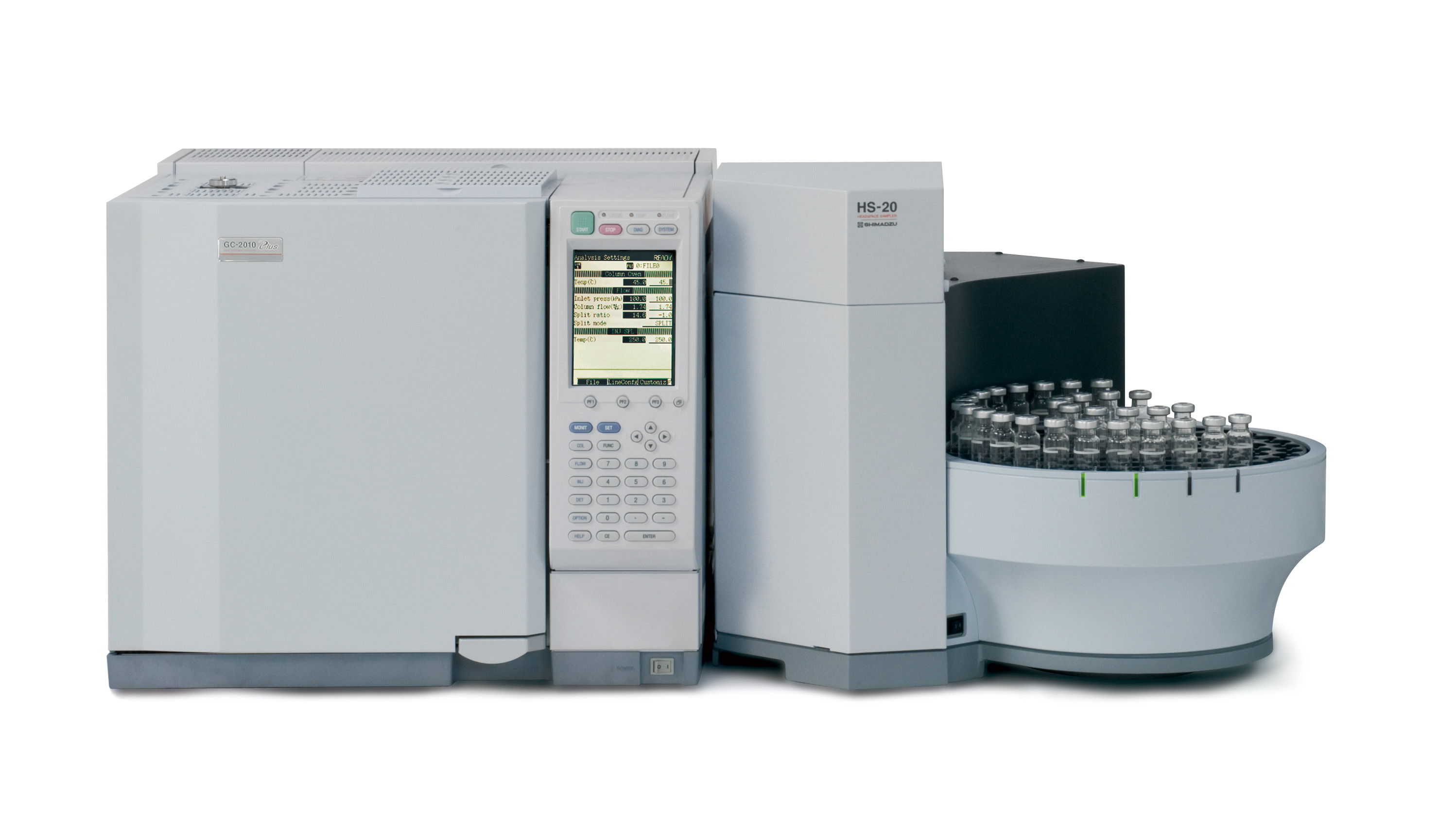 What is true for theatre and film also applies to technology: in analytical instrumentation, the leading systems unfold even more of their full potential when paired with high-quality peripheral systems. A new actor on the analytical scene is the HS-20 headspace autosampler, supporting GC analysis (Figure 1).

In headspace analysis, samples are typically heated in 10-20 mL gas-tight sample vials. Depending on the nature of the sample (matrix), volatile substances diffuse into the gas phase. When a defined volume of this gas phase is withdrawn and subsequently injected into a gas chromatograph, the results allow conclusions to be drawn on the composition of the actual sample.

Headspace techniques (HS) are especially popular for samples that cannot be measured via gas chromatography without prior sample preparation. Examples are traces of organic compounds on solids, for instance fire accelerants on building components, or odor-intensive substances in plastics, residual solvents in drugs, but also drinking water. 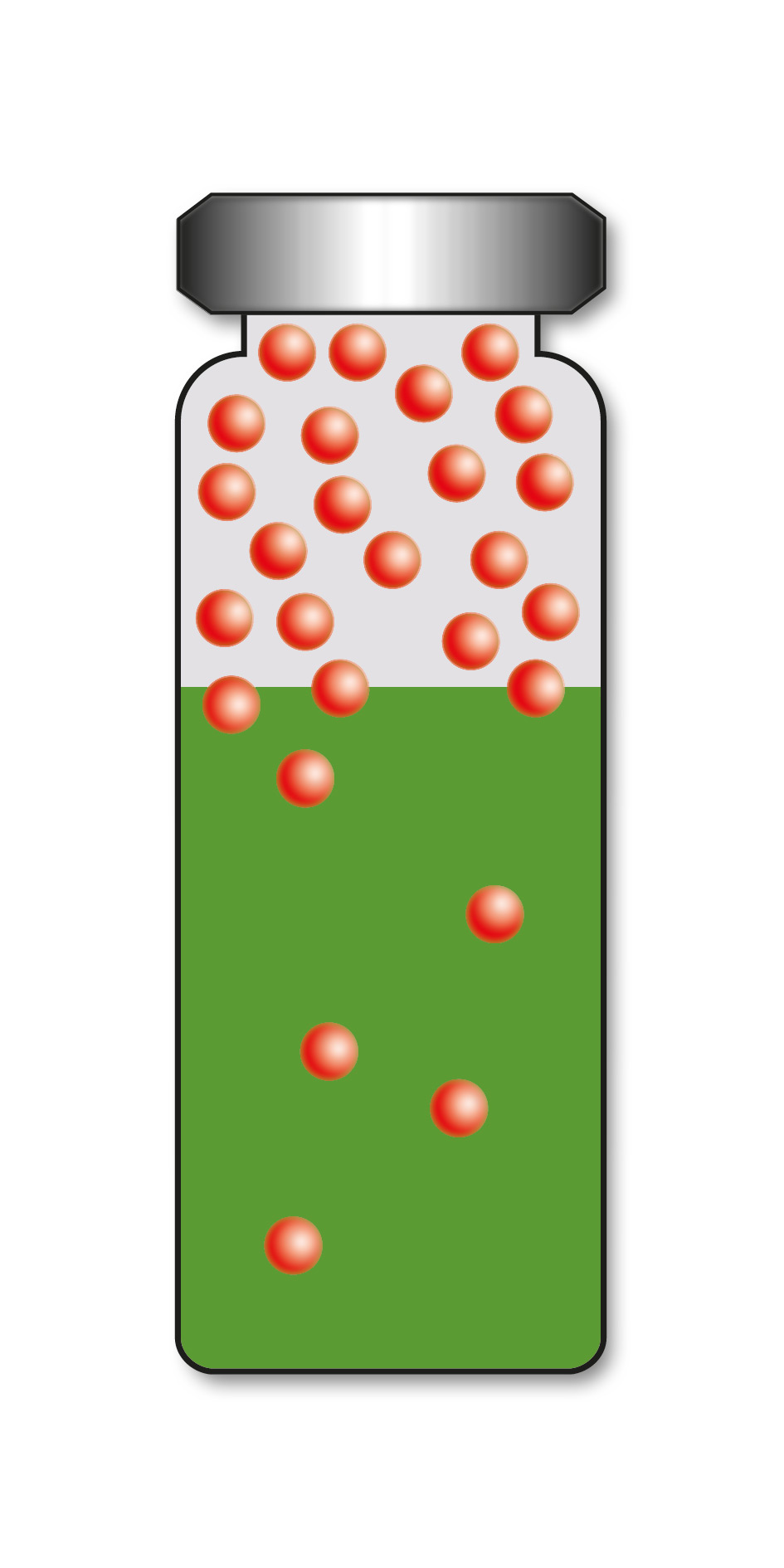 In this way, headspace analysis can significantly decrease detection limits. The concentration equilibrium of a component between the liquid or solid and the gas phase is essentially influenced by the incubation temperature and the matrix, i.e. the chemical composition of the liquid or solid phase (Figure 2).

Another advantage of HS versus sample extraction is its complete automation, in which modern HS autosamplers enable highly complex and very detailed and controllable sample preparation. As the gaseous sample comes into contact with a variety of surfaces in the autosampler’s sampling system, deactivation of these surfaces is essential in order to meet the high analytical demands of trace analysis.

The HS-20 headspace sampler sets new standards in meeting of these demands. Designed as ‘transfer line HS system’ it complements the syringe-based HS AOC-5000 Plus sampler. While the latter allows a flexible choice of injection techniques (liquid, headspace, solid-phase micro-extraction [SPME] and in-tube extraction [ITEX]), the HS-20 is firmly connected to the GC system via a transfer line, offering better precision and more headspace analysis options. 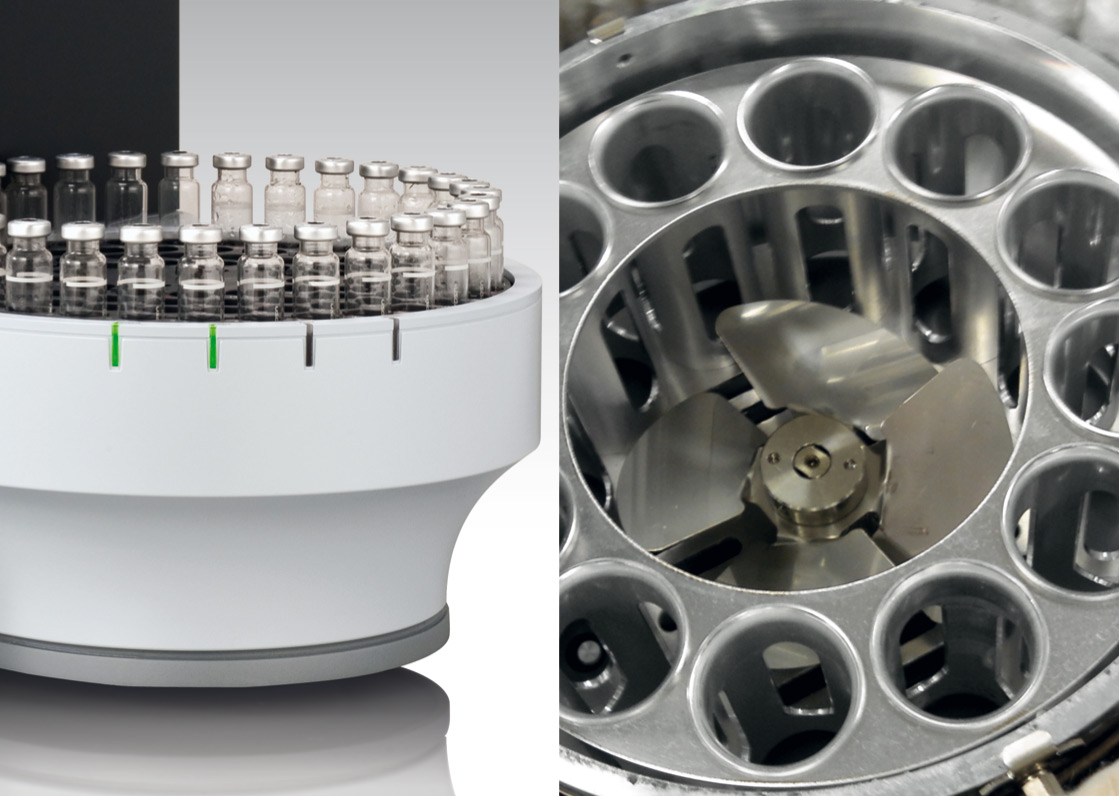 A large incubation oven allows simultaneous sample preparation of up to twelve samples. It is furnished with a sample tray holding 90 samples (Figure 3), where 10 and 20 mL HS sample vials, screw or crimp vials can be placed in any order. For rapid gas phase equilibration, the samples are shaken during incubation. The incubation temperature of the oven can be set to up to 300 °C and kept constant using an air circulation system (similar to a GC oven). An incubation time of up to 1,000 minutes is possible.

The inert transfer line, optimized for connection to Shimadzu’s GC-2010 series, enables transfer of high molecular weight as well as surface-active substances to the GC system with superior recovery rates and reproducibility (Figures 4 and 5). All lines in the HS-20 with direct sample contact can be heated up to 300 °C – the transfer line optimized for the GC-2010 can be heated to 350 °C. This enables a 100 % recovery rate for the usual test with n-alkanes up to C24. 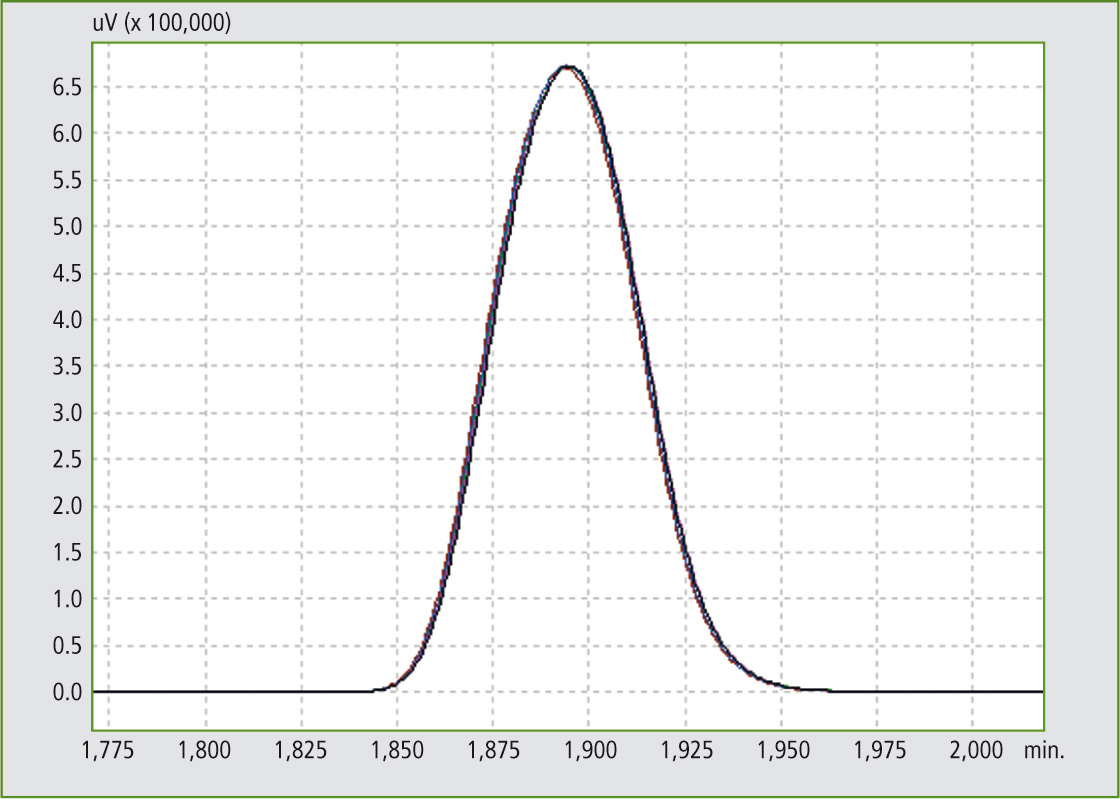 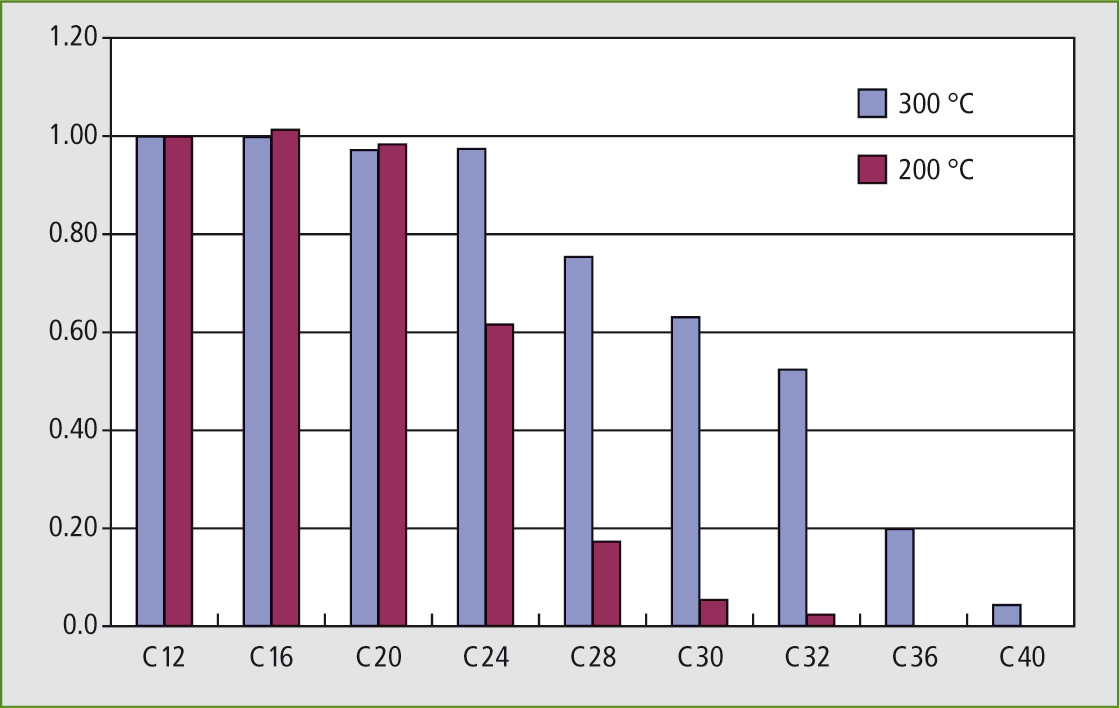 Figure 5: HS-20 recovery rates as a function of incubator temperature

But beyond this, the HS-20 sets new standards as evidenced by the recovery rates of over 50 % for n-C32. Further proof of the inertness of the HS-20 is the very low carry-over rate for surface-active substances, for instance a carry-over of less than 0.0001 % for 1,3-dimethyl-2-imidazolidinone (DMI) and for acetic acid.

The HS-20 offers a ‘multiple headspace extraction’ (MHE) function for detection of matrix effects or quantification of volatile components in solids (i.e. plastics). Up to 10 headspace extractions per vial are possible. Volatile components can be quantified from the decrease of the peak areas from extraction to extraction. Essential here is constant pressurization of the vials. Prior to each measurement, the sample vial is pressurized to a predetermined pressure using an inert gas, essential to attain accurate results in MHE – and also a factor for good reproducibility in conventional HS analysis. For pressurization, the HS-20 uses the proven electronic pneumatics of the GC-2010.

The HS-20 is available in several versions. In addition to the standard model, a ‘HS-20 Trap’ version is also available. This model allows enrichment of multiple extractions from one sample vial onto a cold trap filled with an adsorbent (e.g. Tenax TA) for the detection of low trace amounts. The trap is cooled down to -30 °C using a Peltier element, which enables freezing of the multiple extracts obtained from one sample vial and subsequent focused transfer onto the separation column via rapid heating. Using repeated extraction, the amount of sample used in the analysis can be significantly increased, opening up new possibilities especially for trace analysis.

The software directs the analysis 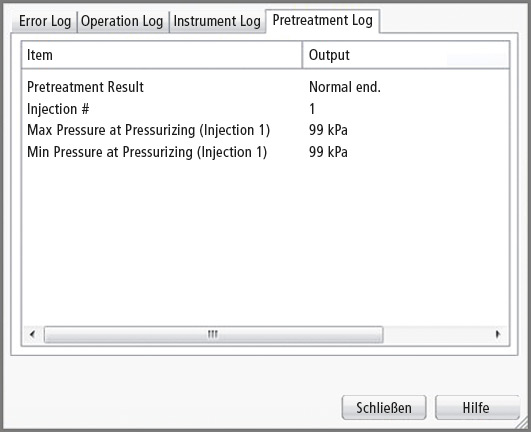 Figure 6: Results of the internal HS-20 diagnostics. Comparing the ‘maximum pressure’ immediately following pressurization to the ‘minimum pressure’ after a set waiting period for reaching equilibrium does not reveal any difference. This demonstrates that the vial was closed properly.

The HS-20 can be controlled easily via the supplied software. Alternatively, drivers can be integrated within the GC software packages (for instance LabSolution). In this case all parameters of the autosampler method, along with the GC method, are stored in the chromatogram data file and can be viewed at any time. At the same time, internal diagnostic results of the sampler are also retrievable, for example when checking whether a vial has maintained pressure after pressurization or whether it has been closed properly (Figure 6). Used in combination with Shimadzu’s GC and GCMS systems, the HS-20 trap system signifies the start of a new era in headspace trace analysis.